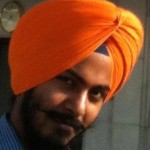 Two of India’s religious shrines in New Delhi, the Sikh Temple & Jama Masjid Mosque, require specific dress codes for visitors. At the Sikh Temple, men and women alike were required to wear a head covering the temple authorities dispensed, which was a bright yellow/gold cotton cloth folded diagonally and tied at the back of the head. 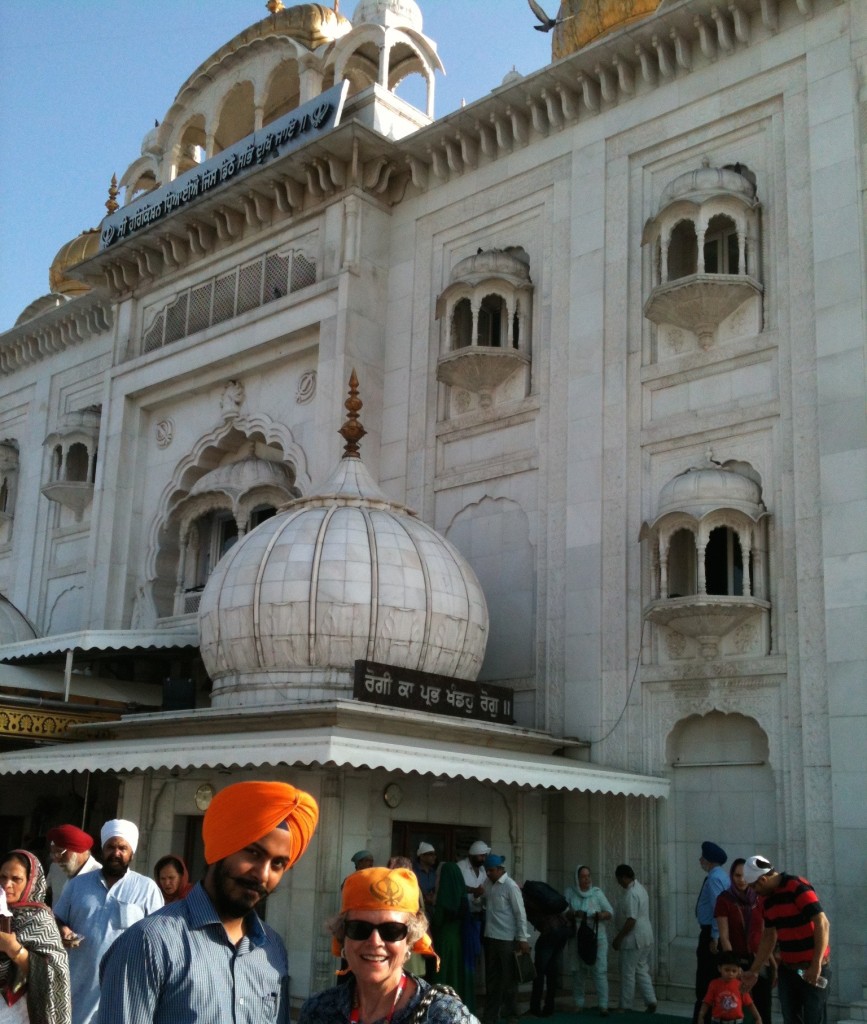 Inside the temple, there was much to admire in the elegant inlay work in the marble and the fine detail throughout the building, but I felt a little embarrassed at our intrusion on the prayers and ceremonies. I guess tourist dollars compensate for all kinds of faux pas, or do they?

Around us on all sides, musicians played and sang religious music and the devout loudly intoned their prayers. I found the aural layering to be nearly overpowering, almost an assault on the senses, and I wondered where to find the quiet calm I associate with the introspective process of meditation and prayer. When I turned the corner, there it was. A large room that had been empty a few minutes earlier was now filled with prostrated bodies in silent prayer.

Dedication to feeding the poor is a distinctive aspect of this particular Sikh Temple. The adjacent kitchen serves a vast number of people every day and is both staffed and supported by the professionals and well-to-do of the city. 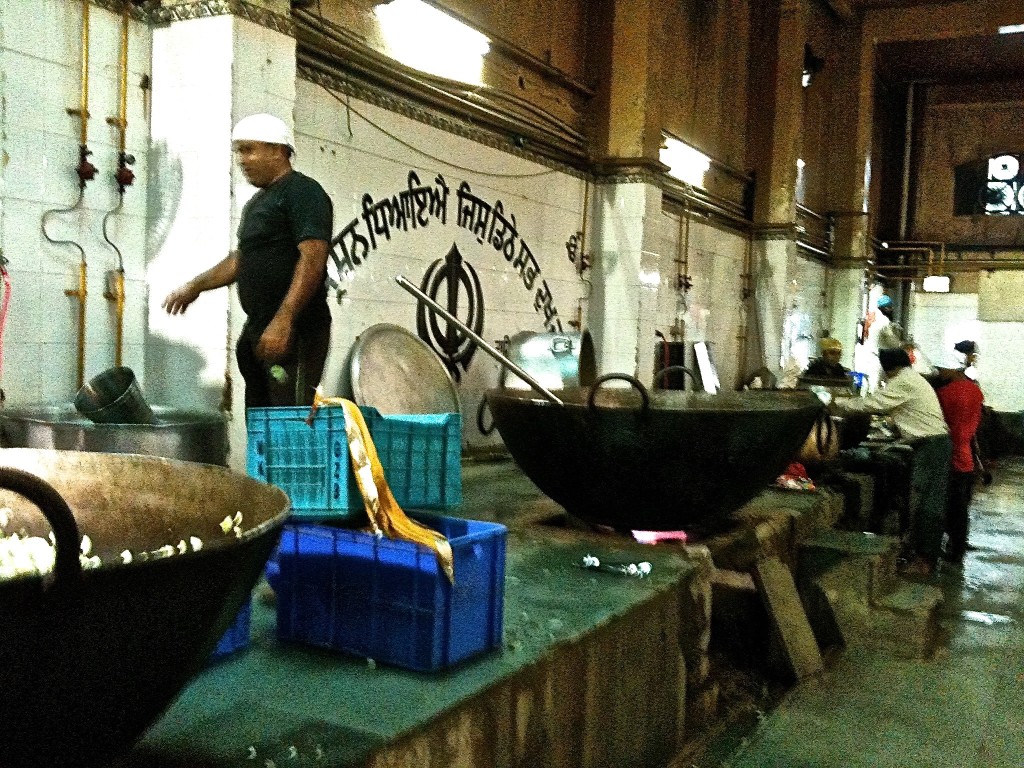 They made no objections to our investigation of their set-up, and good-naturedly allowed us to traipse through their kitchen, past cauldrons of boiling and bubbling liquids that created a very hot work environment indeed. 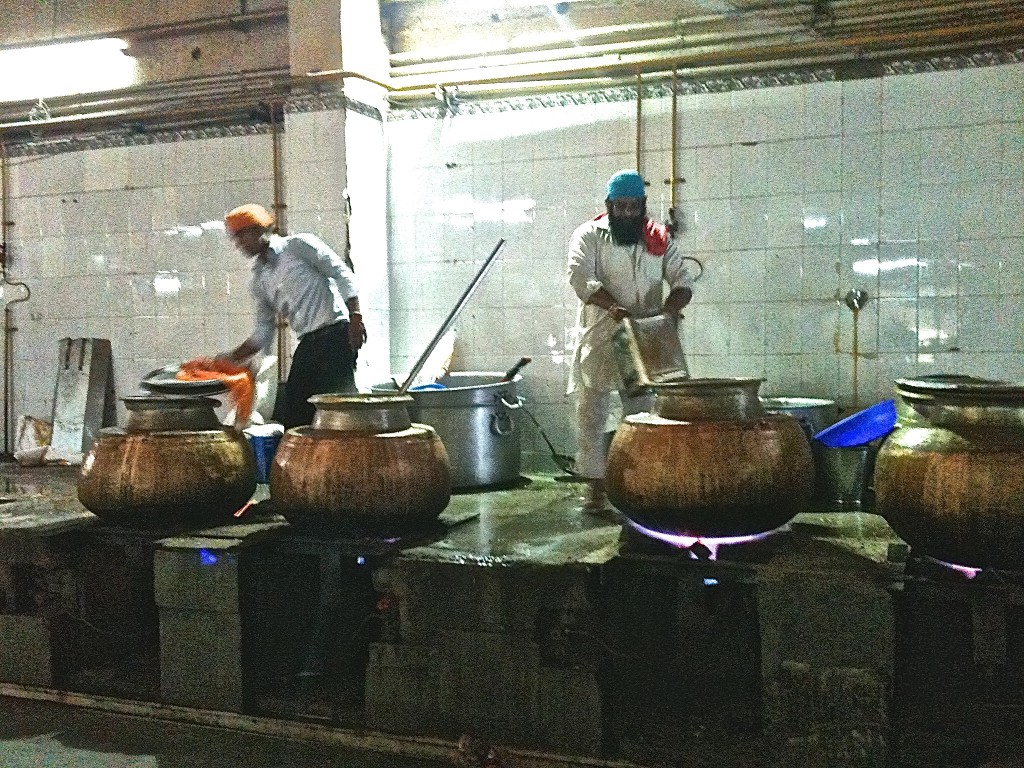 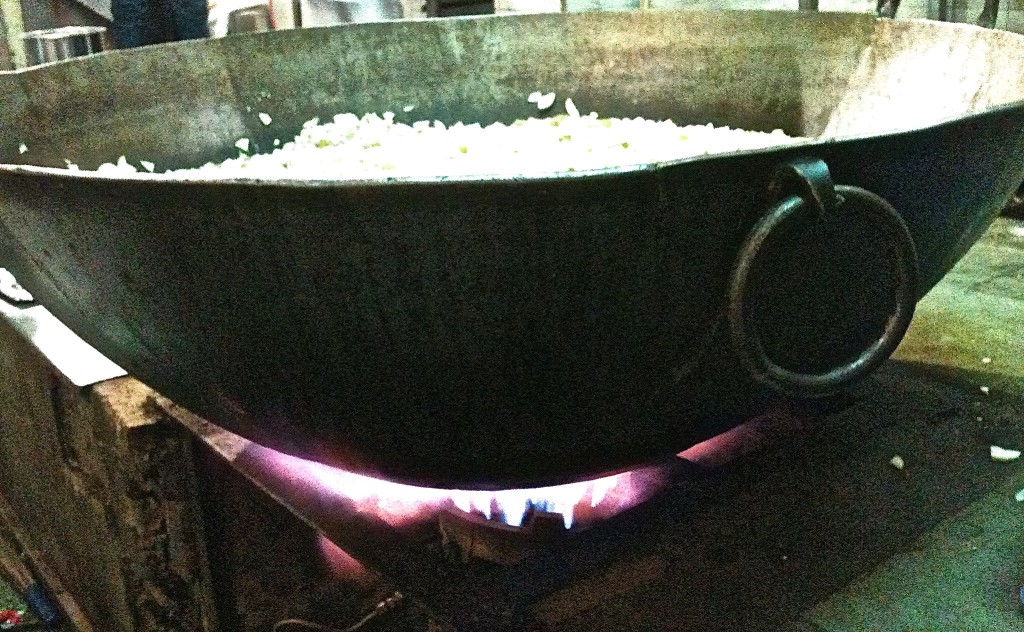 rice pot in the Sikh Temple

The day was hot, the fires were hot, I was hot. The kitchen was unbelievably hot with not a breath of a breeze to ease the temperature, but the workers who donated their time simply did the job that needed to be done. 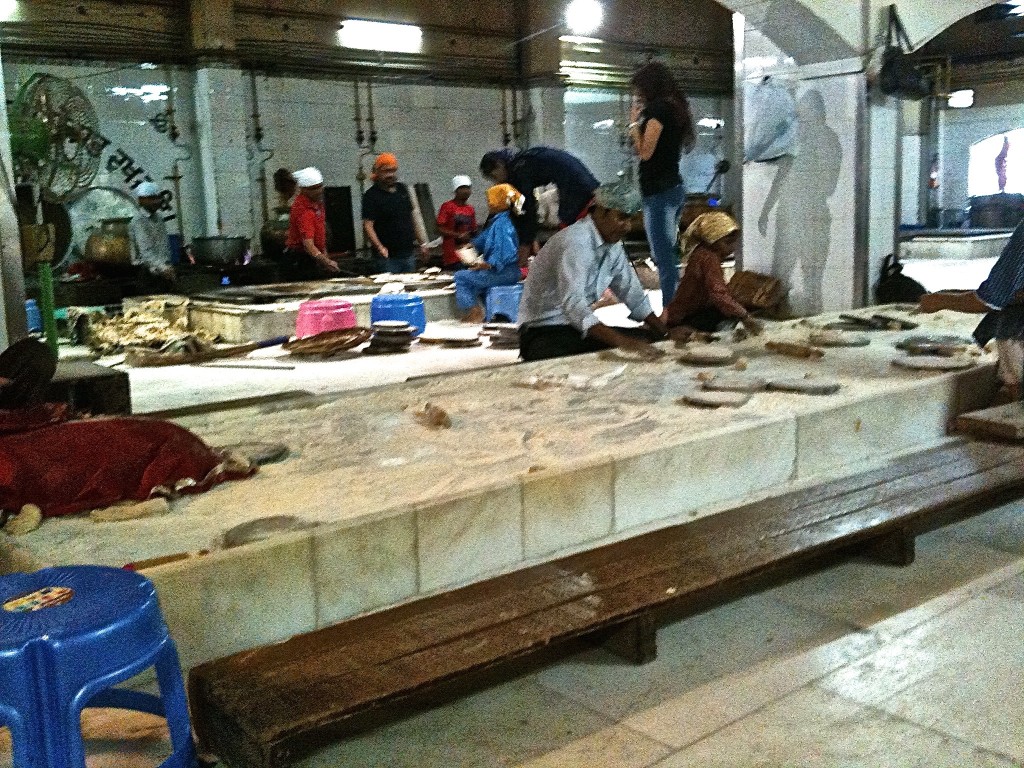 Some of our group wanted to try the cuisine and were assured that the temple policy was to turn no one away. But in the end it seemed the wrong thing to do when there are so many who were actually in dire need.

To be Culturally Respectful at Jama Masjid 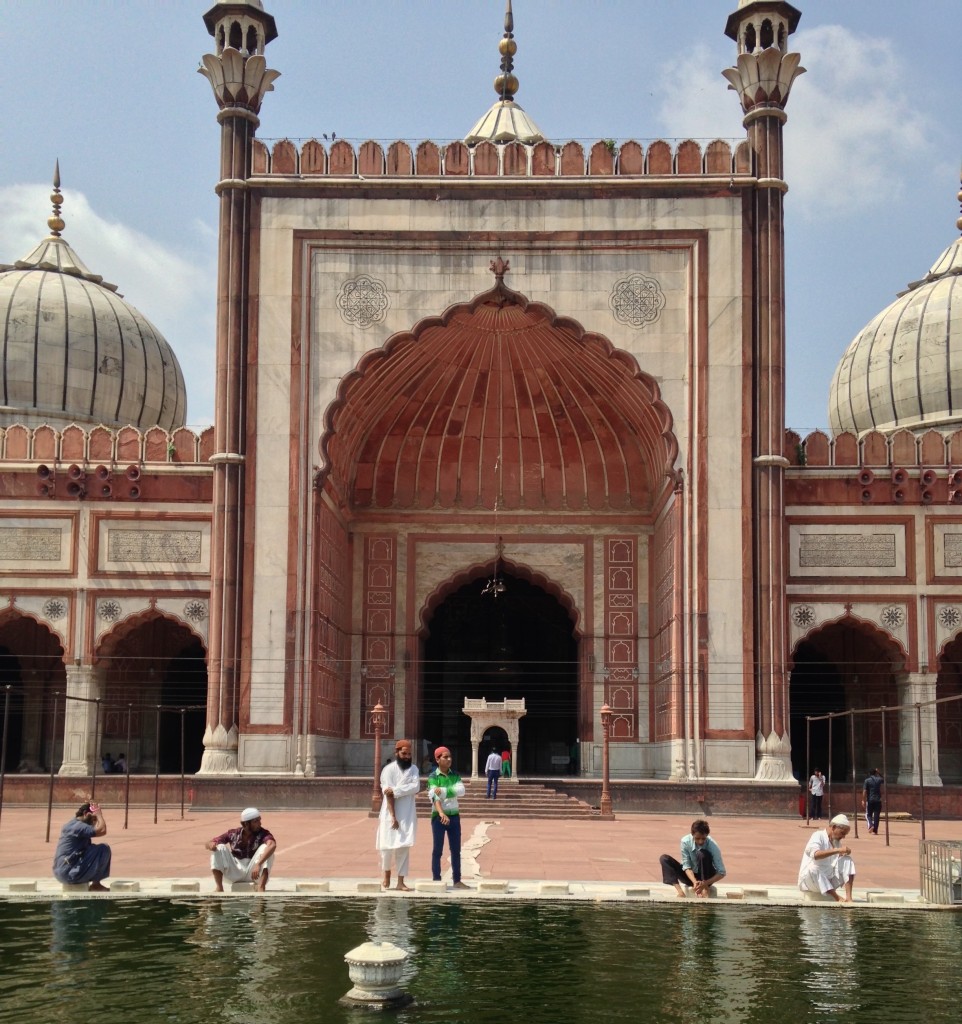 We arrived at Jama Masjid, the largest and best-known mosque in India when the sun was creeping high in the sky. It was hot—hot like I’ve rarely experienced. The rules of the mosque require entrants, male and female alike, to remove footwear and rent cotton print robes covering neck to toe. Aren’t they lovely! It took all of two minutes to realize that, on top of all the rest of our clothes, the added layer was going to make us even hotter. 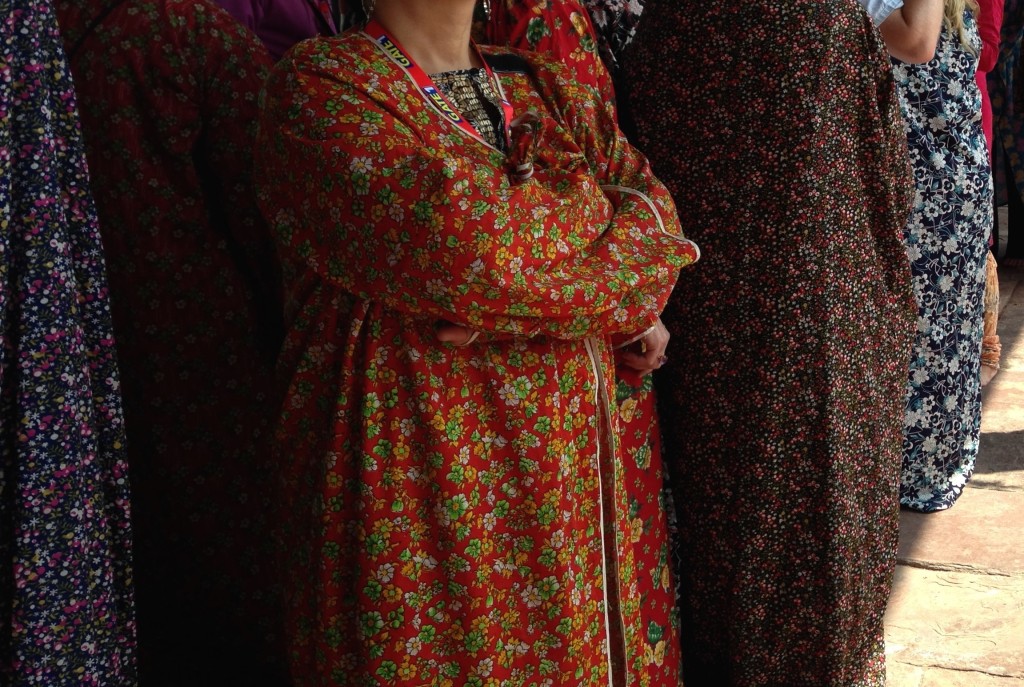 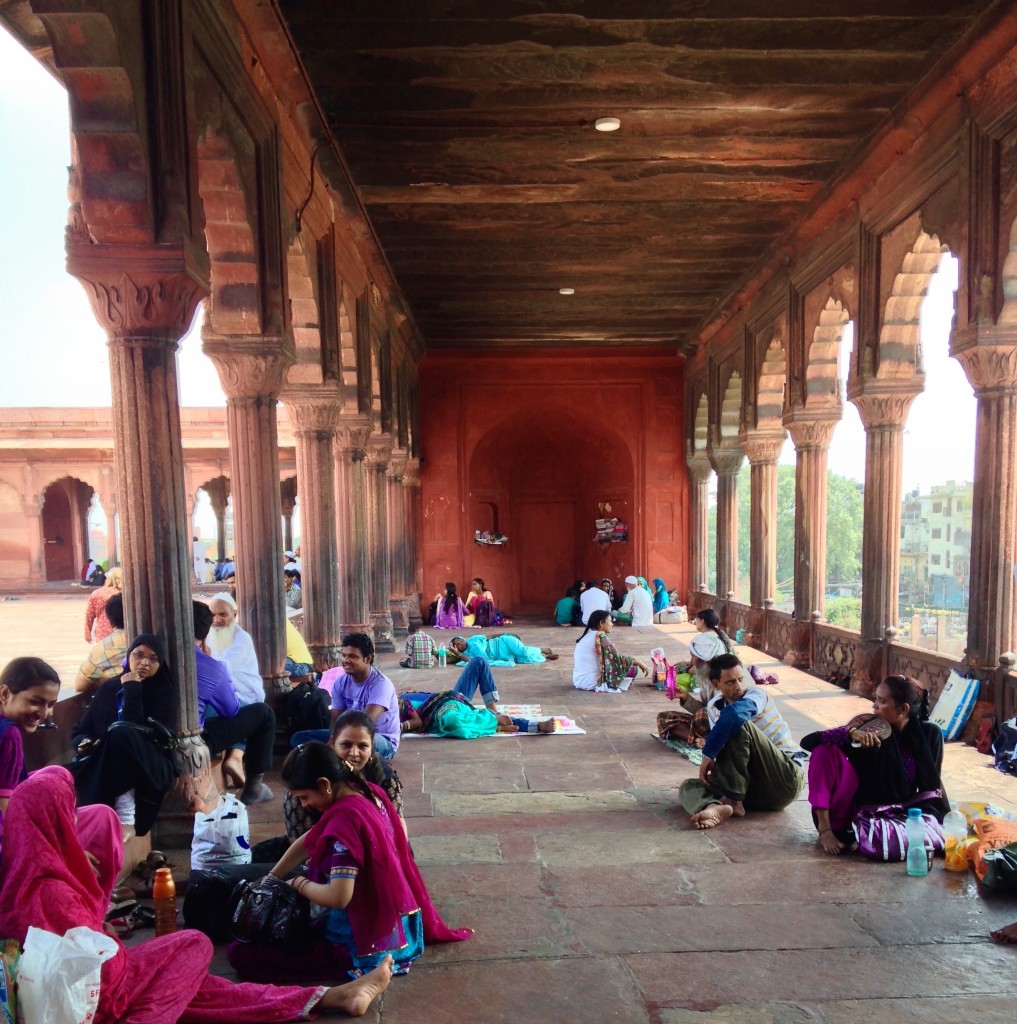 To our dismay, when we entered the mosque, we could plainly see that only the tourists had to wear the additional garments. All the native Muslims were wearing their regular street clothes, which means saris for the women and western shirts and pants for the men. What’s with that? In the US there’d be an outcry about racial profiling. Here racial profiling in a mosque is the norm.

Sisal matting crisscrossed the large main plaza to protect the feet from the hot tiles. Even then, I’d have needed half-inch calluses in order to endure the heat that blistered through that matting. It wasn’t exactly reverent, but pain forced me to trot along quickly toward the shade. 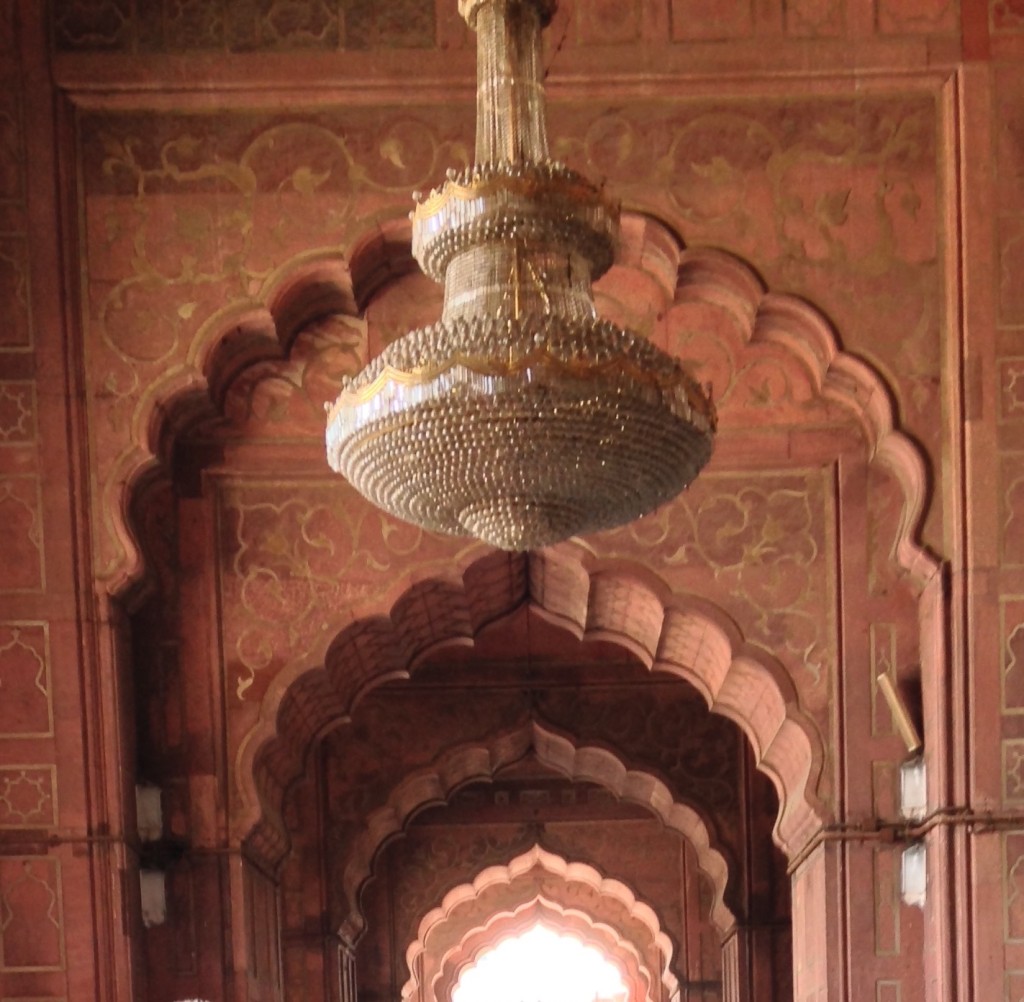 Once we reached the cool portico that ran on all sides of the central square, we could enjoy the beauty of the architecture, including the chandeliers. Anna showed us how the design of the arches echoed the respectful traditional greeting of “namiste,” loosely translated as “I bow to the divine in you,” accompanied by bowing of the head and the hands clasped together, fingers pointing upward. 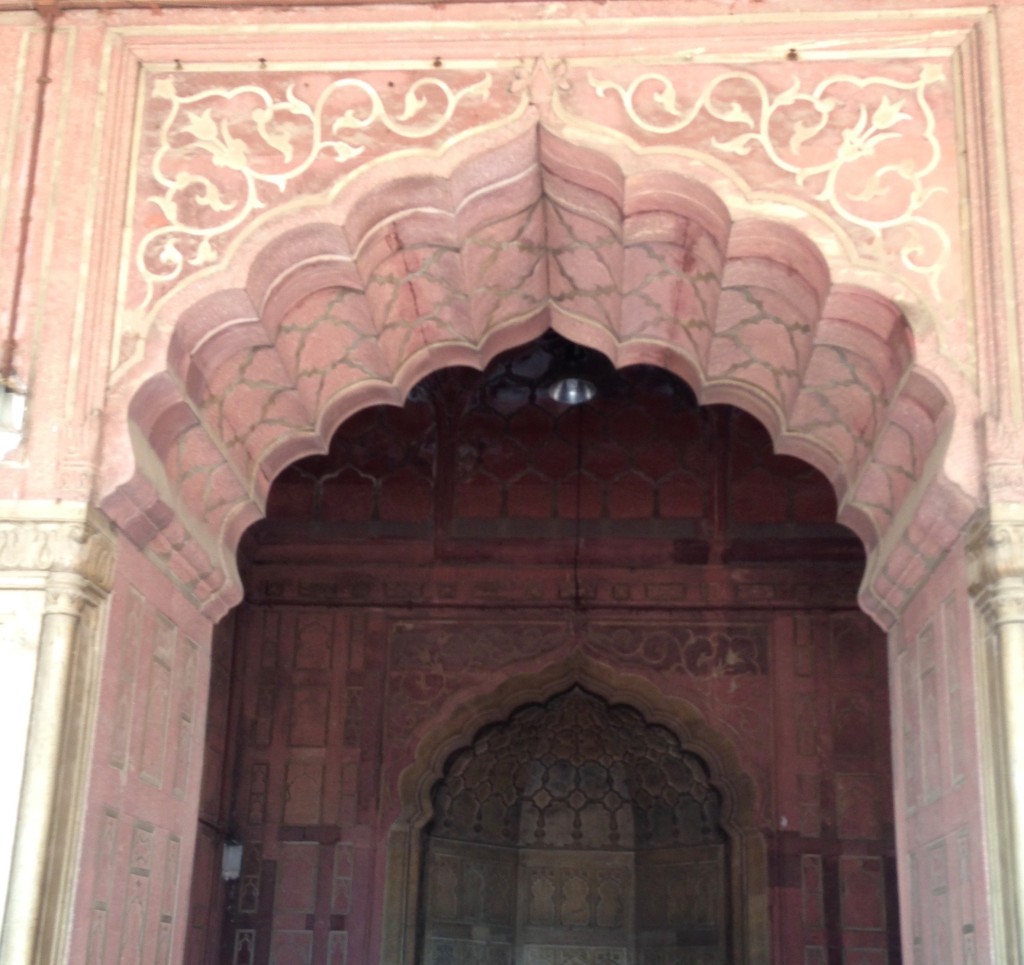 Try it. Place the fingertips of both your hands together in an arch. Then look at the scallops of the arch. See how the pattern of the fingers is replicated in the curves of the architecture?