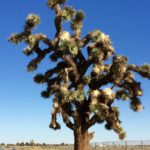 Although we didn’t know it at the time, unusual autumn rain in the desert would cause the Death Valley Super Bloom of spring 2016. Six months earlier–on 5 October 2015 to be precise–we were on a road trip heading to Southern California via ‘Vegas. As we drove south through the Virgin River section of I-15, we found that recent flash floods had washed out most of the highway. Only one lane was open to traffic. Coming through the river gorge, we passed a line of big semi-trucks stacked up for a mile or so on the other side of the wash-out, engines chuffing.

Tedious driving makes a lunch stop particularly pleasant. At St. George we happened on the restaurant, Mad Gyro, and enjoyed delicious gyro and falafel. If we’re ever in the area again, we’ll be sure to stop there. 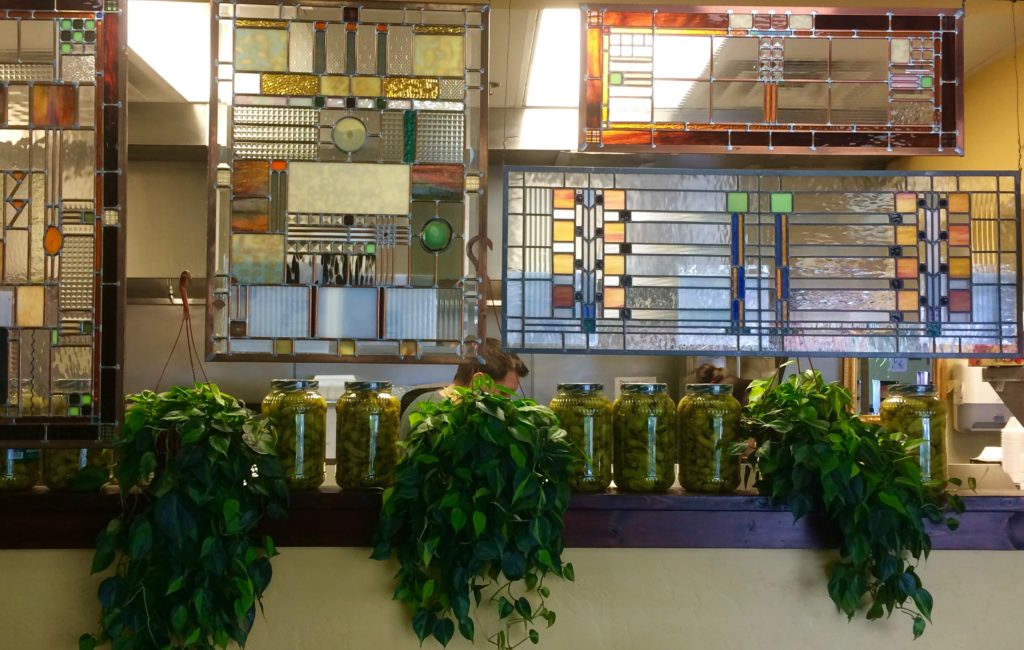 The severe weather wasn’t over. Several warnings about dangerous driving conditions ahead came over the car system as well as our i-Phones. Then more rain near Las Vegas, which gets four inches a year. We were there for a lot of it! Plus, a heavy traffic tie-up because of a toppled rig, which forced us on a detour through the city.

From ‘Vegas, we drove from one cloud burst to another through the Mojave Desert. We tried to find a place to stop and experience the event, but the highway is designed to shuttle visitors quickly along. Apparently the road developers assume that nothing of interest happens in the desert. But we did get to see a huge double rainbow.

Rain in the Mojave Desert

Scent of sagebrush and chaparral

Have you ever experienced the amazing scent of wet sagebrush and chaparral in the mountains? It’s the definition of fresh. How to describe the smell of desert rain? Not pungent, not sweet. It’s delicate, gentle–so light it disappears before being completely sensed. My friend’s mother believed chaparral had medicinal qualities and on occasion brewed a tea from the leaves. Does it? Well, my friend is still alive. But then, that might be another medical miracle not involving chaparral tea.

We encountered another heavy rainstorm from Barstow onward to LA. From there, we experienced almost blinding rain as we entered San Diego. The massive traffic had to slow to a crawl just to stay on the road.

But hey, there are some unexpected side-benefits to being a senior on a road trip. The dusk of seven PM made the headlights of the oncoming traffic from half a dozen lanes look like a wide rhinestone bracelet as it curved around the base of the California hills. Don’t you wish you had baby cataracts too?