What do pirates, amber, and a mighty fine beach have in common? Puerto Plata, that’s what!

It would be difficult to visit this city on the northern coast of the Dominican Republic without encountering all three. Nor would you want to miss any of them. We visited Fort San Felipe built by the Spaniards (1564 to 1573) to protect the community from pirates. At that time, most European nations financed ships flying national flags that sailed for the purpose of pirating other ships. A lucrative form of income, and far less oppressive for their own citizens than tax collection, I suppose. Spain was currently looting the Americas, so every galleon was a prize worth fighting for. 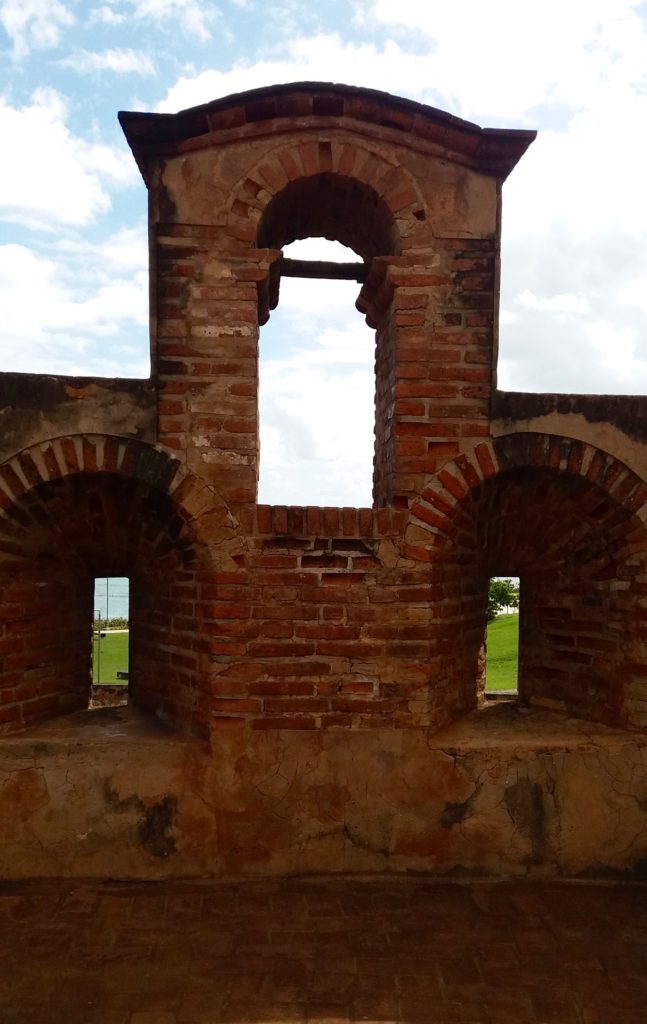 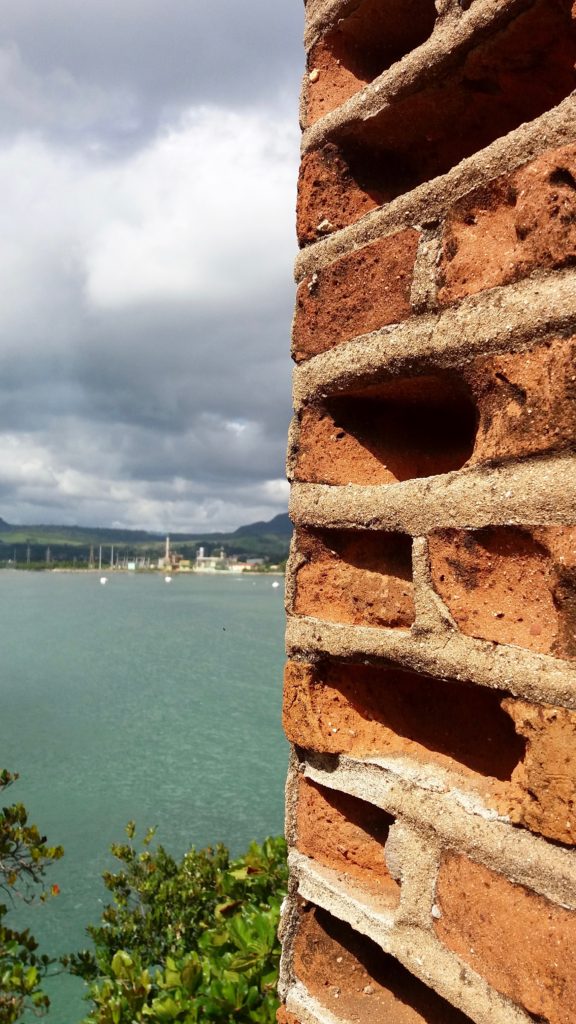 Weathering of the bricks 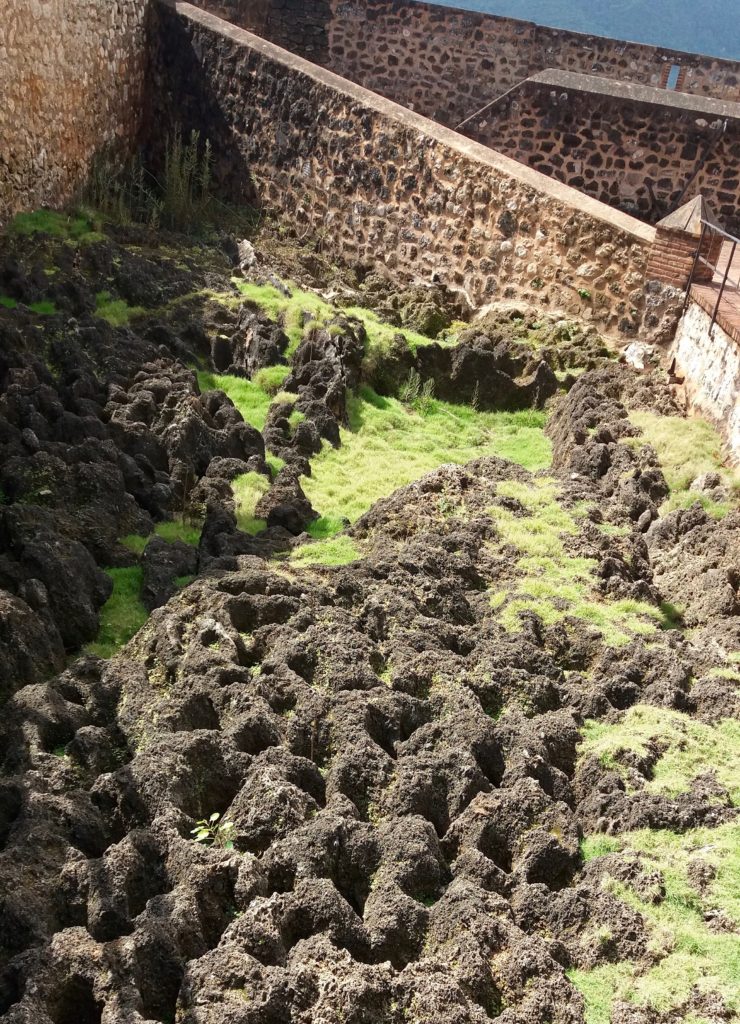 An example of what the Spanish feared actually took place in Santo Domingo 22 years later under the direction of the pirate the British had hired to fill their coffers, [Sir] Francis Drake. He conquered the city, and then burnt one public building after another until the Spanish came up with enough gold and silver to satisfy him. 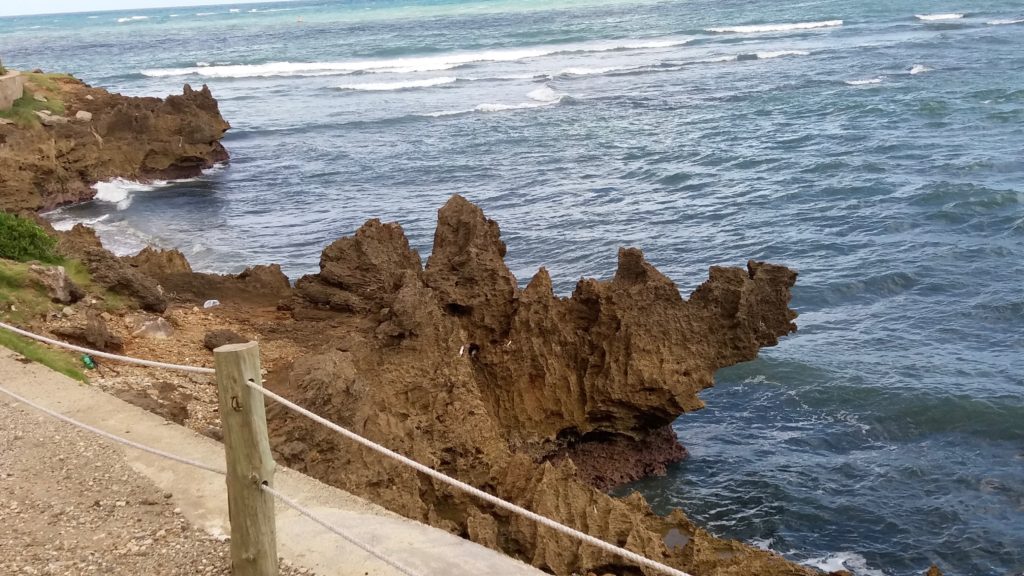 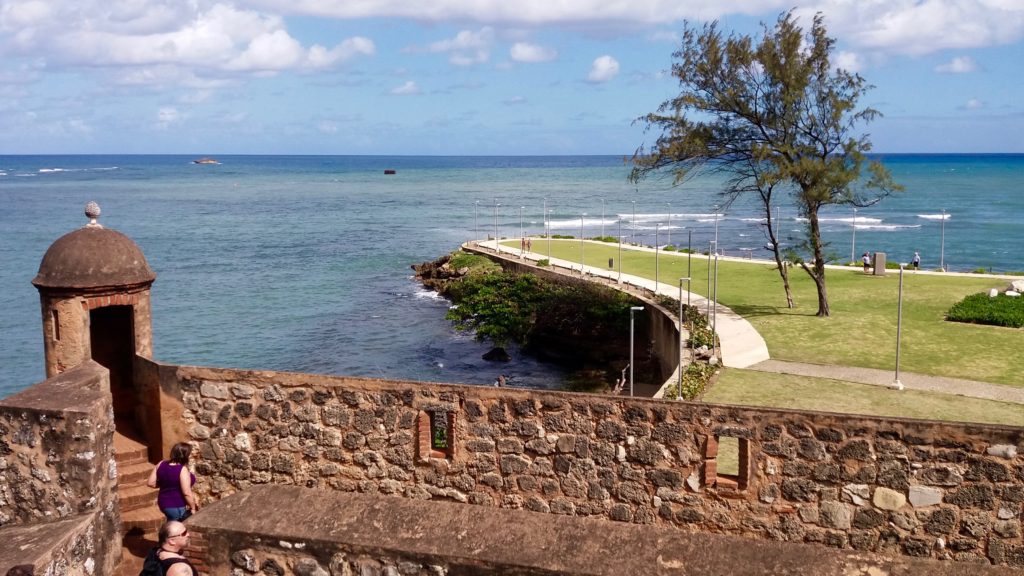 Not much of Fort San Felipe in Puerto Plata remains, and all of the 16th century colonial city that had survived the age of pirates was destroyed during the Dominican Restoration War (about the same time as the US Civil War). We were intrigued by stories surrounding the Parque Histórico La Isabela, which consists of the remnants of a church and colonial village. Tradition has it that Columbus routinely woke his neighbors by blasting the Santa Maria’s foghorn. 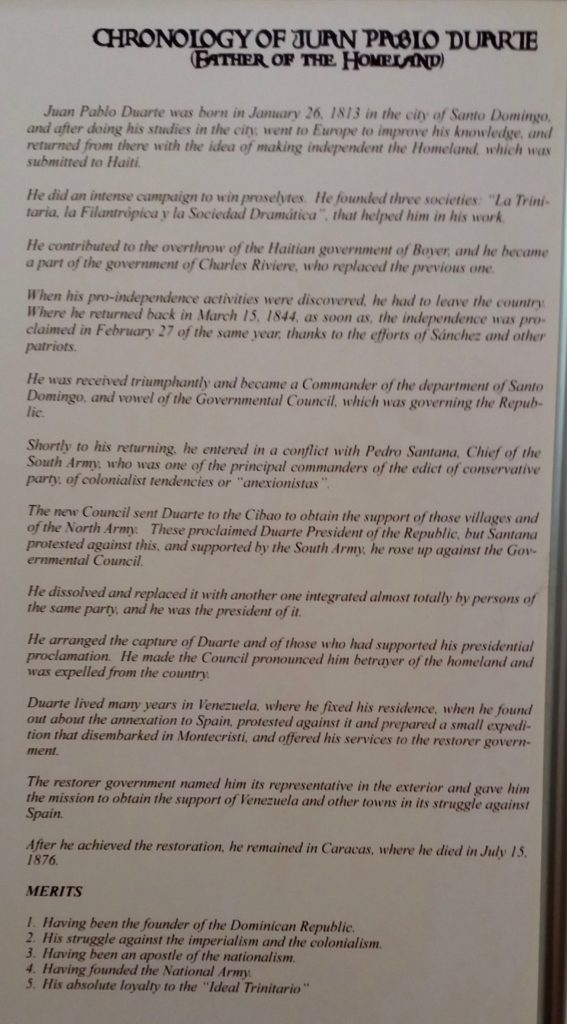 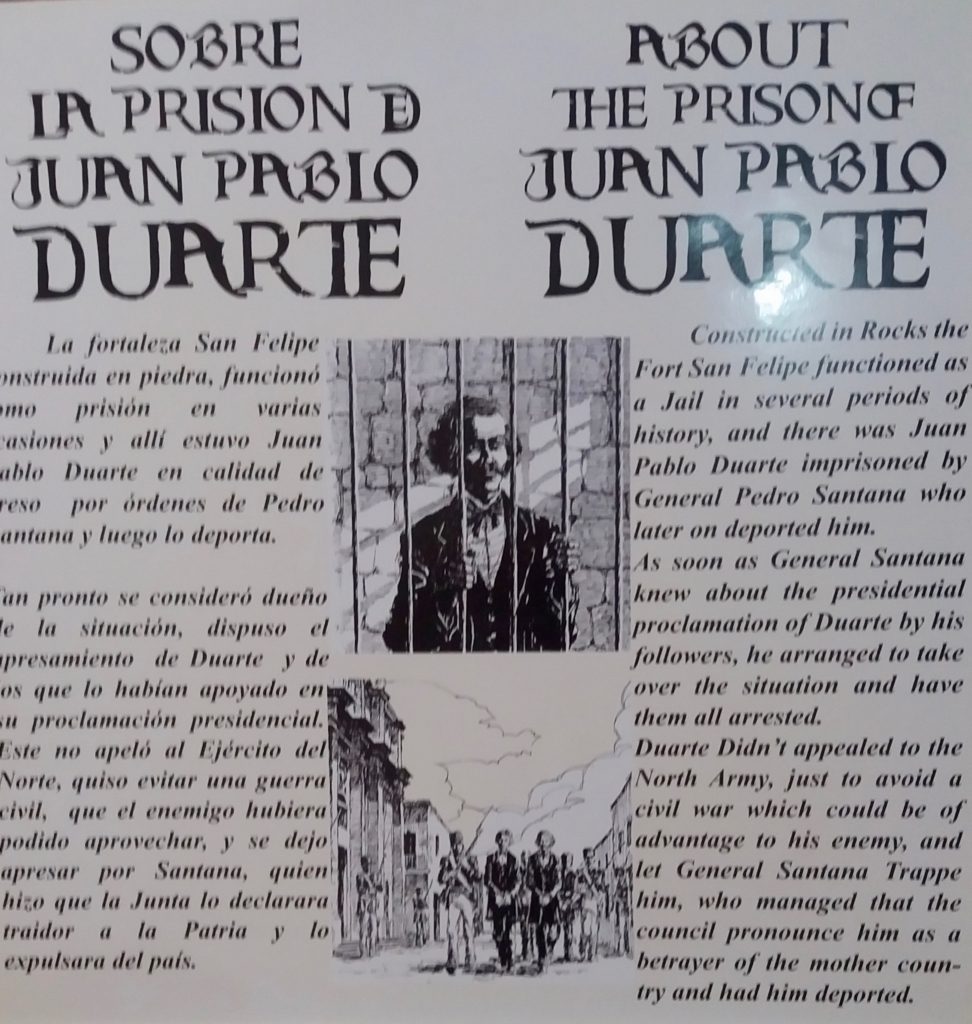 In addition to the old armaments at Fort San Felipe, the most prominent historical documents we saw concerned more recent history, that of Juan Pablo Duarte (1813-1876), honored as Father of the Homeland. With these kinds of stories in our minds, the remains of the old weathered Fort San Felipe in Puerto Plata held a sad kind of charm.

Many Hues of Amber 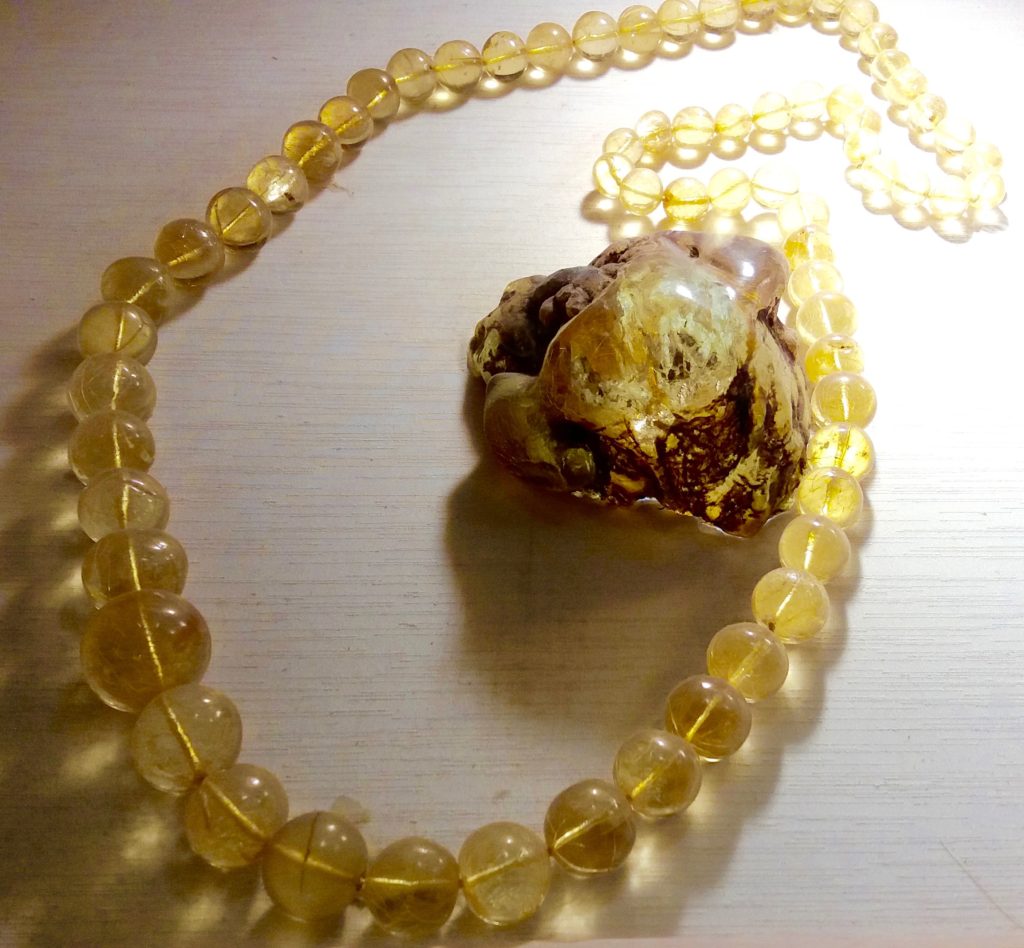 After spending a few hours in the Dominican Amber Museum in Puerto Plata with its excellent documentation of the formation and types of amber found world-wide, I can says quite literally, “I had no idea!” No idea that there are so many colors and textures of amber, that it was formed in such varied time periods and under so many geophysical circumstances, or that some groups of people have spiritual associations with the stone. And especially no idea that so many “must have” purchases would come home in our luggage. 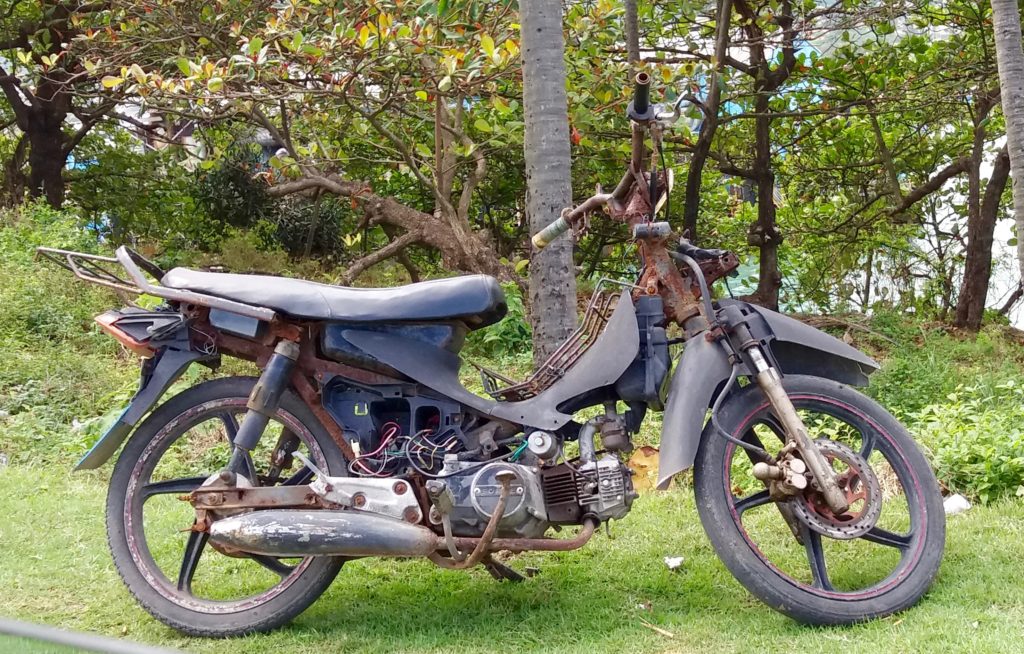 Antique working bike in a city of motoconchos

We saw this ancient bike, still in working order, standing near the curb at Fort San Felipe. We realised a little later, after driving around the city, that it had been an iconic visual. A local told us that Puerto Plata has 3/4 of a million people and a million motor bikes. Instead of taxi drivers driving cars, motorcyclists ferry people around on the backs of their bikes. The drivers wear numbers like jockeys do. We saw middle-aged men in impeccable dark business suits on the backs of motorbike taxis. Similarly, women in heels and pencil skirts rode side-saddle on the back of the motoconchos. 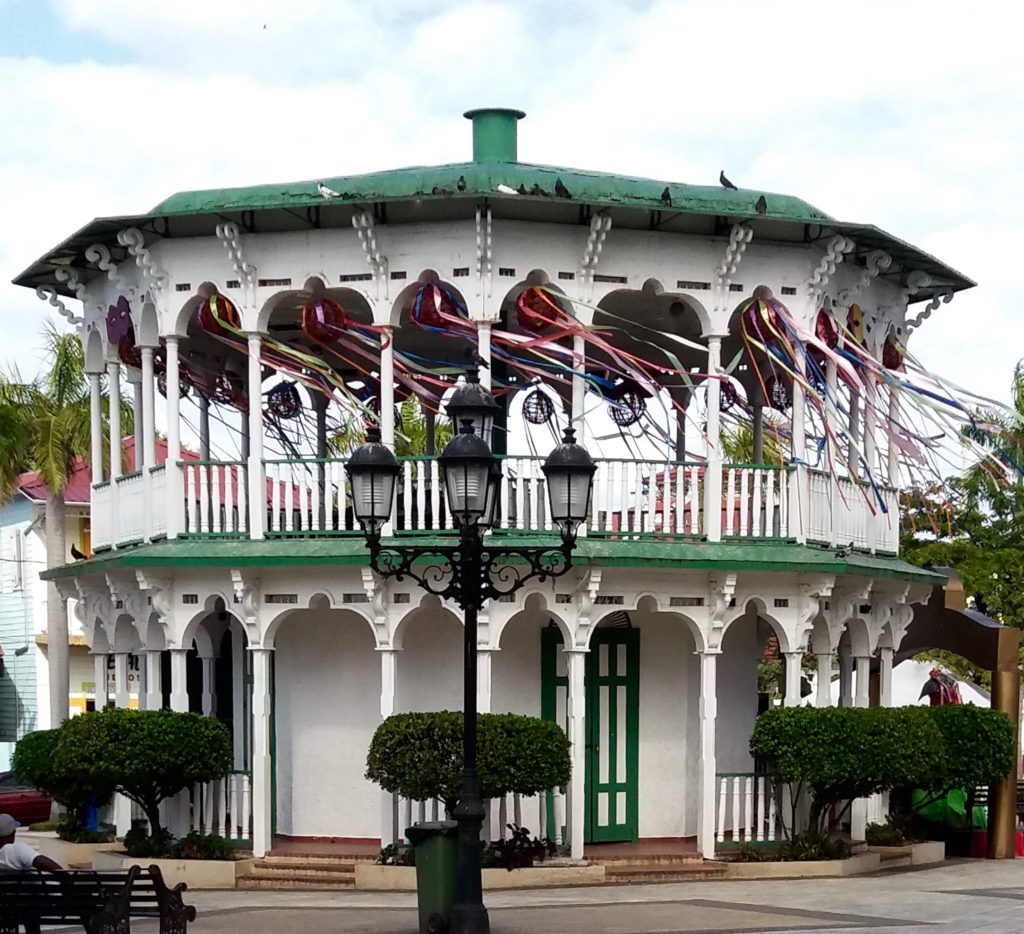 Victorian Square on a windy day

There were so many motorbikes roaring past our restaurant at lunchtime (with absolutely no mufflers engaged), that our lovely visit at Polanco Restaurant near the Victorian square was ruined. The traditional Dominican food we ordered was very good, but the sound of the motorbikes was so loud we couldn’t hear conversation across the table. The city has got to do something about the noise level from its million motorbikes. It’s awful.

Afternoon on the beach 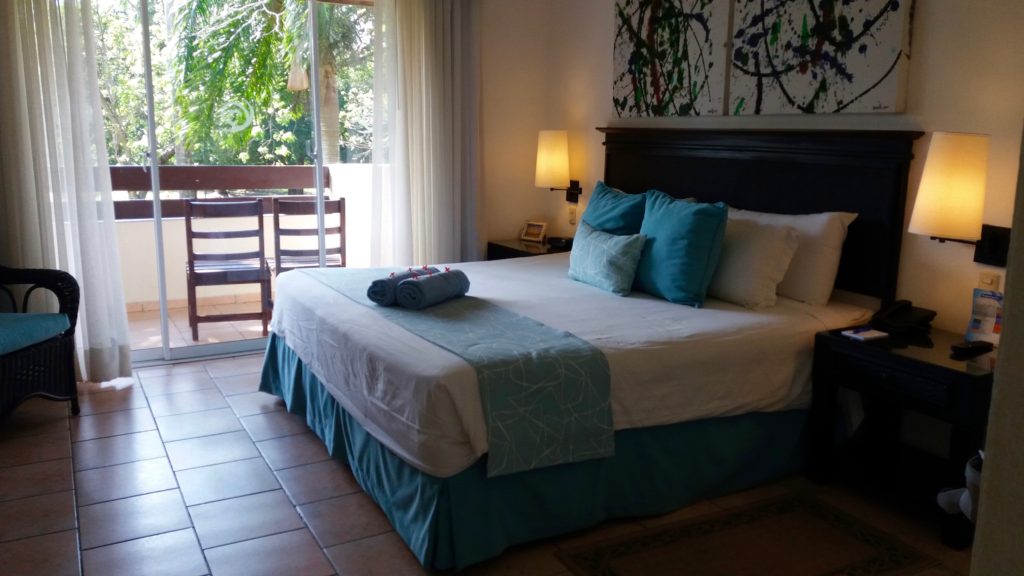 Our day came to a perfect close after we discovered the gorgeous beach of Playa Dorado (Golden Beach) and the lovely rooms at Blue Jack Tar. Dinner at Green Jack Tar Restaurant on site was excellent, and the complimentary breakfast the next morning was truly the best on the island! I look forward to staying there again on our next trip to Puerto Plata.

2 thoughts on “Pirates, Amber, and a Mighty Fine Beach”