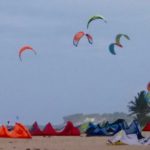 The images of kite surfing that instantly came to my mind were of kites skimming the waves. I wasn’t clear on the kinds of fabrics that might be involved or what made it such a spectacular event, but I thought I knew kites. After all, I’d spent some time with kite flyers on the oceanfront of Qingdao, PRC, while working there prior to the Beijing Olympics. I had also attended the world-class Weifang International Kite Festival and thought I had seen in real-time about as many stunts as it was possible to do with kites.

When I arrived at Kite Beach in Cabarete, however, I didn’t know what to make of the fact that the kites were enormous and tied by multiple cords to people floundering around in the water near shore. Nobody seemed anxious about these half-drowned bodies except me. It certainly didn’t seem like much of a kite-flying event! 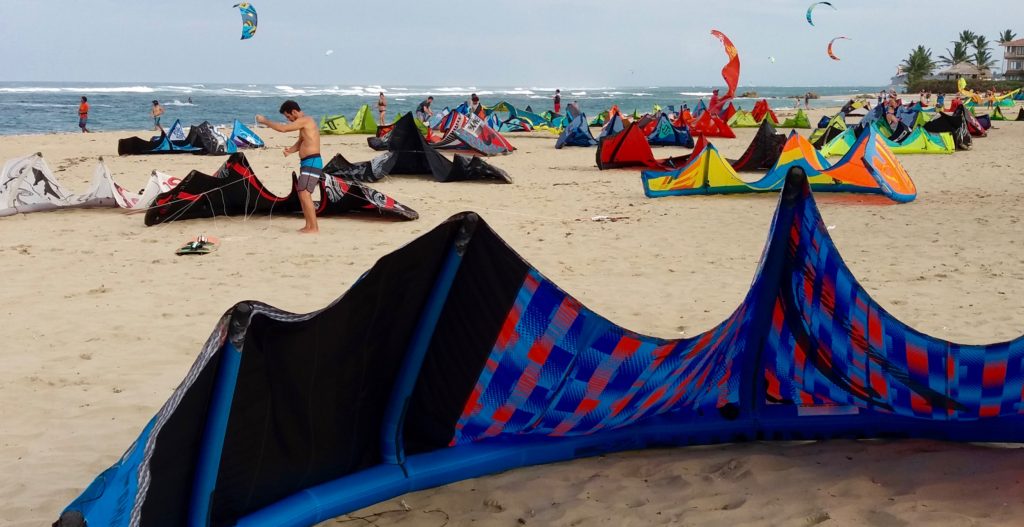 Then I happened on a young woman standing on the shore attached by lines to a large kite lying on the sand, clearly stricken by what she faced. Standing beside her was an exceptionally athletic young man who was talking her down, helping her remember what she had learned in kite boarding school that morning. She was shaking visibly, but not yet weeping. She may have made a go of it later on, but there were so many kites in the sky and people in the water to watch that I lost track of how her story unfolded.

A couple of words suddenly stood out

Kiteboard? Well, that changed the whole image. It wasn’t kites doing the surfing, it was people surfing with boards, which looked similar to all the other surfboards and snowboards I’d ever seen.

School? I turned around to look at the buildings on the beach. Right where I was standing I could see the signs for one kite-boarding school after another.

Cabarete kites in the air & on the sand

As you can tell by now, I hadn’t done due diligence on kite-surfing, aka kite-boarding (apologies due). Actually, I didn’t even know it was a world-class sport on which due diligence was necessary! But if I had done prior research, I would have known that the semi-drowning people I had seen earlier were actually learning step one of the sport: body dragging. That’s where you learn how to use your body in the water to guide the kite into taking you up-wind to retrieve your board when you fall off. The terrified young woman was actually taking a more advanced step in which the instructor would assist her in her first attempts to launch the board into the water so she could get pulled along the top of the waves by the kite in the air. (Have you ever heard of a more complicated sport?)

Later in the afternoon the winds increased to the point where the beginners had tired out and were stacking themselves up, beer bottles in hand, on throngs of plastic chairs along the beach. Meanwhile, the experts took to the air and water, and I saw astonishingly deft performances. These kiteboarders were first-rate athletes. I saw maneuvers I’d only seen done on snow at various Rocky Mountain ski resorts and of course at the Olympics. I began to wonder . . . . .

Is kiteboarding an Olympic sport?

Answer: Almost. According to the IKA (International Kiteboarding Association), the 2018 Youth Olympics to be held in Buenos Aires, Argentina, will have kiteboarding as one of the events. Negotiations are still ongoing, however, to have kiteboarding accepted for the 2020 Summer Olympics in Tokyo.

We visited in February, which is considered winter season (January through April) when the winds pick up and the water of the Atlantic Ocean is choppy against the north shore of Hispaniola. Apparently October through Christmas is less desirable for kite boarding because of less wind, even though the water stays a lovely 79 degrees year round. The locals of Cabarete claim that Santa Claus truly loves them because he brings the gift of wind to the beach. May has lower winds, too. Then summer season arrives, June through August, with the higher winds and calm water that create kiteboarding paradise.

Every year Cabarete Bay hosts the world cup tour of the Professional Kiteboard Riders Association (PKRA) the third week of June. We’re coming back to see it!

Our friends suggested the perfect place to stay. Contact <le.reef.cabarete@gmail.com> and ask for a second floor room with a balcony overlooking Kite Beach for a good view of the afternoon kiteboarders. When it wasn’t available on our dates, the hotel we chose turned out to be one of those where the surfers stayed. The little pool of Kite Beach Inn fronted the beach and the balconies on the rooms overlooked the parking lot. So much for aesthetics! But the rooms were large and clean and the price suited a youthful clientele who intended to stay awhile. As we traversed the stairs, we met plenty of courteous, athletic-looking people hauling kite-boards and wearing little more than salt-crusted hair and a wide smile.

Hauling kite to the launch

Next door to Kite Beach Inn is a little outdoor eaterie that serves a most delicious breakfast. Friends recommended Michael’s Stone Bar Restaurant for an excellent lunch or dinner on the beach in Sosua, a little town just west of Cabarete. But we found a very nice place serving Mediterranean cuisine right in Cabarete, Bliss Restaurant, (call for reservations and check for closures before you go).