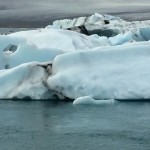 Iceland’s water, liquid and solid, is amazing in all its forms. Whether you drink it, snorkel in a fissure, or hike a glacier, it is water like none other. I’d seen photographs of beautiful Jokulsarlon lagoon that proved why the site is sought after by film-makers. The pictures feature milky turquoise water colored by refraction through alluvial silt, with icebergs recently calved from Breidamerkurjokull glacier floating serenely in the distance. Weather, however, makes a big difference in what you see.

We arrived at Jokulsarlon on a day when the wind was not our friend and had pushed thousands of icebergs of every imaginable size toward the parking lot. Some of the icebergs held an intense turquoise in their heart, like a blue flame in the ice. But most were besmirched with black volcanic ash.

We drove a few kilometers up the road to Gerdi Guesthouse for the night, (which is a lovely place to stay), and celebrated a couple of birthdays with langoustine and skyr (See my blog post, “Meals to Love in Iceland–Or Not”). The next morning when we retraced our route on the Ring Road, I sensed something strange happening in the creek that drains the melt water from Jokulsarlon Lagoon out to the ocean. I yelled for my daughter who was driving to pull into the parking lot, and we all jumped out.

The creek that flows two directions

The evening before, the creek had done its job of emptying the lagoon at a steady rate. This morning however, the tide was coming in at the same time and in the same riverbed. I had seen rivers that appeared to reverse themselves when the tide came in. But I’d never seen a river that ran two directions at the same time in one riverbed. Can you see the raised line of water in the photo that shows where the division is between the very cold melt water going out of the lagoon and the 49 degree F seawater coming in? Apparently the average land temperature in September is 48 degrees. So I told my daughters if they needed to warm up they could go jump in the sea. No takers. The seals, however, scampered here and there in a kind of feeding frenzy as nutrients from the sea came inland on the tide.

The Silfra Fissure is a phenomenon found in few other places in the world. You can swim between the North American and the Eurasian continental plates, which are gradually separating. In fact, the gap widens by about 10 mm to 2 cm each year (depending on the expert opinion you contact), resulting in earthquakes every ten years or so. But compared to volcanic activity, which is always an immediate possibility, the progress of a widening fissure that will eventually split the island in two, occurring over a half dozen millennia, probably doesn’t signify much upheaval to the pulse rate.

Can you imagine anything more totally adrenalin based than snorkeling in the frigid waters of the Silfra Fissure? We made up a group of about fifteen people all with the same insane idea. The company we hired to accomplish this, Iceland Excursions, describes it as an adventure lasting several hours, but the truth is we spent the bulk of that time just getting dressed. 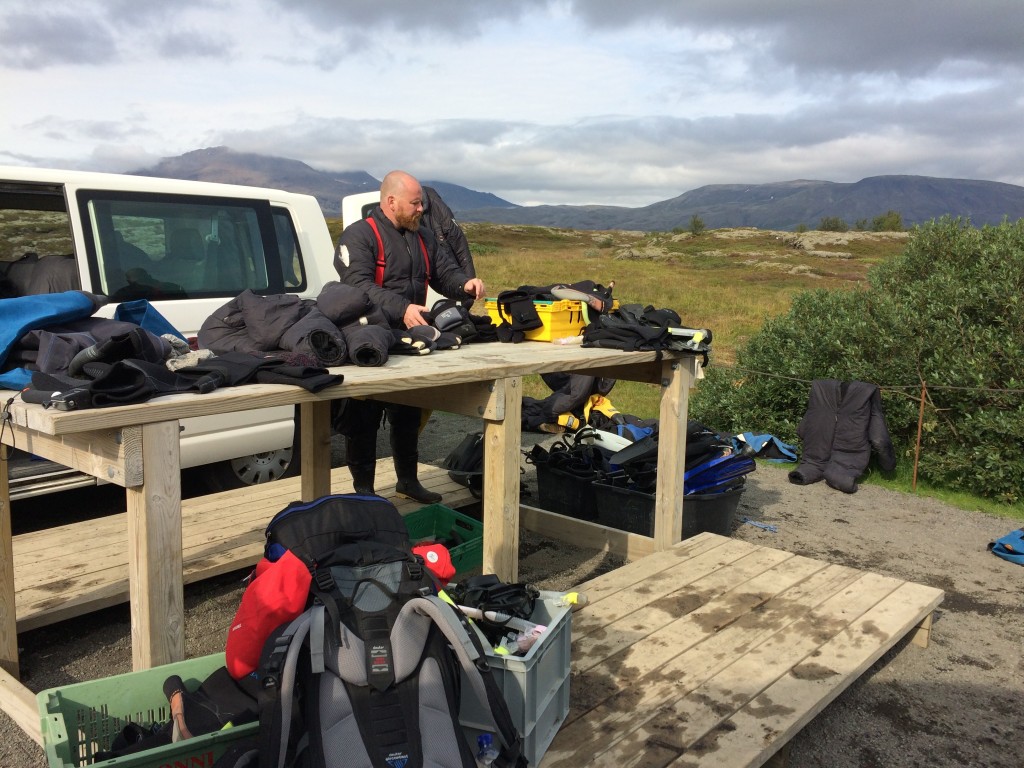 padding for underneath our dry-suits

In order to snorkel in water slightly above freezing, we hauled our bodies into fluffy black jumpsuits. After that we had to cram the entire mass into a dry-suit, always presuming we could tell our foot from our elbow. So much air was trapped in the wadding, that after we’d managed to pull on the dry-suits, the guides instructed us to crouch with our arms across our chest. Then they pulled open the rubber neckline of each suit and a rush of air came out that left us looking like lumpy vacuum-packed marshmallow people.

We trudged along a little road, down a few steel stairs, and entered the fissure in surroundings that totally belied the unique geology of the area. You wouldn’t know the phenomenon below based on external clues.

The current in the fissure is gentle but relentless. I needed it. With all the gear on my arms and legs, I could barely flip my flippers. But what I saw underwater was truly beautiful. I’m so glad I did it. I don’t think we were actually face down in the frigid water more than about half an hour, but for several days my face was quite red with a white rim around the edges where the hood protected my skin. 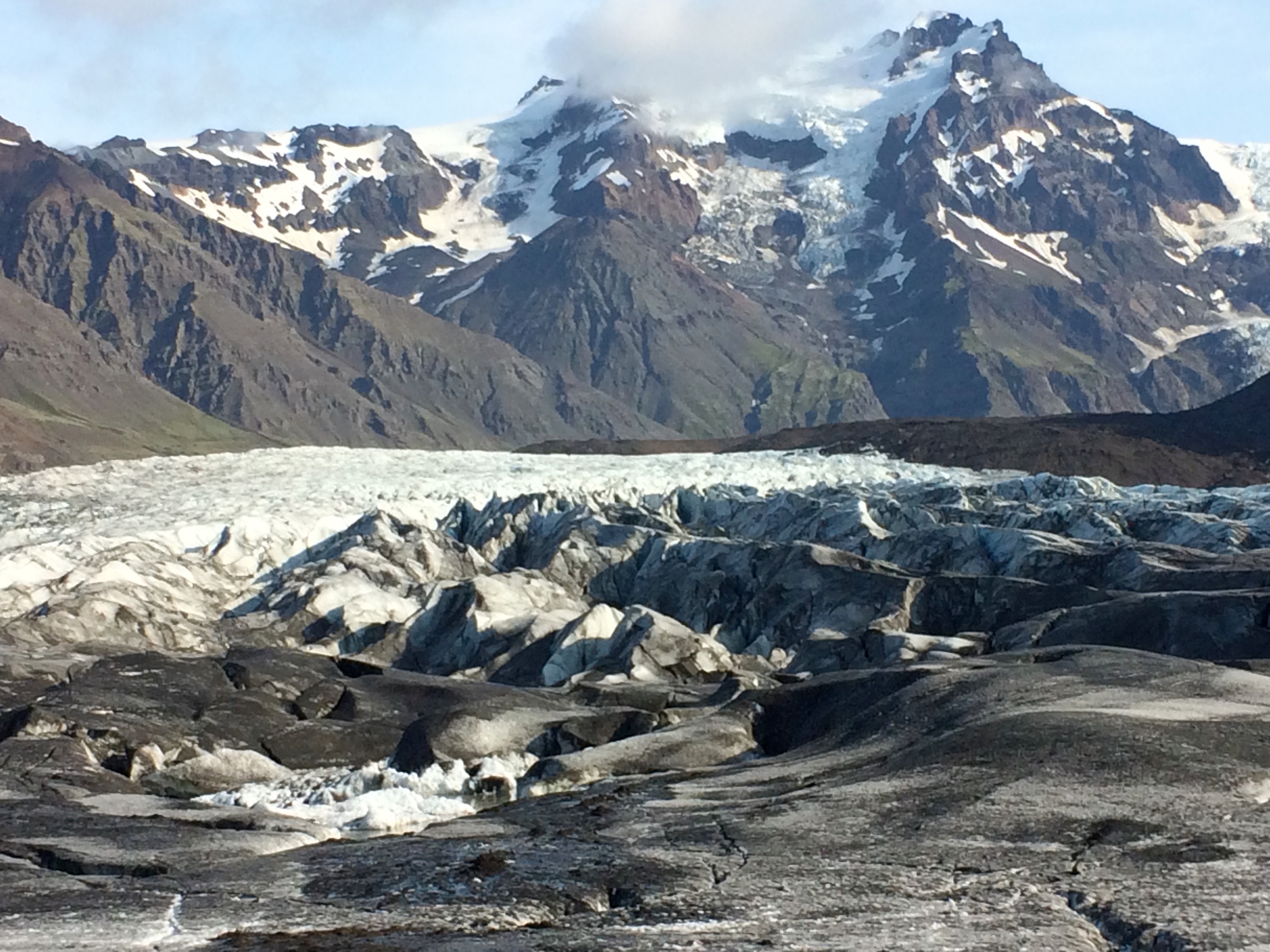 The day of our glacier hike came with spectacular weather. Our very droll guide, six feet with curly strawberry blonde hair twisted into a man-braid down to his waist, advised us not to think it was normal. “Usually the weather is terrible,” he said. But he’d never prove it by our experience. The sky was blue and the glaciers weren’t going anywhere fast. 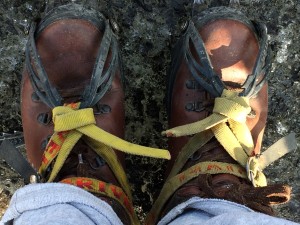 First we learned how to tie our crampons onto our hiking boots, plus a few important tips. Did you know that the toe picks mean you can walk straight up a vertical face? But if you try to traverse on an angle like the path a horse or backpacker would choose in going up a mountain, crampons become rather unstable on the sideways angle.

Cully also pointed out that many novice glacier hikers injure themselves by snagging their crampons on their pant legs and falling. “To avoid this,” he said, “walk bow-legged.” He opened his legs in a big arch and said, “Not like a Texas cowboy.” Then placing his ice-axe between his feet, he adjusted his bow-legged stance to encompass exactly the ice-axe length and smiled, “Like an Iceland glacier cowboy!” We were fifteen people from almost as many countries in the world, all listening to the explanation in English—and we all got the joke just fine. 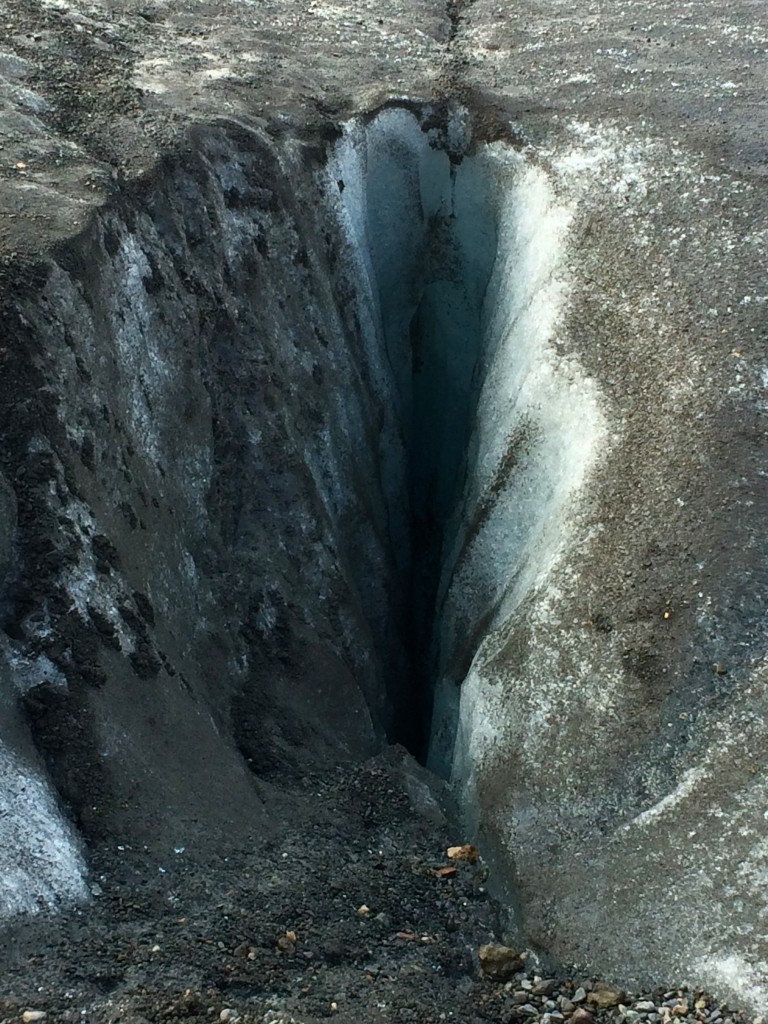 Glacial Fissure we didn’t fall into 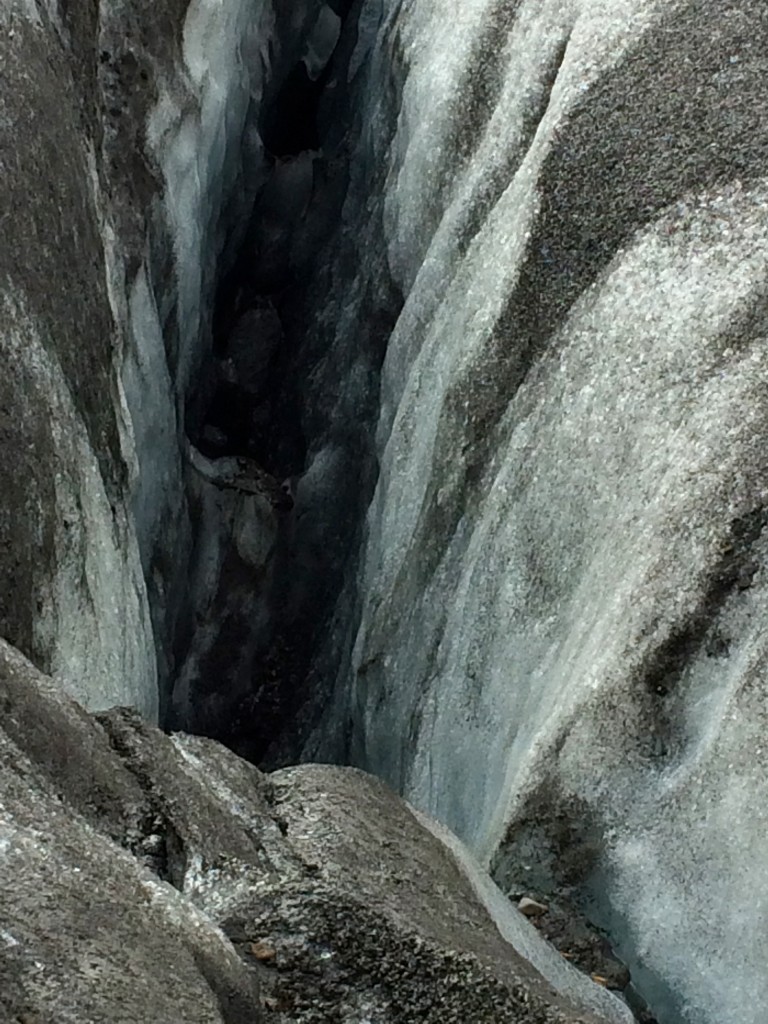 Another glacial fissure we avoided

Cully taught us how to drink glacial melt, Icelandic style. It involved a full body press, toe crampons engaged, and a sip from the rivulet between push-ups. “No girardia or beaver fever in Iceland,” he claimed, “any running water is safe to drink.” Then he challenged us to take a drink in the same way. Several people accepted the challenge, but no one could do more than one push-up. I said I’d need a derrick. Since only my daughters got the joke, apparently no one in else our group had ever lived in oil drilling country. 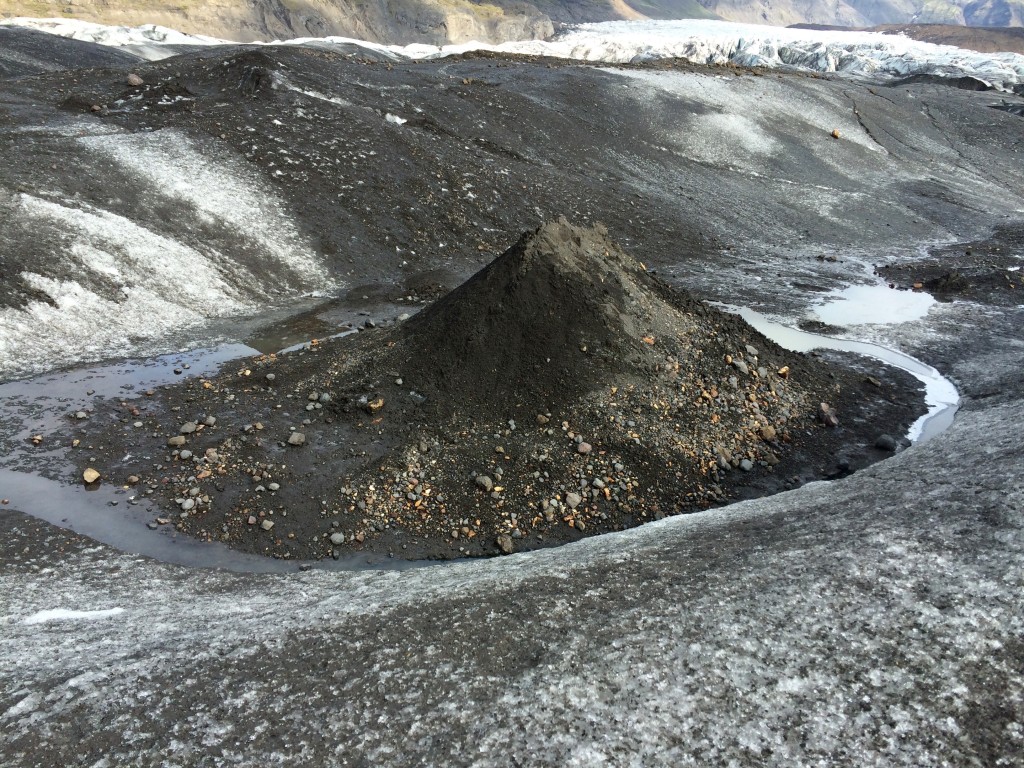 We were curious about the little pointed hills of black that sat on top of the glaciers. Apparently volcanic ash is a very good insulator, so when it washes into a declivity in the ice, it keeps the ice directly under it cold while all the exposed ice around it gradually melts away. That way, the ash mound rises higher and higher into the air even though it’s not a very thick covering. When I swung my ice axe at this little hill, the glacial ice was readily viewable a fraction of an inch beneath the surface.

One of the great pleasures of a visit to Iceland is the taste of the water that comes from the tap. That is, unless you drink from the wrong tap. Hot water is geothermal and has something of the taste and odor of sulfur about it. The cold water is delicious and pure. Just run the cold a moment to flush out any of the geothermal water, and pour yourself a drink like none other. One of our guides made the joke that some tourists are so habituated to buying their drinking water in plastic bottles from the store that they demand the same convenience in Iceland. So a company in Reykjavik obligingly fills up plastic bottles with tap water and sells them at a premium.