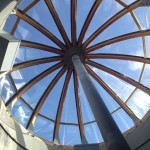 We learned how to smash a crab shell and not our fingers at the Crab, Seafood, and Wine Festival hosted by the two neighboring cities of Astoria & Warrenton. Cracking crab legs felt deliciously barbaric. You line up, pay your money, and they give you a paper plate with some cole slaw and garlic bread, a pile of steaming crab, a wet wipe packet, and a little wooden club so you can smash your way through the shell to the crab. Then you go to a table covered with fresh paper and set to work.

If you smack too hard, bits of crab shell go flying through the air. If you club it at the wrong angle, you either smash your fingers or your lunch lands on the floor. For a little while I thought I might have to go hungry. 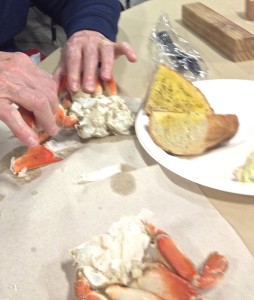 But hunger rules. I finally gained a little skill with the wooden club and got over the messiness of the process.

Until that day, I hadn’t known it was possible to feel so good while covered in drawn butter and crab juice. Meanwhile, various local bands entertained us. I particularly loved the men who sang sea chanties to us.

There’s something about a local festival that requires me to make a fudge purchase. I’m sure it’s a character flaw or something, but that fudge was some of the best ever.

We also happened on an interesting display called “Essence of Fire and Sea,” which caused my daughter to make a unique jewelry purchase. From bits of ancient Bactrian Greek glass found in North Central Asia and covered with centuries of mineral overlay by lying in the earth, the artists had crafted earrings and pendants of various shapes. I’ve never seen anything like it before or since.

Some people avoid the typical tourist activities. I’ve always wondered about that. Do they think it’s sophisticated to be blasé about a landmark the locals take for granted? Not me. I’ve always wanted to climb to the top of the Astoria Column with its sgraffito art depicting the historical changes in Astoria’s history. So we did. And here’s the picture to prove we made it to the top. 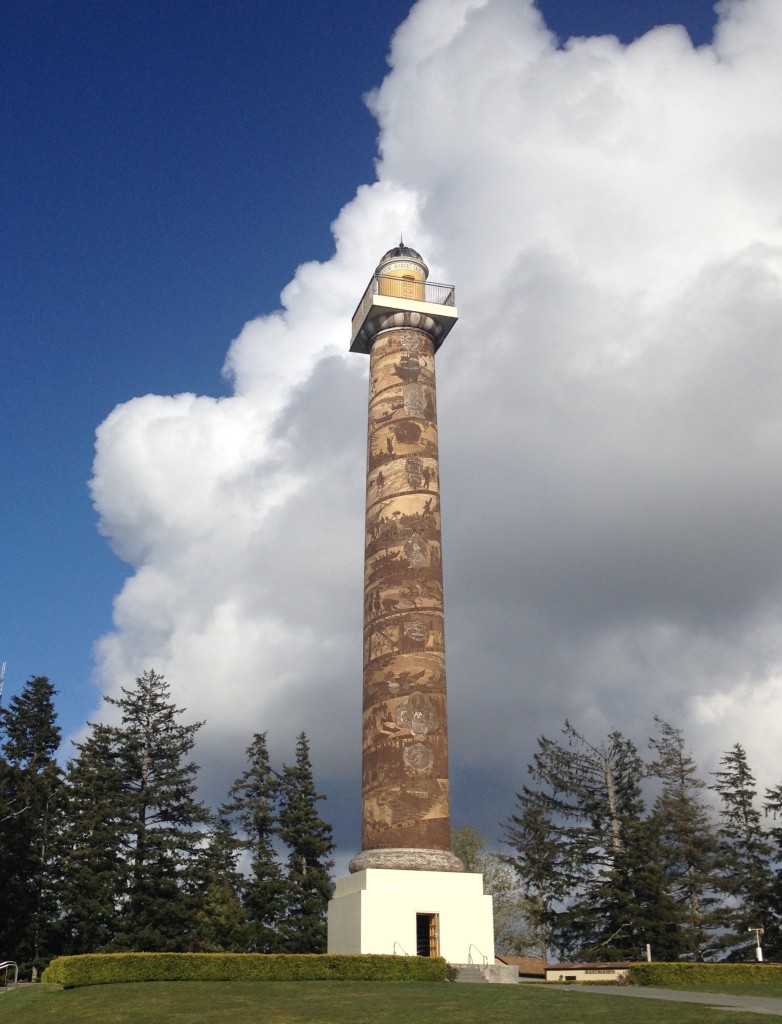 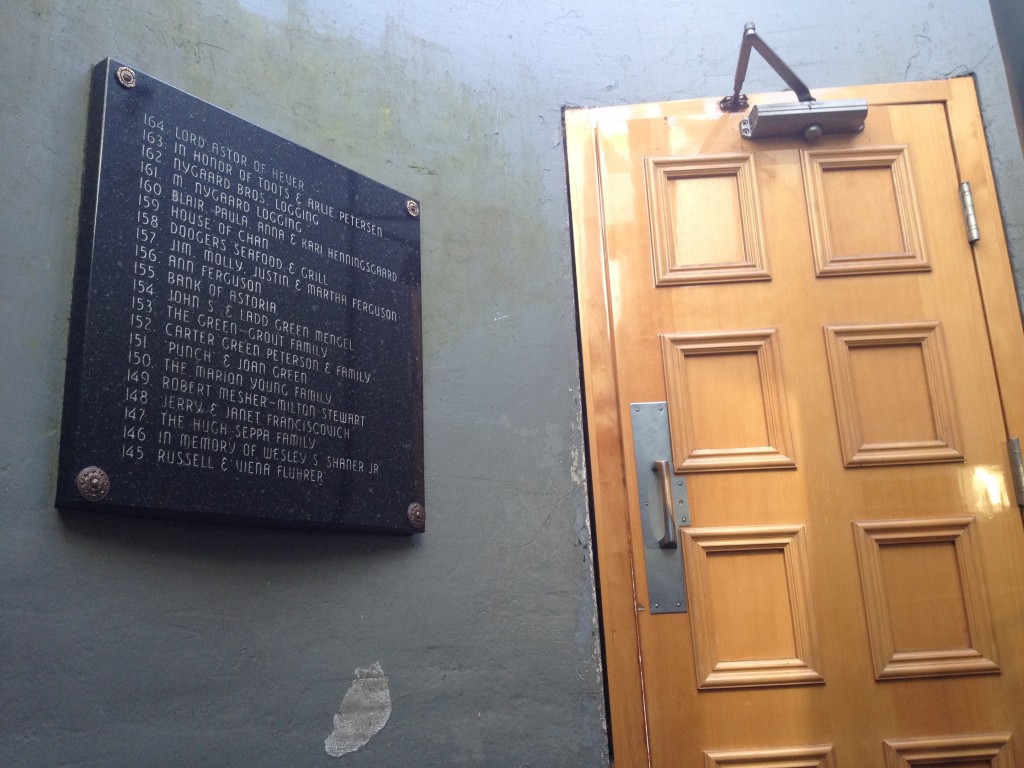 Proof we made it to the top

The sweep of the Astoria-Megler Bridge has a certain elegance I think. As America’s longest continuous truss bridge, later in the summer it hosts the 10k run walk called The Great Columbia Crossing. 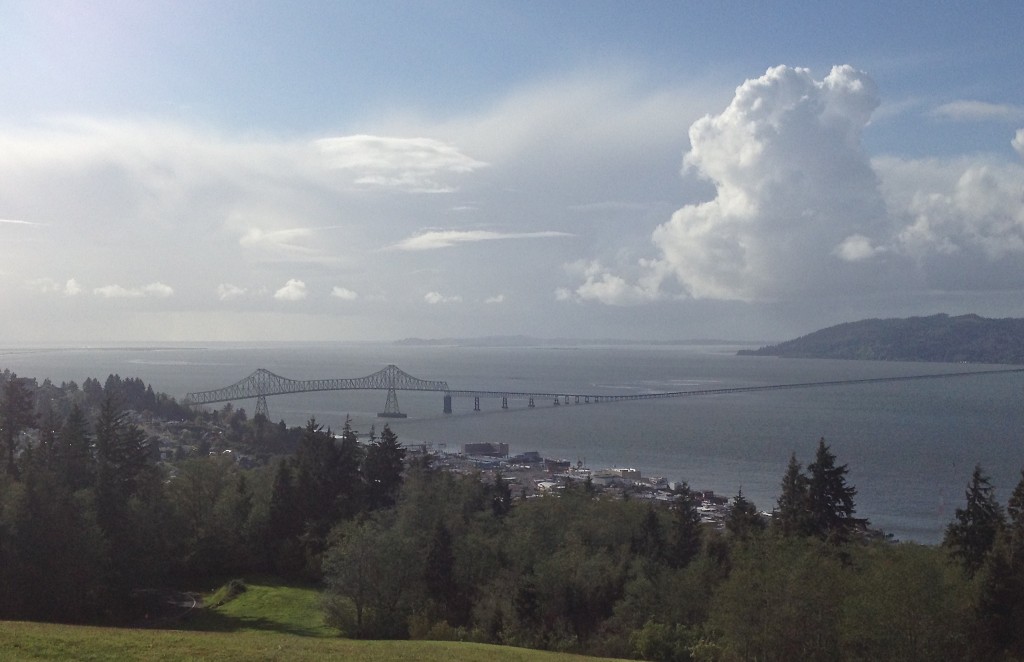 The volunteer docent on the vintage trolley that runs along the Columbia River made the history of Astoria come alive. I truly admire a person whose only payment for a job well-done is the appreciation of his fellowman. 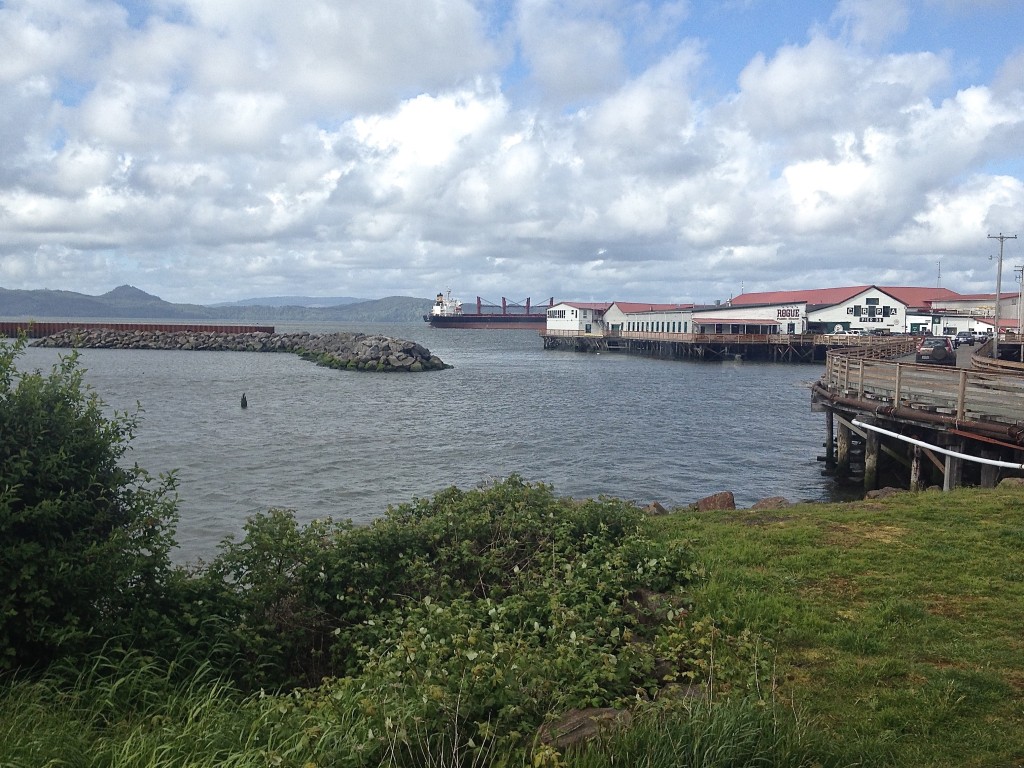 View of Columbia River from trolley 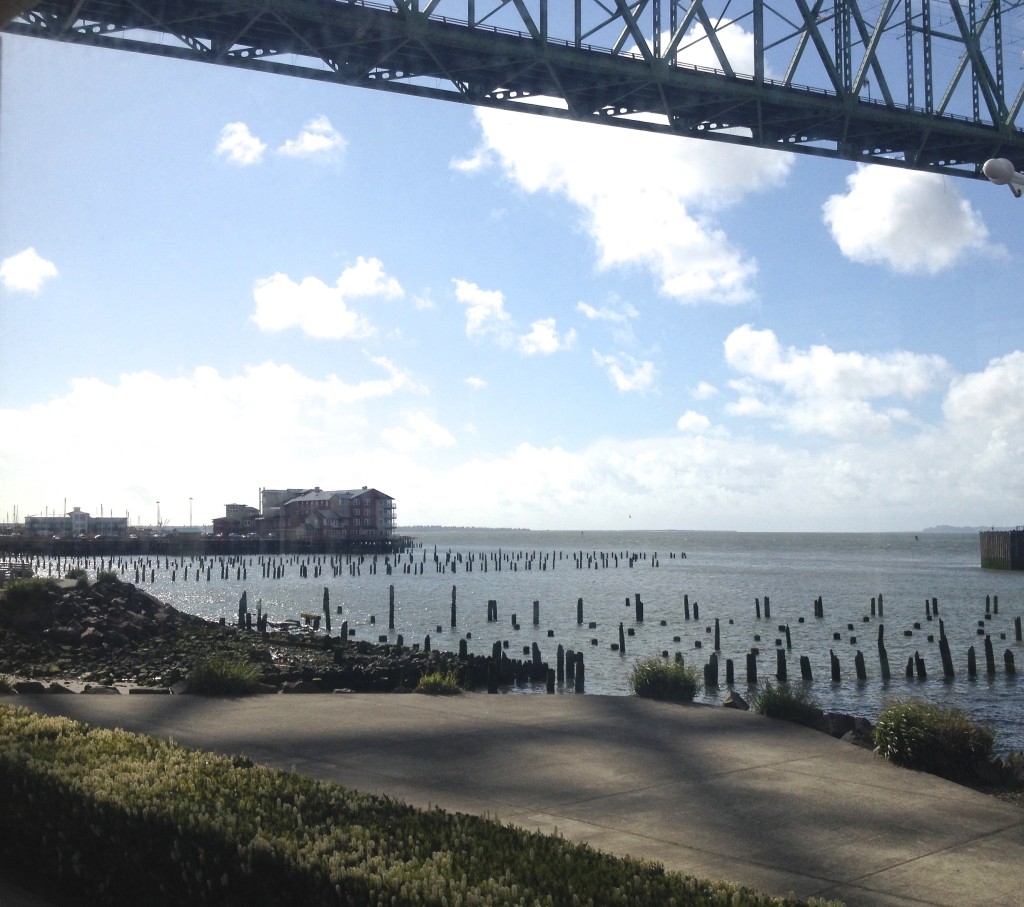 We couldn’t leave town without stopping at the famous house where the movie, The Goonies, was filmed. It’s privately owned, hence the sign asking for courtesy from gawkers like us. But I wonder how it feels to have so many strangers photograph the place you call home. 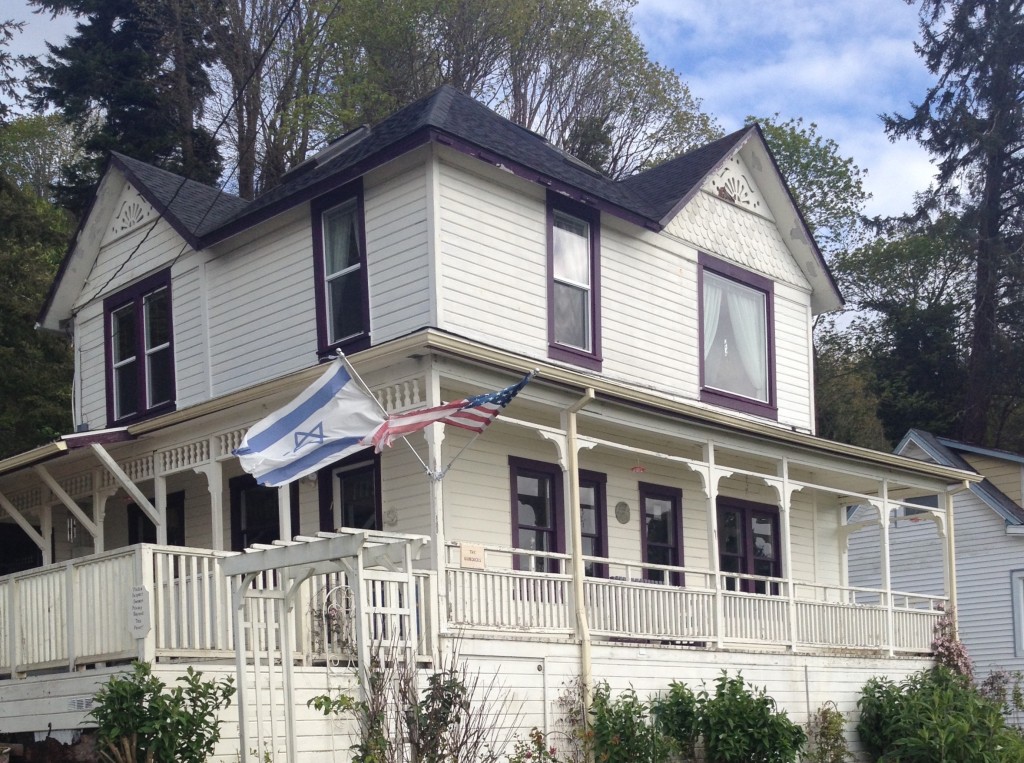 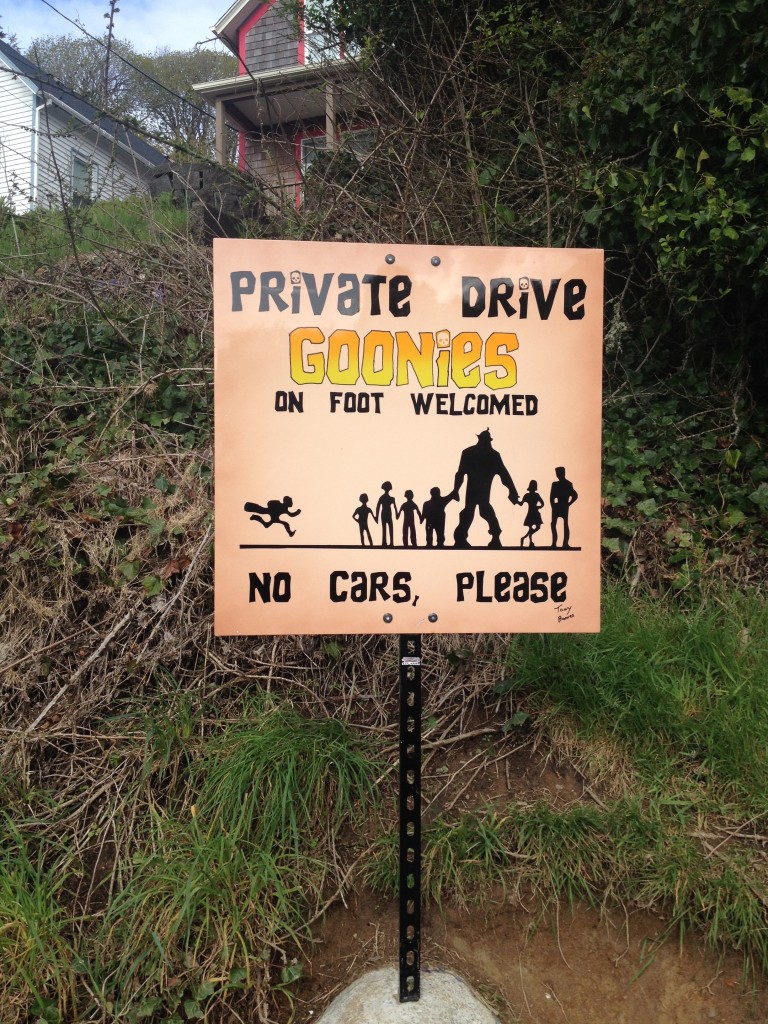 2 thoughts on “How to Smash a Crab Shell”