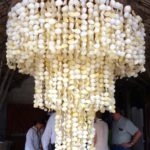 Discovering high-end cuisine in the DR has generated many pleasurable evenings with good friends, but I always wonder what aspects of the experience are for the tourists and what are for the locals. Take for example, the matter of music. At Santo Domingo’s El Conuco we heard what I think of as “happy Caribbean,” the joyous rhythms that make your toes tap under the table and your shoulders twitch because your body wants to get up and dance.

There’s also a “contemporary Caribbean.” The sound seems to me like a fusion of Caribbean and Hip Hop. The young guides were listening to it at the outdoor tea house/rest area located at the hilltop before the descent to El Salto del Limon, for example. We’ve also heard it in some of the stores in the shopping malls.

On the other hand, most of the upscale restaurants we’ve visited deafen their patrons with U.S. techno and rock. They must think that’s what we want to hear, but what age patrons would that be? And would they be tourists or locals?

Dancers on a Bottle of Rum at El Conuco

Our most recent dining adventure at El Conuco on Calle Cassimiro de Moya featured ambience carefully curated to appeal to someone seeking an authentic Dominican country experience from a safe distance. 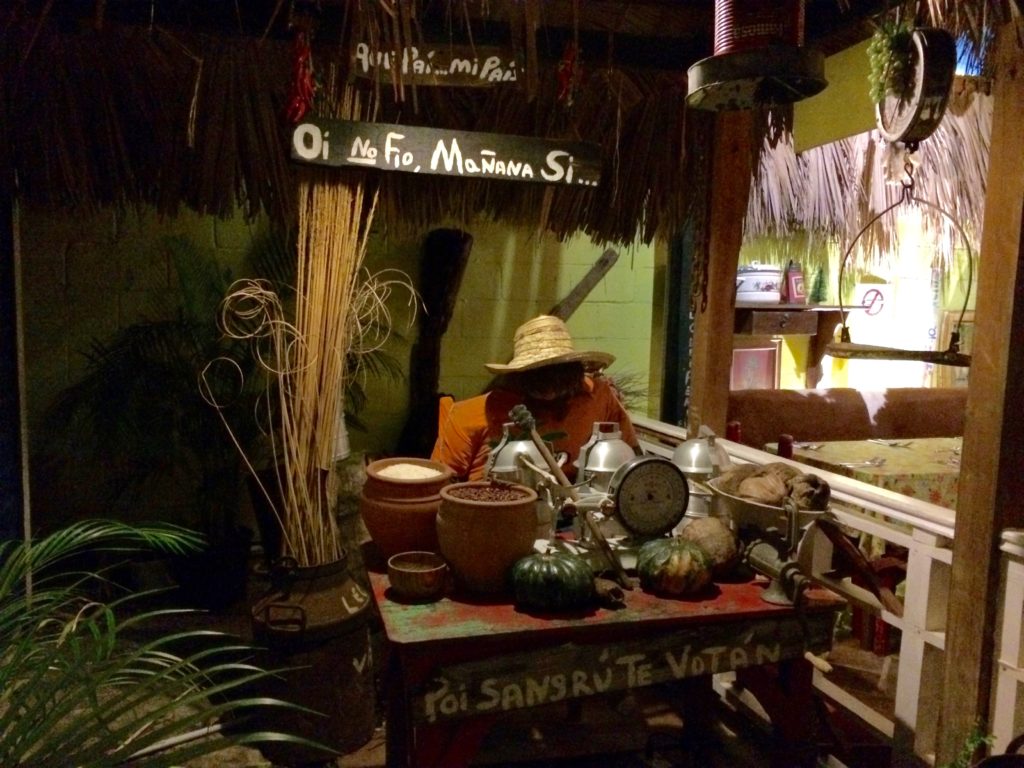 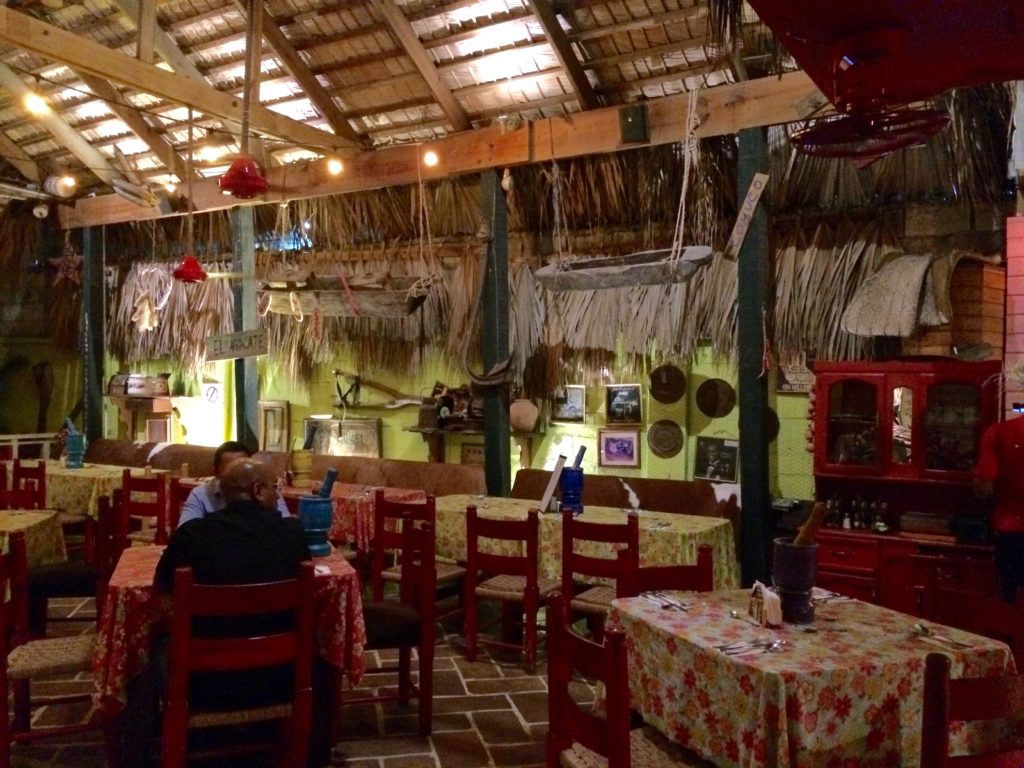 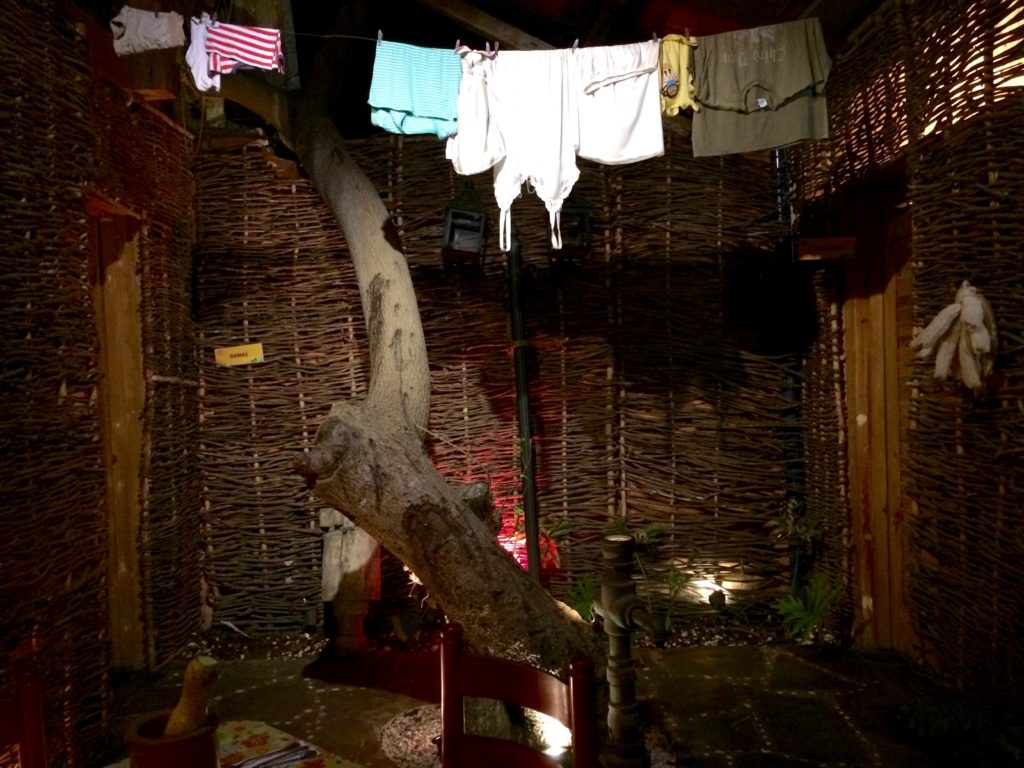 The Passage to the Banos

The dish of chicken with chinola sauce that I ordered was absolutely delicious, and we loved the floor show. A young man and woman danced Dominican style and ended their performance with a dance on a bottle of rum. Don’t think it’s possible? Take a look at these photos! 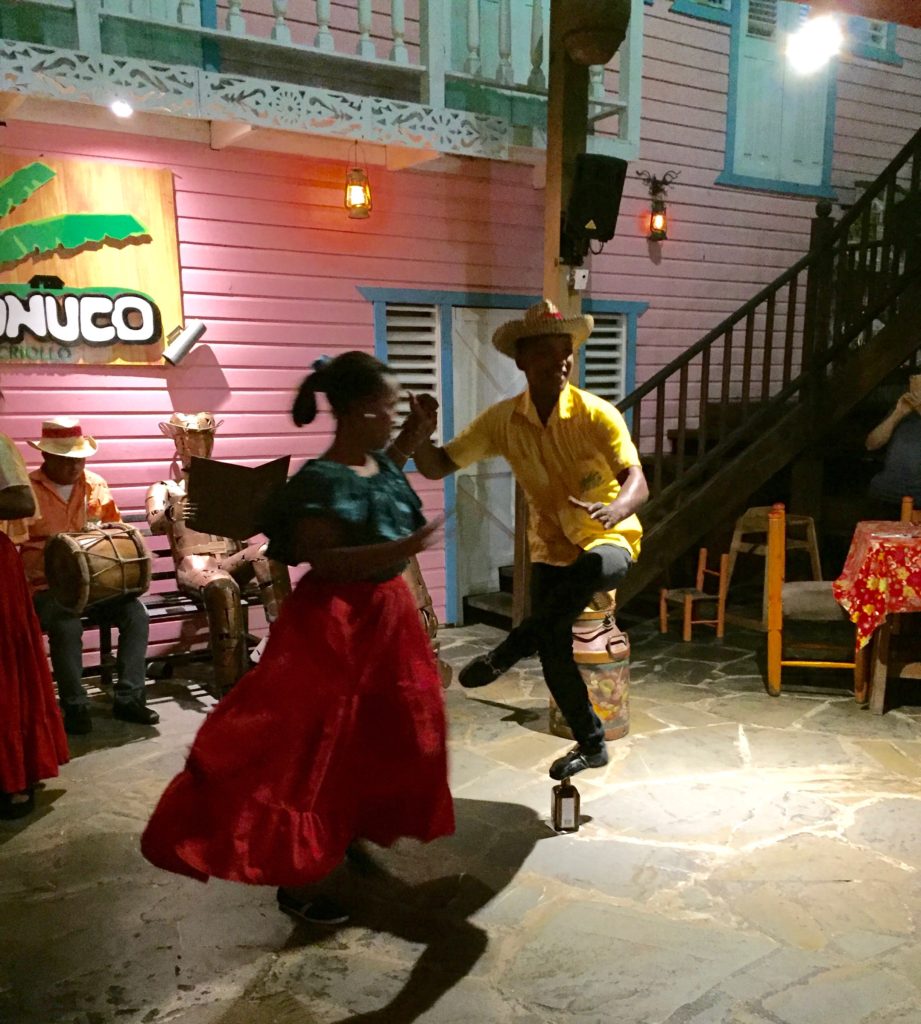 Dancing on a Rum Bottle 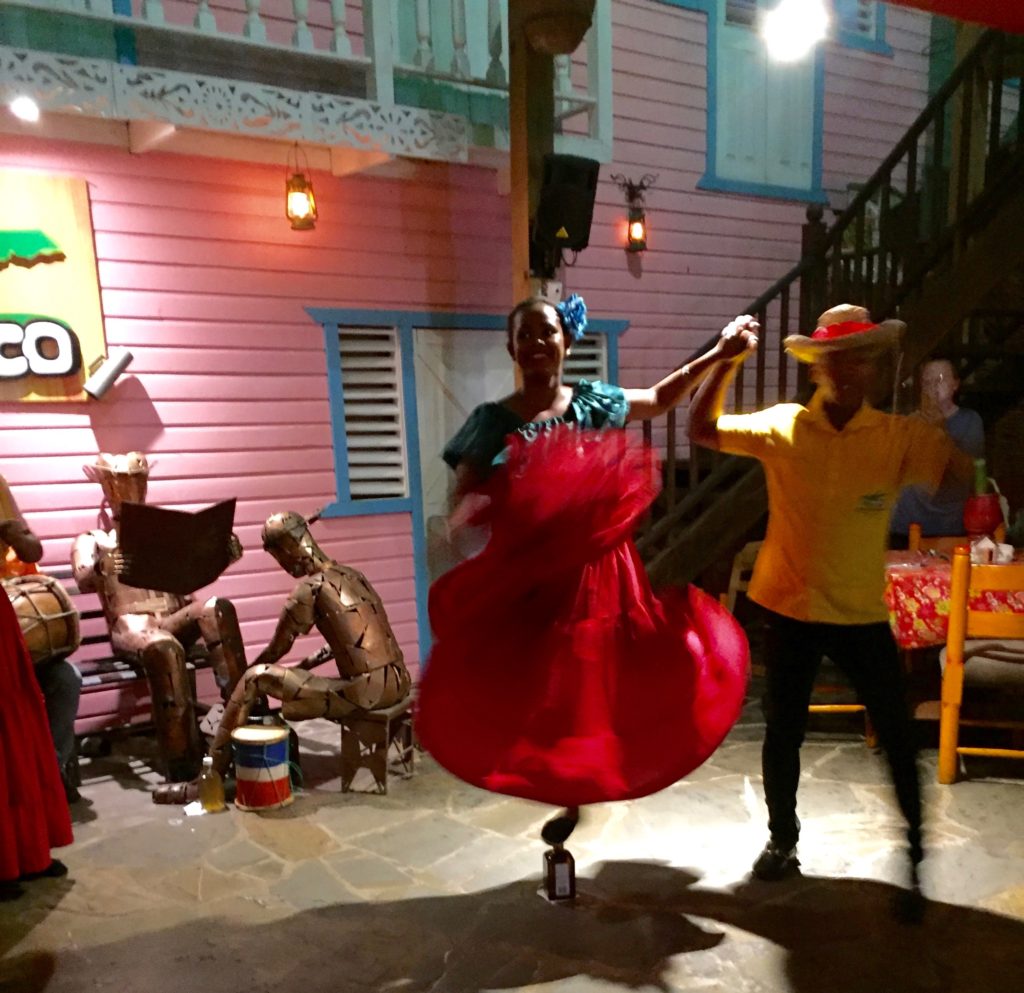 Dancer on a Rum Bottle

I had wondered if the restaurant was sort of stagey, a tourist destination that locals don’t endorse.

When we returned for dinner at the New Year, however, I got my answer. While we saw some tourists, the great majority were Dominicans who enjoyed the food and the music with gusto. 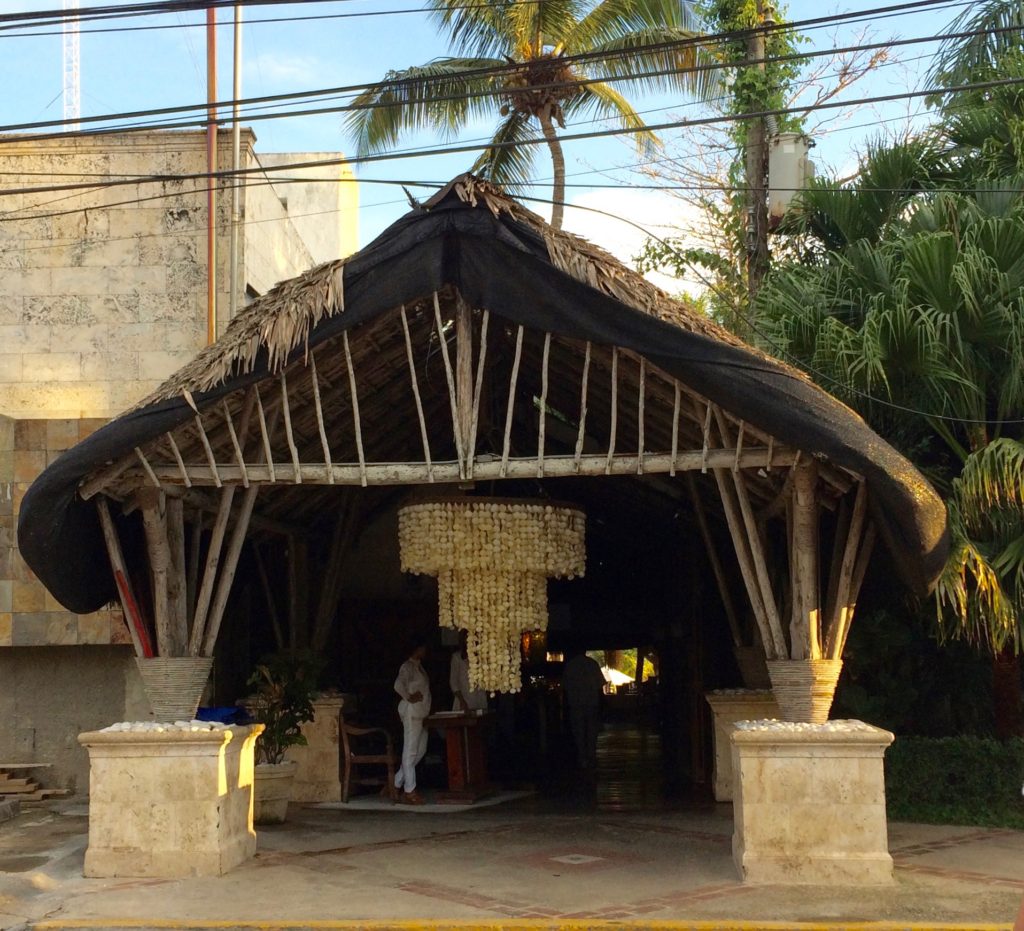 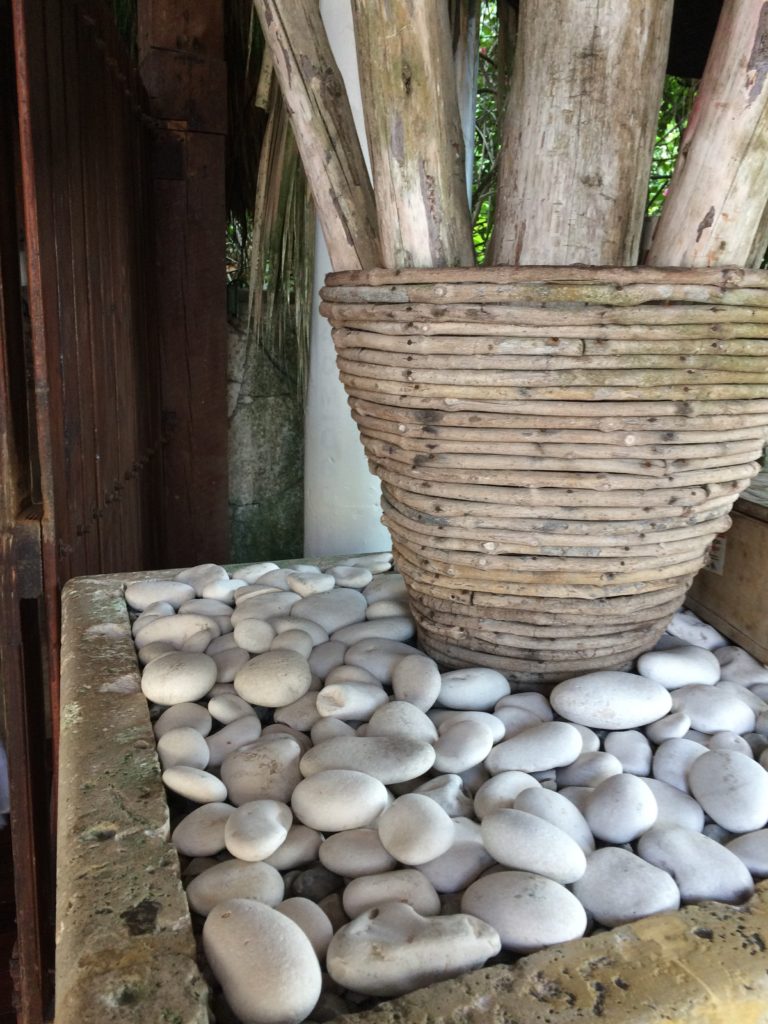 Rustic elegance in the entry 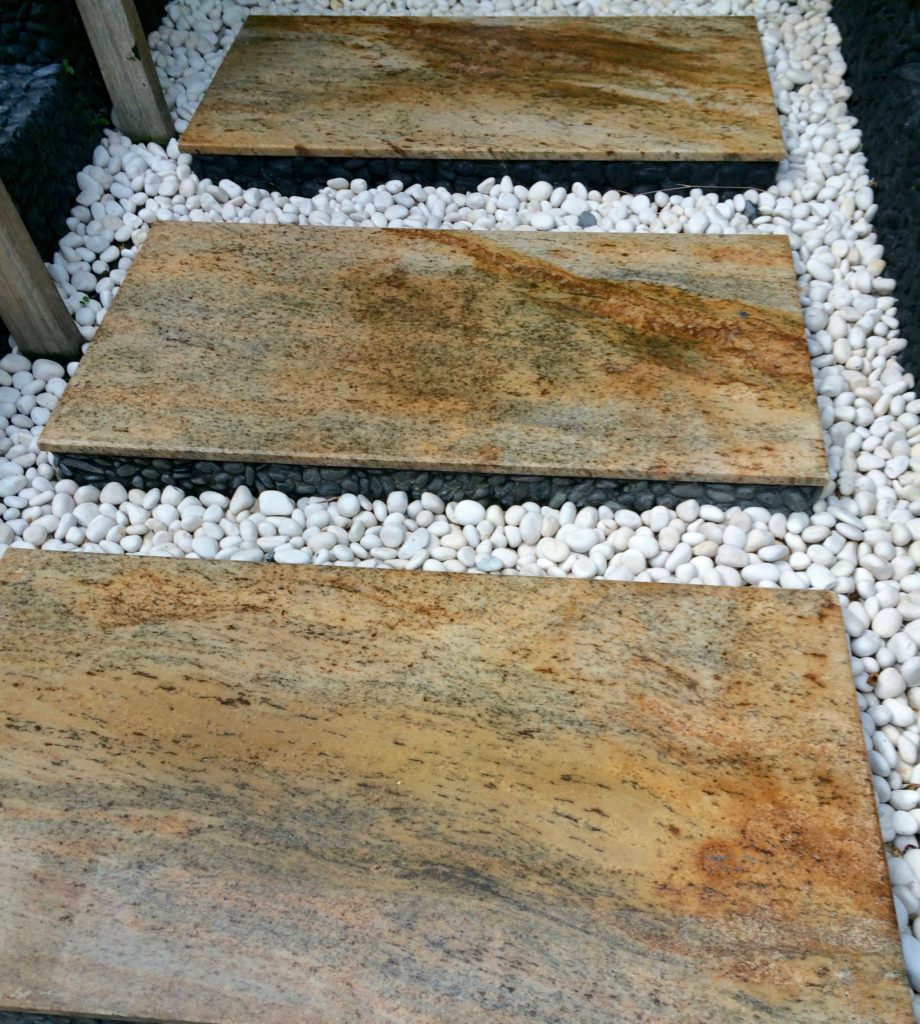 I eagerly anticipated a visit to The Boca Marina Restaurant in Boca Chica because so many people had recommended it. With a spectacular setting on a pier at the edge of the Caribbean Sea, the management has paid meticulous attention to physical ambience. At first approach you see smooth white rocks lining steps made of white rock tiles. Beautiful wood is visible everywhere in exposed beams and railings. Columns of white drapery and creamy shell chandeliers hang from ceiling to floor. 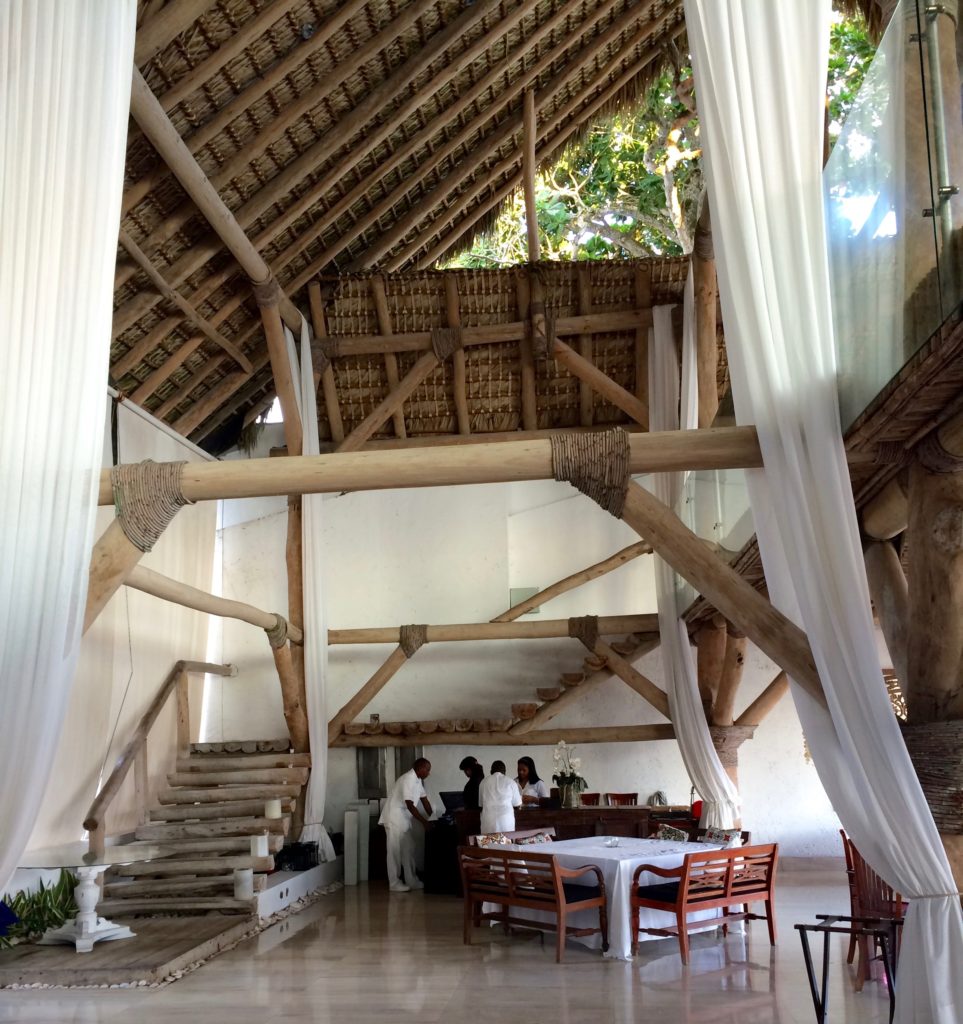 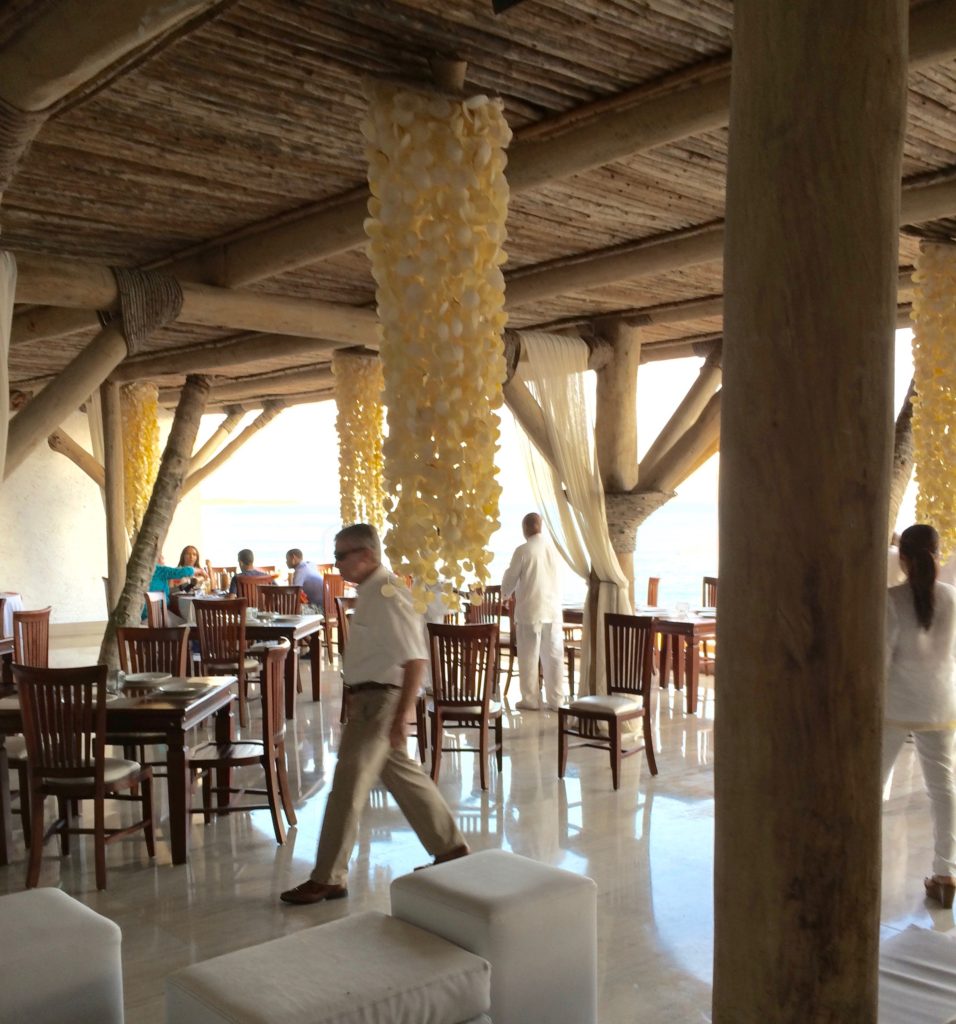 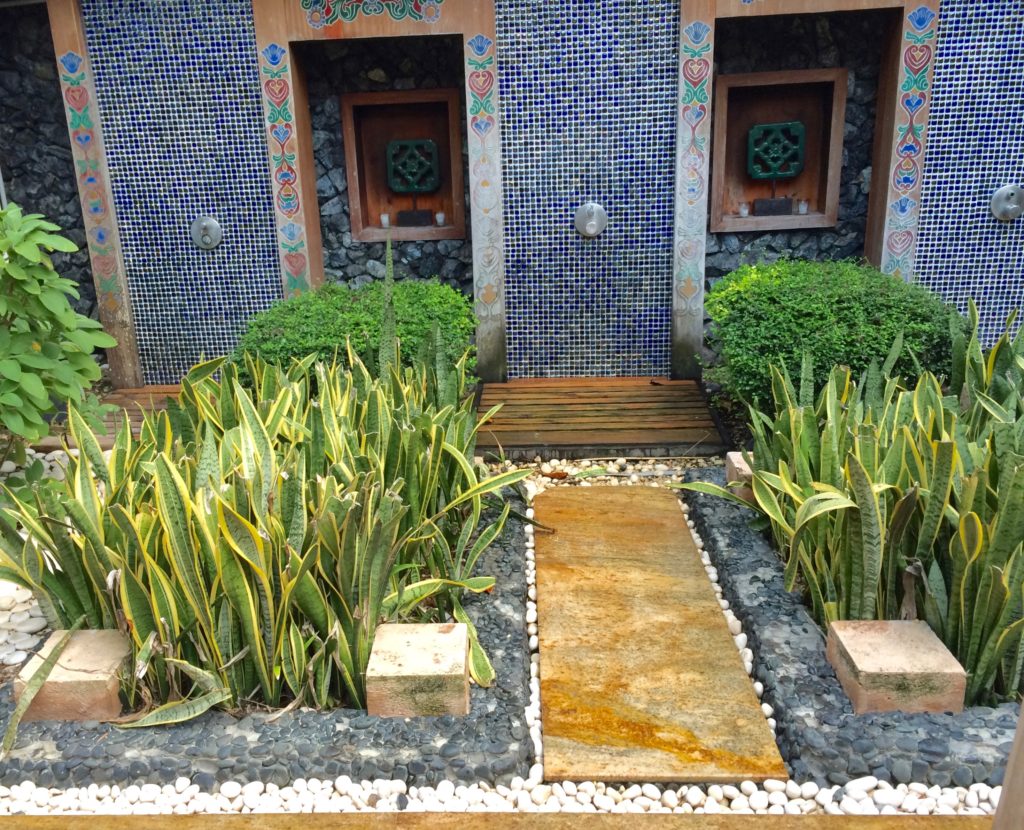 On the way to the banos at Boca Marina

On the pier, Needlefish swim near the  steps entering the water. After dark, lights under the water gave them an iridescent translucence. 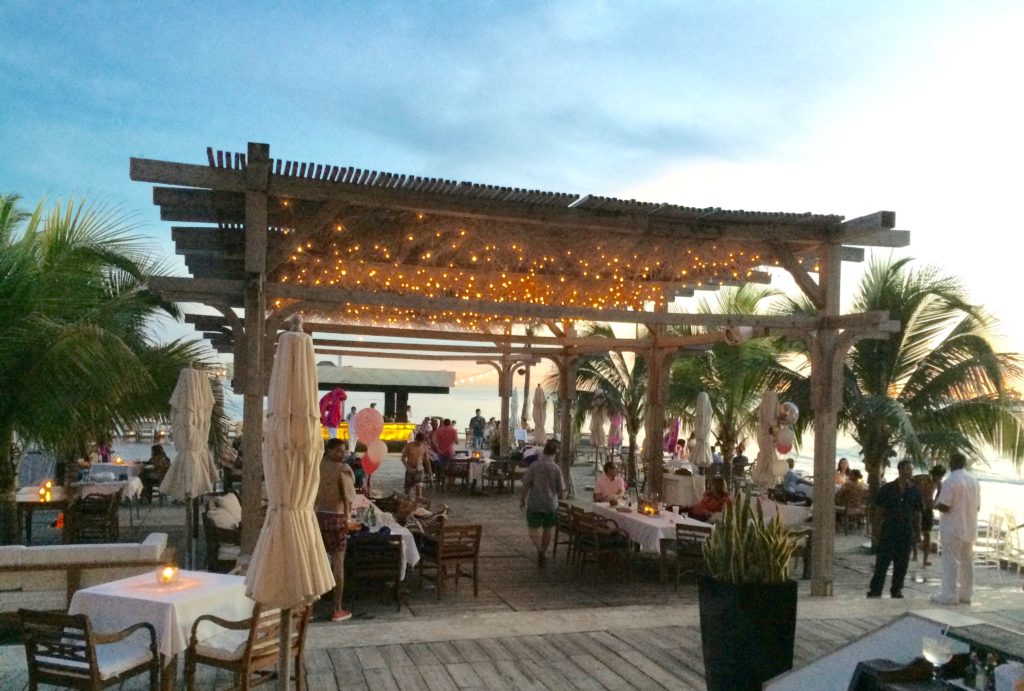 Dining on the pier at Boca Marina Restaurant 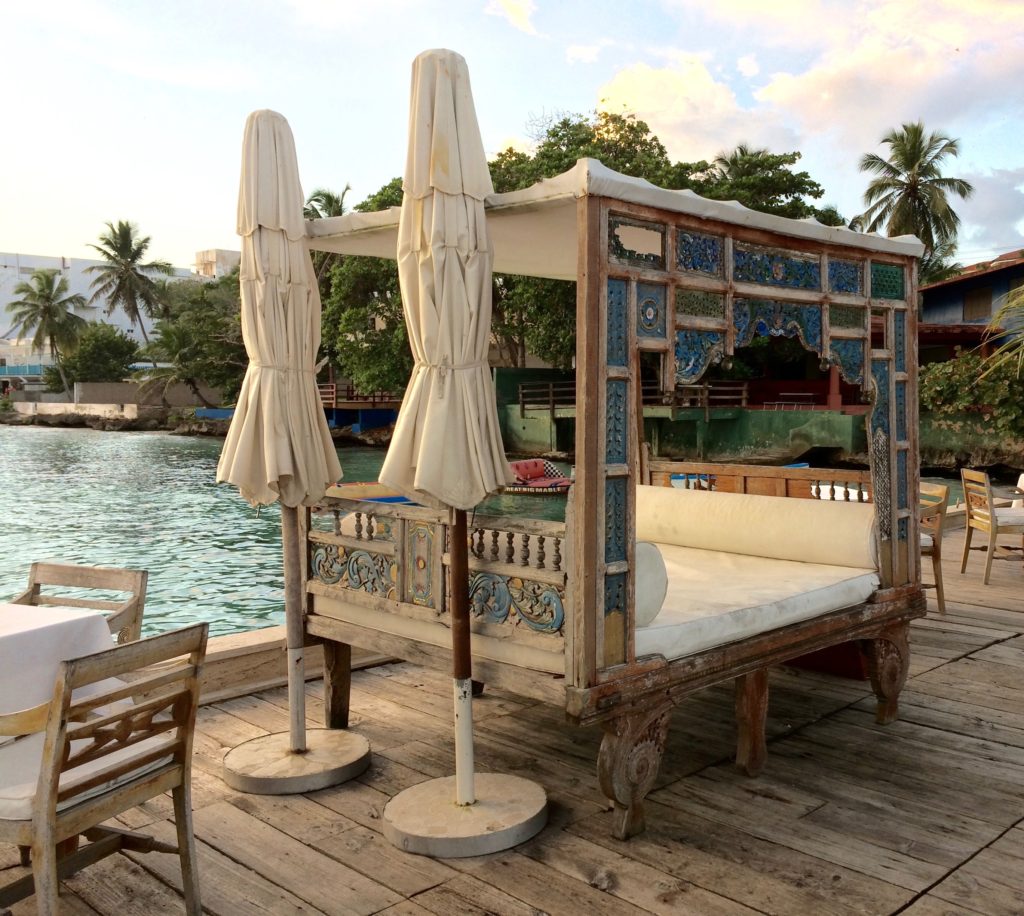 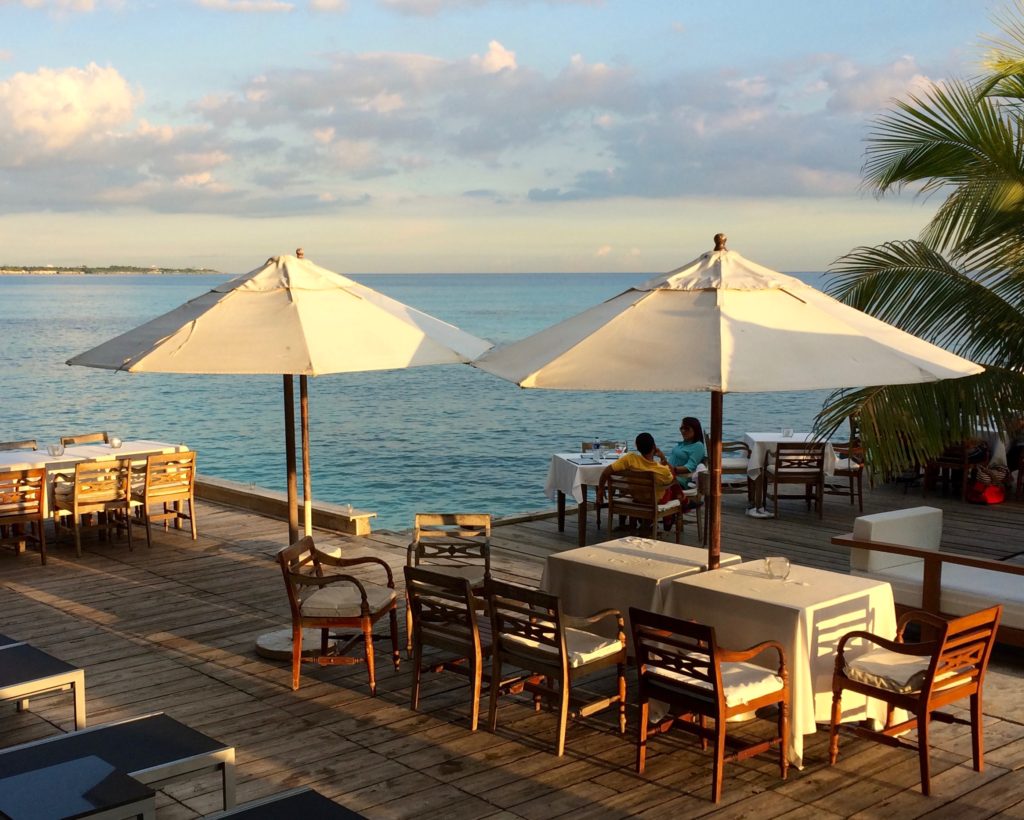 View from the pier at Boca Marina

Unfortunately, the evening was marred by two things. We came with a large group and despite ordering first, we were served last. So late in fact, that all in our group had finished their meal before we were served our expensive seafood platter for two. We had thought it would be grilled. Not so. Fried and oily.

The second problem was the awful music track. Wouldn’t you think a restaurant catering to the tourist ethos of Caribbean island romance would consider their music as a vital aspect of the ambience? Wouldn’t it be smart to hire homegrown musicians who would play catchy Caribbean beats and a vocal soloist with a repertoire of Spanish love songs? Instead, we were blasted all evening with 1990s techno.

Incidentally, music track selection is a basic problem in every nice restaurant we’ve visited throughout the DR. The volume is always so loud that we have to shout across the table. Moreover, it’s generally outdated Americana. Does the DR think it has to catch up somehow? But catch up to what? To techno that was only good for dancing–never listening? To rap that is rhythmically monotonous with angry, vulgar lyrics?

While I’m living in the Caribbean, I want the music to take me away to something beautiful.