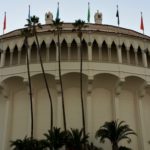 What creates the mystique of Santa Catalina? For me it all began with a popular song I heard as a child that played long afterwards in my imagination. The Four Preps sang a bouncy tune with the lyrics, “Twenty-six miles across the Sea, Santa Catalina is a-waitin’ for me, Santa Catalina, the island of romance.” The crooners restated it in another verse as “40 kilometers in a leaky old boat,” assuring the listener that the romance stayed the same. Apparently, we were supposed to believe the island experience transcended class. To my teenage mind, of course it did!

We found this bit of fish-shaped memorabilia in the Casino museum. (I’ve made the photos extra-large so you can read the lyrics — yeah, they’re kind of sappy, I know.)

“26 Miles” at the Music Festival 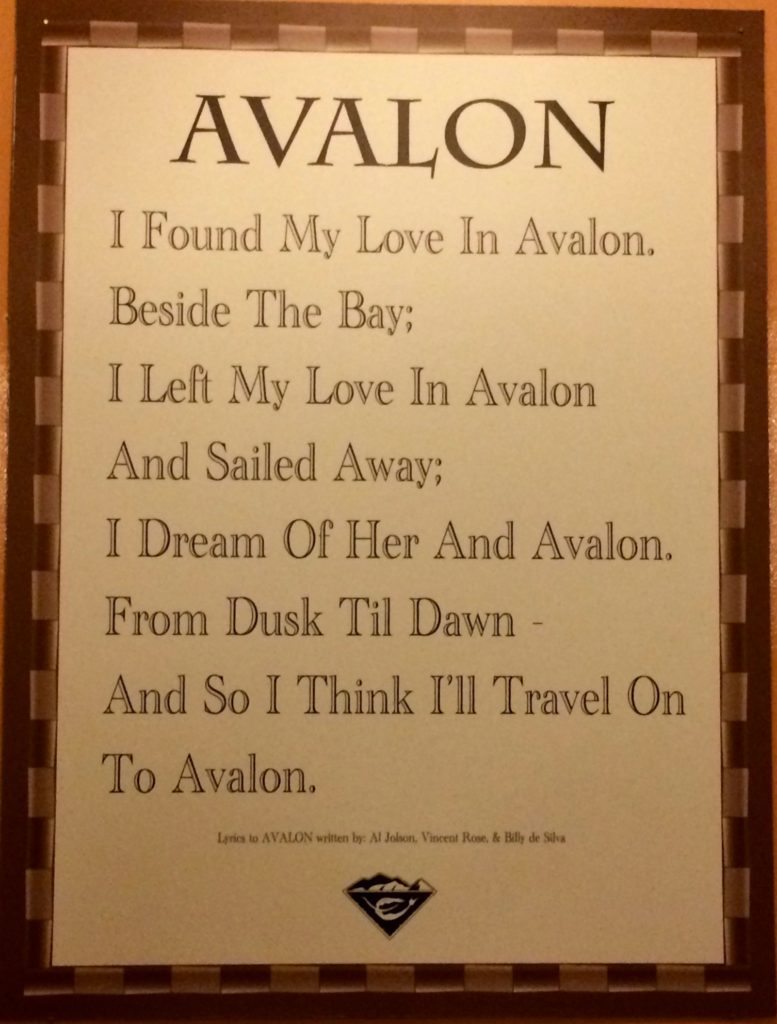 On a tour of the casino we found a plaque containing the lyrics of another celebrated song about Avalon. This one is far earlier than my time, composed and made famous by Al Jolson et al. Question: has anyone popularized a song about Avalon since then?

If you want crisp and precise, don’t go to Avalon. If you want fluid and evocative, you’ll love it here. We often felt like we were in the Mediterranean, definitely not California. The water came warm out of both taps, but ice was available up the stairs and to the left for anyone fiercely American in their tastes. 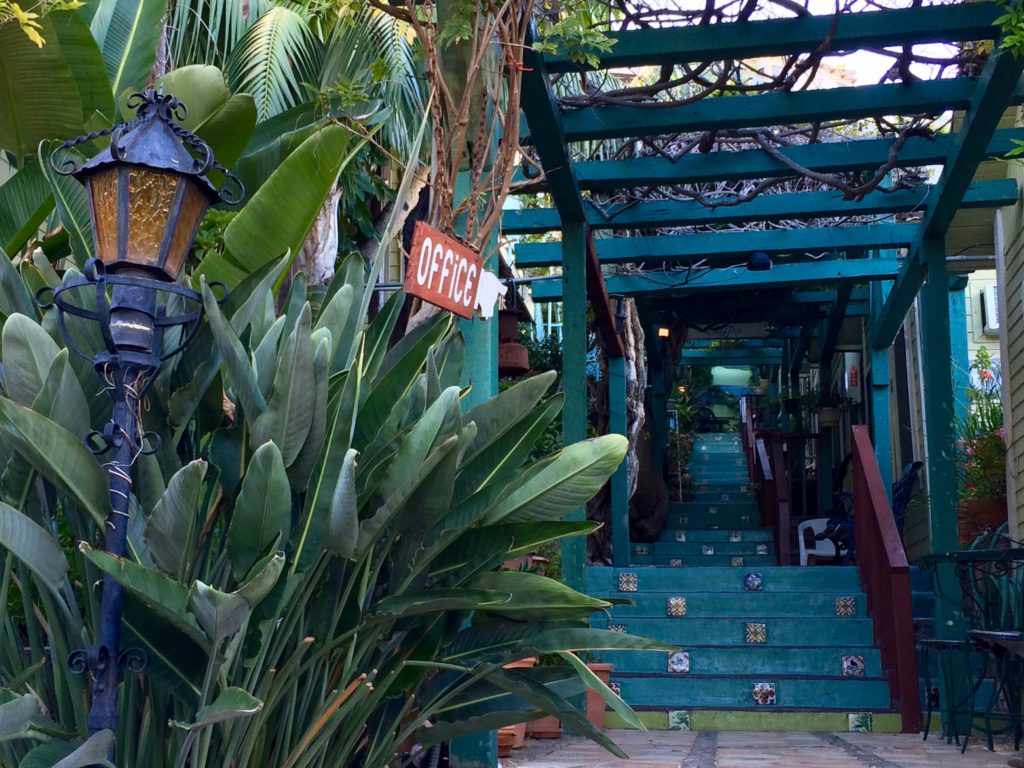 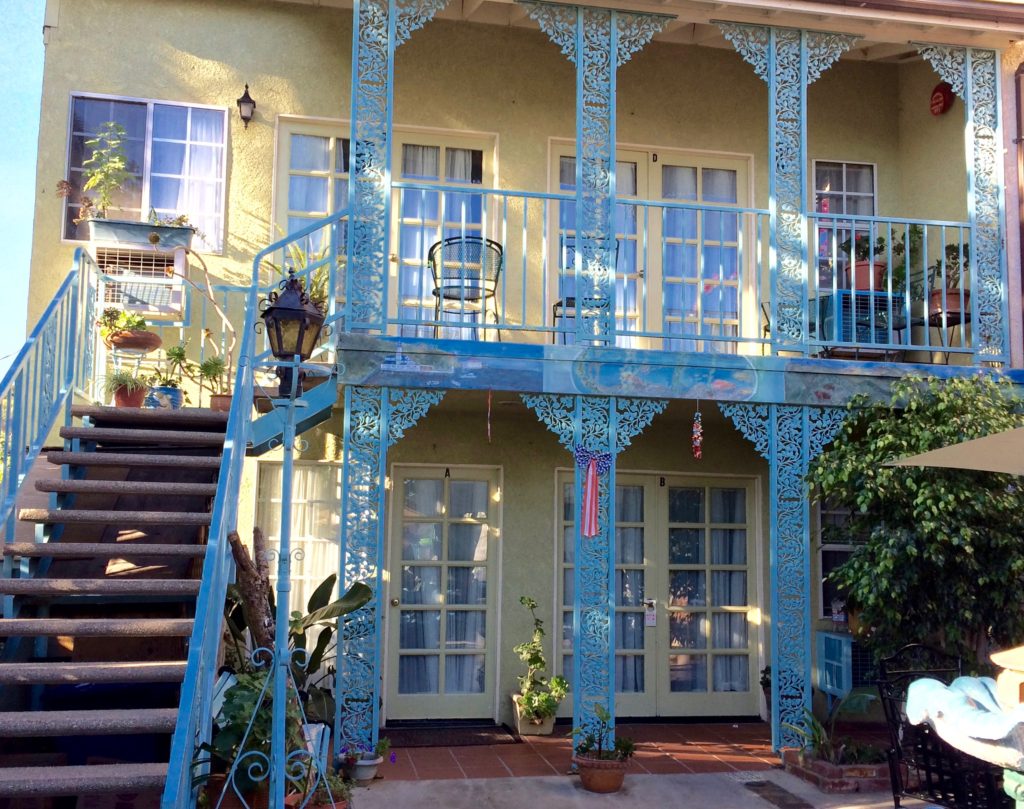 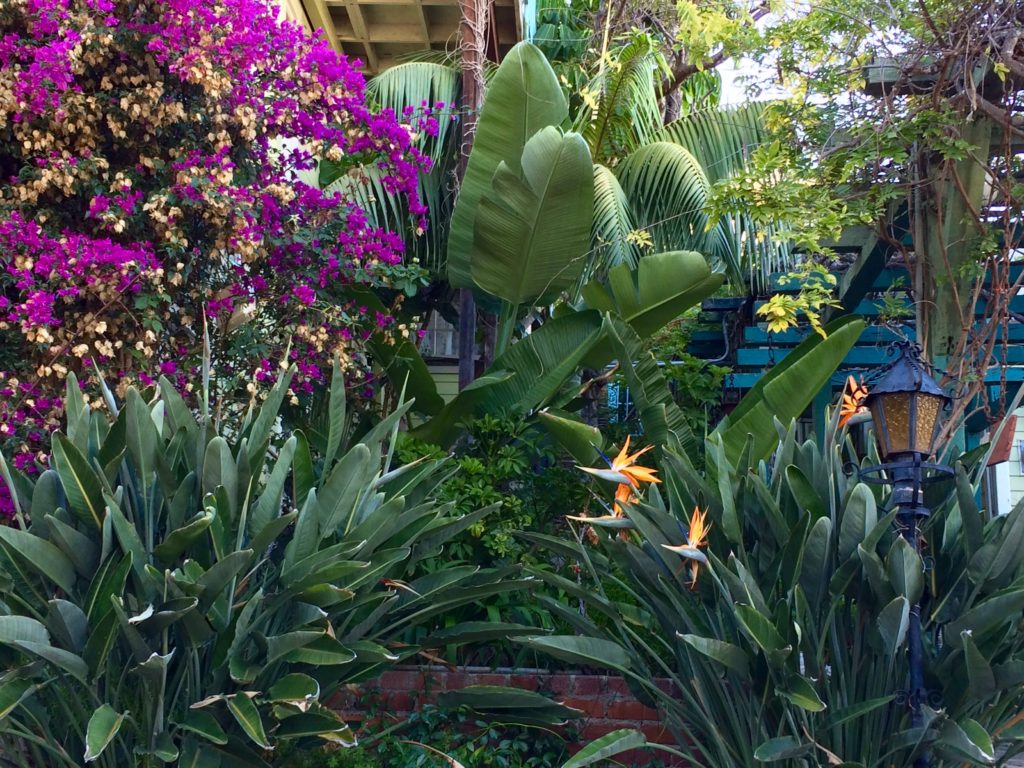 The architectural style of curving arches and white plaster facades on certain buildings created a Mediterranean feel to Santa Catalina’s waterfront. Similarly, the decorative tiles on fountains and walls displayed color and pattern that became evocative of the arts on the island. These two beautiful fountains, for example, immediately catch the visitor’s imagination. The island was experiencing a multi-year drought during our visit, so no water sprayed from any of the fountains in the city. As you can see, one was planted to greenery. 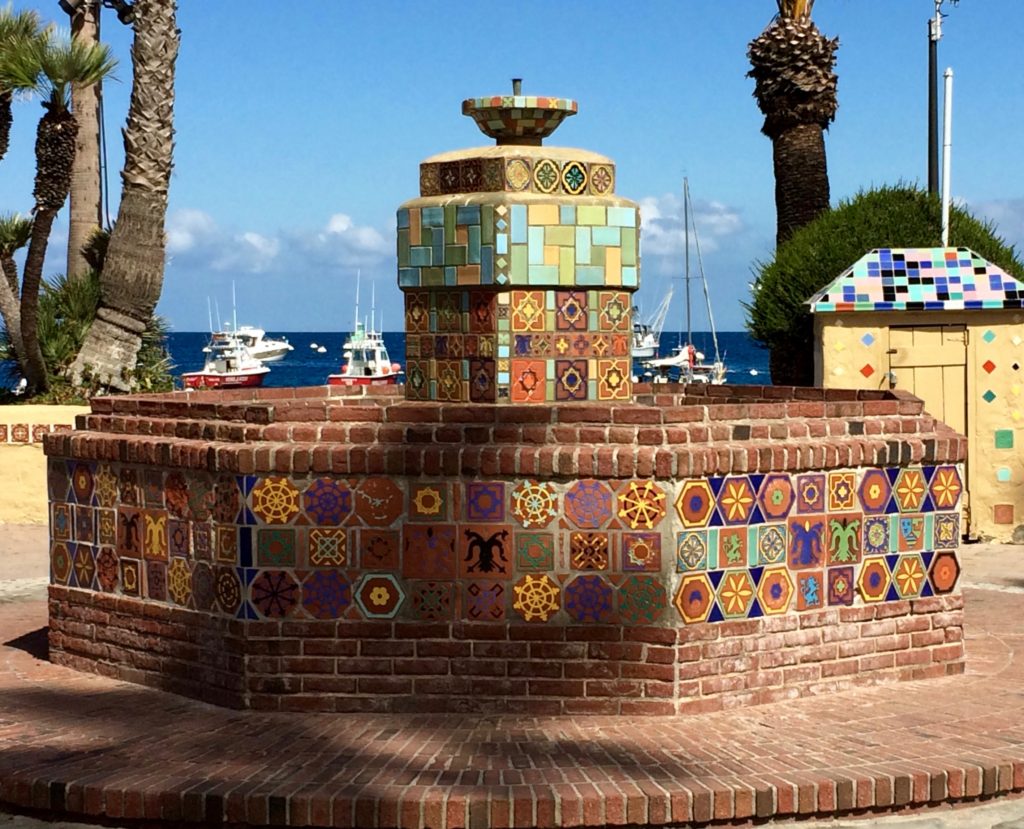 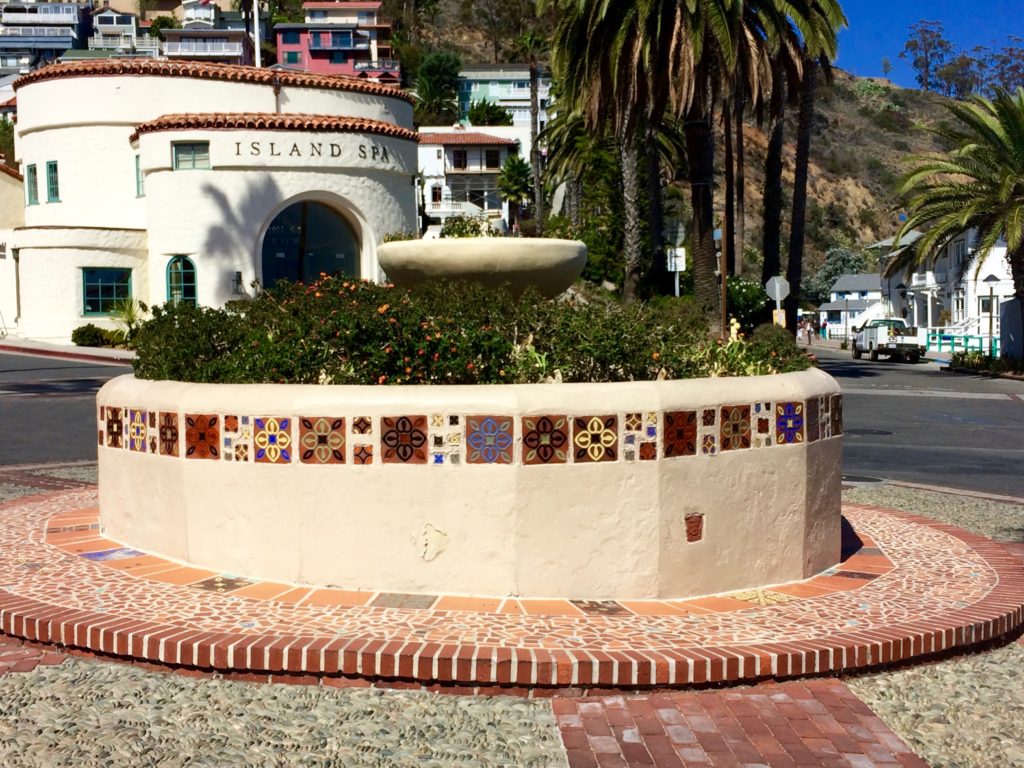 We learned that tile work has long been cultivated by artisans in Santa Catalina. In the Casino museum, we found signage informing us of the history behind the tiles in the area, as well as many lovely designs. Shops in the main shopping area of town (along the Avalon Beach area) often showed jewelry using tile motifs. We found a particularly nice collection in the front sales area of the Island Spa. 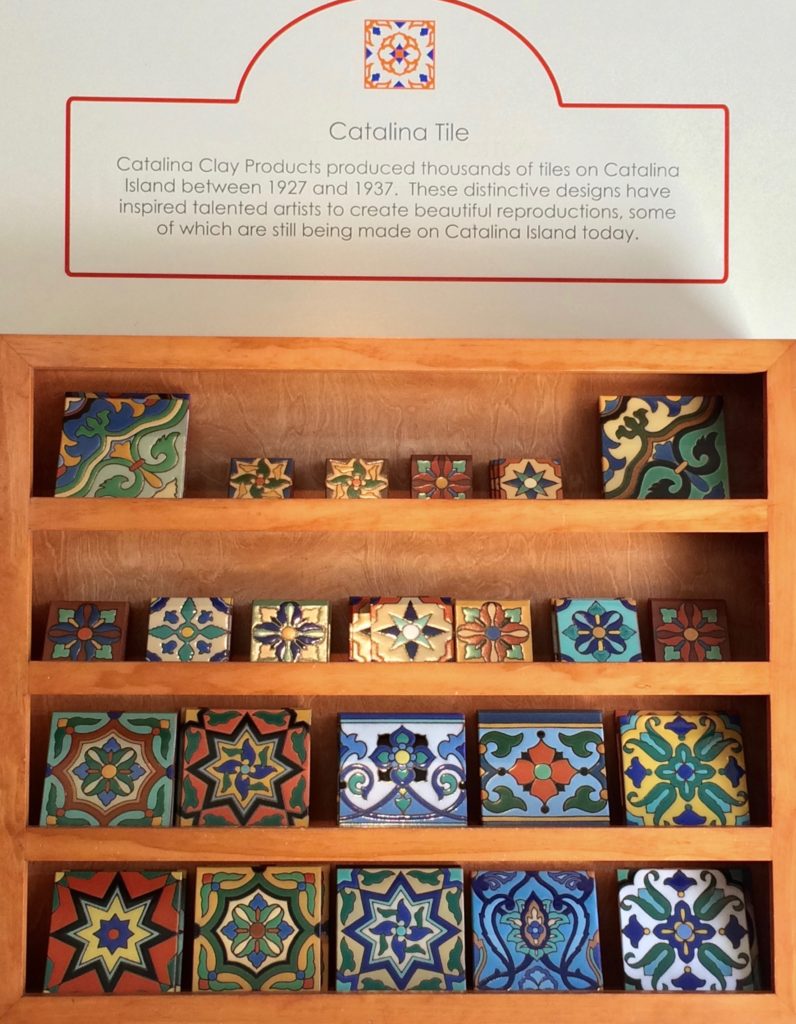 The tiles continued along the walk-way from the central square to the Casino. Below is merely a small section reproduced as a sample of quite a large-scale work. Many of the ceramics gave the history of the aboriginals on the island, a theme repeated in the theatre on the main floor of the Casino.

Mural tiles along walk-way to casino 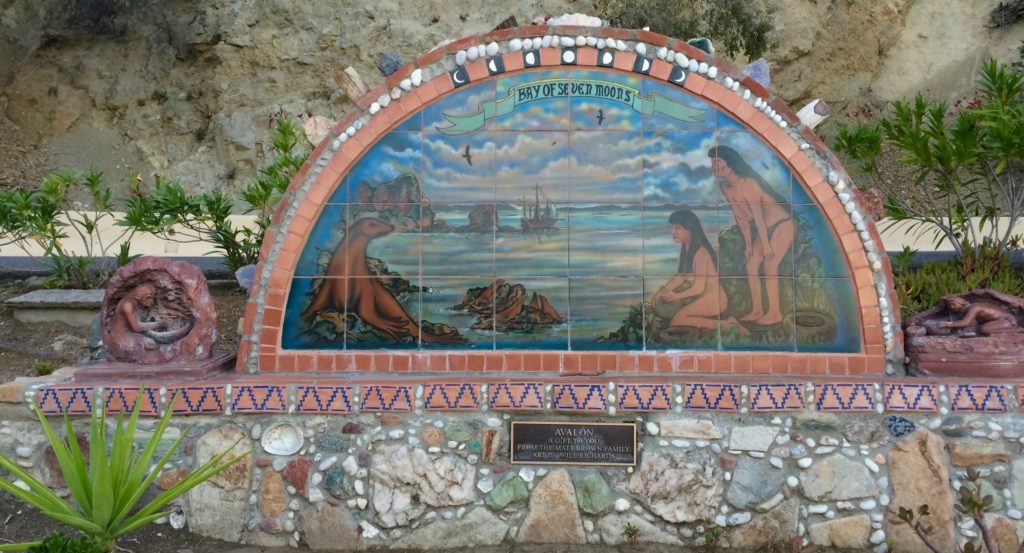 Historical marker along walkway to casino 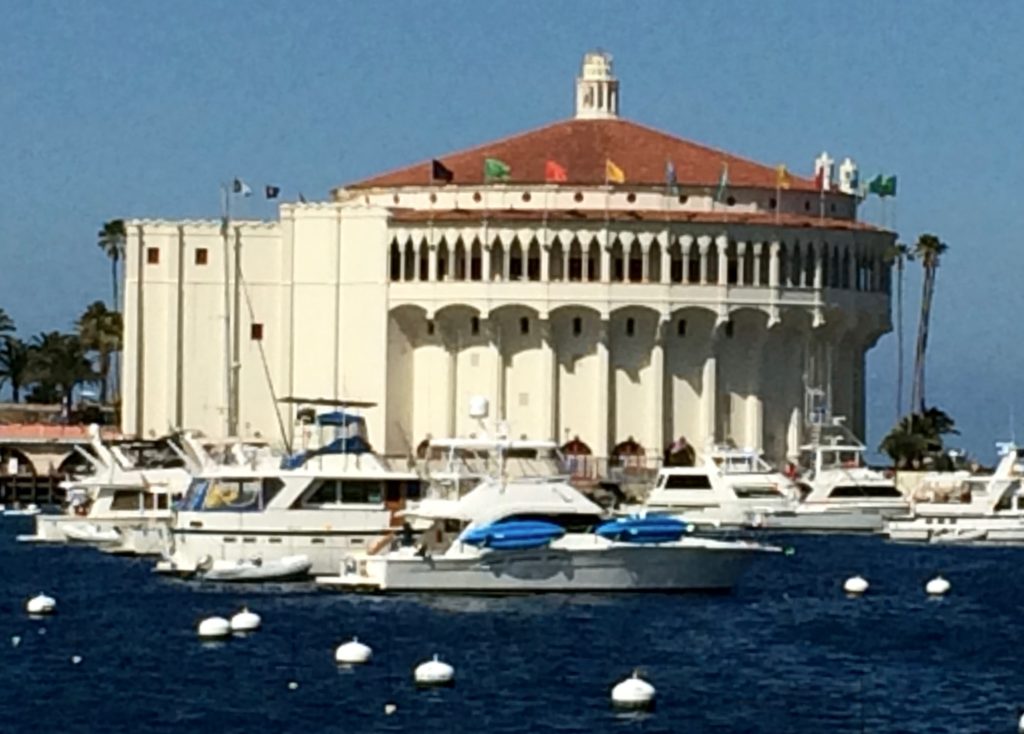 Another part of the mystique of Santa Catalina that I recalled from childhood included whispers of gossip about the rich and famous, or Hollywood celebrities like Marilyn Monroe who came to the island to play. The idea of a whispered indiscretion is a far cry from the trumpeting that occurs all over social media these days, isn’t it? Much of the content of the Casino museum is dedicated to the stars and the famous politicians who courted them. In some ways it created for us the sense that while in Avalon we were walking through a movie set, a period piece.

As you enter the Avalon Bay, the Casino is a visually dominant landmark before your boat ever docks on the island. Most of us have a uniform response to the word casino: gambling. As in Las Vegas and Reno. Not so for Santa Catalina’s casino. A plaque near the front entrance dispels any such notions. Other plaques found throughout the building tells of its unique history. 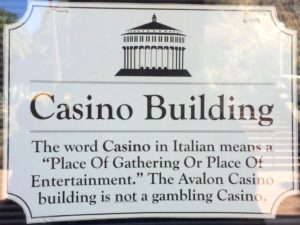 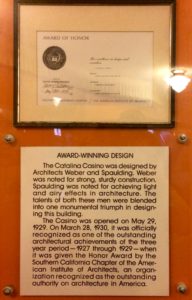 The interior is still very grand. During the Big Band era a different big-name band came each weekend to entertain crowds of dancers in the second floor ballroom. 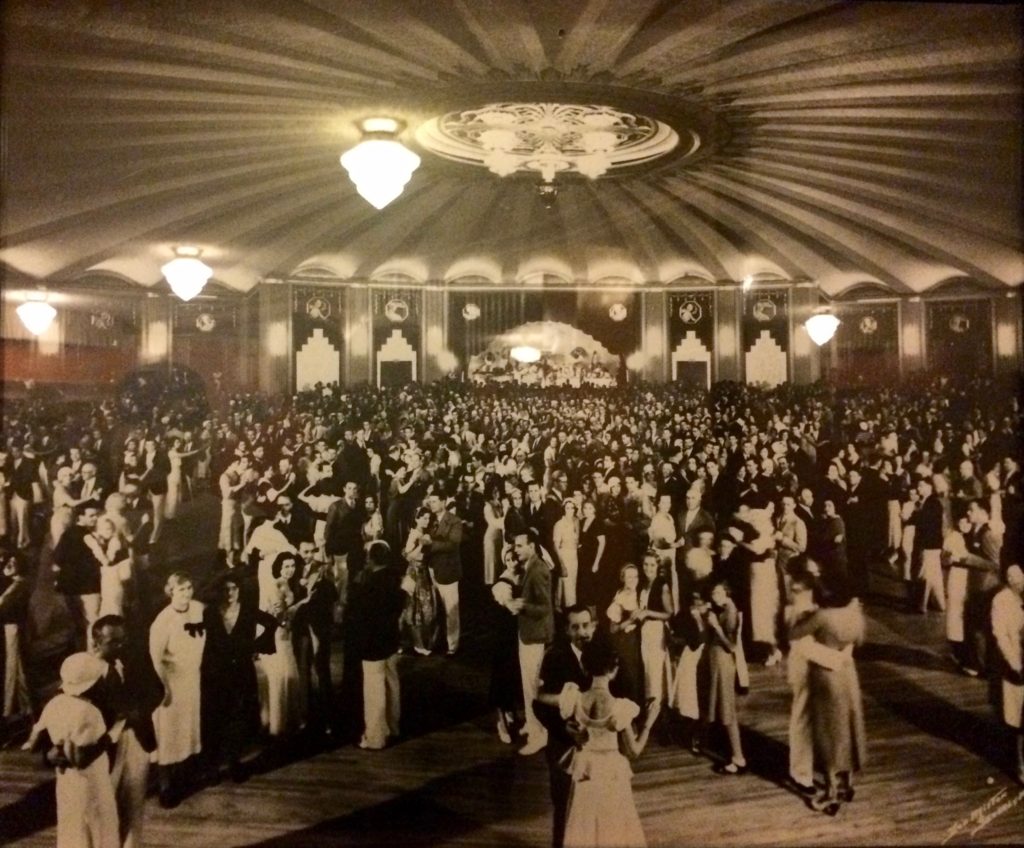 Dancing in the Casino ballroom 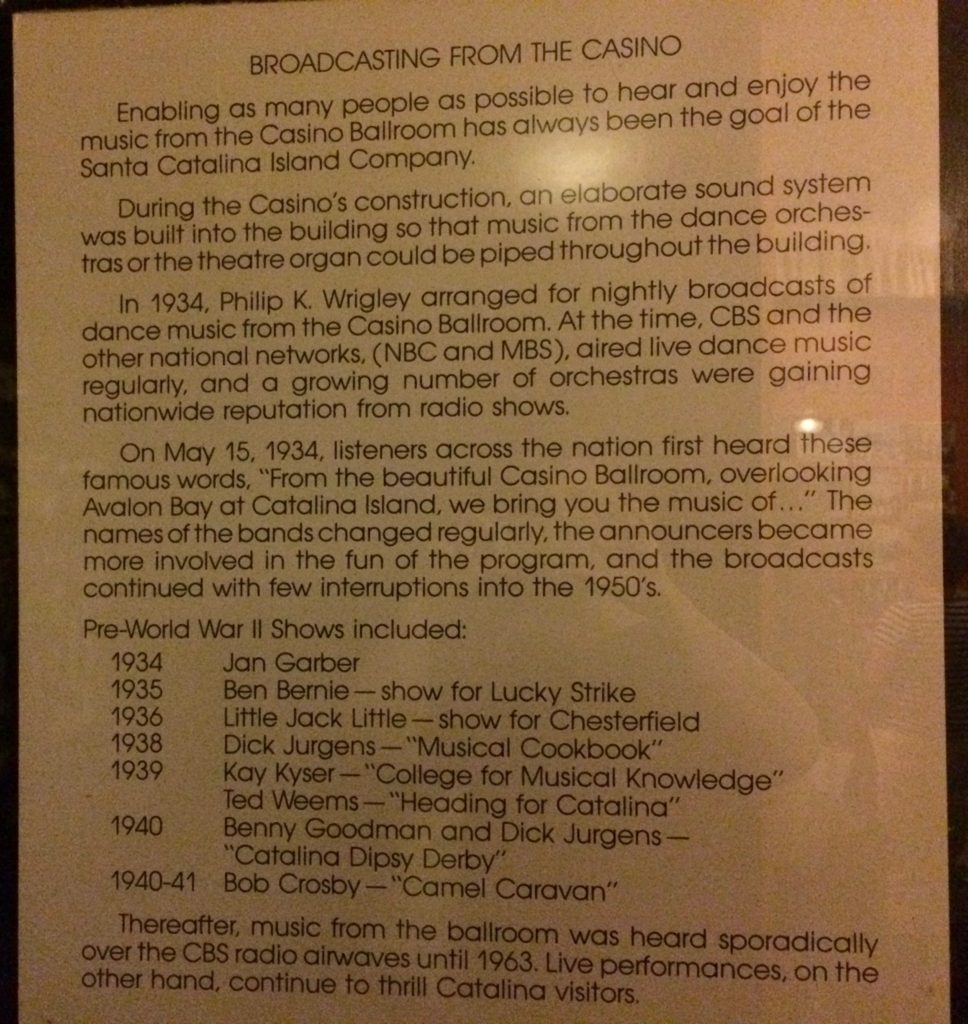 The ballroom is still in use today for special events. The day we were there the Casino administrators allowed us access to the area even though they were setting up for a week-end gala. None of the photos I took give it justice, so I’m only showing you the beautiful ceiling fixture, the balustrade on the Avalon Bay side of the Casino, and the view of Descanso Cove from the vantage point of the second floor. But I’d love to come back to the Casino if I could figure out how to be invited to a ballroom event. 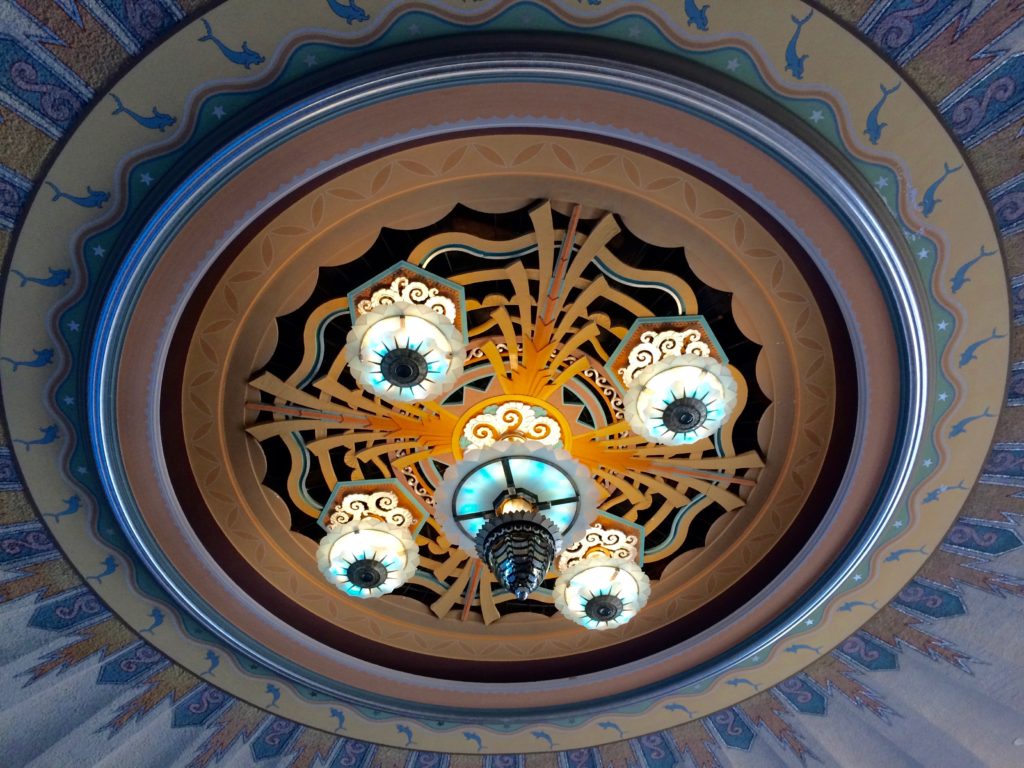 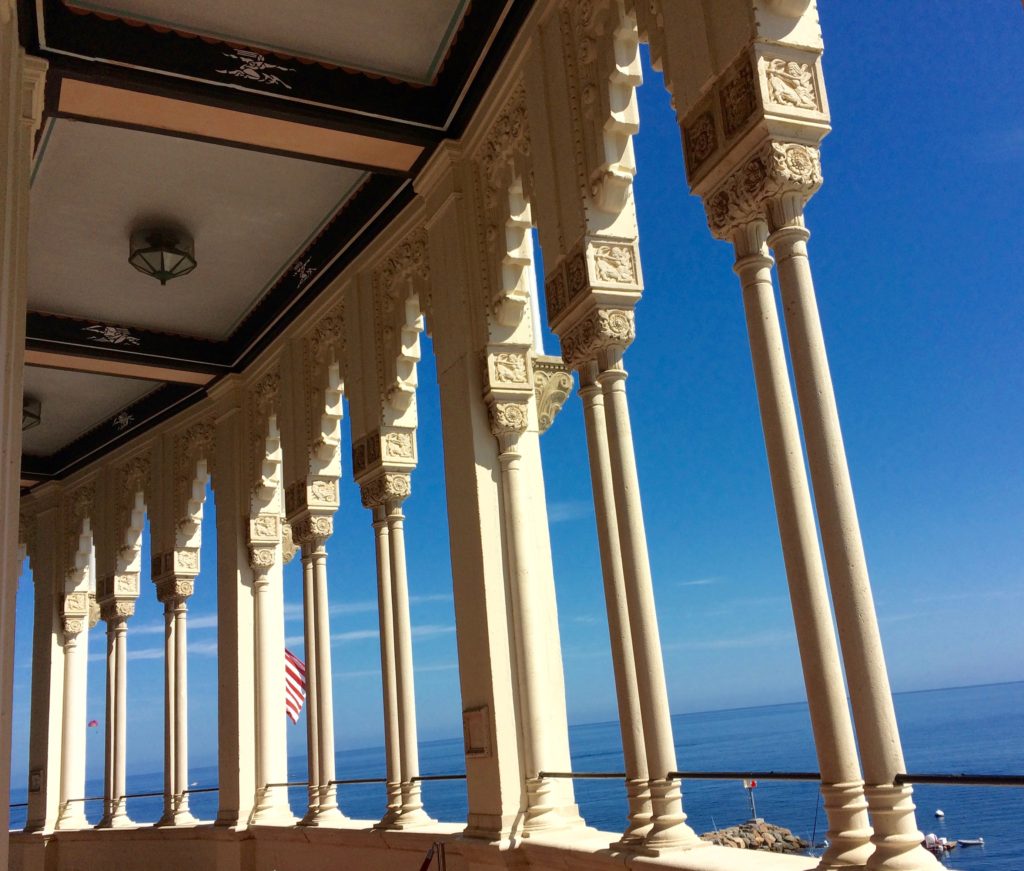 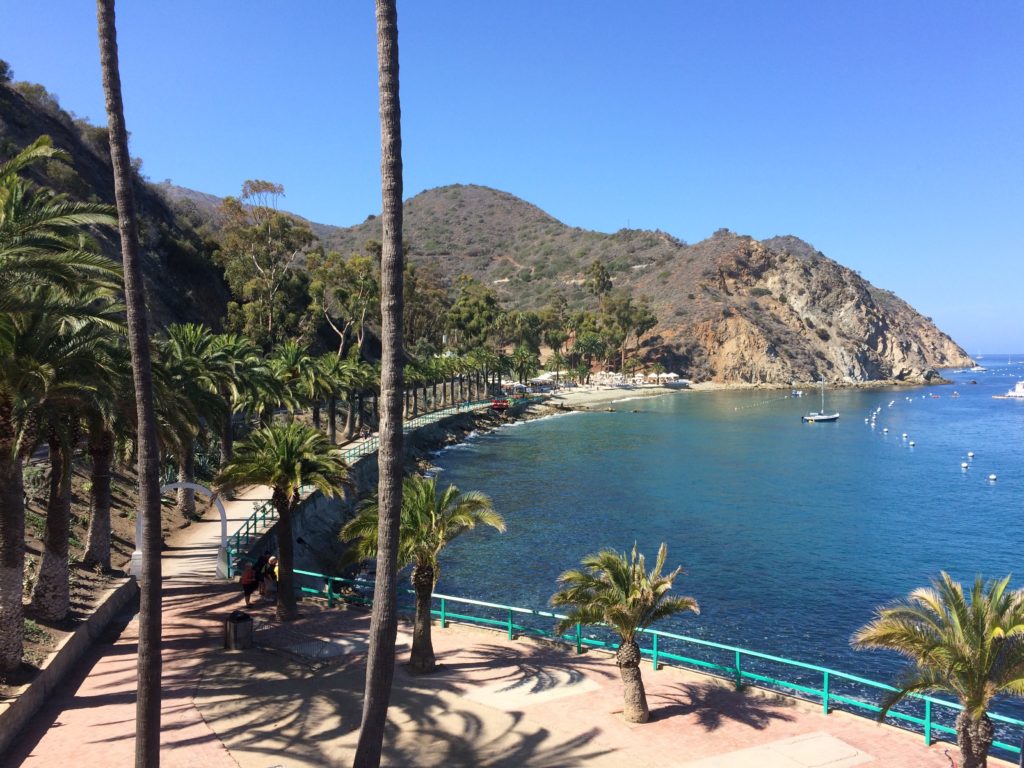 Nowadays, a giant movie screen has been added to the concert hall. Every evening the town shows a new release movie in what has to be one of the world’s best movie theaters. 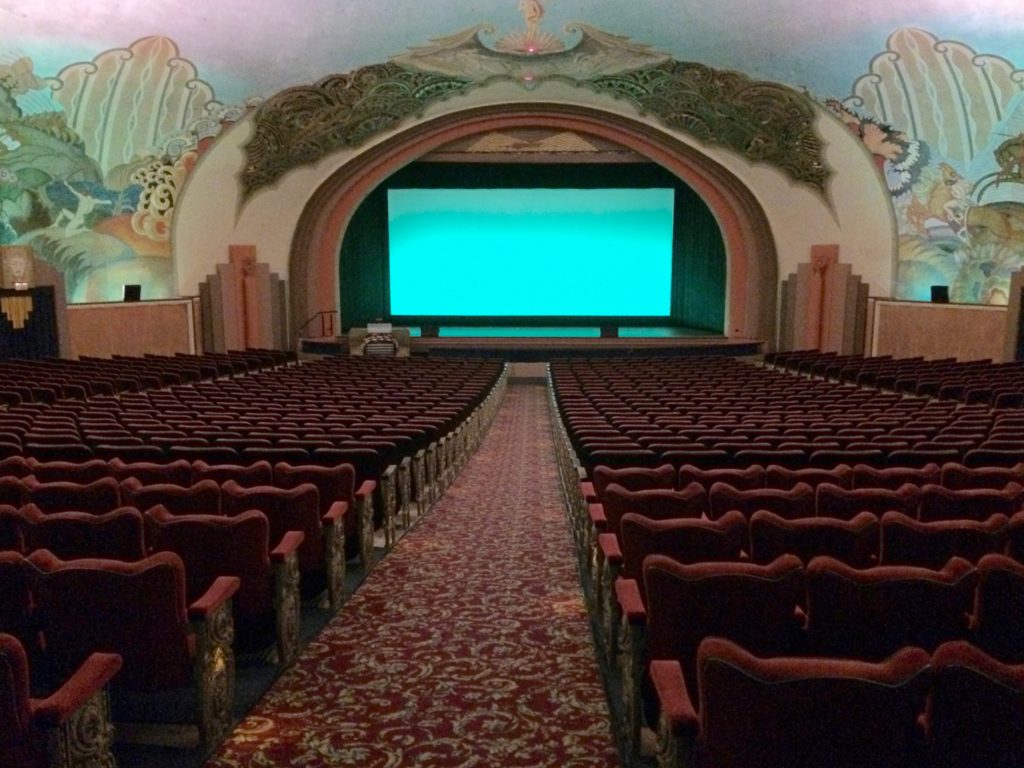 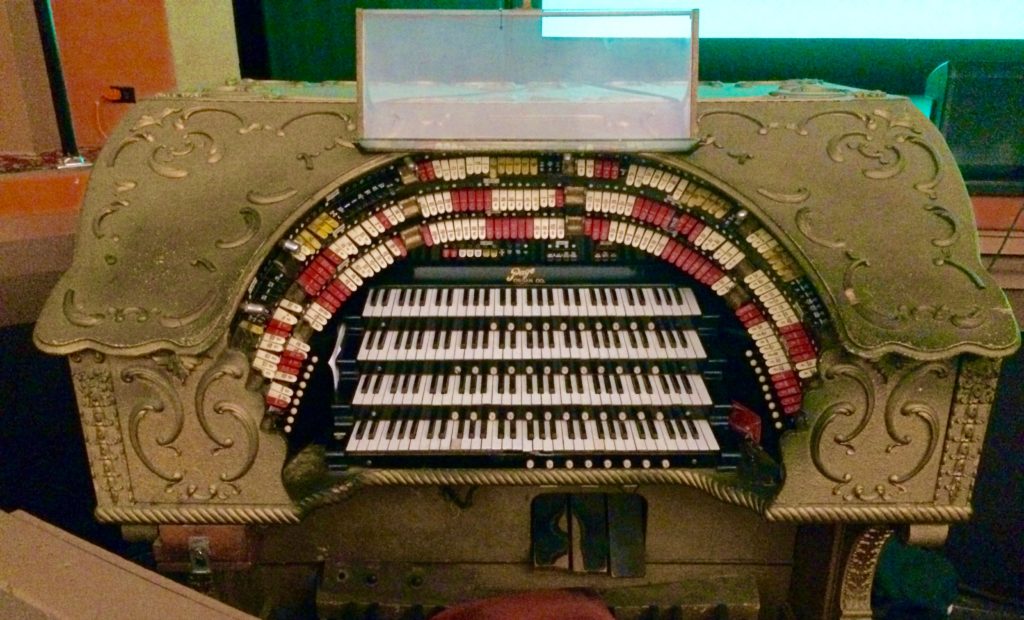 Incidentally, on the days of our visit they were playing probably the scariest movie Johnny Depp has ever made. I’m not even going to tell you the name of the movie because I don’t want to give it any press whatsoever. The only way to dispel fear is to have good triumph and evil punished, as we see in the darker fairy tales. Don’t bother seeing it unless you enjoy feeling awful. I wish I’d walked out. I kept believing something would develop from it, but the film doesn’t allow any kind of cathartic opportunity.

The Miracle of Water

Some of the vistas on Santa Catalina Island show a countryside drastically parched from the years-long California drought. But every once in a while, we get a view of what the island would look like if water were available. The photo below is a contemporary golf course (no surprise), but in its prime Avalon was home to baseball greats whose teams came to practice their game before the season began. 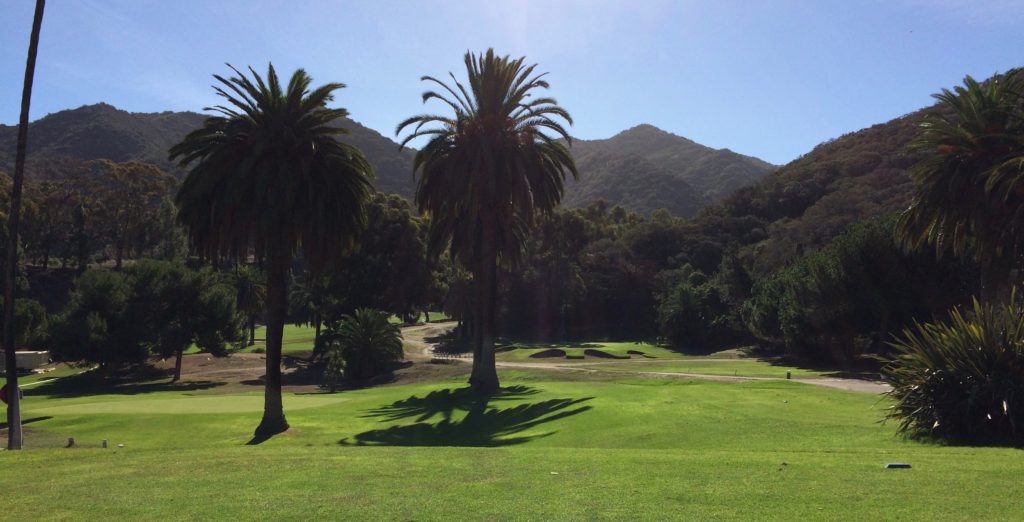