Ways to experience Sedona, AZ, may well be infinite. The first time I came to town was on a short lay-over with a friend on our way to Tucson. I didn’t know much about vortexes or crystals, which seemed to be a major focus of the citizenry and struck me as a little exotic and strange. Since we had so little time, we mostly browsed the art shops and caught some excellent Mexican cuisine. But I was smitten with the drama of evergreens growing on red rock and vowed to return. 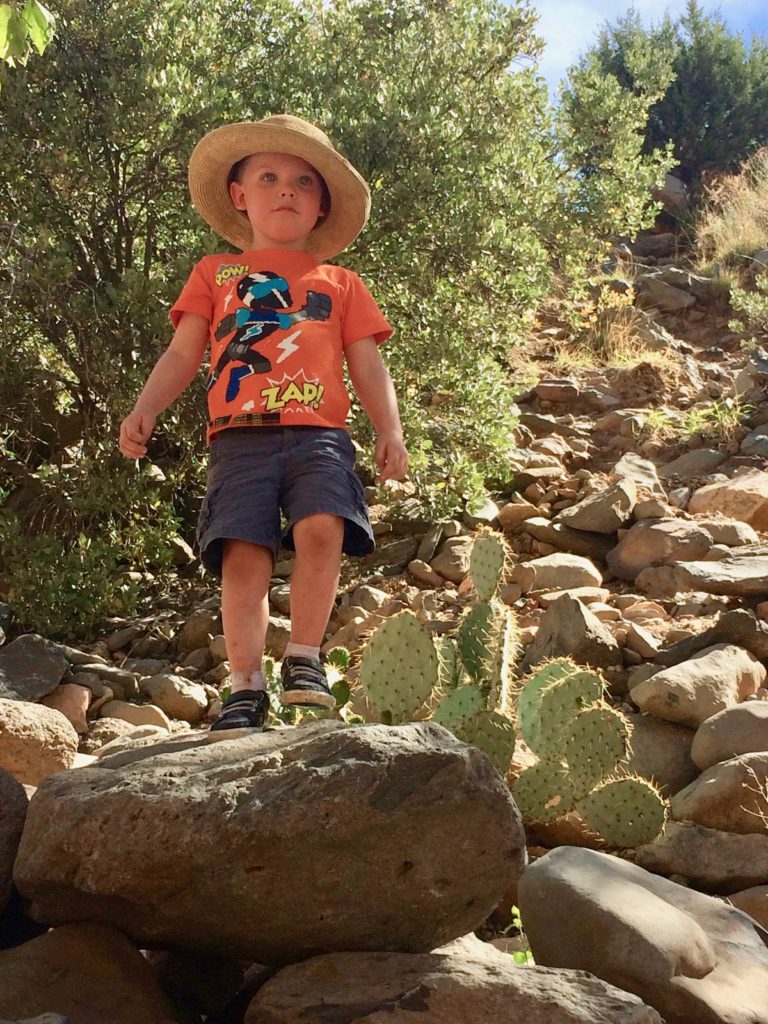 King of the Rock

It took a few years, but this time I planned my Sedona visit as a mother-daughter retreat. I knew a little more about vortexes and crystals this time round, so it could have been something of a hiking, star-gazing, vortex-hunting trip. But life intervened.

The party-crasher was my adorable three-year-old grandson. Needless to say, we were a little light on art galleries, vortexes, and crystals, this second trip, and we were all focused on how to experience Sedona through his eyes. Several websites suggest how to see the area with children, but our young traveler’s age set specific parameters for us.

For Love of Rocks

I soon discovered that rocks were my grandson’s great preoccupation. Throwing them, tasting them, stuffing his pockets so full his shorts sagged to his ankles. Sedona was definitely the perfect destination for him!

And standing on the top of a rock was his greatest thrill. I’d watch him haul himself up, his hands and legs working, then stand erect on top, a mighty conqueror.

One reminder: Even though our visit to Sedona occurred in early May, we needed sun hats, plenty of water, and a really good sunscreen. Make sure it’s water-resistant, at least SPF 50, and that you spread the cream on generously and thoroughly. (Sprays and sticks are dicey to apply on little ones.)

At an altitude of over 5000 feet, the desert sky is cerulean blue, and the sun relentless. The temperature was still moderate in May, but the chance of burning and dehydration is real. This is important to remember in Arizona, especially when you’re outdoors for a hike like we were, but there can also be significant exposure when in and out of cars and shops.

We decided that a visit to Slide Rock State Park in Oak Creek Canyon was the perfect first-day activity. Rocks of every size everywhere. To get there, take Hwy 89A north of Sedona for seven miles. The entrance is well-marked. Exploring the historic buildings of the old apple farm would doubtlessly prove interesting on another visit, but the focus of our 3-year-old was rocks and water.

The approach is categorized as moderate difficulty. While it did seem a bit rugged particularly at first, at no point did we need to carry him. We all wore sturdy runners with absorbent cotton socks, and we took it child-speed. Interesting to see which rock he found irresistible, which bug deserved surveying, and which pool of water was most inviting.

Further in, the trail follows the creek on smooth, weathered, red sandstone. As you can see from the photo, the creek water is so clear that it exactly reflected the rocks above. 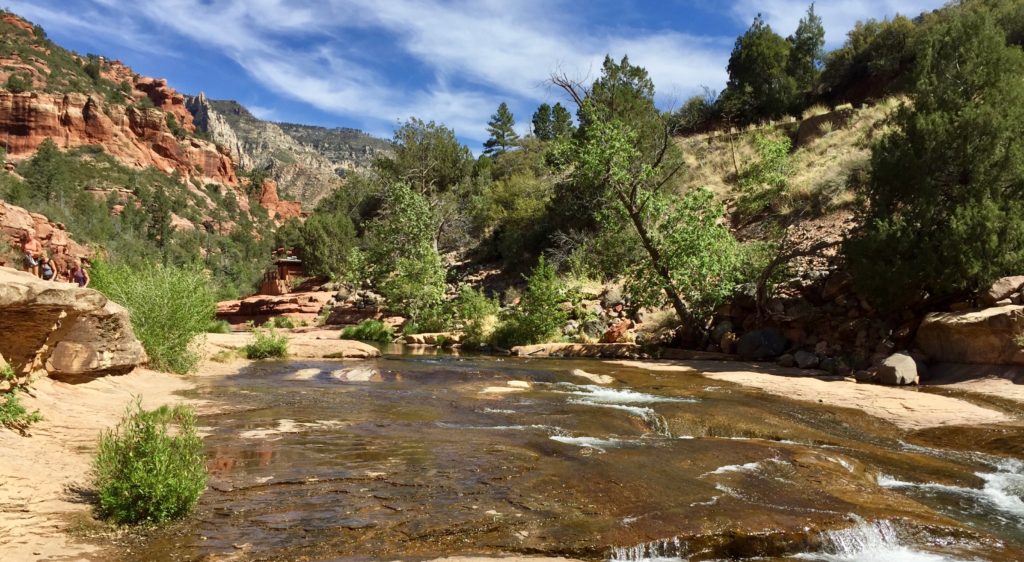 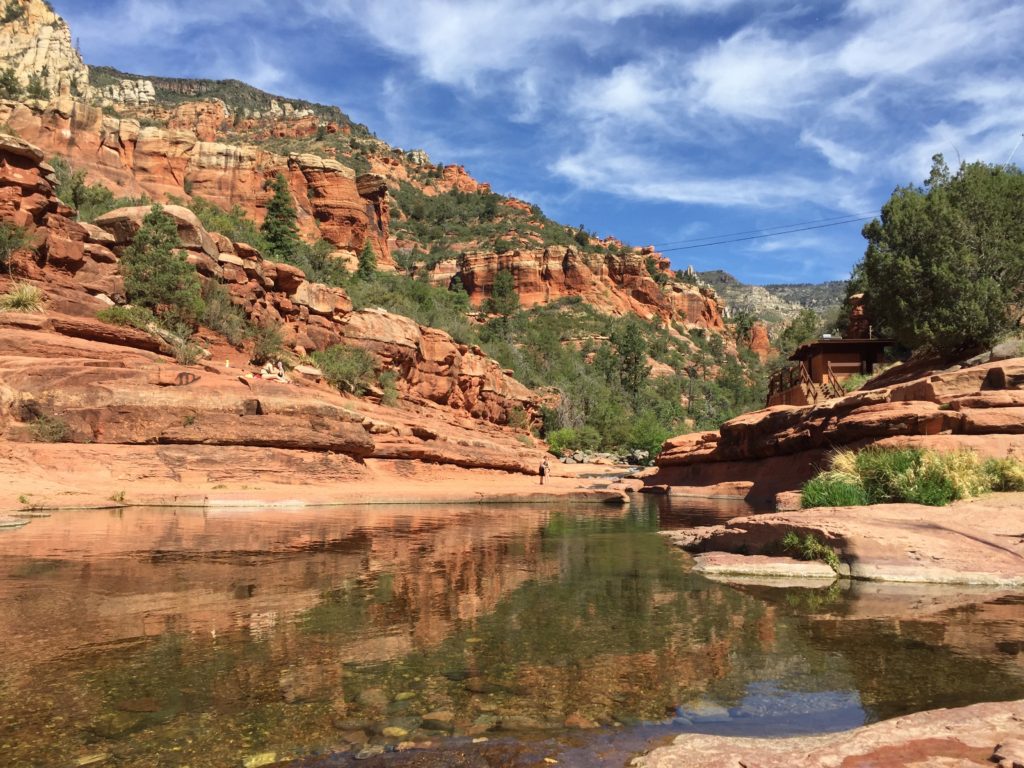 Hike in on the left side of the creek

The sliding part of the name Slide Rock State Park took only about half an hour to reach, even at a child’s pace. The water rushes down a channel just wide enough to carry the slider along. Since the water is very cold even in May, most sliders shrieked in delight all the way down. May and June are typically the driest months, so these photos show low-water levels. 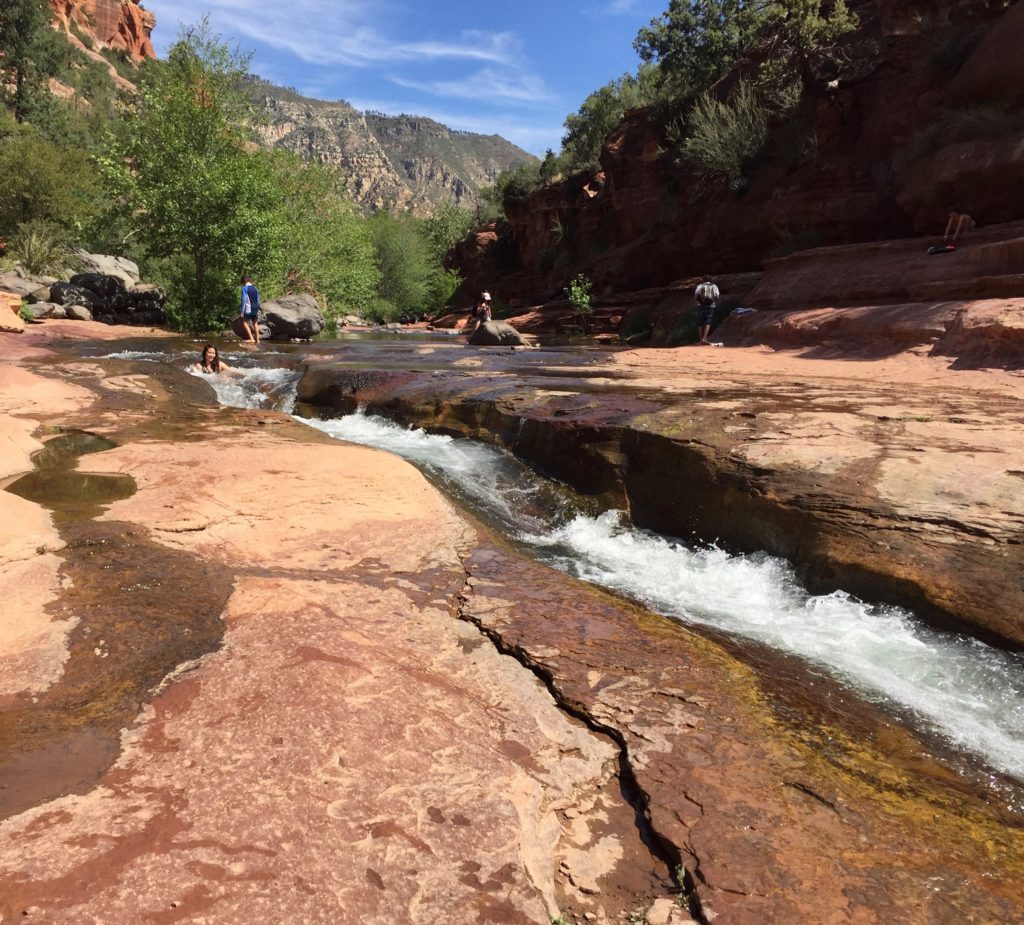 The water moves rapidly, and the youngest sliders we saw were probably about age ten or twelve. Our little man would have jumped right in if we hadn’t been vigilant. So we took him back to the hotel pool where he could throw himself into the water with safe arms to catch him. 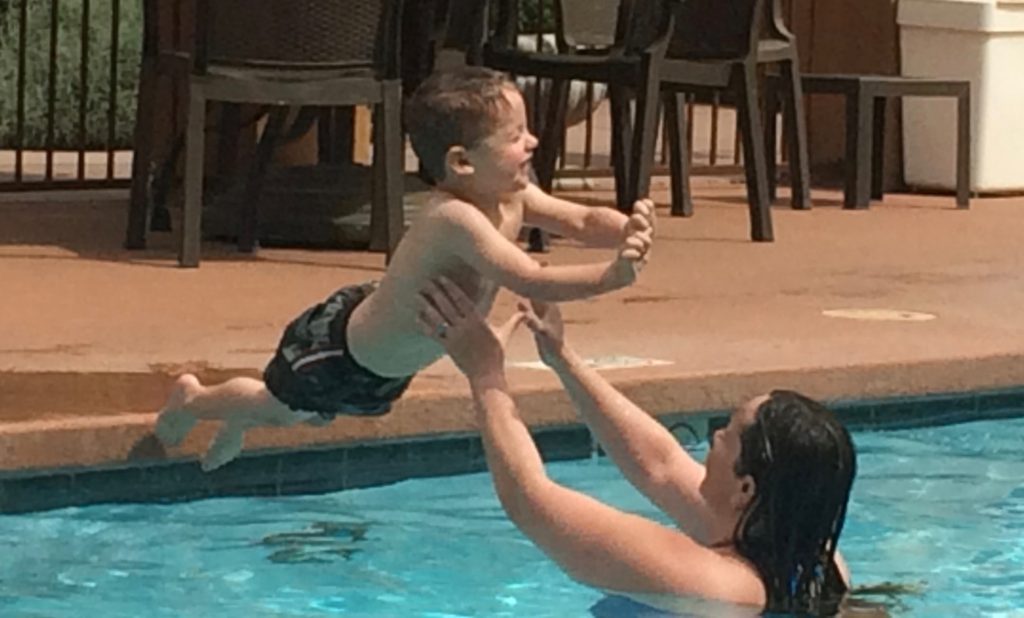 For more on how to visit Sedona, AZ, with a small child, go to my blog “Exploring Beautiful Tlaquepaque in Sedona.“