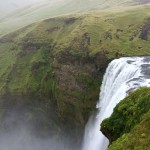 The waterfalls of Iceland in all their beauty and frequency became a distinct pleasure during our visit. Wherever there was a height of land, there was an accompanying cascade of water. The waterfalls became the punctuation to the landscape.

By the way, the Icelandic word for waterfall is foss, so you don’t need to say “Gulfoss waterfall.” I expect they have all been named, but the casual visitor wouldn’t necessarily have access to that. So, I’ll just call the two pictured below “twin falls” (with no capital letters, out of respect to the locals). I wonder if native Icelanders kind of stop seeing the waterfalls. Otherwise, how would they get places on time?

A country of waterfalls

Whenever we spotted a new waterfall, the driver was obliged to pull over so we could admire the scene. For some reason I always needed to touch the cold wetness as I listened to the music of the water. Sometimes quiet admiration was the only way to pay homage to such beauty.

The breadth and power of Gulfoss is exciting, yet humbling. I find it impossible to feel that my corporeality amounts to very much when I’m standing beside a force of nature like this. Equally as impressive as the waterfall, however, is the story of how one woman galvanized popular support in the country to save the falls from commercial development which would have destroyed it.

Look at the contrasting textures and colors in the photograph below. Isn’t that superb? When I was there and experiencing the thunder of the falling water, the rising mists that dampened my skin, the nearly perceptible trembling in the pathways, I was more aware of the physicality of it all. Its only in reviewing the photos I took that I can fully appreciate the hues and contrasts. 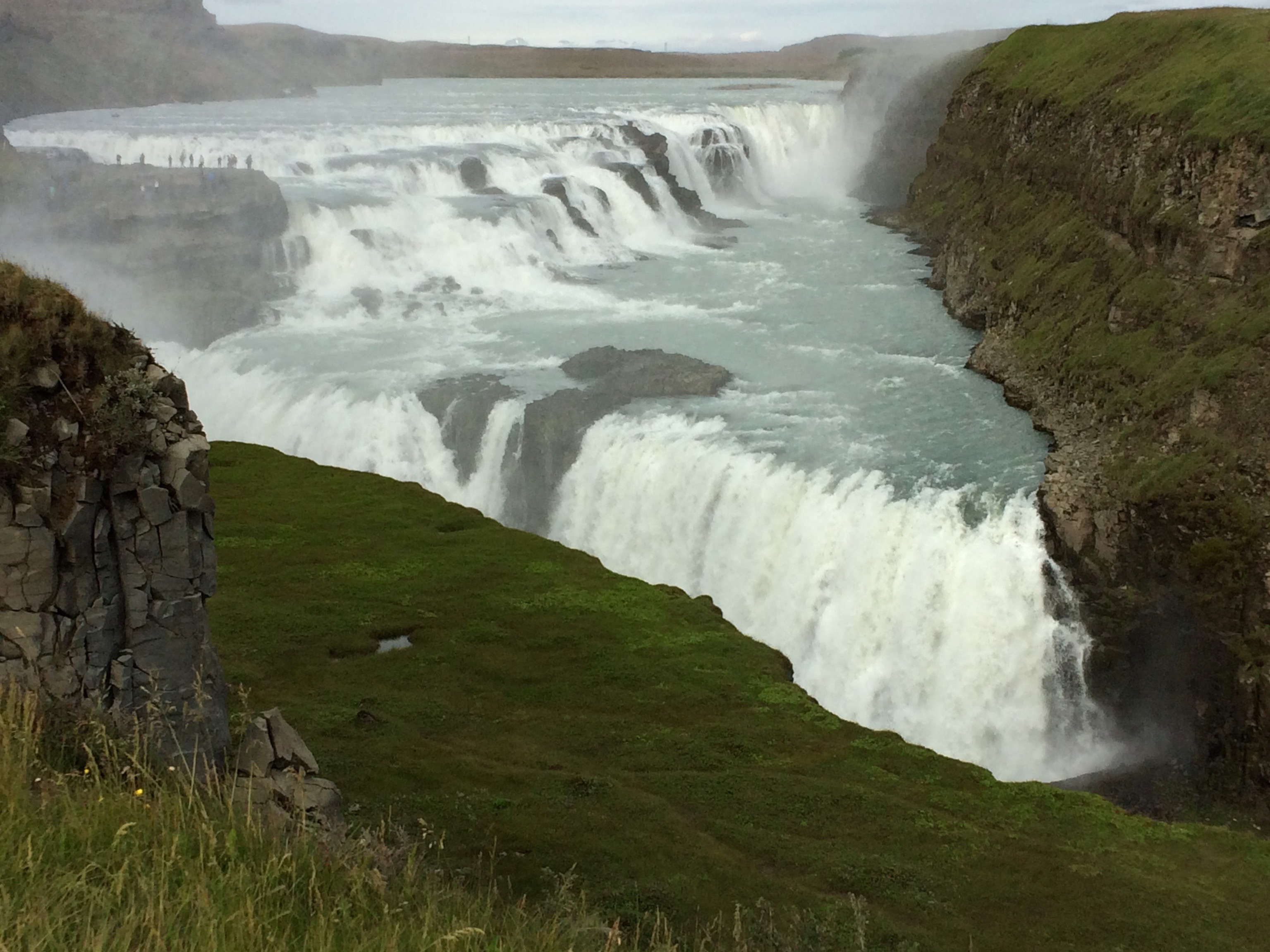 A gastronomic aside: Even though the cafe at Gulfoss looks clean and modern and the prices were reasonable, due to a sudden quirk of fate we didn’t eat there. I found out later that it has some of the best fish stew in the world. And I missed it! Grrr! 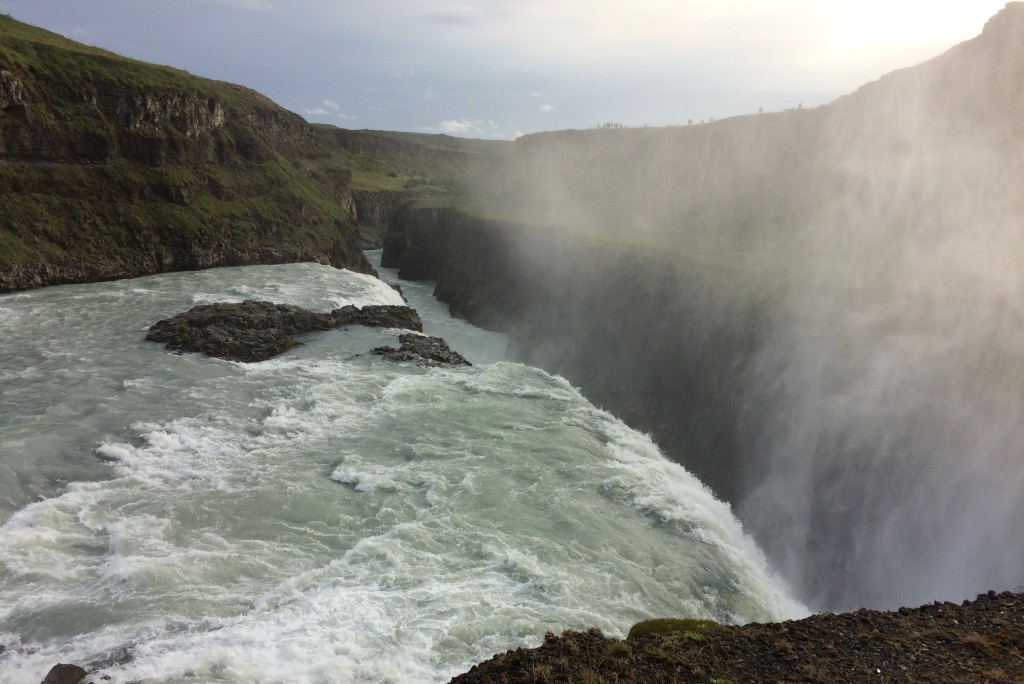 Gluggafoss is not so huge and powerful as Gulfoss, but very lovely. We visited the falls near Hvolsvollur in the evening, hoping the light would remain. Its history is also intriguing, so I’ve included it here. Incidentally, another small and lovely waterfall to the left of Gluggafoss a few hundred yards would receive notice in any other country but Iceland. 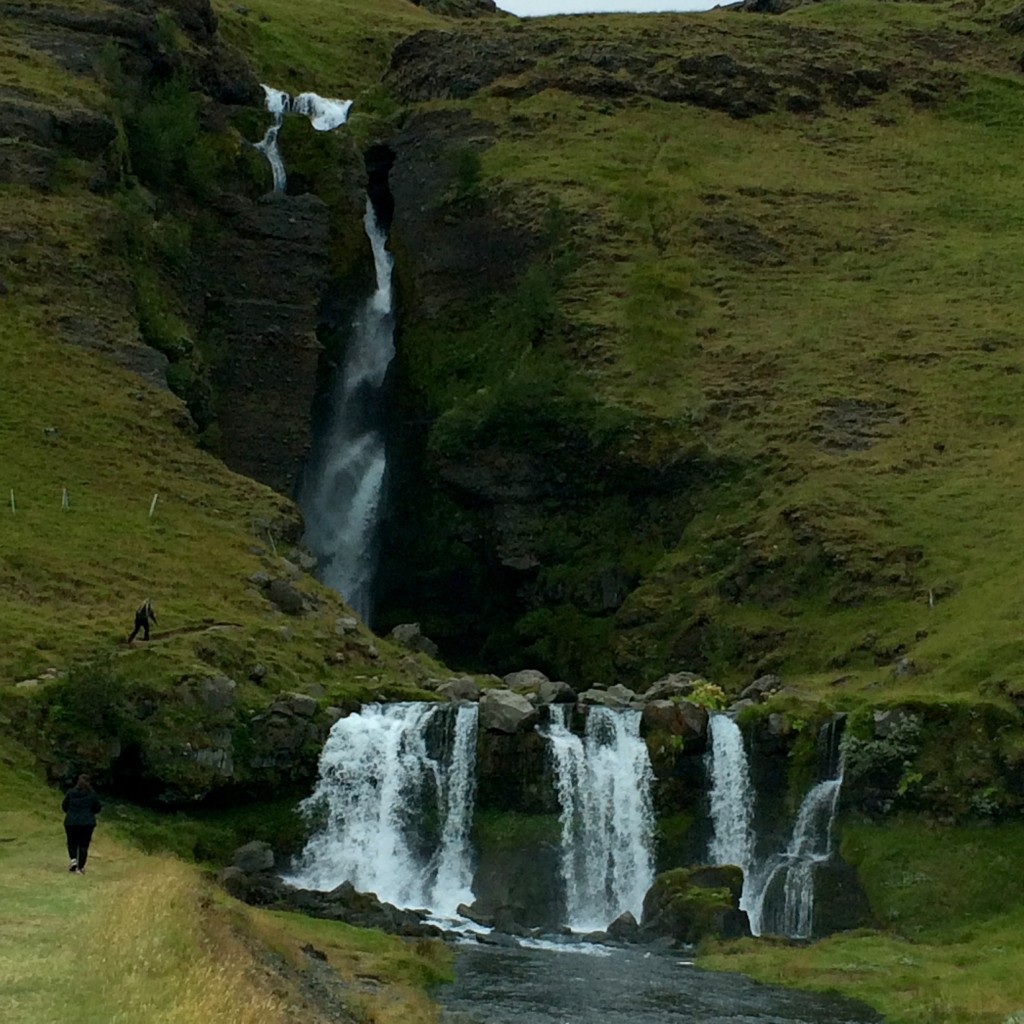 The signage throughout Iceland is particularly helpful. Besides English, there’s usually a translation into French, German, Norwegian, and sometimes other languages so that tourists will understand a little more of what they are seeing. 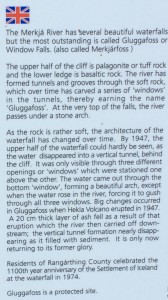 Even though waterfalls in the Lake Laugarvatn and Hvolsvollur area are a frequent occurrence, we still stopped to marvel at them all. I couldn’t drive by Seljalandfoss and Gljufurarbui without paying my respects to such loveliness. Every waterfall is unique. Each has a different shape, a particular sound, a distinct ambience. 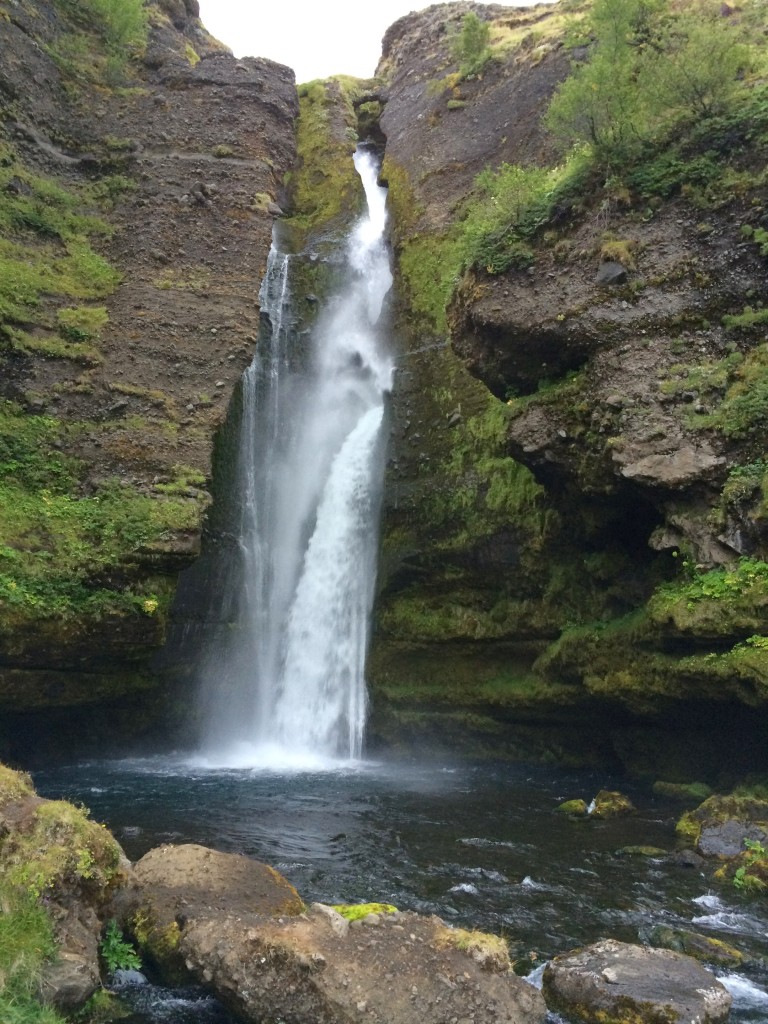 I remember finding a waterfall years ago in a red rock canyon of the Southwest US after I’d been hiking for hours in air so hot and dry that my skin felt tight and parched, at least two sizes tighter than my body. That waterfall called to me to strip and stand under the pounding cold. So what else could I do? But Iceland’s waterfalls do not do this to me. (I admit part of the deterrent might be the thought of a senior in skivvies!) But still, I have this urge to be part of a waterfall, even if it’s only trailing my fingers in the cold water. 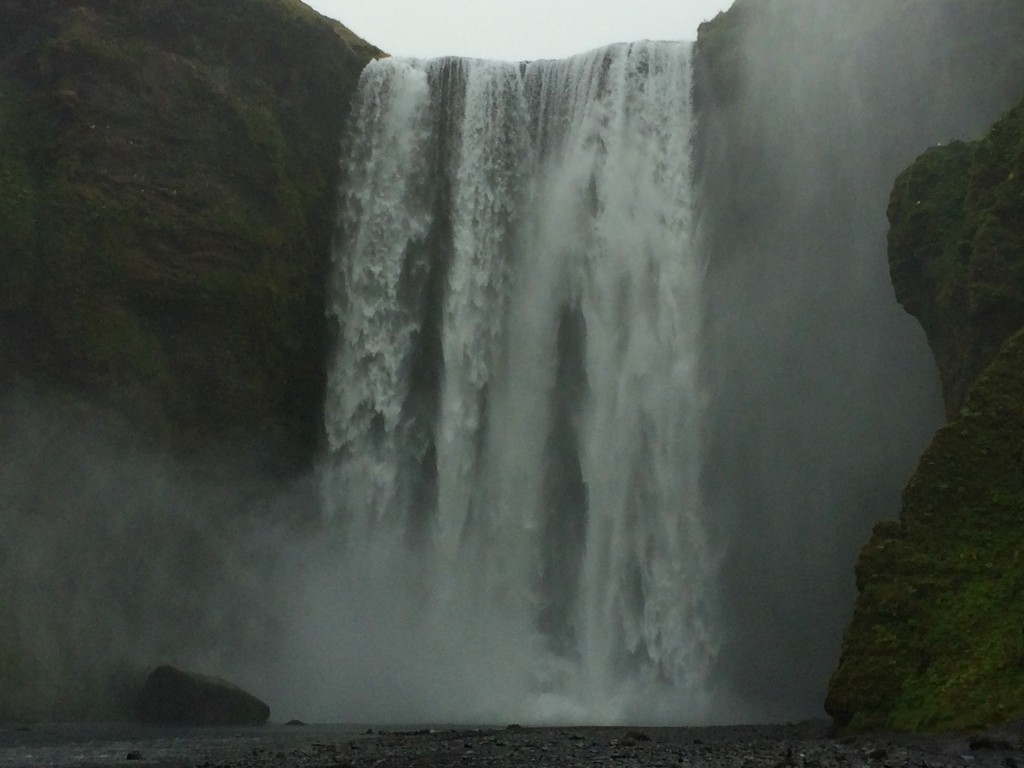 We had some illness in our little trio, so we didn’t extend our walk as far as we had planned. It was raining, which made the path slippery here and there, but my memory of our time there was that of an invigorating landscape following a river that dropped from heights along the way to form beautiful falls, continuing on and on to the sea. 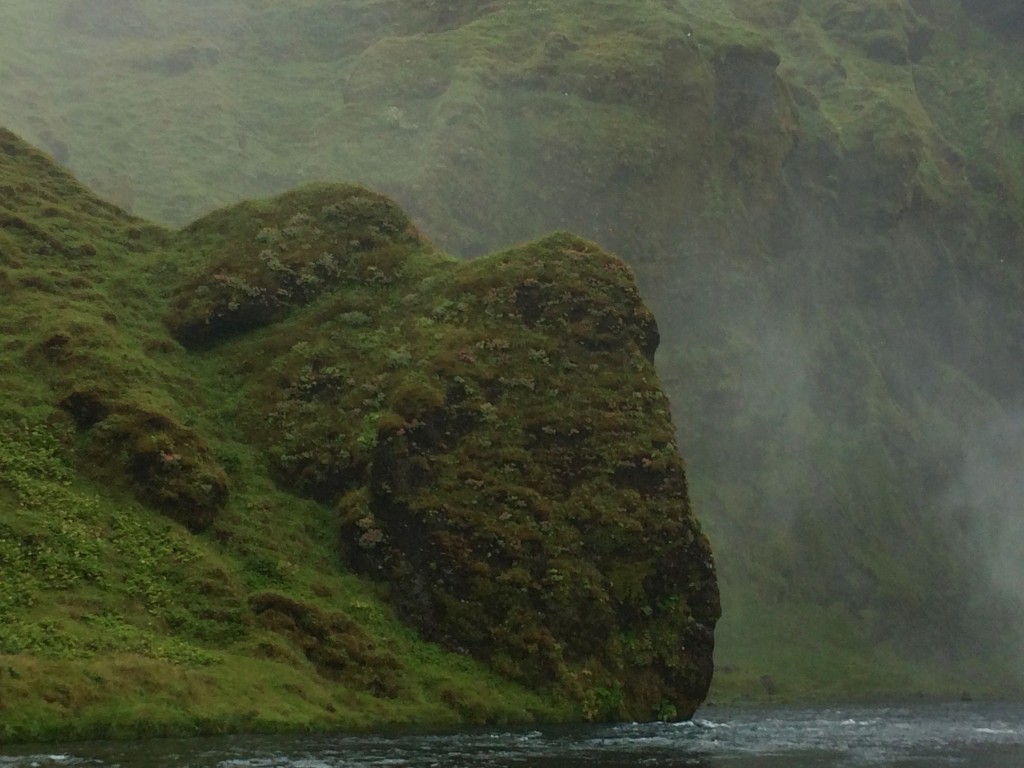 Up the path beside Skogafoss 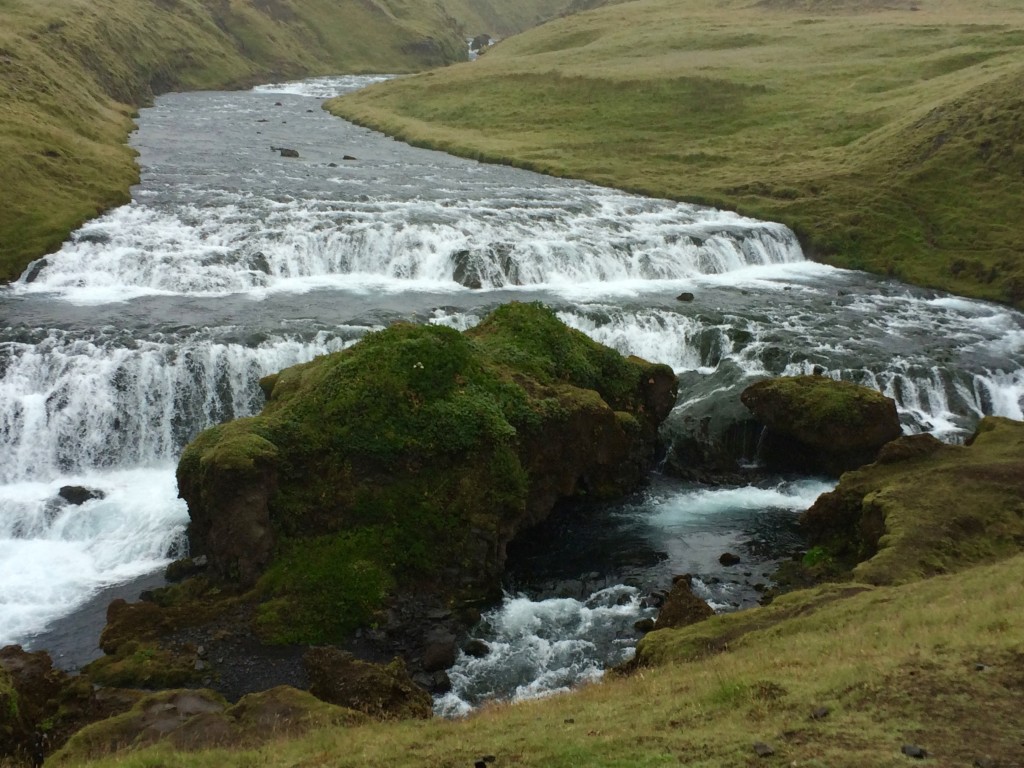 The river above Skogafoss

One cautionary note: Don’t risk missing the sights by not bringing the necessary clothing. You DO need good hiking boots and waterproof outerwear for any season you’re visiting in Iceland. 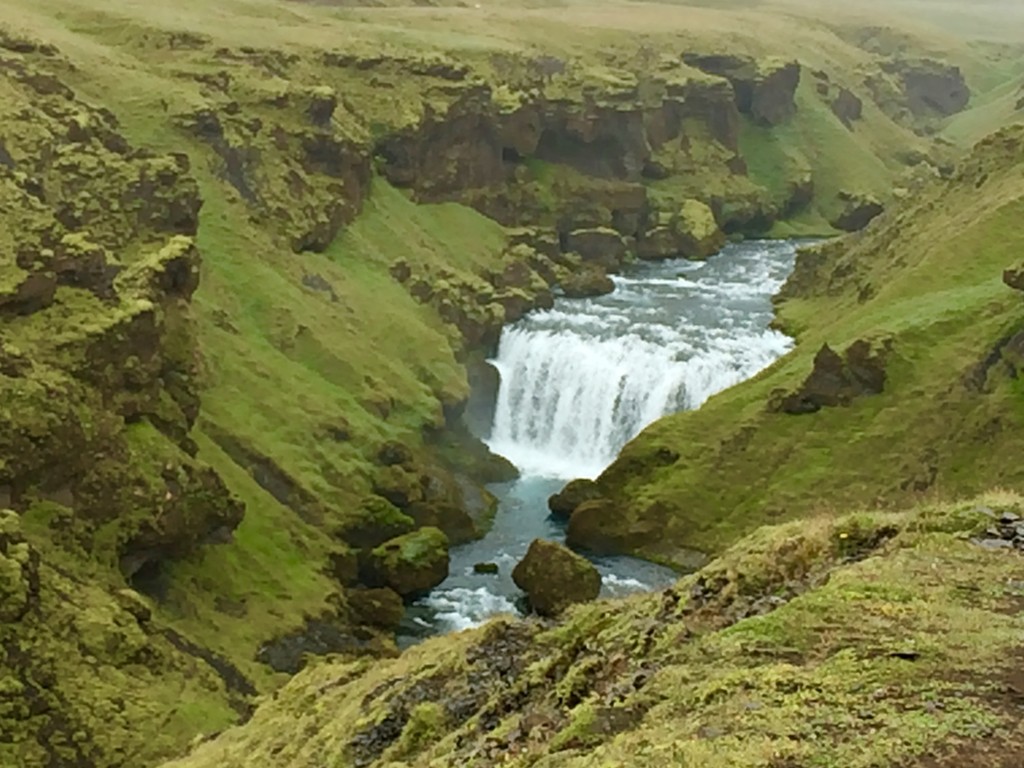 River and falls above Skogafoss