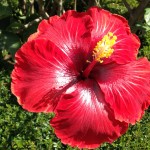 Compared to Mexico City, which is sinking little by little, the complex of temple ruins at Teotihuacan, about thirty miles northeast of Mexico City is built on hard ground and will likely remain solidly reaching toward the heavens for a few more millennia.

The sky was a cloudless cerulean blue the day we visited and I felt how the early sun above the pyramids was already making its best effort. In defense, I stopped at the assortment of booths outside the site to buy a wide-brimmed red straw hat. Since shade is a top priority for a fair-skinned person, I paid the $25 (but not the $40) the shopkeeper claimed the hat was worth. I’d have paid about the same price for a good gardening hat in the US, but my need for a hat was great. The shop keeper’s need for income was probably equal to mine for a hat, so I chalked it up to an informal “tourist tax.”

The Temple of the Moon is an imposing structure, but I could see the Temple of the Sun rising even higher in the distance. I turned my steps toward it down the Avenue of the Dead, followed by hawkers of silver jewelry on either side. Eventually I caved, and purchased silver bracelets, earrings, and pendants for my daughters.

Of course, it’s difficult to tell the quality of what you’re purchasing in a shop, and nearly impossible from a mobile vendor unless you’re an expert—which I’m not. So I may have paid a tourist tax again, but you eventually have to stop worrying about that.

Temple of the Sun at Teotihuacan

I marveled at the grandeur of the Temple of the Sun, staring up at the peak, longing to make the hike to the top. Perhaps it wasn’t so much for the vigorous activity itself, but for what it represented to me. The drive to complete a thing because an inner voice mutters, “Do it now, for you may never pass this way again.” 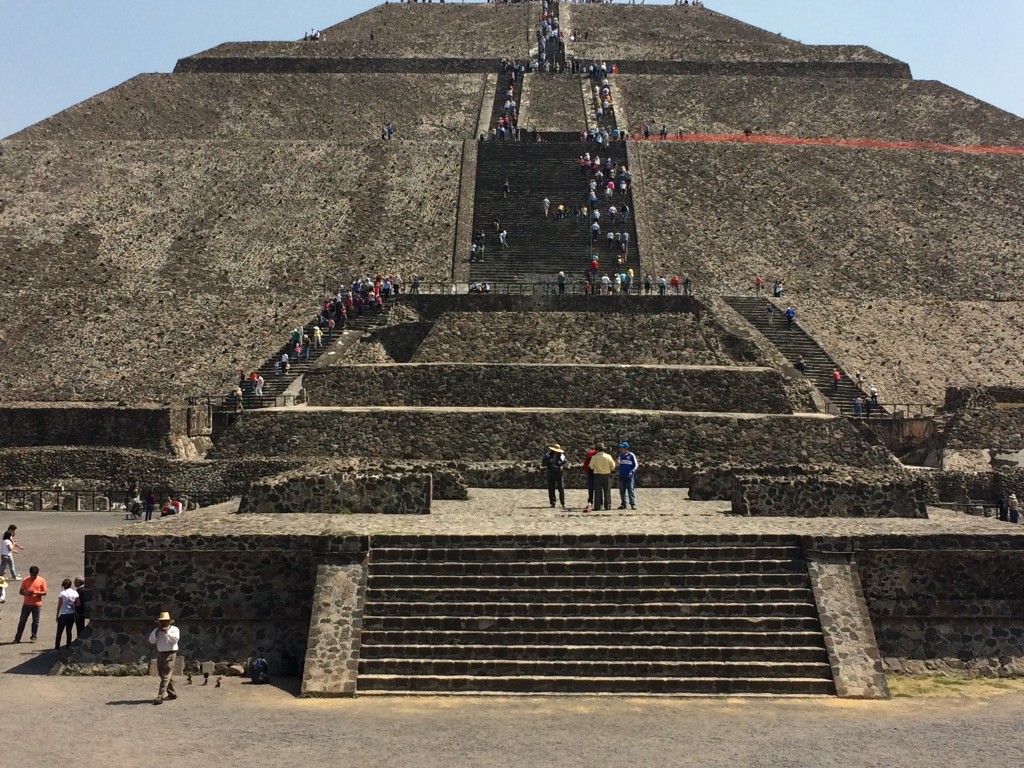 Well, maybe I will, maybe I won’t. But I didn’t have any hiking poles with me and the vision of my body crashing layer by layer down 216 feet of pyramid wasn’t pretty. It would have taken a helicopter to get me down in one piece.

Teotihuacan had been abandoned for several hundred years by the time of the Aztec civilization, and I wish we knew more of the who, how, and what of the complex. Archaeologists can make educated guesses, but even they—with their expertise and trained eyes—are constrained by the limits of their culture and their generation as to what they can see and imagine. 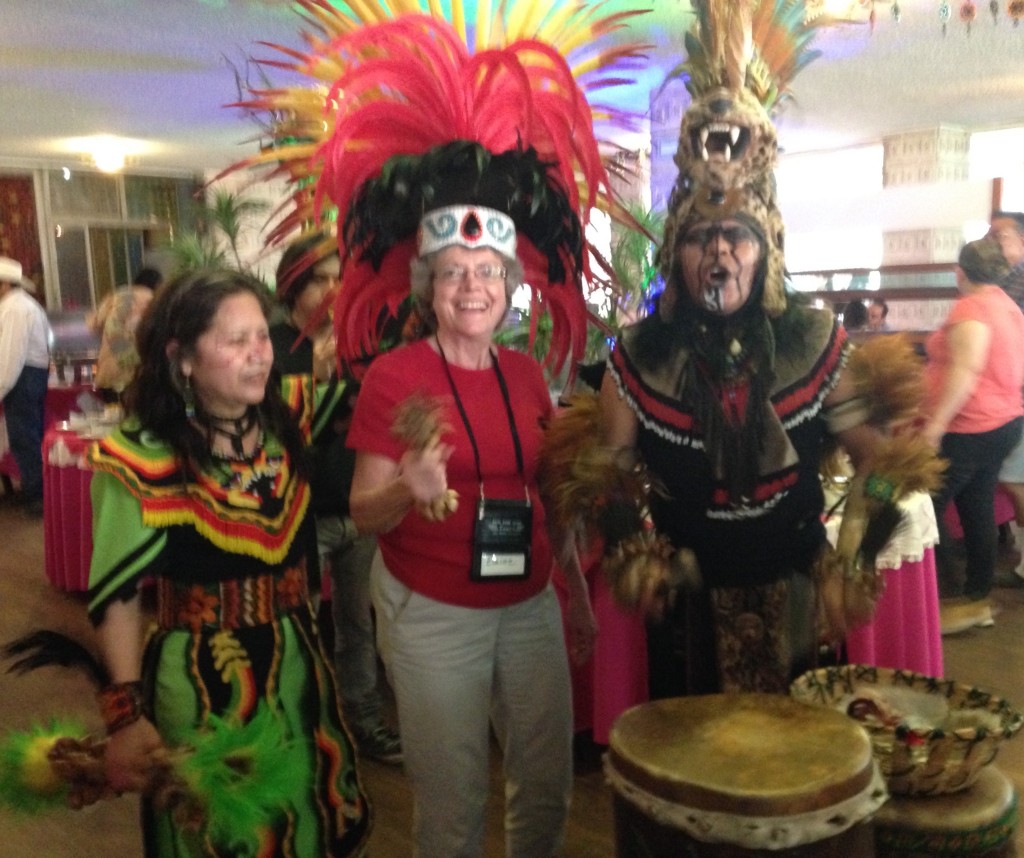 On the road between Mexico City and Teotihuacan we stopped for lunch at a restaurant where a representative from an indigenous tribal group wearing brilliant bird plumage, a jaguar skin cloak, painted skin, and a loincloth looked us over—a disconcertingly ferocious-looking man.

After the mariachi band finished playing, the man and his costumed wife danced and sang for us as they played the drum and shook the gourds while their son played a wooden flute. Here’s a photo of a friend who accepted the man’s invitation to dance–she loved the whole experience. And so did I, from the mariachi band to the indigenous dancers.

But sometimes I wonder how the native performers experience tourists. Do they hate trivializing their ancient culture and religion for money? Are they glad they can make a living by keeping alive their traditions? Do they resent our affluence and girth? Is there any lasting improvement in their life-style from tourist dollars? 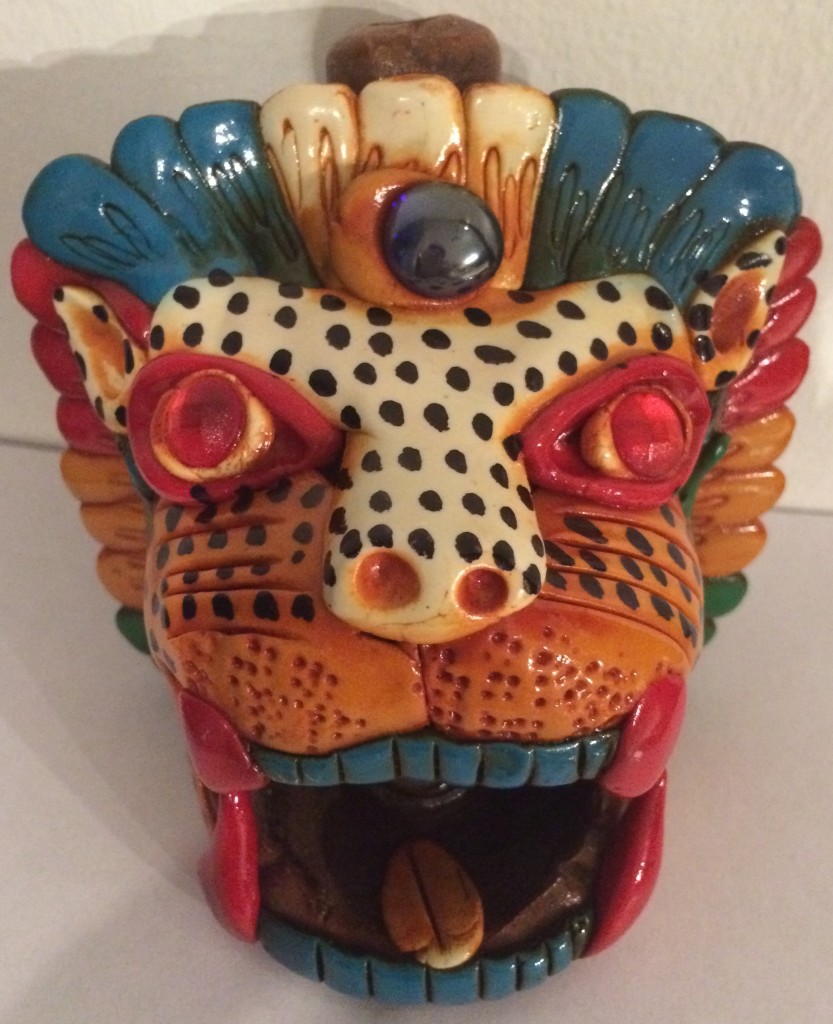 Once we arrived at the temples of Teotihuacan, the sound of roaring jaguars unnerved me just a little. Upon investigation, we discovered that the ferocious sound came from palm-sized fired-clay jaguar heads, brightly painted and with jewel eyes. When the vendors blew on the stem (at the back), it emitted a definite feline snarl. Excellent addition to my collection of folk-instruments.