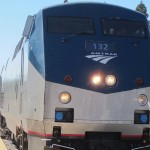 With so many travel choices available, what are the pros and cons of the California Zephyr? My friends and family, some of whom think of train travel as being very nineteenth century, keep asking me why I buy tickets on Amtrak instead of gas for my car to make the same trip.

Here’s what I enjoy about train travel

I appreciate the quiet of the train, and especially the option to stroll about and stretch my legs. If I’m traveling alone and feel the urge for a social moment on a train, I don’t have to rely on the happenstance of a congenial seat-mate. I can generally meet compatible travelers in the dome car or dining car.

I frequently ask them why they chose the train when air travel is faster and cheaper. Without exception, they say it is the experience. They like the transition from one locale to another in which they can see the American countryside unfold, mile by mile. They are “trainees,” I suppose you’d say. When I began traveling on the California Zephyr three years ago, I thought I’d become one of them. A train aficionado.

Over dinner we’d swap stories of the trains we’d ridden in various parts of the country and in various countries around the world. It was fun, genuinely entertaining. I can’t say the food was great, but it wasn’t bad, either. And the company was often outstanding. I found it truly exhilarating to meet people who loved the slower idiosyncratic routes of a train.

Sometimes I spend my time working off-line in the dome car. Depending on the tastes of my traveling companion for the day, we sort of hover between the tables and the lounge chairs. This young man, for example, lives and breathes design and gaming (and sometimes I know what he’s talking about). 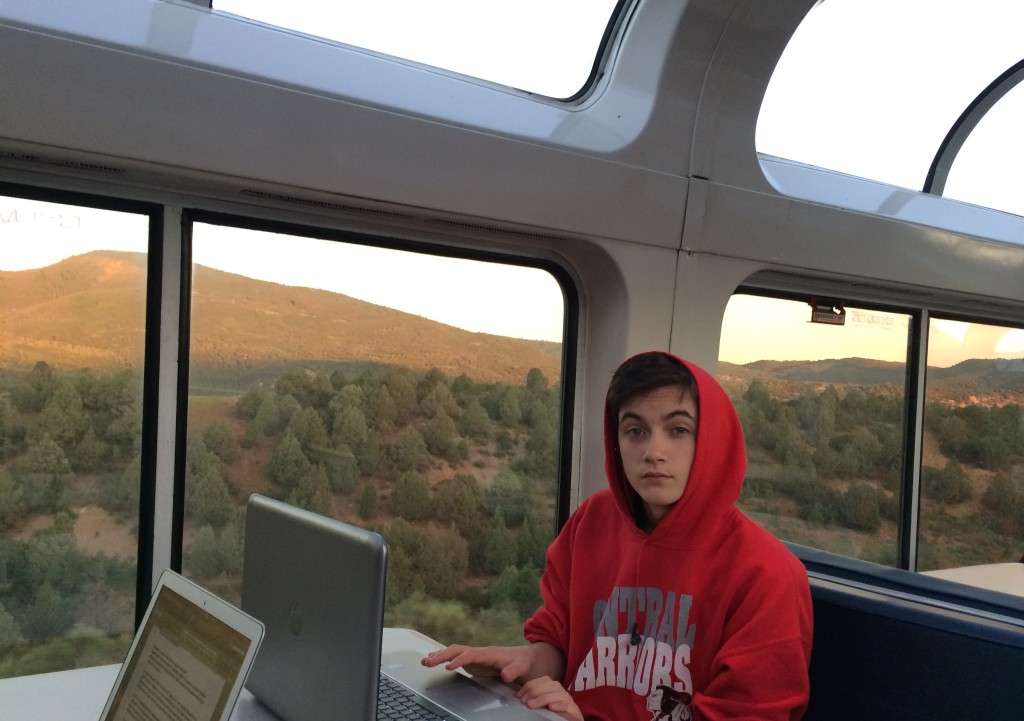 Working off-line in the Dome Car

About once a month I travel solo on a small chunk of the California Zephyr route. Airfare is not a convenient option (given the airports involved) in terms of either time or money.  The train fare is about the same price as it costs for gas if one person is traveling by car, so train is a viable option for me. I can drive a car between the towns I frequent in about 4 ½ hours. Even though it takes the train about 5 ½ hours to cover the distance, I enjoy the time to read or nap.

For a long haul, the train takes more time and more money, so why choose it over airline travel? After all, on a train there’s no Wi-Fi service, and Cell phone usage can definitely be spotty in the mountains and the more remote areas. But isn’t getting unplugged part of the adventure?

When flying coach, the seats are narrow and less than comfortable. There are generally no footrests, so sitting becomes painful after the first hour. It’s difficult to get to the aisle if you’re seated at a window, and the airline makes it clear they prefer you to stay in your seat with your seatbelt buckled.

Train seats, on the other hand, are large and comfortable with adjustable leg support similar to seating in Business Class on airplanes. And nobody lifts an eyebrow if you walk from car to car to car for exercise.

Airlines charge extra for any suitcases that don’t fit in the over-head bins, whereas your train ticket includes two amply-sized bags. Similarly, while the airlines serve a beverage and some combination of nuts/crackers/cookies, the train has a very civilized snack car area.

But here’s the problem

Well … actually, let’s make that a plural number of problems. Sometimes the bathrooms are clean. Other times ……..

I noticed a couple of years ago that the California Zephyr had stopped offering their Coach guests pillows and blankets. Most airlines did the same thing at about the same time, so I brought my own neck pillow and remembered to bring an extra sweater or jacket. Problem solved.

Three years ago, I traveled about once a month with rarely a hitch. The past year, the California Zephyr has arrived three hours late, five hours late, nine hours late … even  longer. And sometimes they don’t travel at all on a particular section of the line for days on end.

The first year, I’d get warnings via text as to delayed train status on my I-phone, but not anymore. Now, I have to call the closest station every hour for the ETA.

I understand that wintertime is particularly difficult for trains traveling through the Rocky Mountains. Avalanches and rockslides do happen. So I’m not talking about hazards of terrain. But apparently Amtrak does not own the track. Consequently, they don’t have that much control over the schedule, or even when the trains can run.

And then there’s the problem of maintenance. In the dead of winter last year, the second engine that’s required for hauls over the mountains broke down. As boarded passengers, we waited five or six hours for another engine to arrive. Further delays occurred in the middle of the night because Amtrak had to be sidelined for long periods while waiting for the freighters to go through.

When I left home on the California Zephyr a few days ago (only 3 ½ hours late), I looked around at my fellow passengers. Few families, no businessmen, some retirees. I couldn’t find an aficionado anywhere. My guesstimate is that the volume of passengers is way down, at least for that section of the route.

Three years ago, I thought I was sold on train travel

Three years ago I told all my friends that I loved the freedom of a train. Amtrak was the way to go—they ought to try it. This year, I board the train at whatever time it manages to arrive and hope I get to my destination before my friends and family have given up on me and made other arrangements instead.

I don’t want to give up on the California Zephyr, but these are hard times for would-be aficionados.