The pirate and Taino lore of Los Haitises National Park form a strong draw for visitors. Exploring the unique habitat is another compelling reason to visit, and the rustic eco-lodge Paraiso Cano Hondo for an overnight stay is like none other I’ve visited. We found the freshwater pools nearly irresistible. As seniors who’ve lived a lot, we hadn’t expected to have so much fun splashing around under the waterfalls. 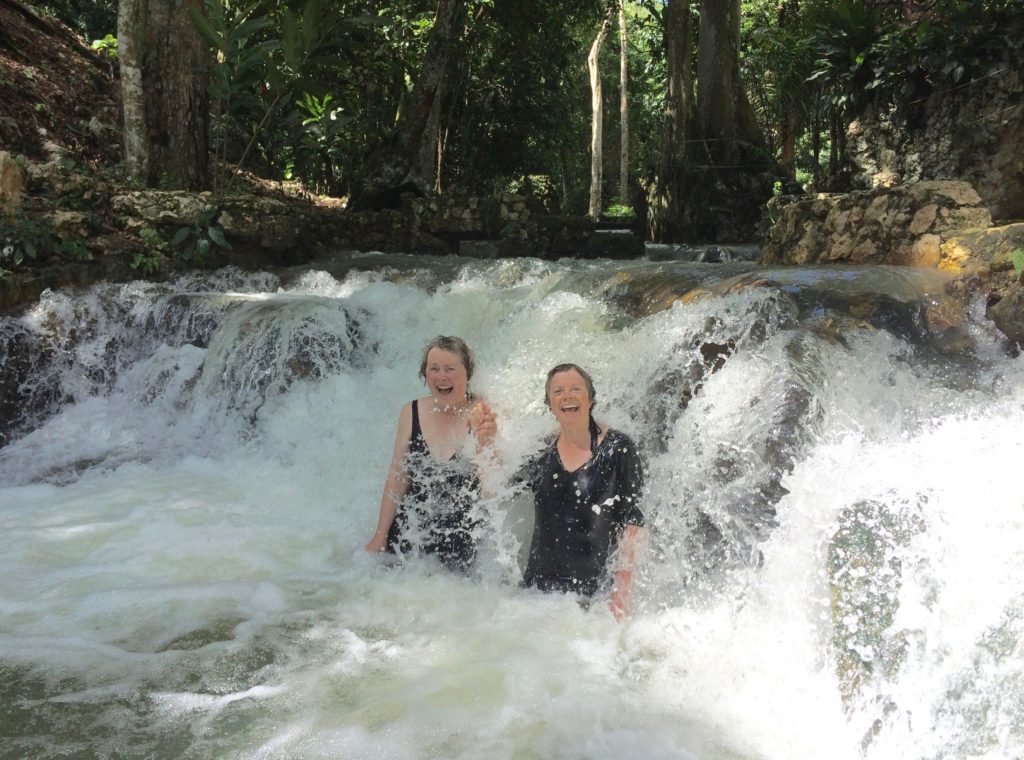 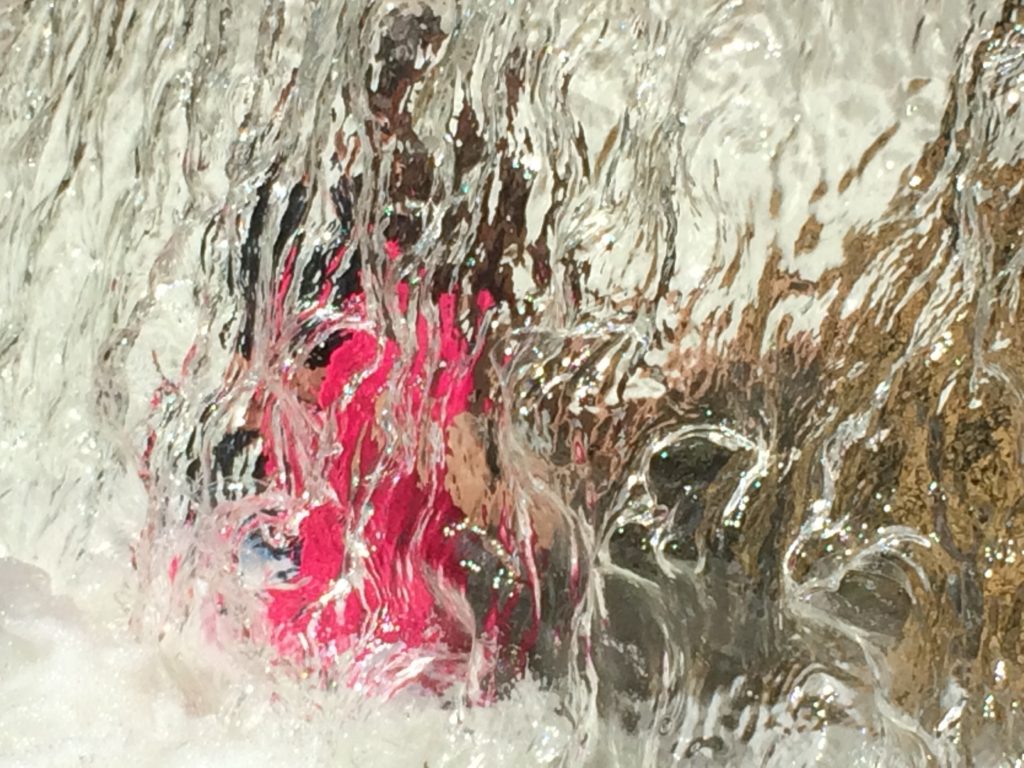 Standing behind the falls 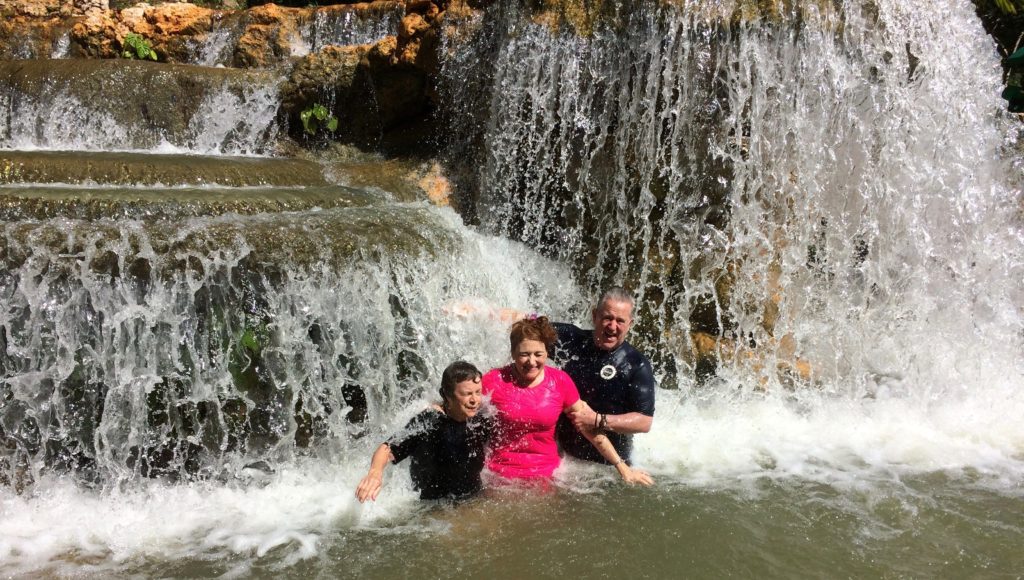 But there you have it! Oldsters squealing under the weight of cold water pummeling our hot backs on a sunny day. With the sound of waterfalls, jungle creatures, and the rain on metal roofs lulling us to sleep every night, who needs a sleeping pill? Truly, our visit to Los Haitises proved unique in almost every way. 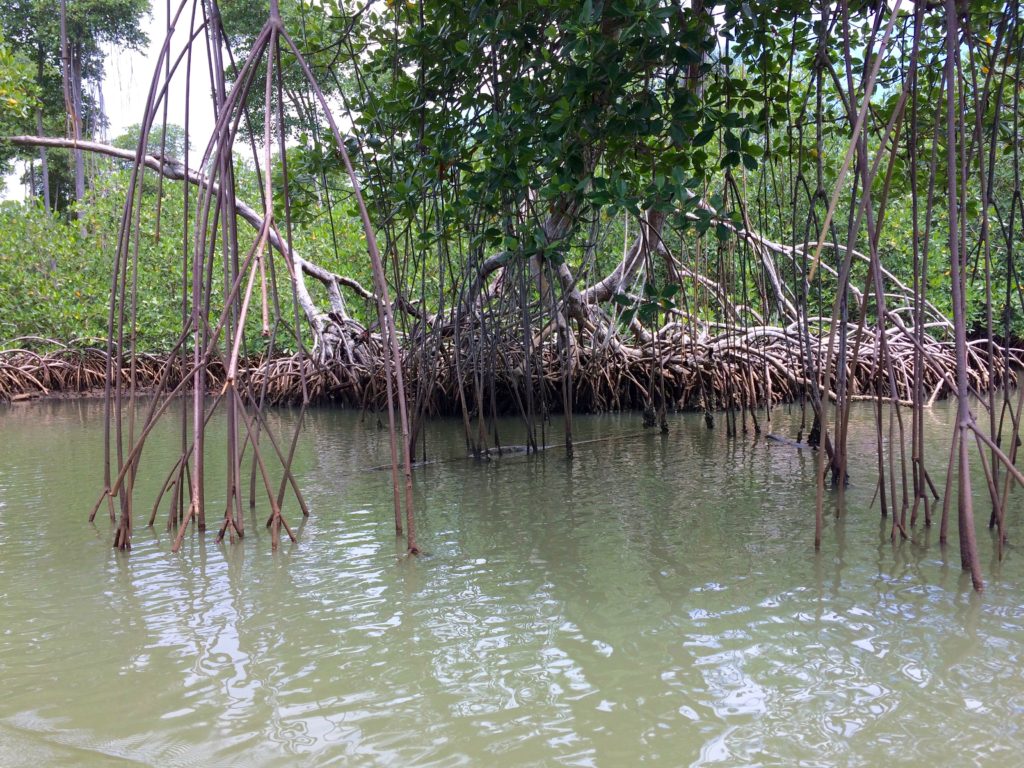 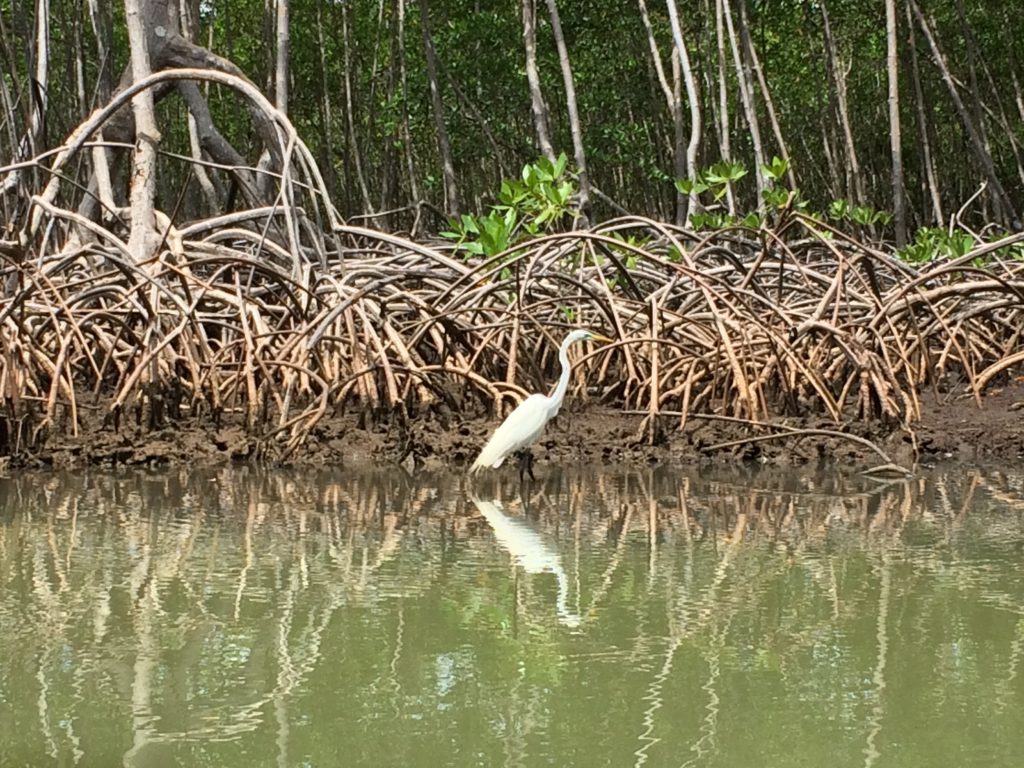 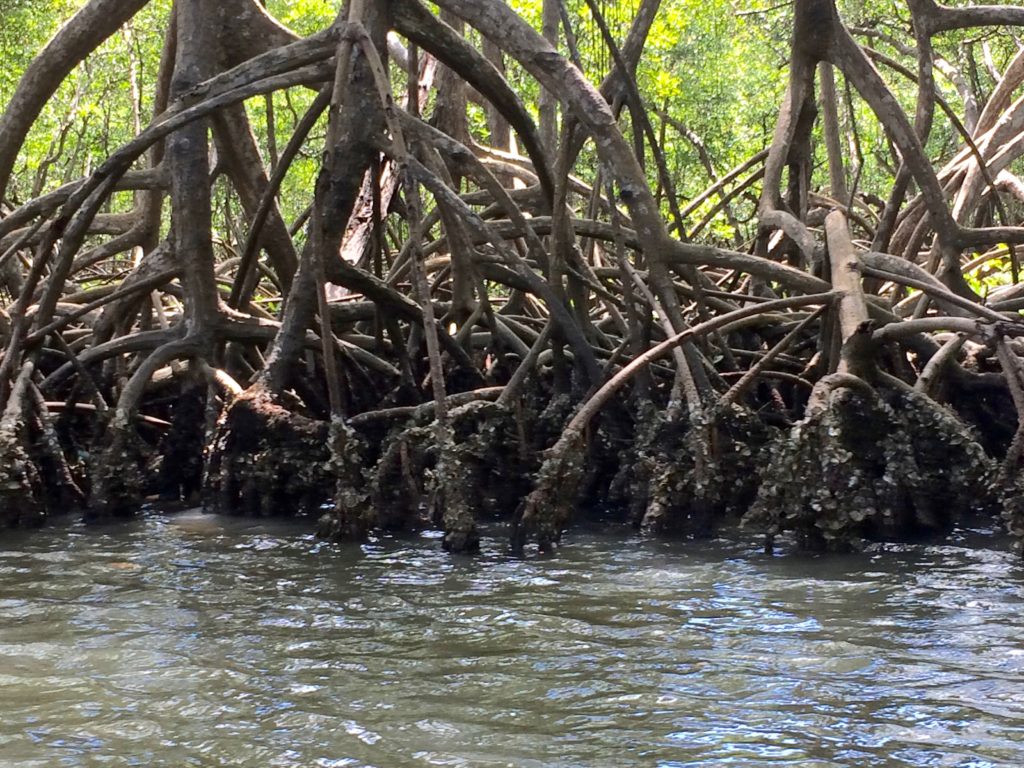 We arranged through the lodge to take a boat trip through the mangrove forest along the Yuna River into San Lorenzo Bay which opens into Samana Bay. If you’re already visiting the Samana Peninsula, you can hire a boat from the main wharf in Samana that will take you across Samana Bay. Some offer a guided tour plus lunch. But these larger boats can’t navigate the Yuna River where the mangroves are thick and wild with barnacle-encrusted roots at the water line. The Paraiso Cano Hondo Eco-lodge offers boat trips with a local guide at 10 AM and 2 PM daily. 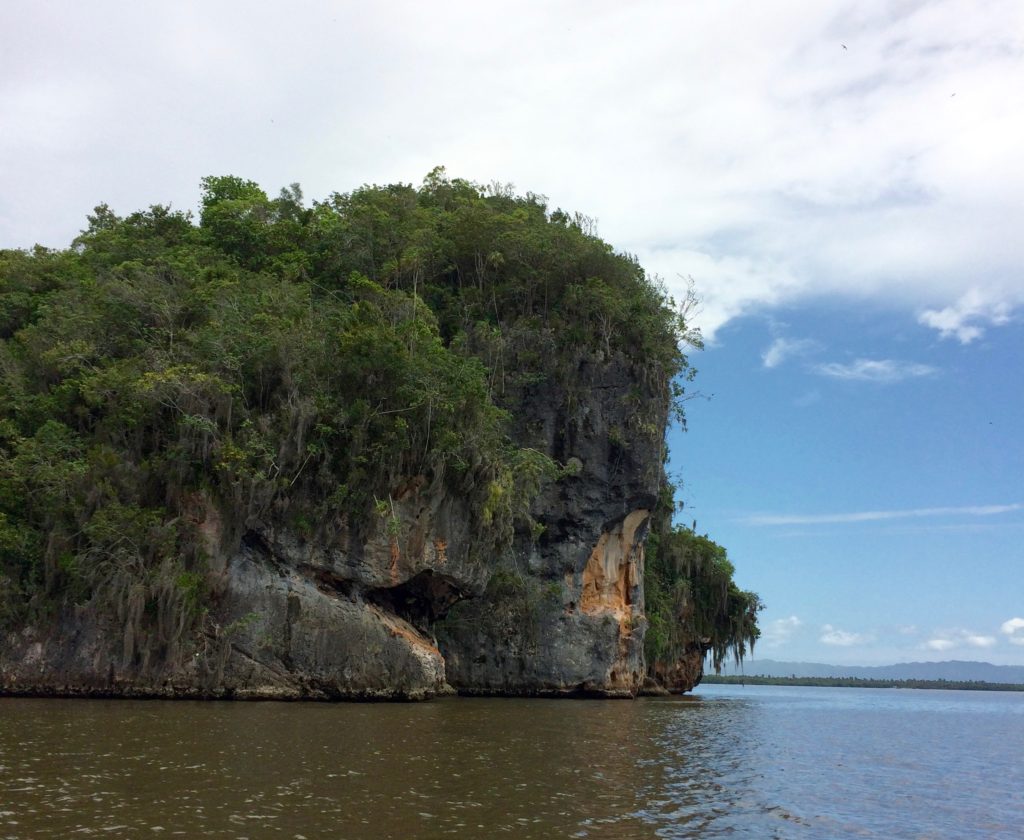 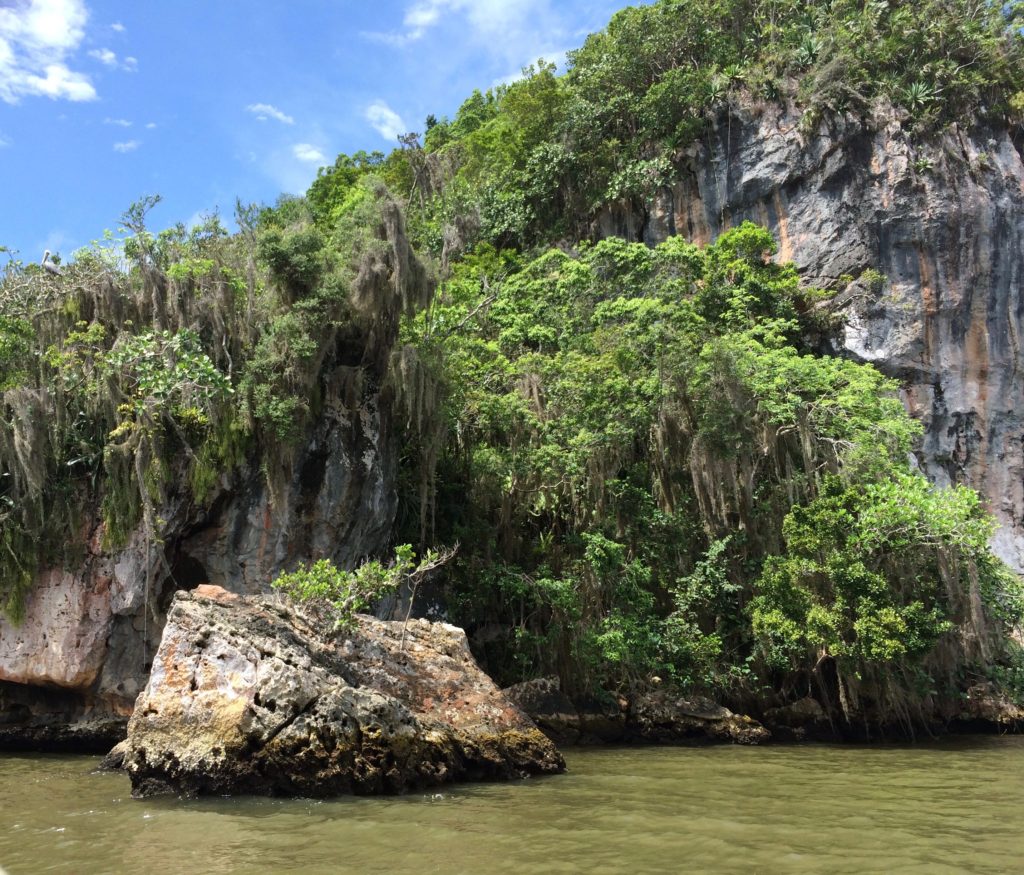 Camouflage for a pirate ship? 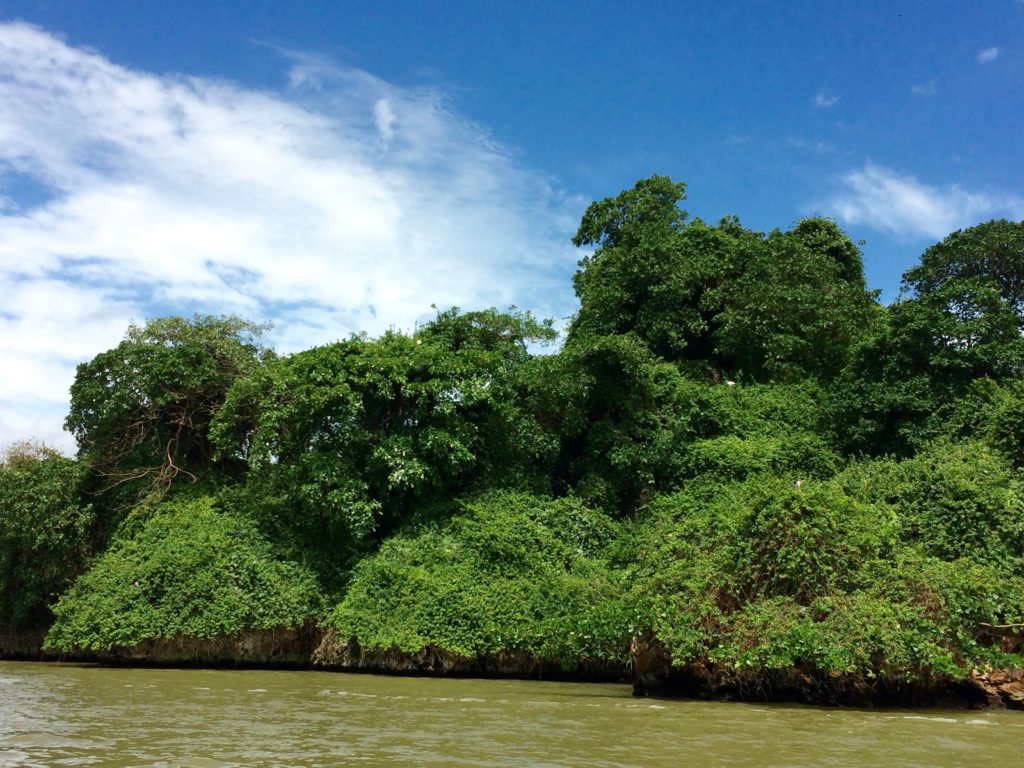 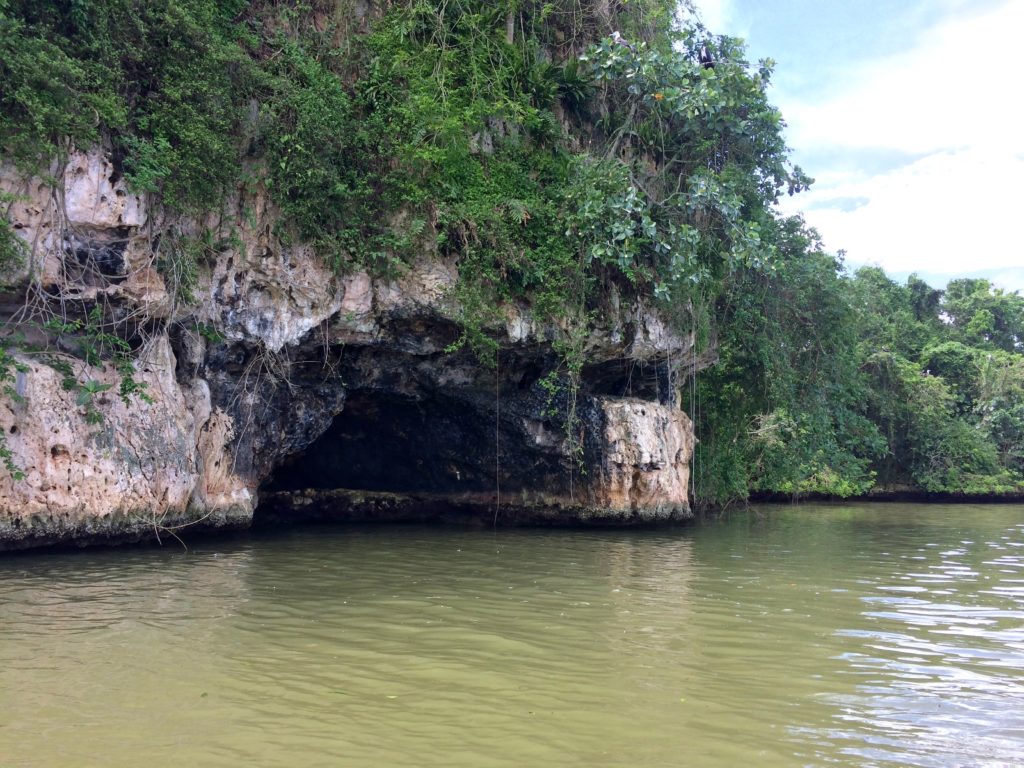 Out in San Lorenzo Bay, we floated past forested islets, where birds line the horizontal boughs of Cupey trees and others large enough to hide a pirate ship. We passed through caves with petroglyphs and pictographs, only two of which I reproduce here. We could also see areas where the caves had been blackened by fires from pirates who came ashore while their ship was hidden. 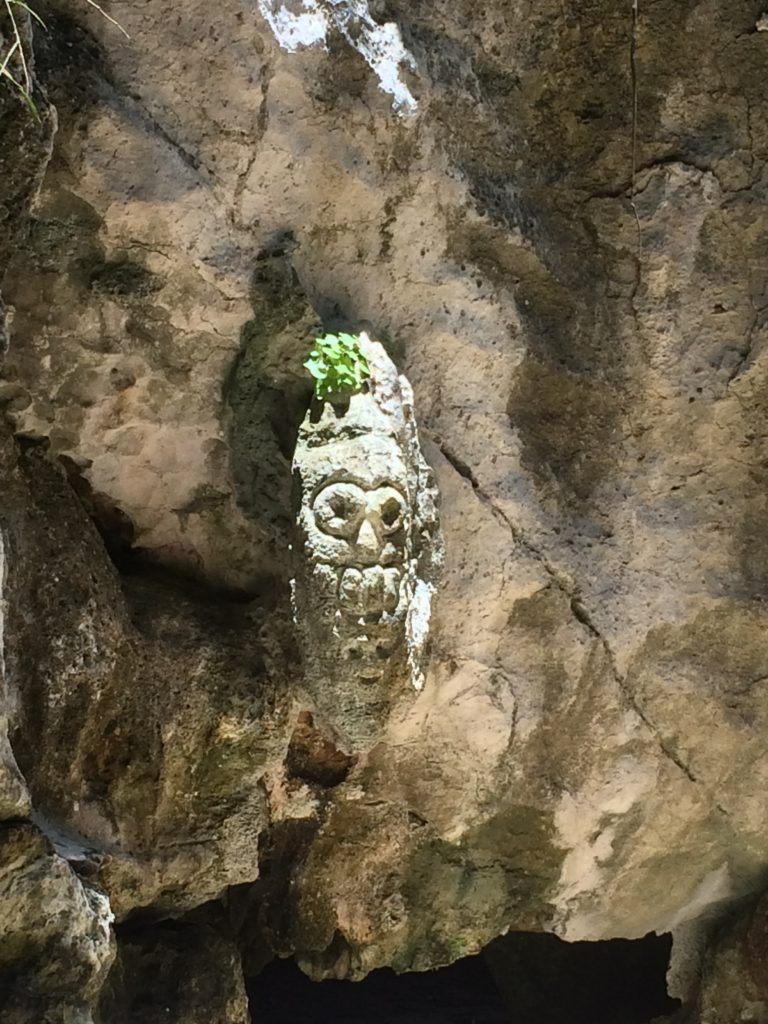 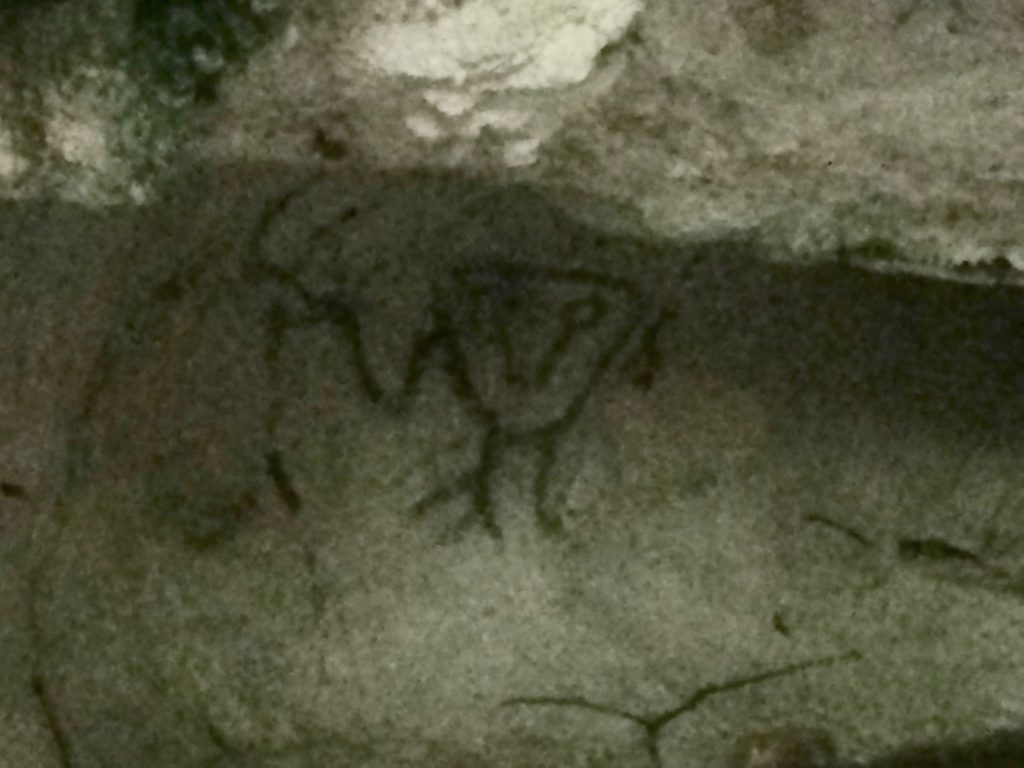 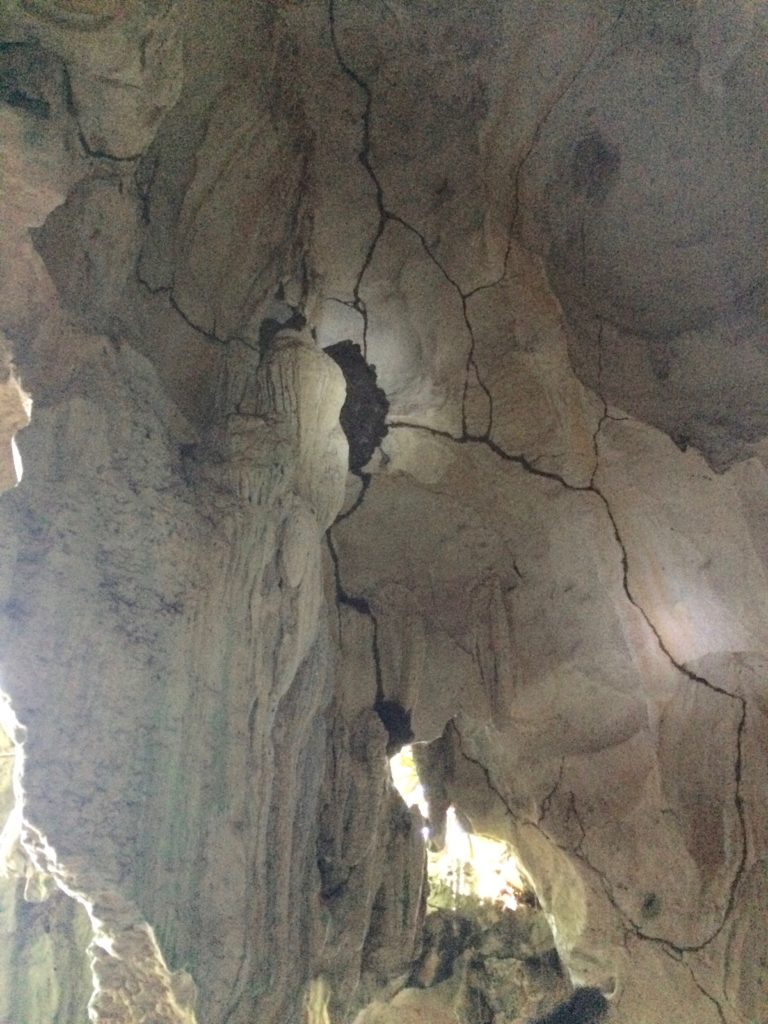 Termites followed the roots into the cave

We had planned on taking the afternoon Nature Hike that we’d read about Online. Our trip coincided with the rainy season (April through June), however, and the lodge advised us that the trail was washed out and impassable. Good excuse to make a return trip, right?

Three lodges located along a hillside 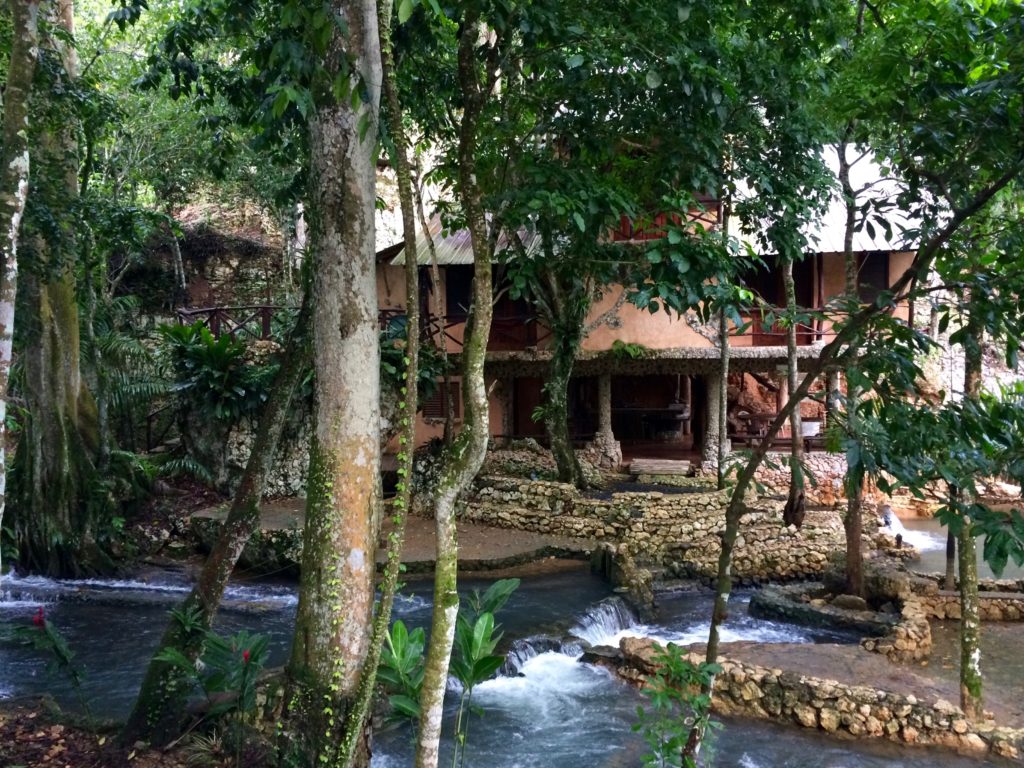 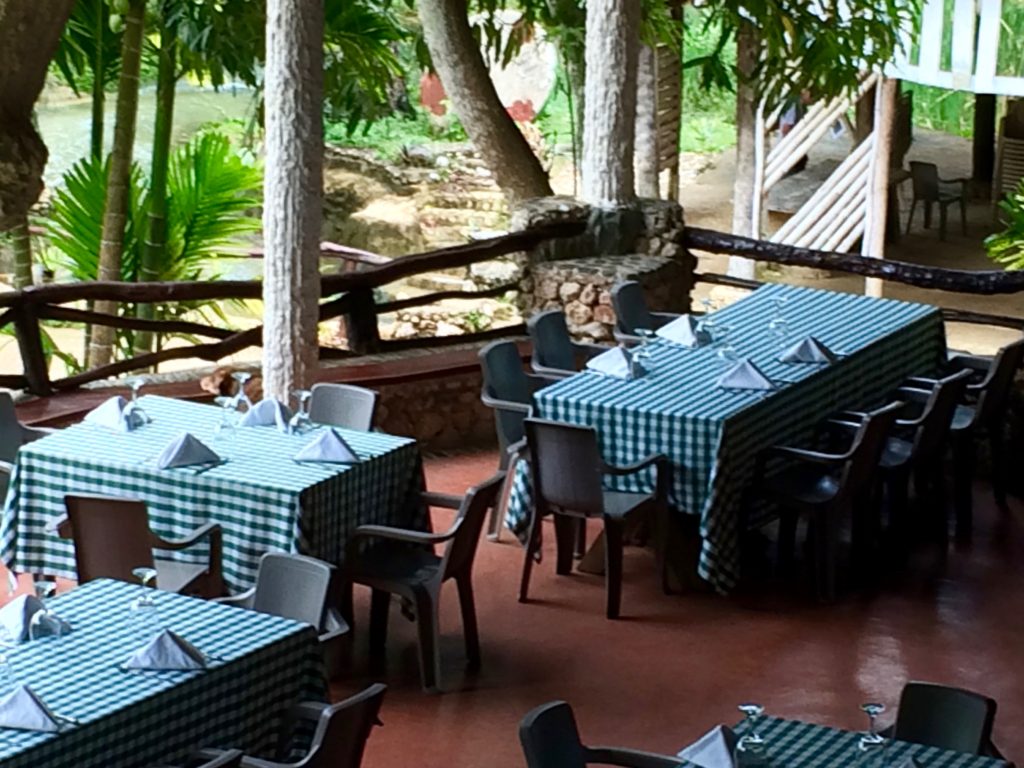 The first one you’ll come to is Paraiso Cano Hondo Eco-lodge, with its truly wonderful series of at least eleven falls and pools. Each one is different in shape and volume of water. The only thing similar was our delight in splashing around in them. 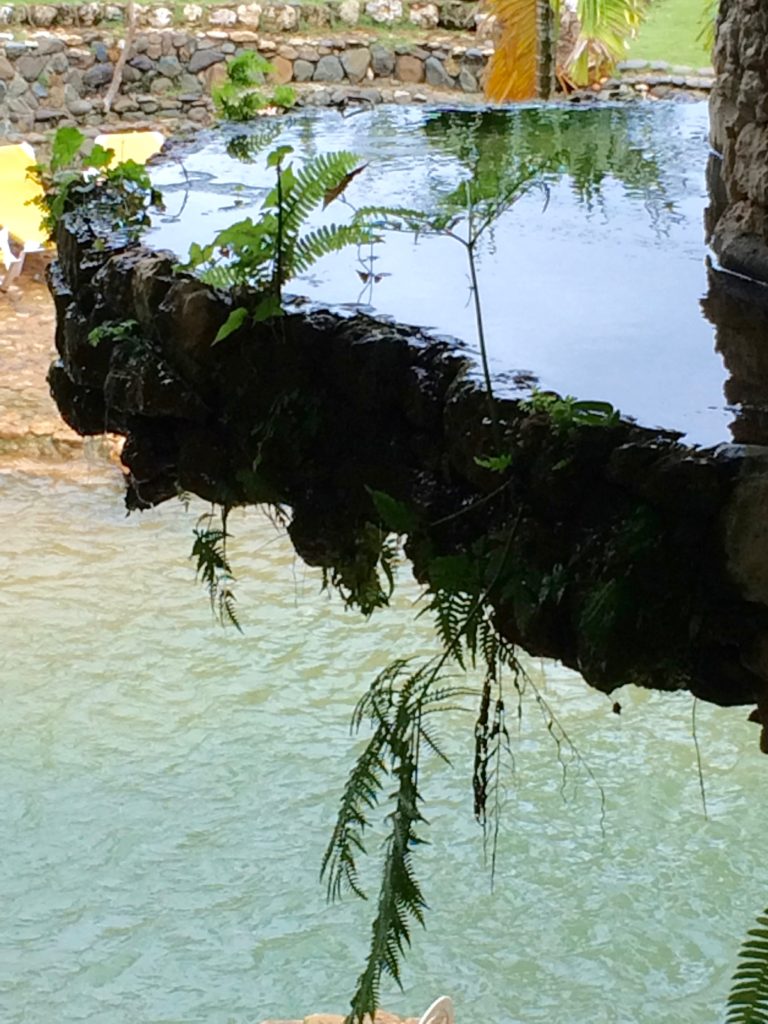 Aerial pond from above 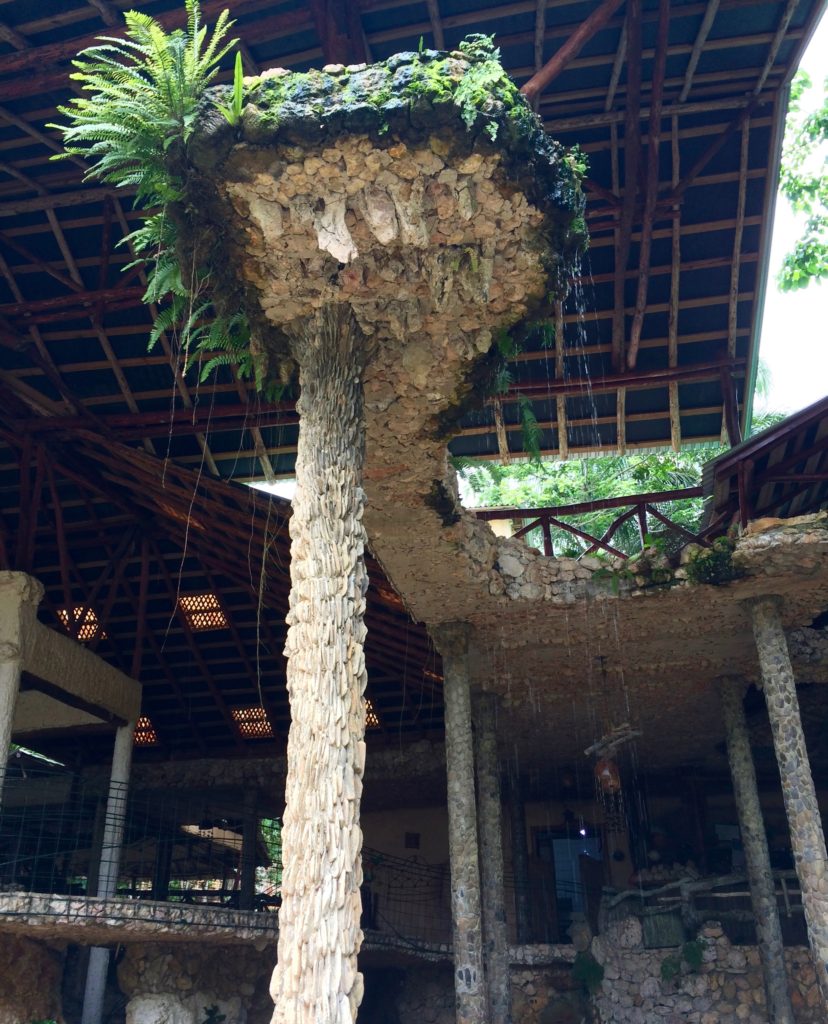 View from below the aerial pond

Throughout the eco-lodge we discovered little hidden delights. Take, for example this little pond on a tall pole that could only be viewed from our room. And then, only if we walked outside onto a short pathway between two sections of roof-tops. Everyone else could see it only from below. There it appeared to be a light cascade of water from a clump of foliage on top of a white pole. 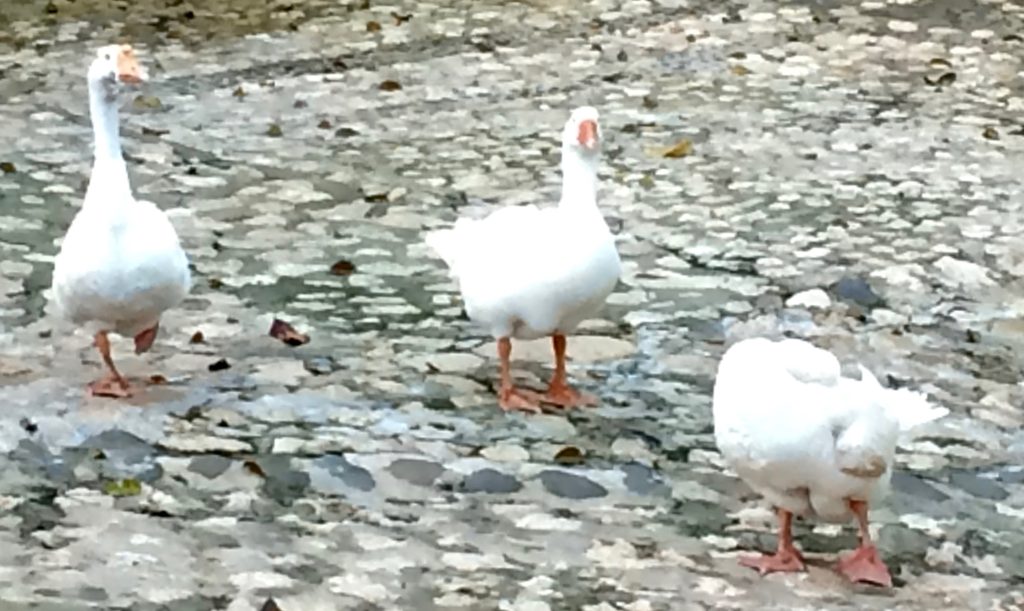 Geese are not your friends

These three geese greeted us on our arrival by striking at our feet. Dissuaded by a few swift swats with the soles of our sandals, they nevertheless stalked our doorstep for three days. They are marvellous lawn-mowing machines, and the tightly trimmed grass showed their vigilance. But never doubt this observation: Geese are not your friends.

As I was rounding the corner of one of the waterfalls, the sight of these white towels drying in the sun startled me. They seemed for a moment like ghostly spectators waiting for my plunge into the next pool. 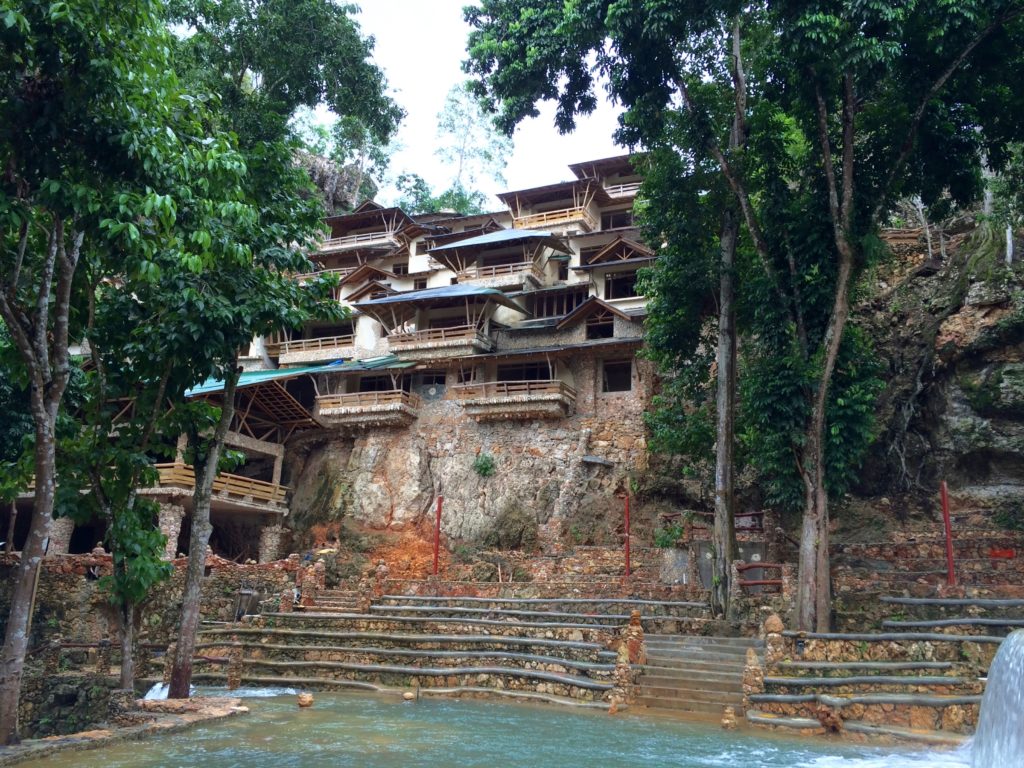 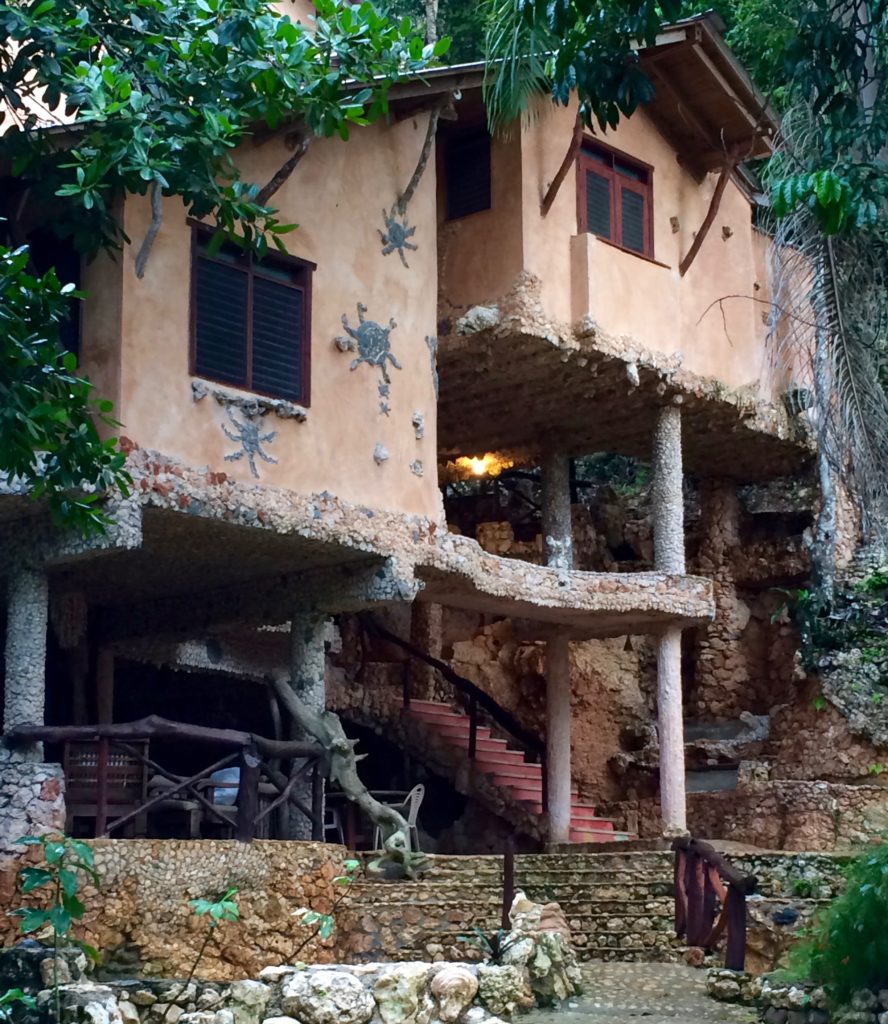 Directly above Paraiso Cano Hondo on the hill behind it you’ll see an amazing structure consisting of rooms and a restaurant with small dining areas. It’s all a construction site now, but the siting of the complex is extraordinary. Sort of on the idea of the Anasazi Cliff-dwellers in Mesa Verde National Park, Colorado, USA. [But with the promise of all the creature comforts, of course.] 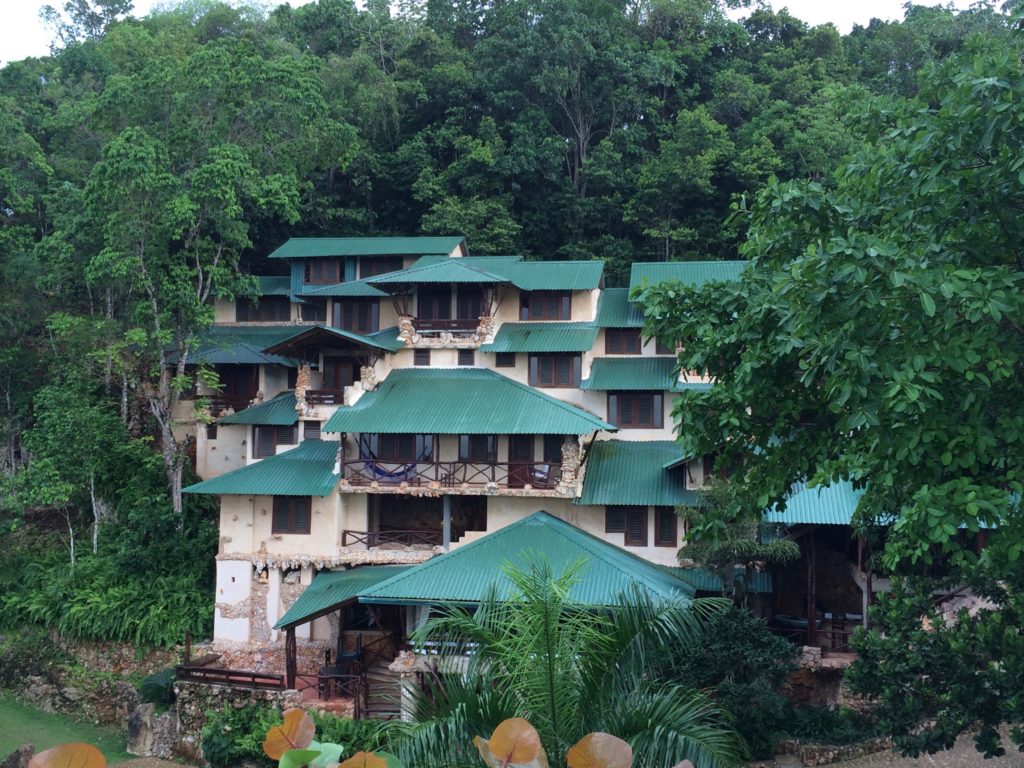 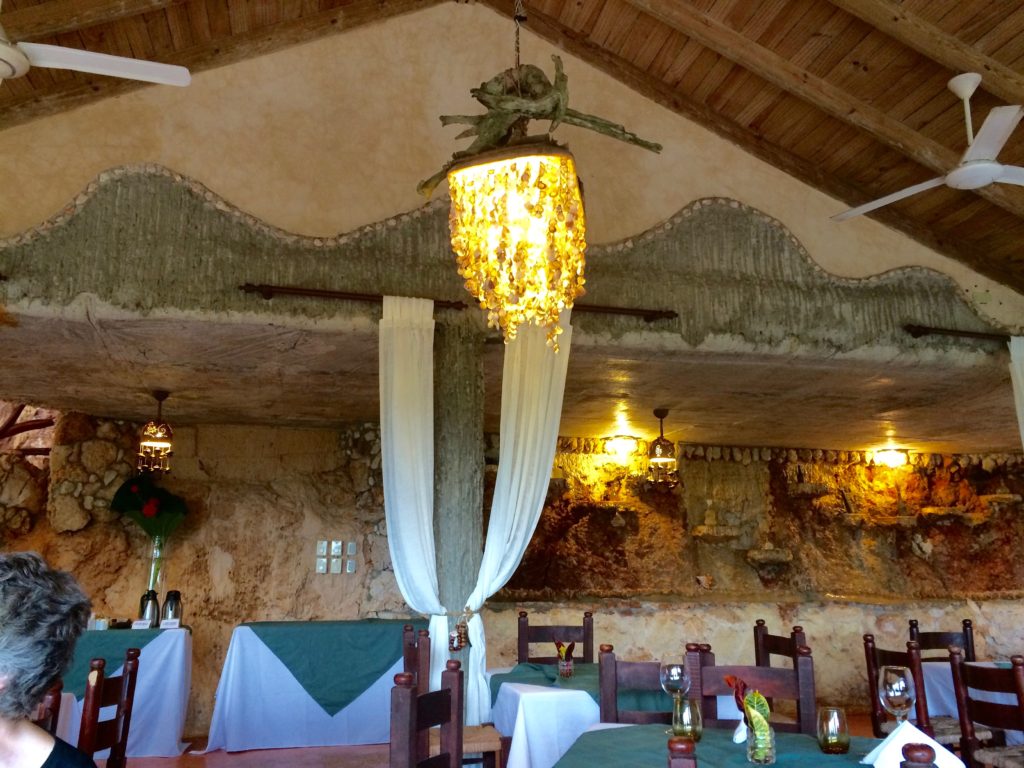 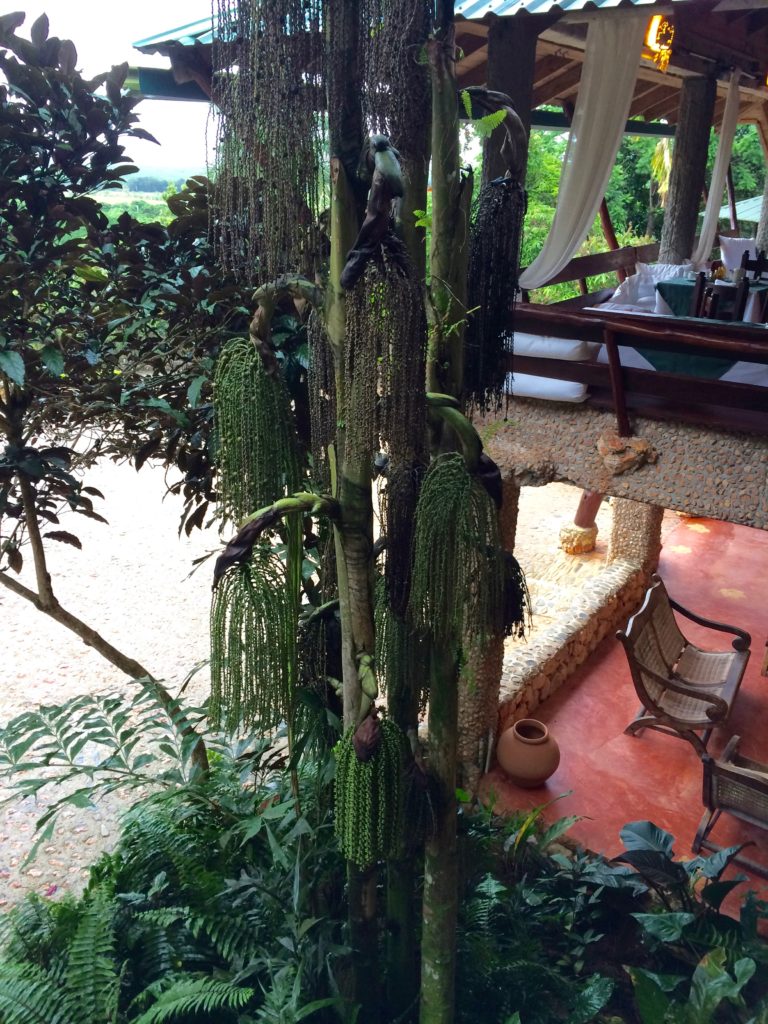 Tree beside dining room and lounge below

Clinging to the hillside a little past Paraiso Cano Hondo, you’ll find a third hotel and restaurant complex, Altos de Cano Hondo. It’s in pristine condition, with beautiful spaces and views of San Lorenzo Bay as well as the larger Samana Bay. We were so taken with it that we booked their largest room with two balconies and four queen-size beds for an upcoming family vacation.

The overland approach to Los Haitises

We chose an overland approach from the south. Friends had warned us that Hwy #3 is a terrible road that eats car tires. (Road conditions can change, of course, but check before you drive it. This writing is May 2017.) Consequently, we took a loop to the east. Here is our route from Santo Domingo: #4 E to San Pedro; #4 N to Hato Mayor and on to El Seibo; #107 N to Miches; #104 W to Sabana de la Mar & into Los Haitises National Park. We stopped briefly a couple of times along the way, so our trip took about three hours to travel the 170 km.

At Sabana de la Mar we were hailed by a moto-concho who assumed he could escort us into the park (for a fee, of course). When we realized his intent, we stopped driving until he came back to check on us. We firmly told him no thanks. The signage into the park proved entirely adequate. There is no reason to use the guidance he offered unless you want to help the local economy in a fairly useless way. I’d rather give a generous tip to personnel who offer a genuine service that enhances our experience of the park in some way.

While the ambience of the lodge is delightful, the management of Paraiso Cano Hondo caused us some discomfort on several accounts: