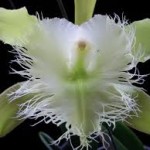 The Parque-Museo de La Venta, an outdoor museum near Villahermosa, was only a short flight from Mexico City. I had eagerly anticipated the day’s destination, but our built-like-a-brick-with-ears tour guide (as he ruefully describes himself) had not factored in the narrowness of the winding path compared to the number of people in the group. 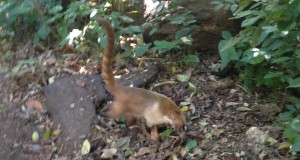 The guide would be up front pointing out a termite mound near an ancient Olmec head, and we at the back would be snapping pictures of a cute little coatimundi scampering out of the woods and across the path behind us, sniffing at the humans as he scurried away. 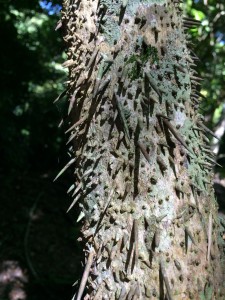 The disconnect between the increasingly scattered descriptions coming from our headsets and the objects at hand became so ludicrously discombobulated, that when my friend and I were seeing a prime example of a “Give & Take tree” with it’s five-inch black needles reaching out to grab the unwary and we heard on our headsets how “the Olmec mythology, thought to date back to 1600 BCE in the Early Formative period, had left no documents comparable to the Popul Vuh from the Maya, so any exposition of Olmec mythology must be based on interpretations of surviving monumental and portable art,” we burst out laughing at the chaotic juxtaposition of artifacts and information.

We turned our headsets off and my friend practiced her Spanish to English translation skills in order to read the plaques as we strolled along, no longer part of the group and glad of it. Traveling with a very large group appeals to some, I know, but not to me.

Tour Guides — the Useful and the Useless

I’ve taken tours when the guides were indispensible. With minimal fuss they got me where I needed to be, they knew the history, and they could shape it into a story arc that riveted my imagination and cemented the information in my mind. They don’t know that (very silently) I adored them.

I’ve also taken tours where the guides were vacant as to information. If we passed a shopping mall, s/he would say, “On your left is a shopping mall.” Worse, s/he would expect me to buy whatzits from the cousin of the best friend’s uncle’s brother who s/he claimed had the best whatzits we’d all been desiring—at a price “special for you.”

But the guide at the Parque-Museo de La Venta, the outdoor museum of Olmec artifacts (and I’m not talking about the local Mexican guide who did a fine job), proved himself a new variation in frustration. Every area of specialization has its own language, and for the first few days of the tour we’d been overwhelmed with the breadth of his expertise and the speed of his delivery, as though his erudition were over-flowing, like uncontained waters from the depths of a vast intellect.

After a couple of days of this, however, it began to feel like we were trying to get a drink from a fire hose. I longed to hear a focused examination of a limited set of archeological objects at hand, not the fast and furious review of every deeply held precept around which he had built his life.

Sometimes people-watching in an airport yields interesting results. This combo may be the definition of copacetic.