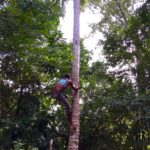 You’ll find paradise amidst the trash at Playa Rincon when you visit the Samana Peninsula on the north shore of the Dominican Republic. Conde Nast Traveler rates Playa Rincon as one of the world’s top ten best beaches, and it is. But what you see depends on which direction you turn at the entrance to the beach. There is only one access road, which is unpaved and grows increasingly sandy and unkempt until it suddenly opens onto the sand of the beach. Cars simply park in the shade of the trees. (But avoid the coconut palms for obvious reasons!)

The Best and the Worst

Here’s an example of the best and the worst only a few hundred yards apart on Playa Rincon. If you turn to the right, the famous beach is creamy-white pristine sand, polished by the relentless ocean waves. Tour boats come and go, and vacationers splash and snorkel in crystal waters. Skins turn golden or red under the tropical sun, depending. 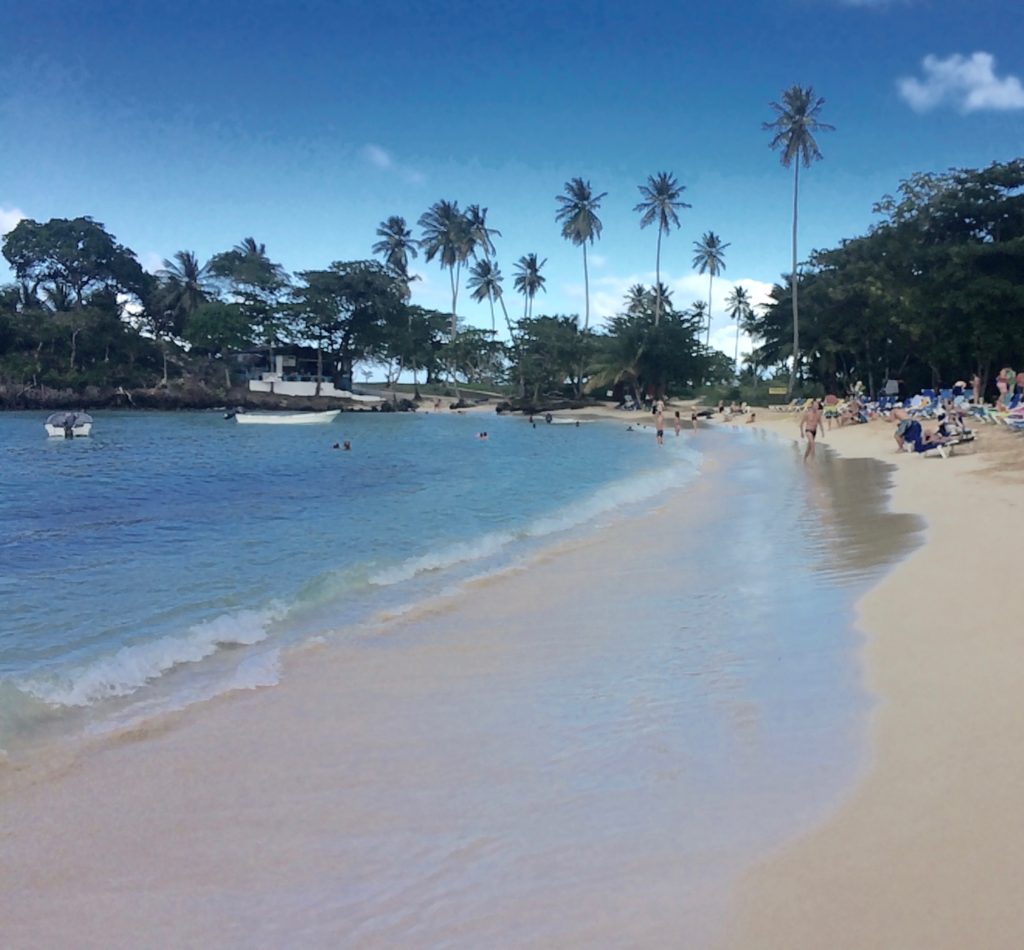 Playa Rincon to the right 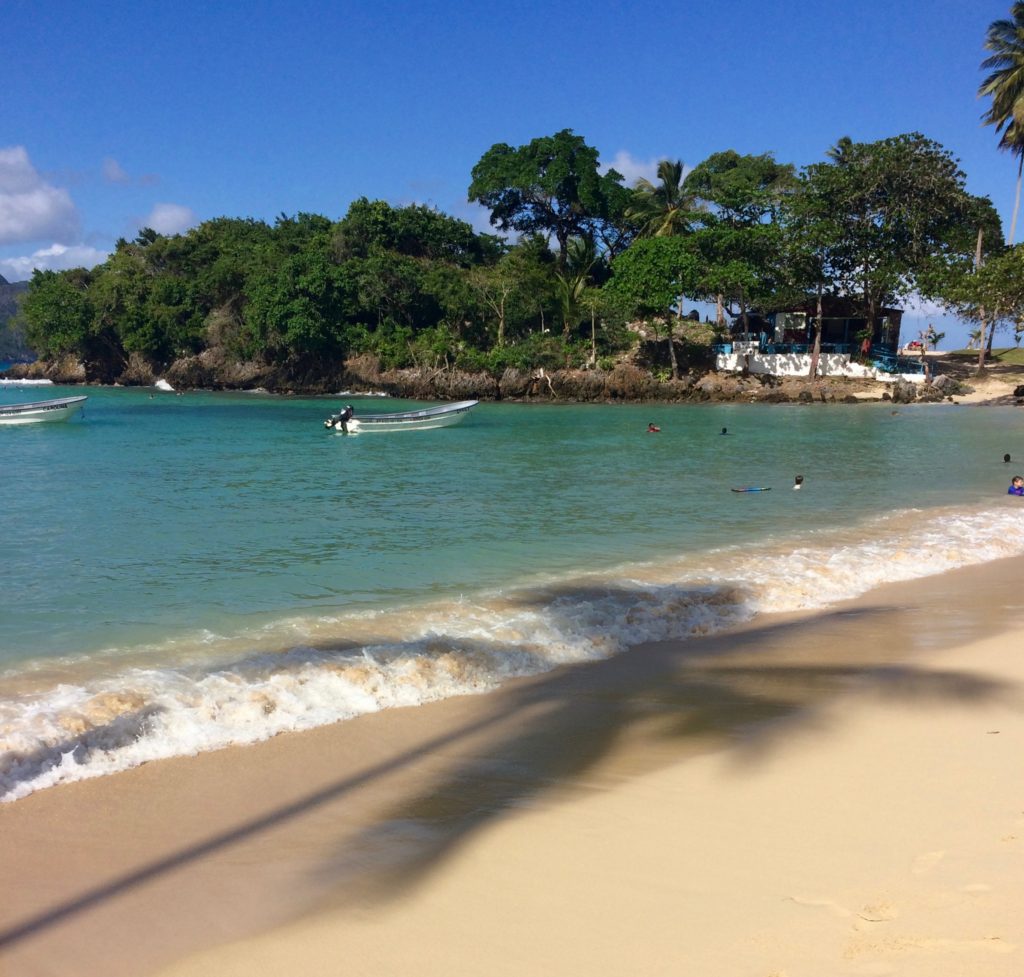 If you turn to the left, you will have quite a different experience on Playa Rincon. The beach  laden with sea-weed may be a condition exacerbated by the time of the year and the tides, but none of the locals lounging in the vicinity showed any inclination to remove it.

Close by the outdoor barbecue, for the convenience of patrons and proprietors alike, stands a tin-covered outhouse surrounded by lush banks of odoriferous trash. You can already imagine the smell, I’m sure, but can you imagine the noise inside that privy during a rainstorm? 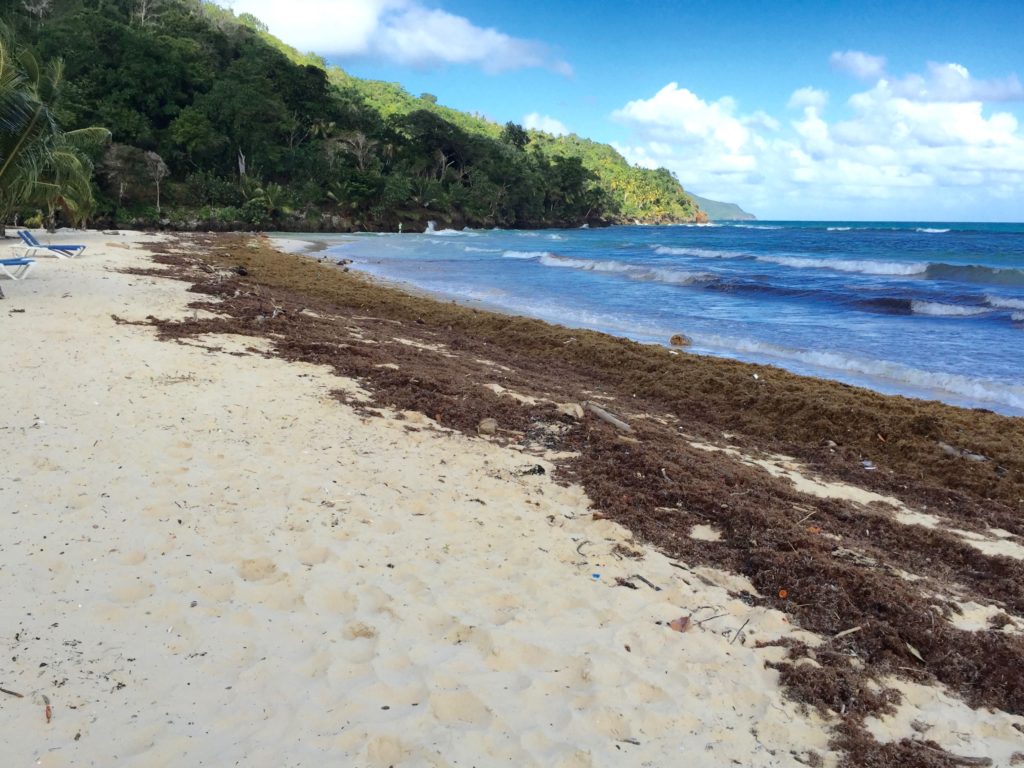 Playa Rincon to the left 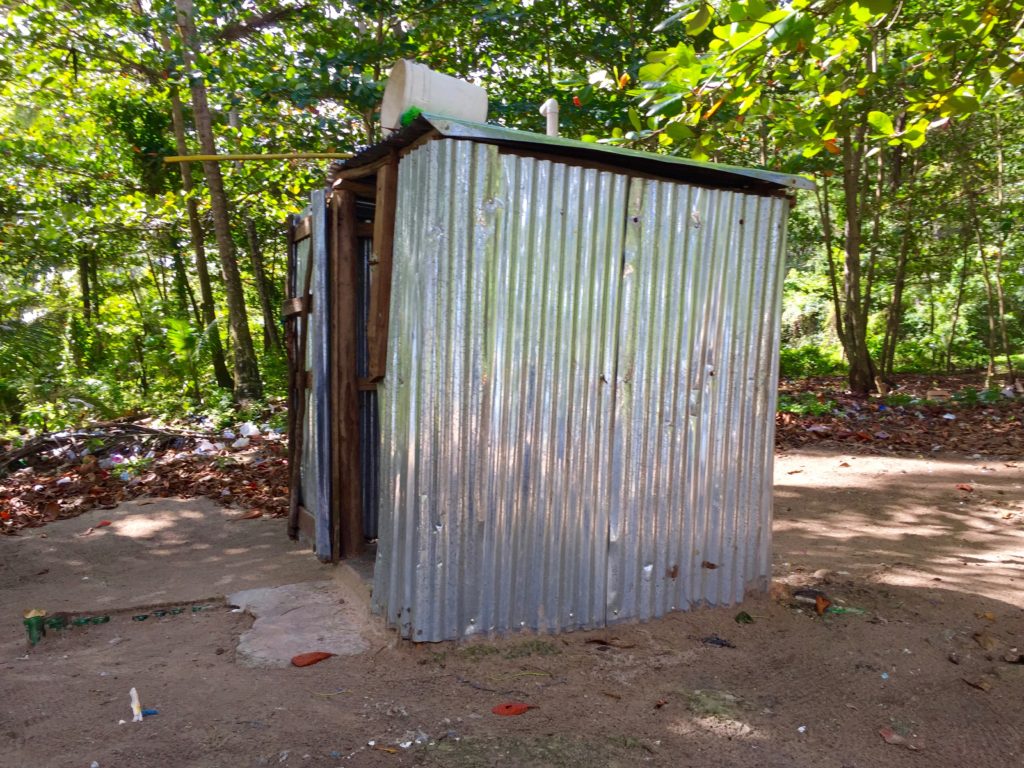 This end of Playa Rincon appears to be the hang-out for locals, and I can see why. We found a lot of interesting things to see and do that didn’t involve sitting on a beach. 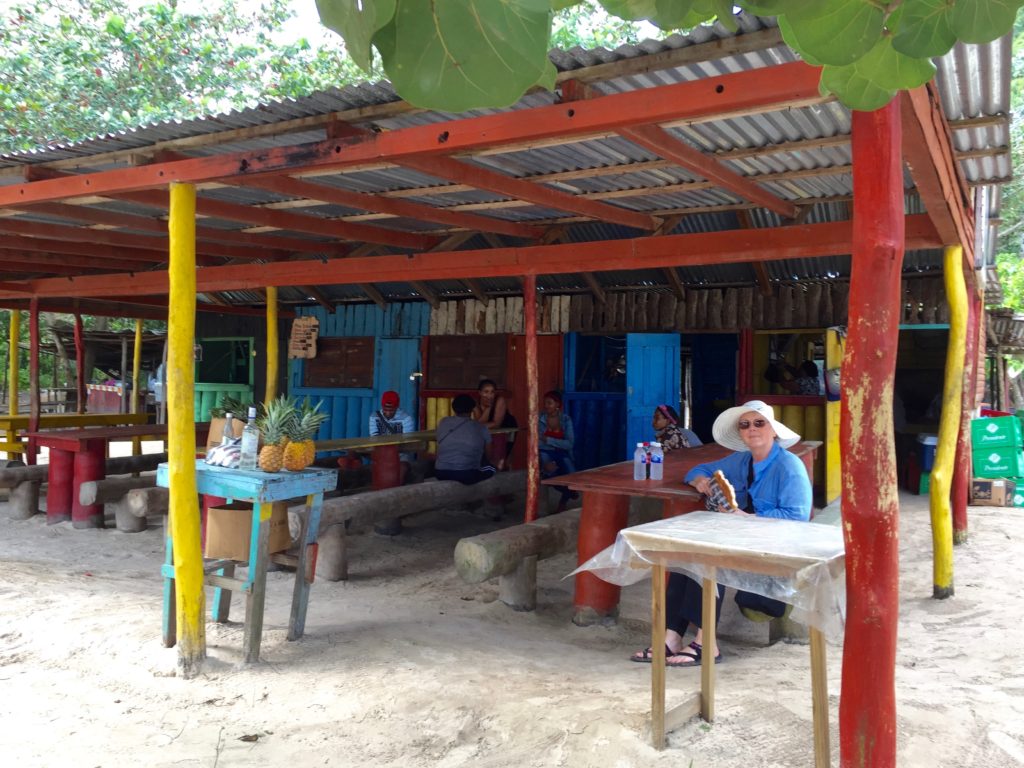 Cafe on the left beach 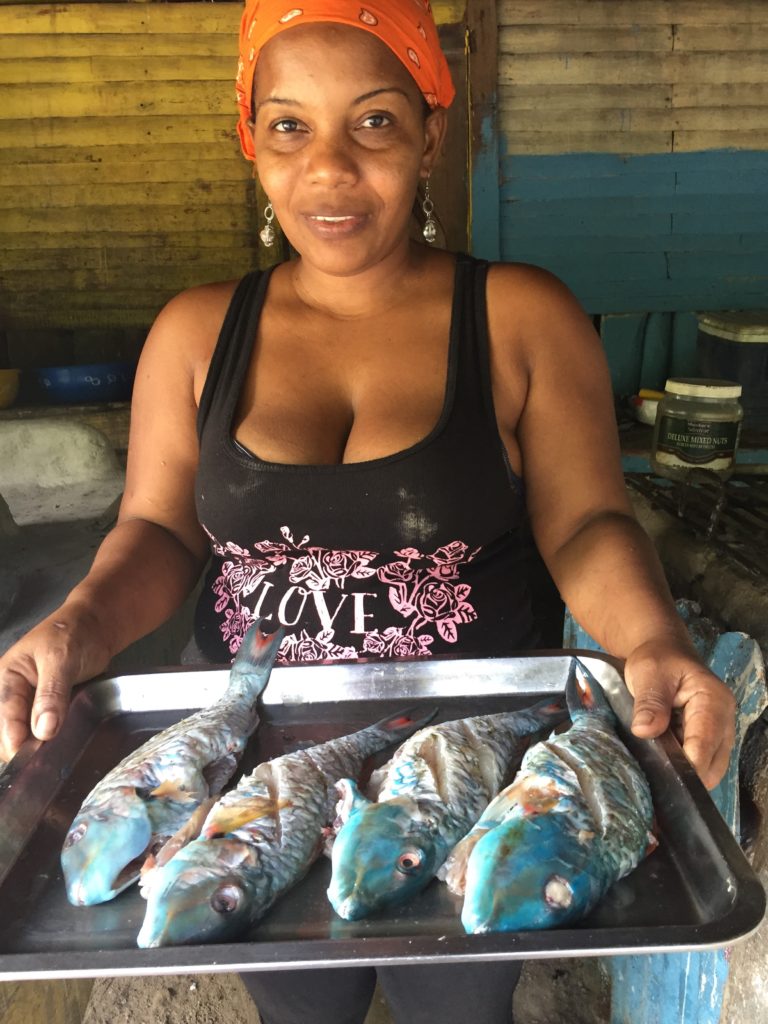 Parrot fish for the barbecue 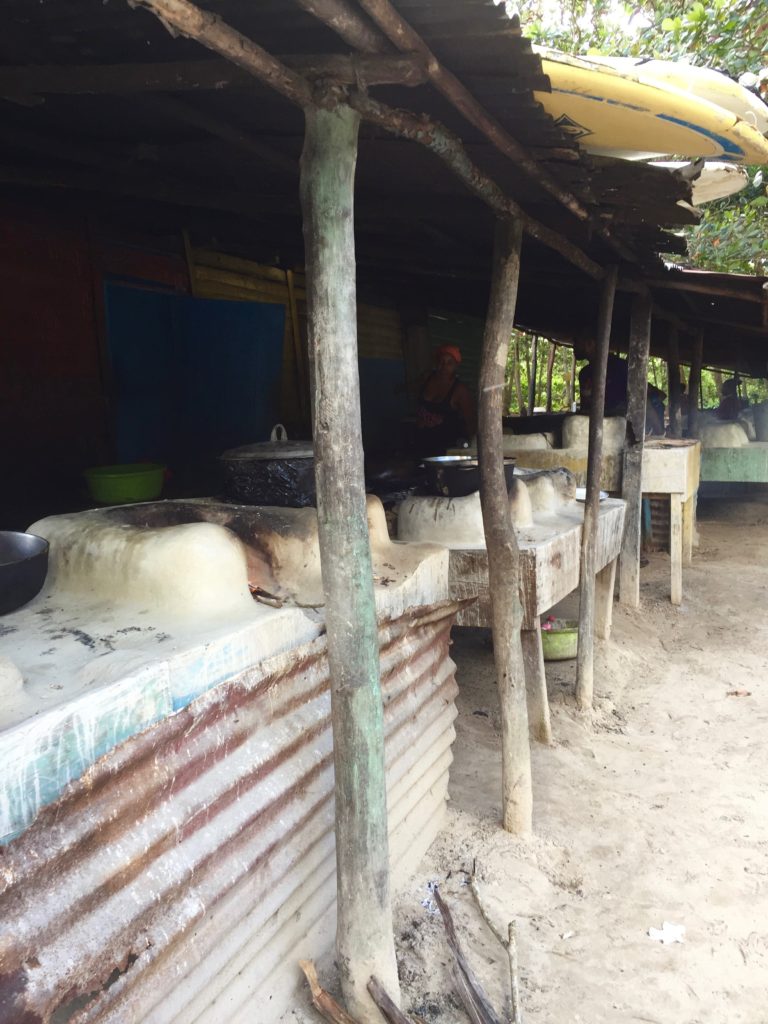 Barbecue pits out back 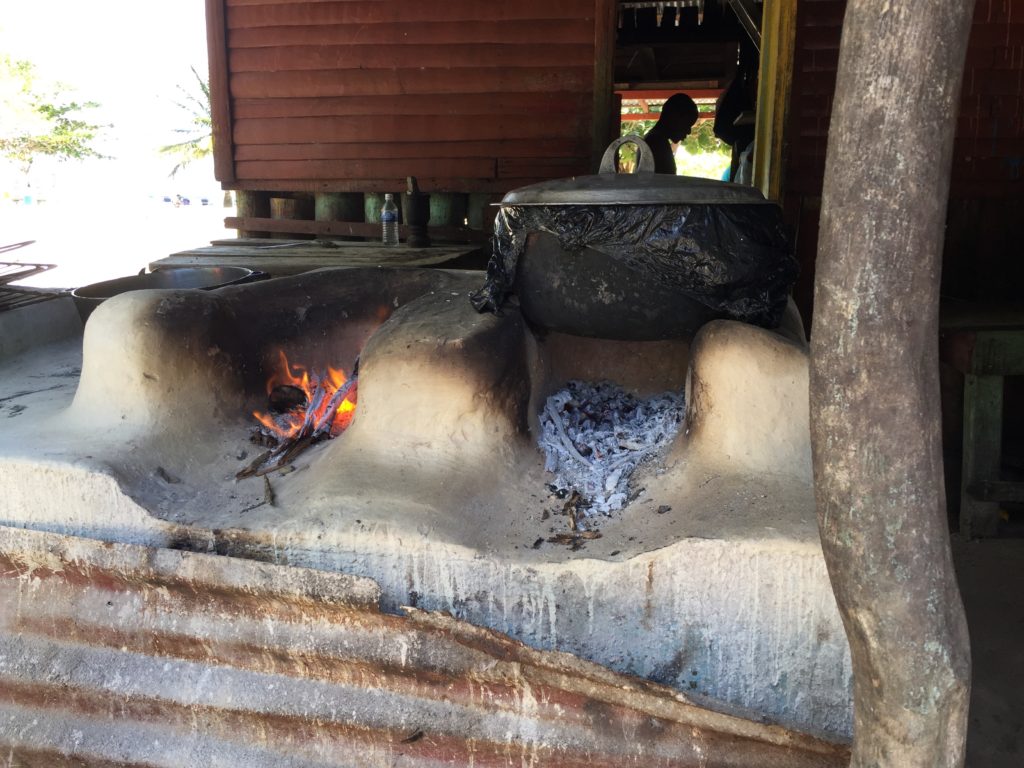 The outdoor cafe looks primitive, but go around back to see how they cook the food before you make a judgment. The barbecue pits appear to be made of some kind of smooth ceramic and are exactly sized to fit the pots the establishment uses. I’m sure the parrot fish barbecued for our lunch couldn’t have been fresher. I’ll bet they had been swimming in the sea about ten minutes earlier. Unassuming and delicious describes our experience.

A young woman carrying a large plastic container opened the lid to show me her still-warm homemade coconut bread. The scent alone sold me. The loaf I bought was discus shaped and took two hands to hold. It wasn’t sweet like a U.S. type of dessert bread, but delicately flavored with coconut and a hint of sweetness.

The Cano Frio from a dugout canoe 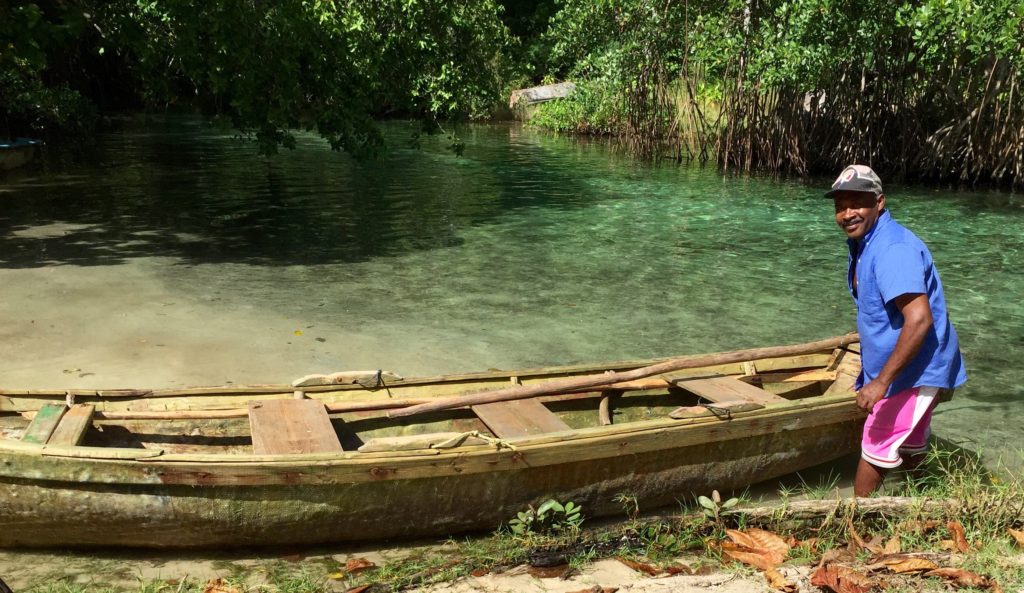 Dugout canoe on the Cano Frio 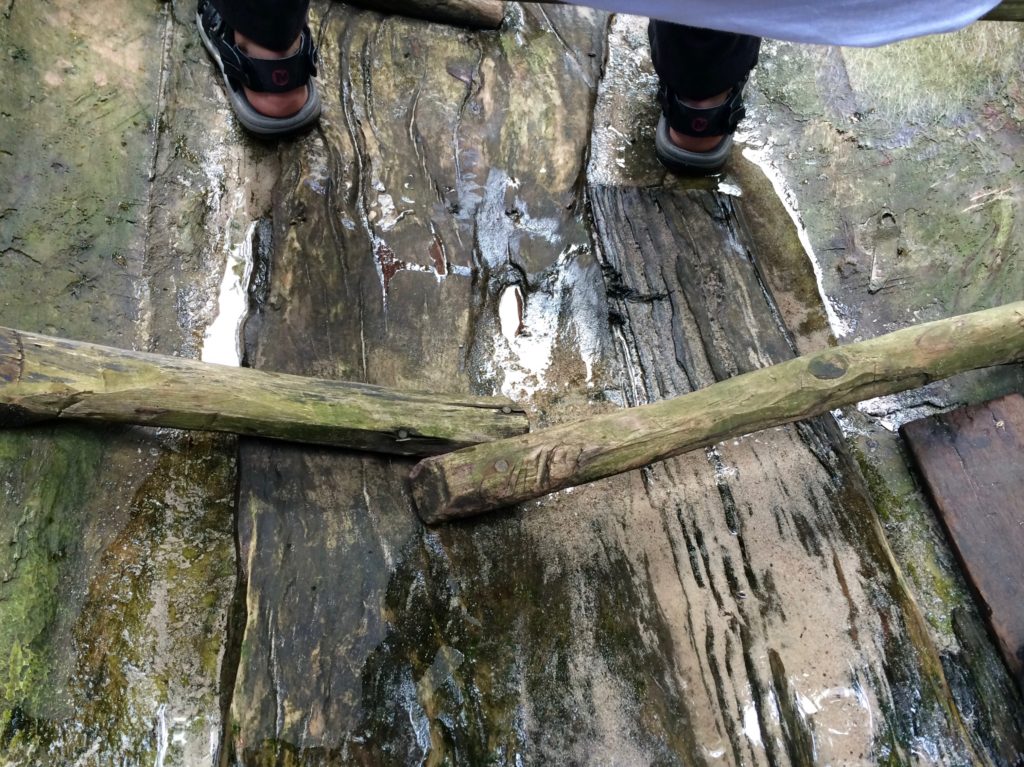 Bottom of a dugout canoe 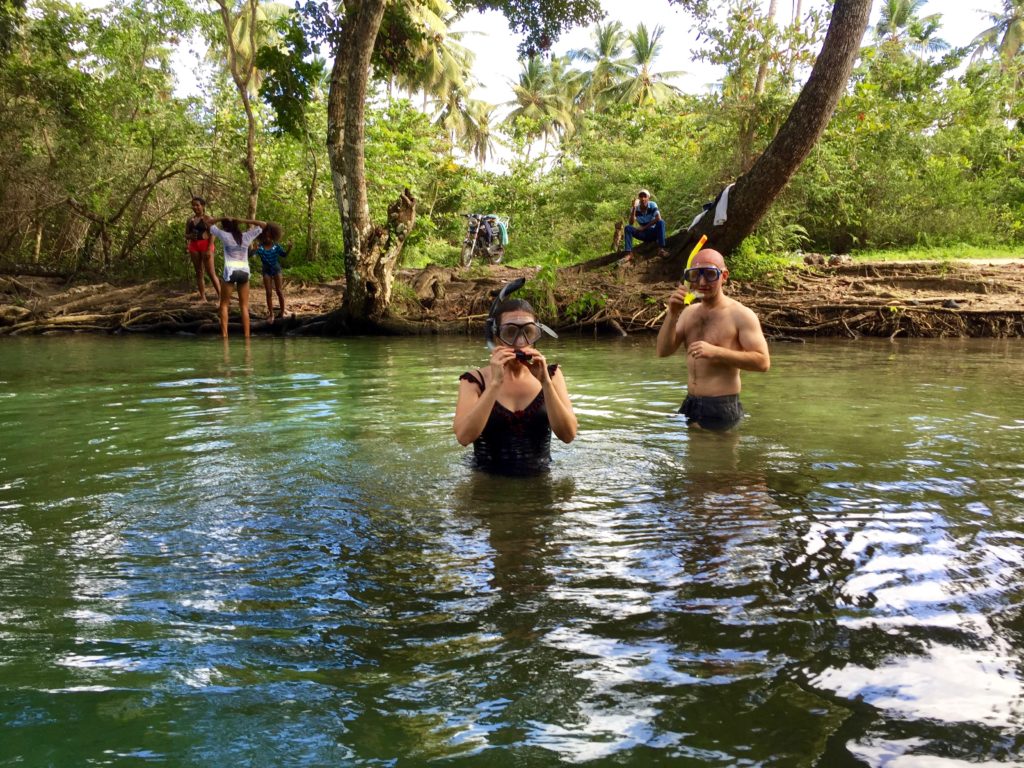 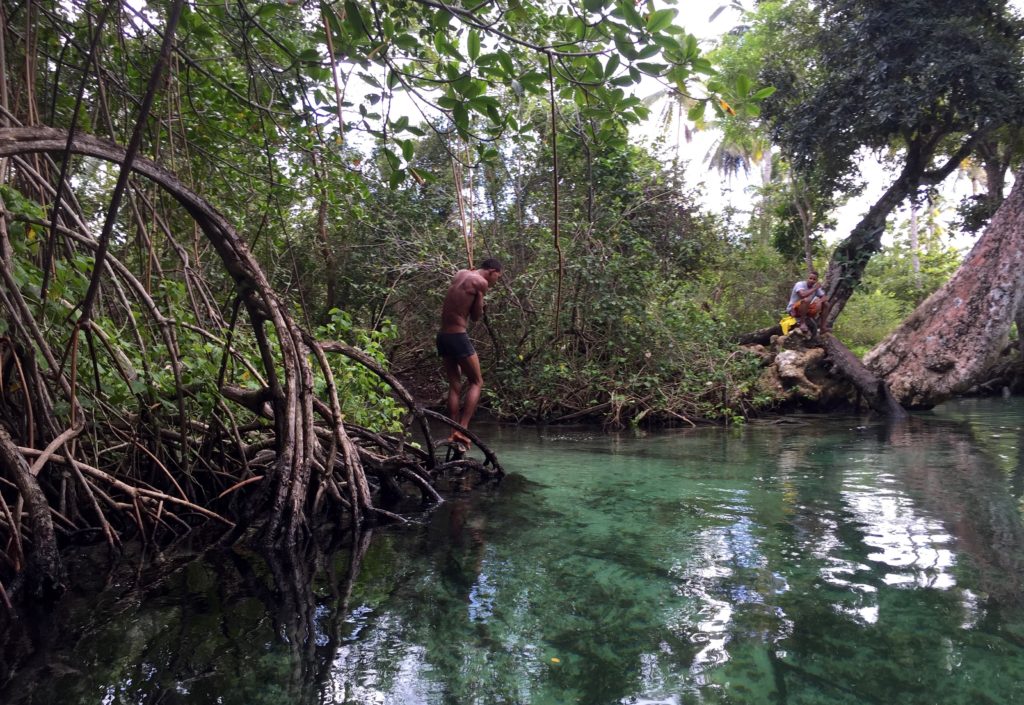 Swinging on a vine in the Cano Frio

The Cano Frio River empties fresh water into the sea at that point and a big natural pool nearby was full of families playing and splashing. We saw a dug-out canoe on the shore and hired a boatman to pole us up the river. The Cano Frio is only waist deep (in January) and lined with mangroves, but absolutely clear. We could see small silver fish and rock formations throughout the trip. 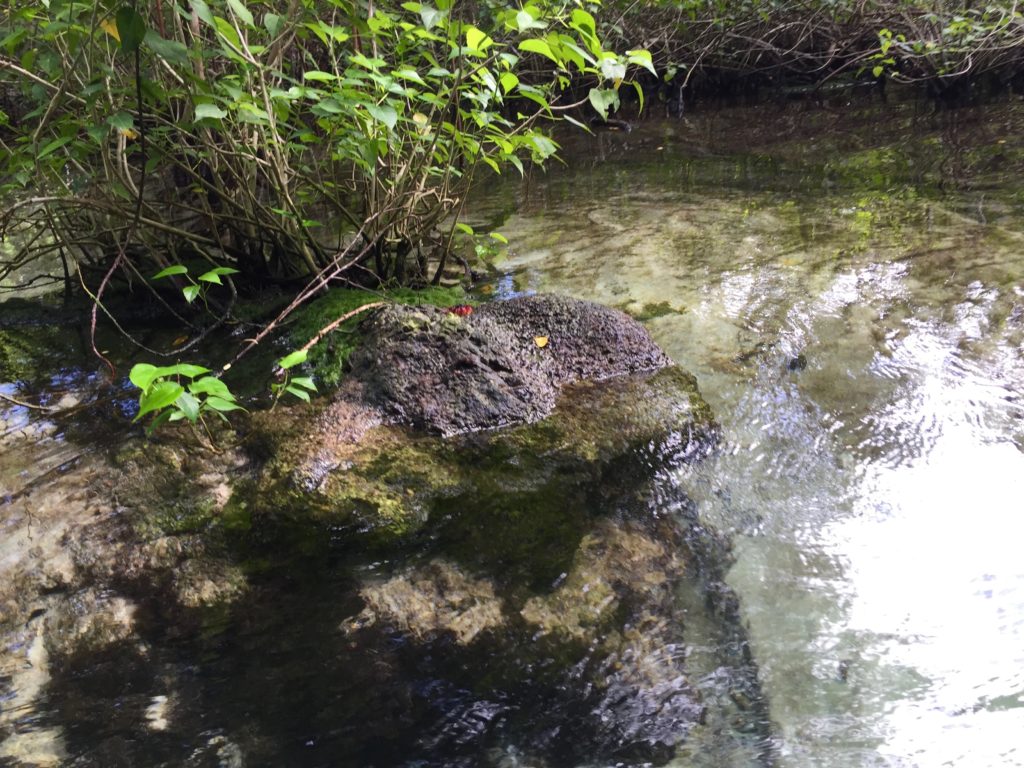 What is that dot of red on the rock? 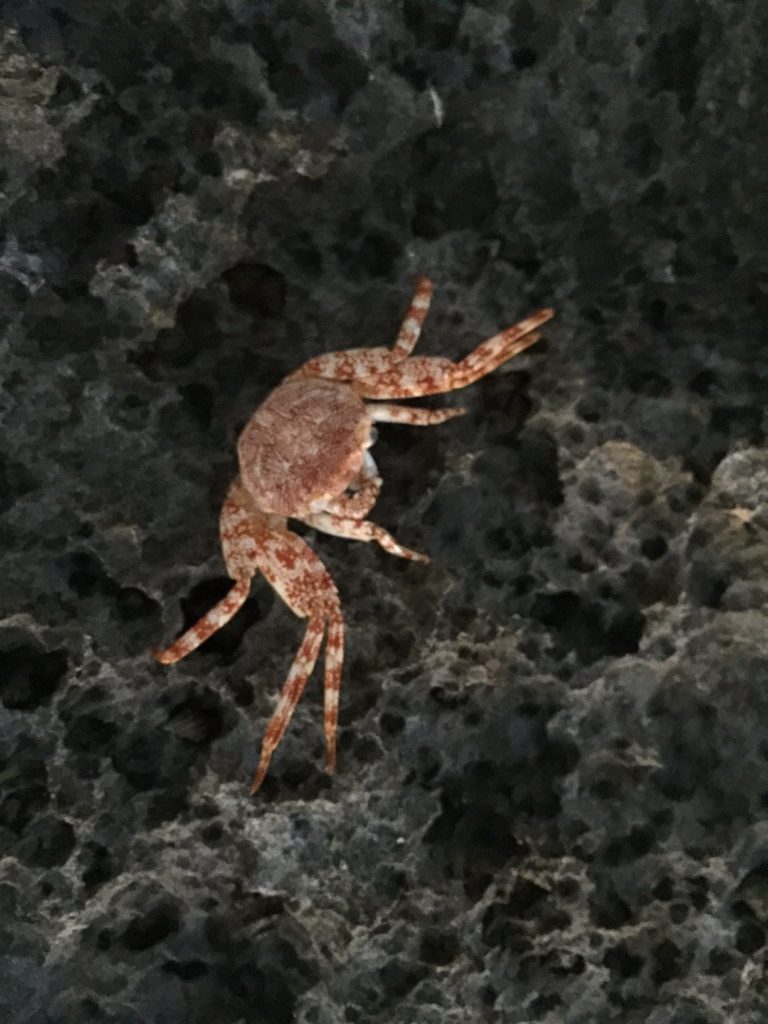 That dot of red is a tiny crab 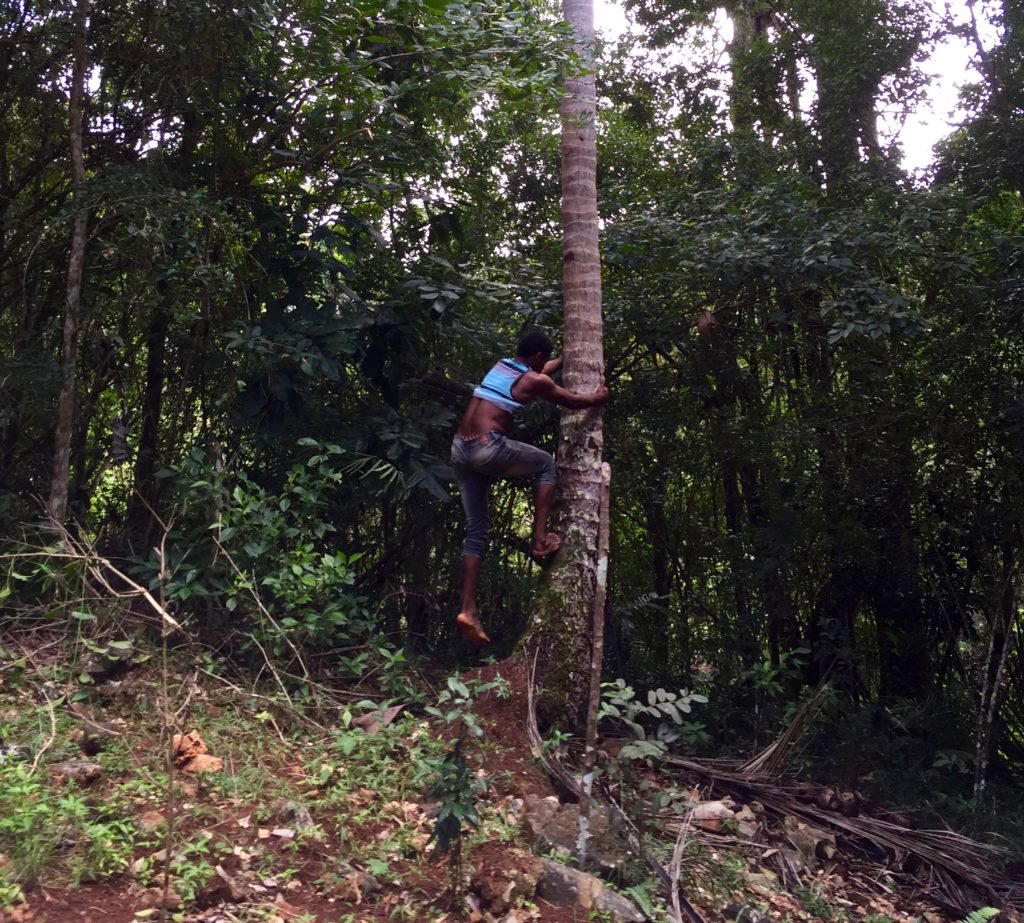 Shinny up a coconut palm 1 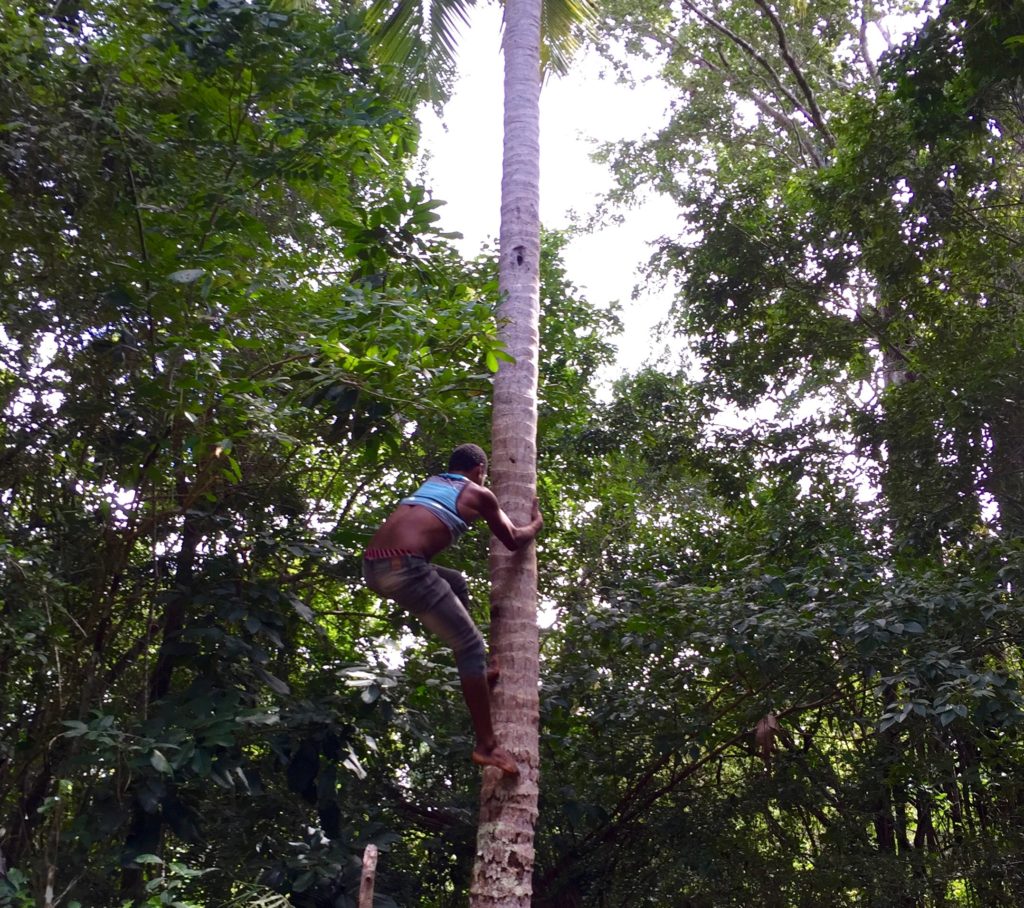 Shinny up a coconut palm 2 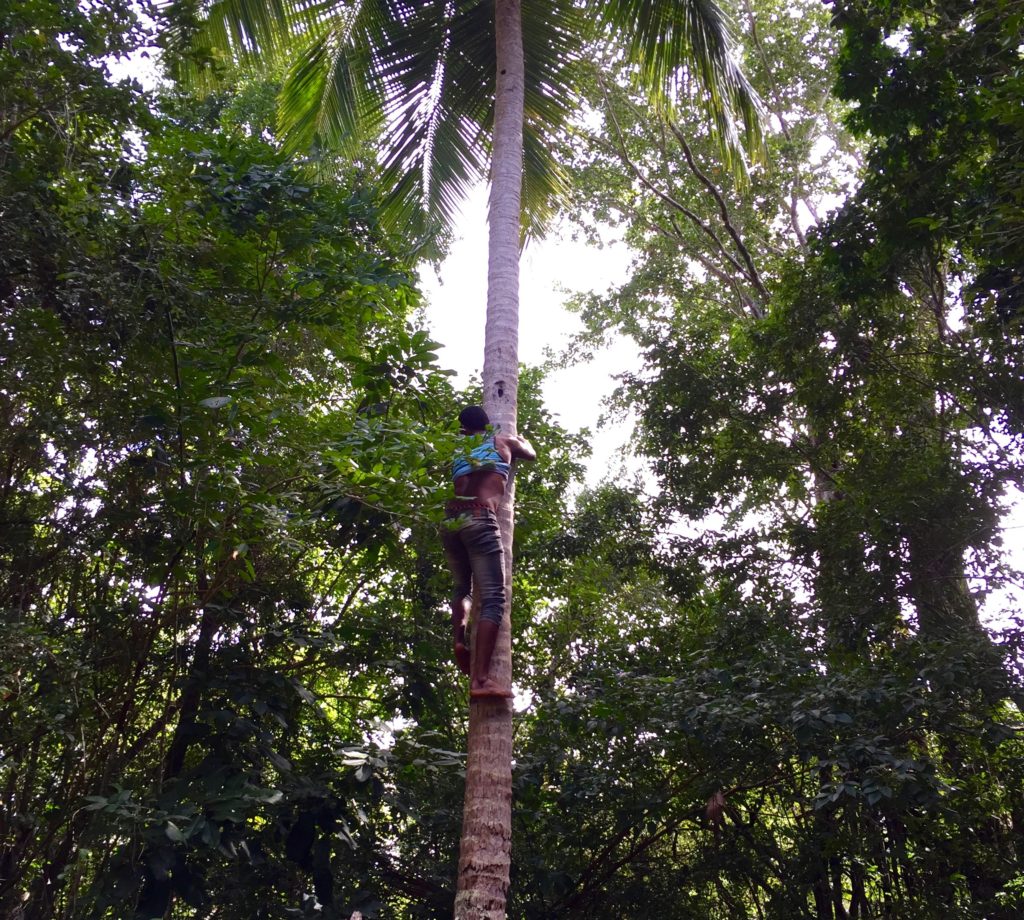 Shinny up a coconut palm 3 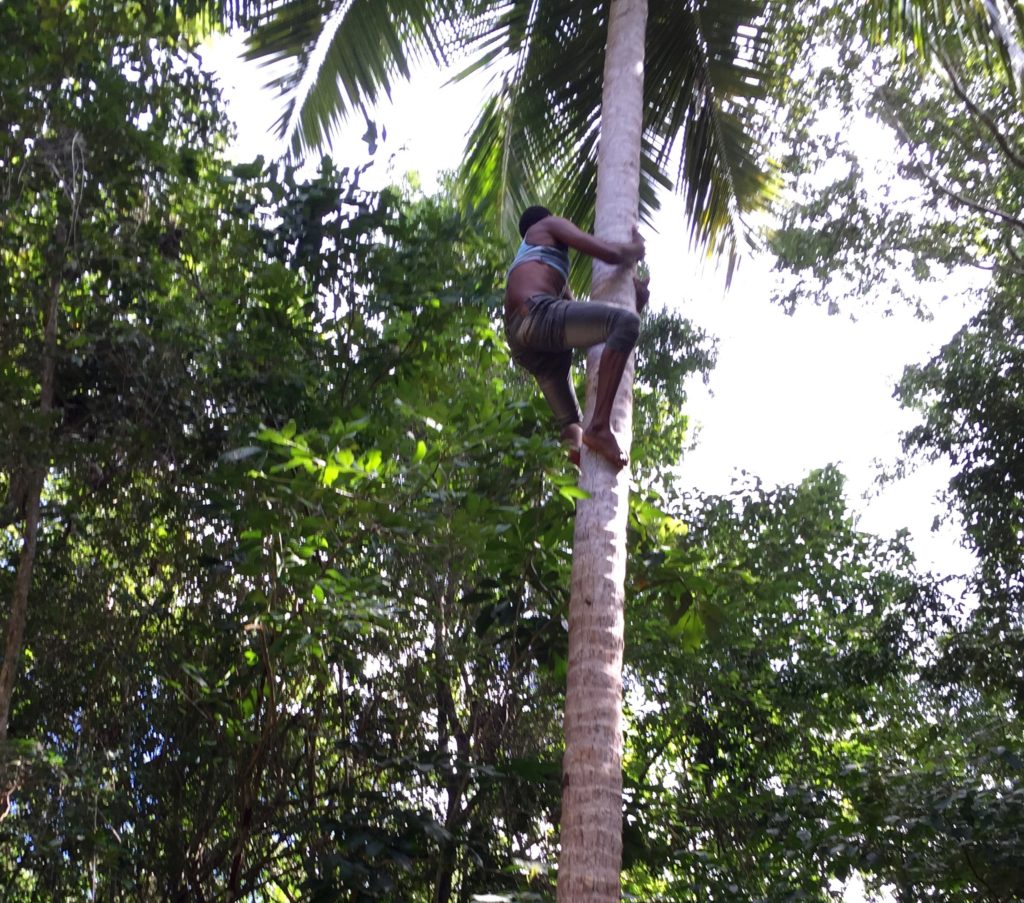 Shinny up a coconut palm 4 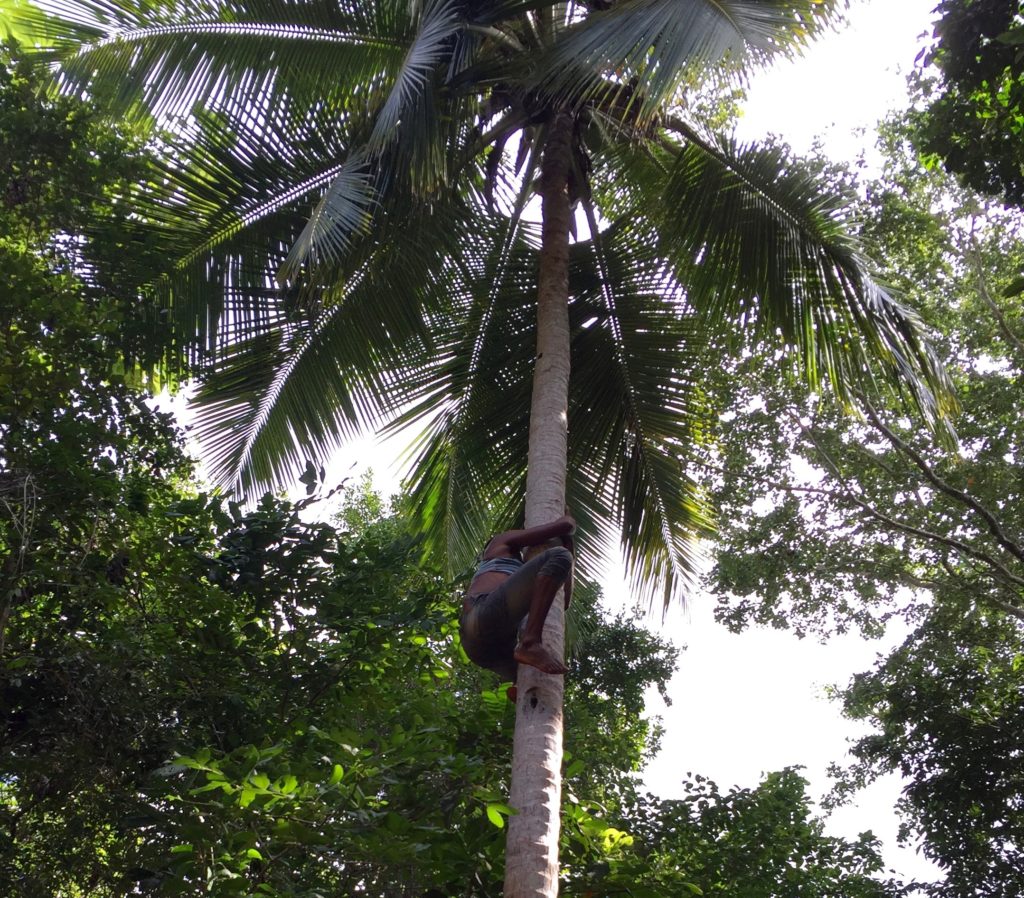 Shinny up a coconut palm 5 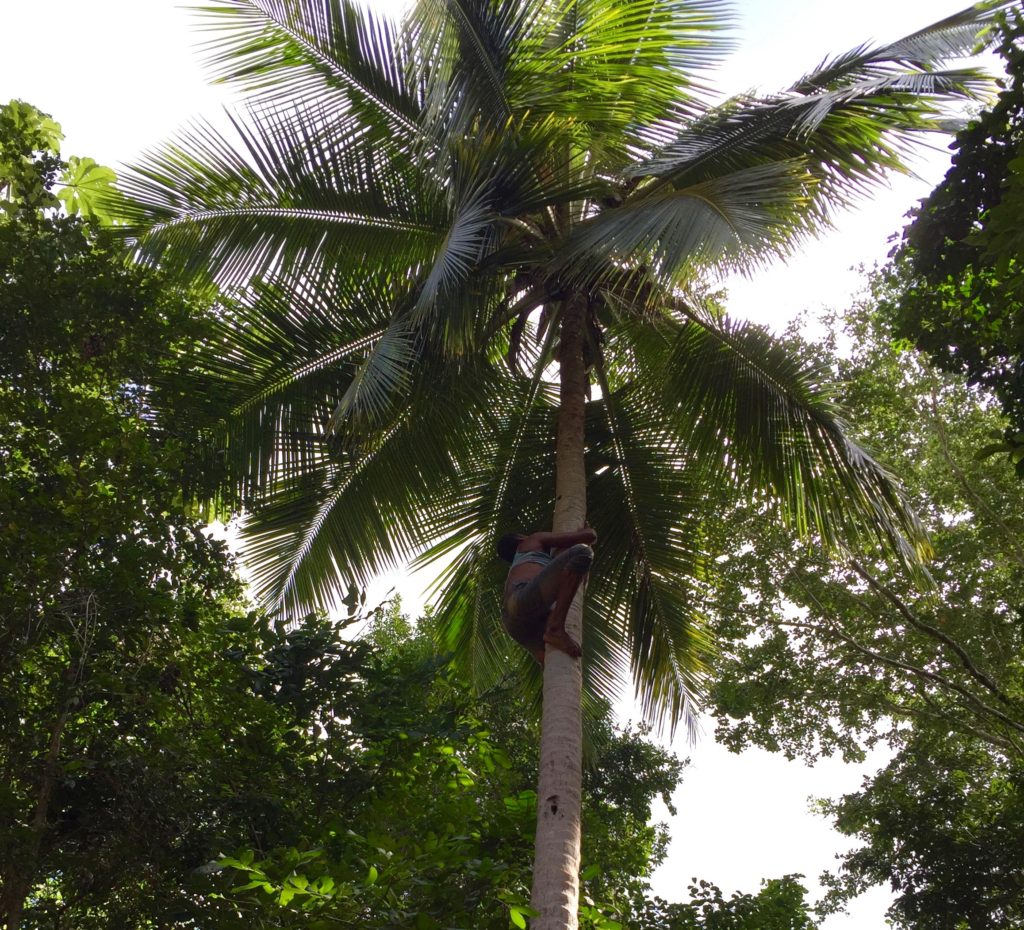 Shinny up a coconut palm 6 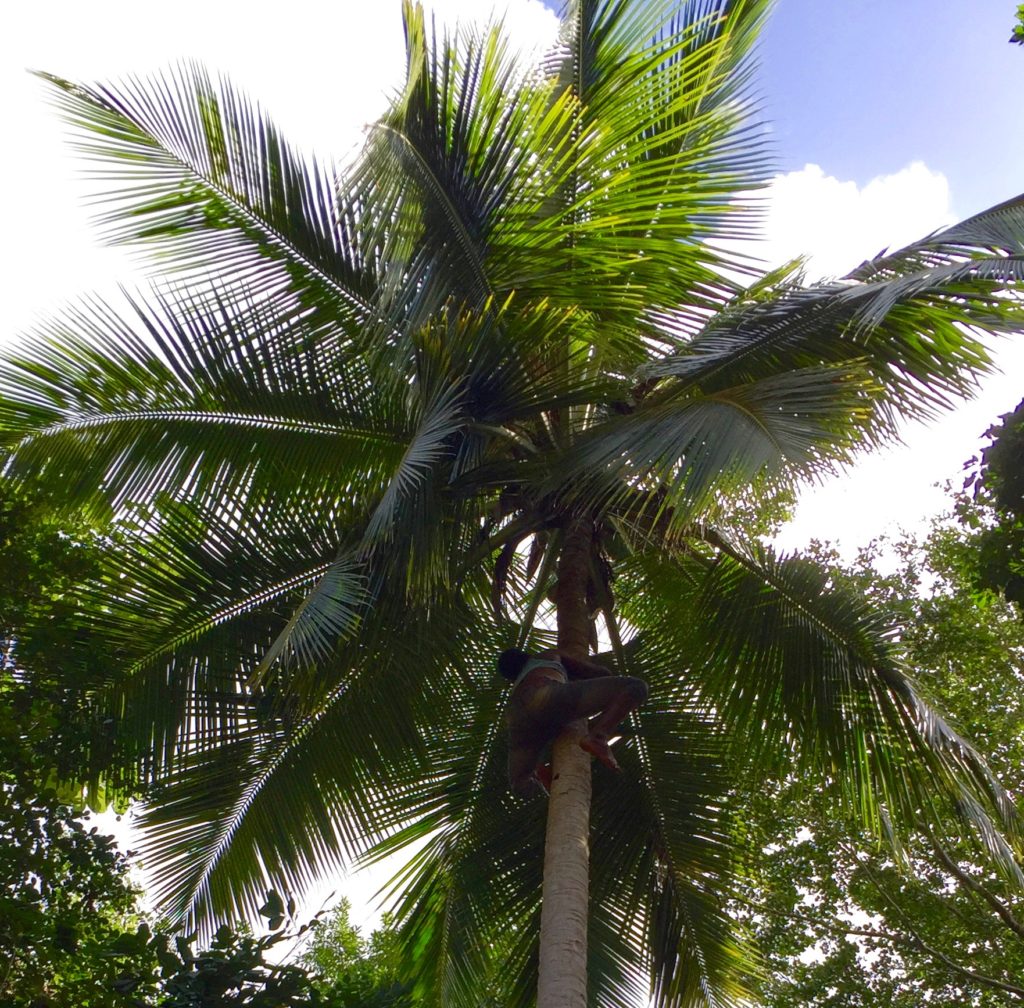 Shinny up a coconut palm 7

The young man poling the dugout asked if we were thirsty for a coconut drink. Well, of course! So he poled the dugout to the bank and we all scrambled up. Then he shinnied his way up a likely coconut palm and from some remote place up in the dark, the coconuts started raining down.

We were smart enough not to stand where they were falling, but not quite smart enough to calculate for the bounce they made when they hit the ground. Those hard round balls veered in completely unforeseeable directions. My friend took a hit to her shin with a contusion that ever since has been shading from red to green to black. Now I understand why flying coconuts are listed as a prime cause of death during a tropical storm. 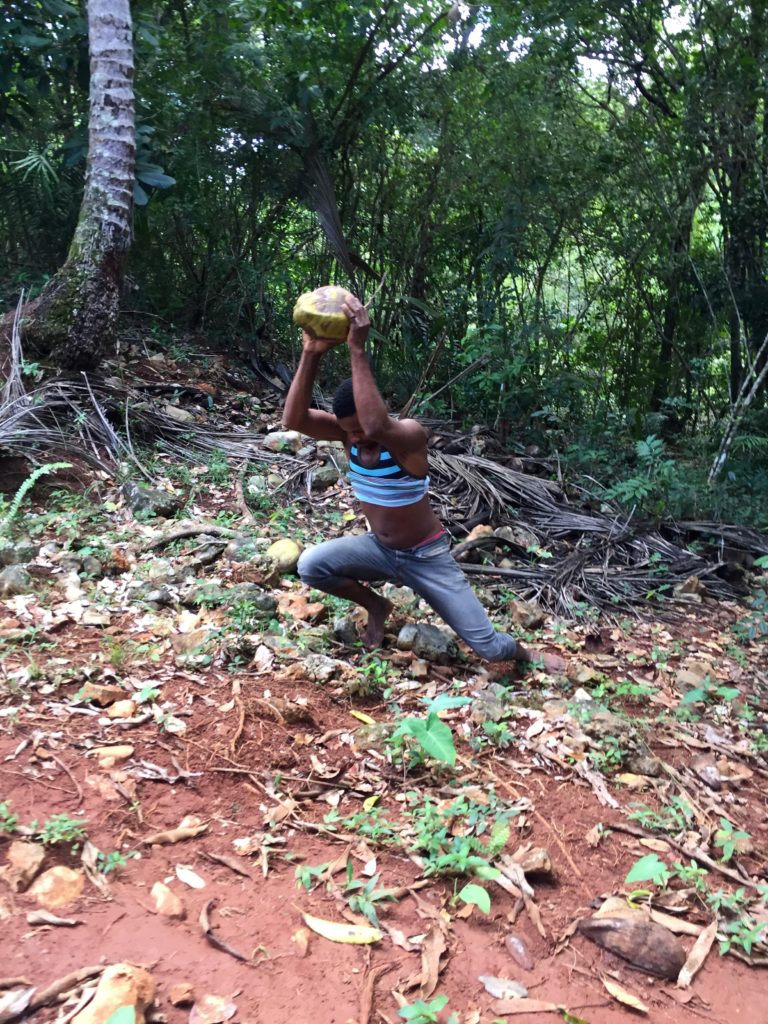 Taking off the outer coconut husk 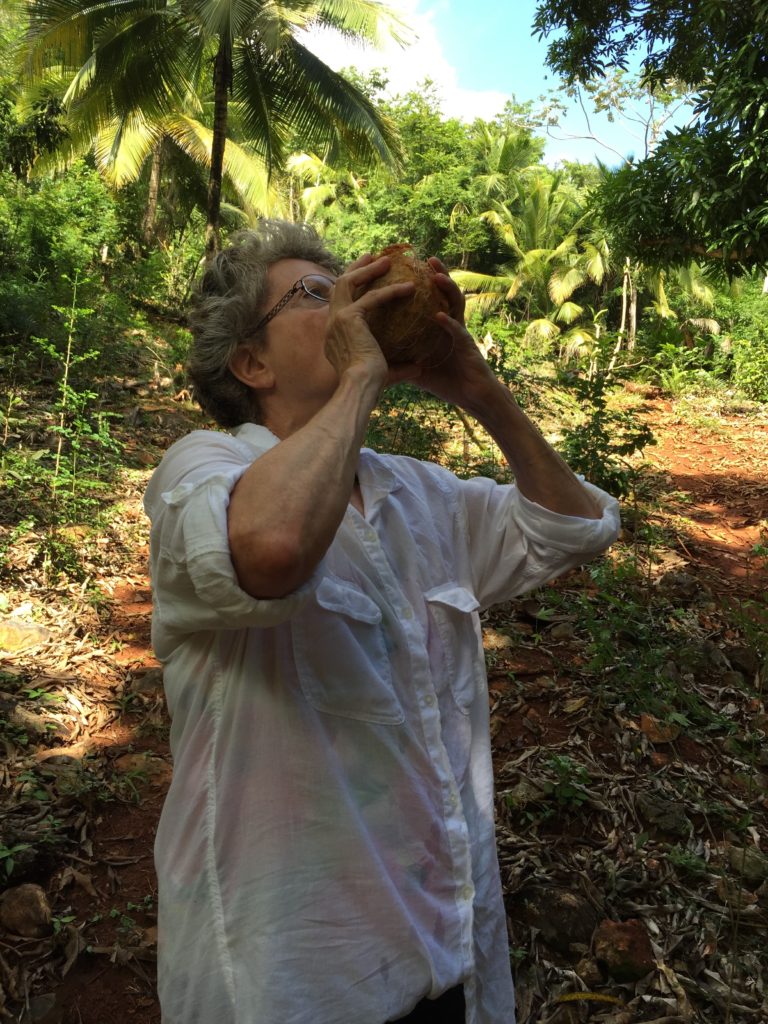 Our boat captain hacked the fibrous outer shell off the coconuts using a bit of exposed lava rock and then broke open the top of each coconut to present us our drink. Cool, refreshing, and absolutely delicious! My only regret about this episode (aside from my friend’s contusion) was that none of us had brought small bills with us on the boat. We indicated to the boat owner what was rental fee and what was tip, but judging from our agile guide’s scowl, he may have been stiffed his share.

I can’t help wondering why civilization so often leaves an ugly mark. This Caribbean island could be a taste of paradise. Why does trash accumulate around lower socio-economic areas? Don’t the locals see it? What is there about “not seeing”? The friend I travel with likes to siphon out everything that isn’t beautiful; I need to record it all! Both are choices that have become habitual, and thankfully we’re learning to see through each other’s lenses.

But that’s not quite the same dilemma as people who ignore trash on every side. If I were regent of this tropical island, I’d give every unemployed person a job picking up trash for their welfare check.