Morocco’s deserts of sand and gravel are key to appreciating both the beauty and the dilemma of this colorful country. As I traveled from region to region, I was amazed to see so much dry gravel where I had expected to see flowing sand dunes. I have to confess that I spent most of my research time prior to my trip reading about the political and cultural history of Morocco and very little on the terrain and natural history. Consequently, when I came home I needed some time to rethink what I had seen in the country.

So you don’t make the same mistake, I’m writing several more posts on the land itself. I first wrote about how the massive amounts of sunshine in Morocco provide solar power in the article, “To Understand the Amazing Country of Morocco.” Another blog will discuss how water makes everything happen in Morocco, “Liquid Treasure of Water Flows Above and Below.” This blog is dedicated to terra firma, the ground under our feet — the great Sahara.

Remember that Arabic is a language of consonants that renders vowels less consequential than in English. For example, the Arabic word for “desert” in English can be spelled “suhra’” or in the more popular variant, “sahara.” So if you say Sahara Desert, it’s like saying desert desert.

The world needs to recognize that desertification is ongoing in northern Africa with the Sahara constantly growing in size. The United States could fit inside it with thousands of square miles left over. Many countries border this vast region besides Morocco: Algeria, Chad, Egypt, Eritrea, Libya, Mali, Mauritania, Niger, Sudan, and Tunisia. Since many of these countries tend toward instability both economically and politically, a concerted reclamation effort by the eleven states unfortunately seems unlikely.

Thoughts of the Sahara invariably conjure up images of endless giant sand dunes. And yes, there certainly are dunes; in the south of Libya, some tower to over 400 feet high. One could stack the Statue of Liberty on top of itself, and hide both versions behind one of those towering dunes!

However, in many places, the sand comprises only a thin layer atop a gravel substrata. In other spots the shifting sands have in fact laid bare the gravel base. It is estimated that, overall, the Sahara is just 30 percent sand and 70 percent gravel.

Sand and gravel deserts of Morocco

In the above photo, you can see the Anti-Atlas Mountains on the horizon and the barren gravel terrain facing toward those mountains. Much of the lower terrain of both the Middle Atlas and High Atlas mountains also show a similar hard gravel base.

Dunes emerge from gravel base

In the photographs above and below, notice how the sand alternates with darker patches of gravel. I took the photos as we approached the Erg Chebbi, the largest sand desert in Morocco, the border with Algeria not far away.

Camels on the rocky desert

Incidentally, the more I learn about camels, the more I am amazed at these “ships of the desert.” They can eat plants no other creature can consume, such as the prickly pear cactus.

And there are plenty of prickly pear cactus throughout Morocco. In fact, you can find prickly pears on lunch menus and you can purchase delicacies like prickly pear jam in the markets! 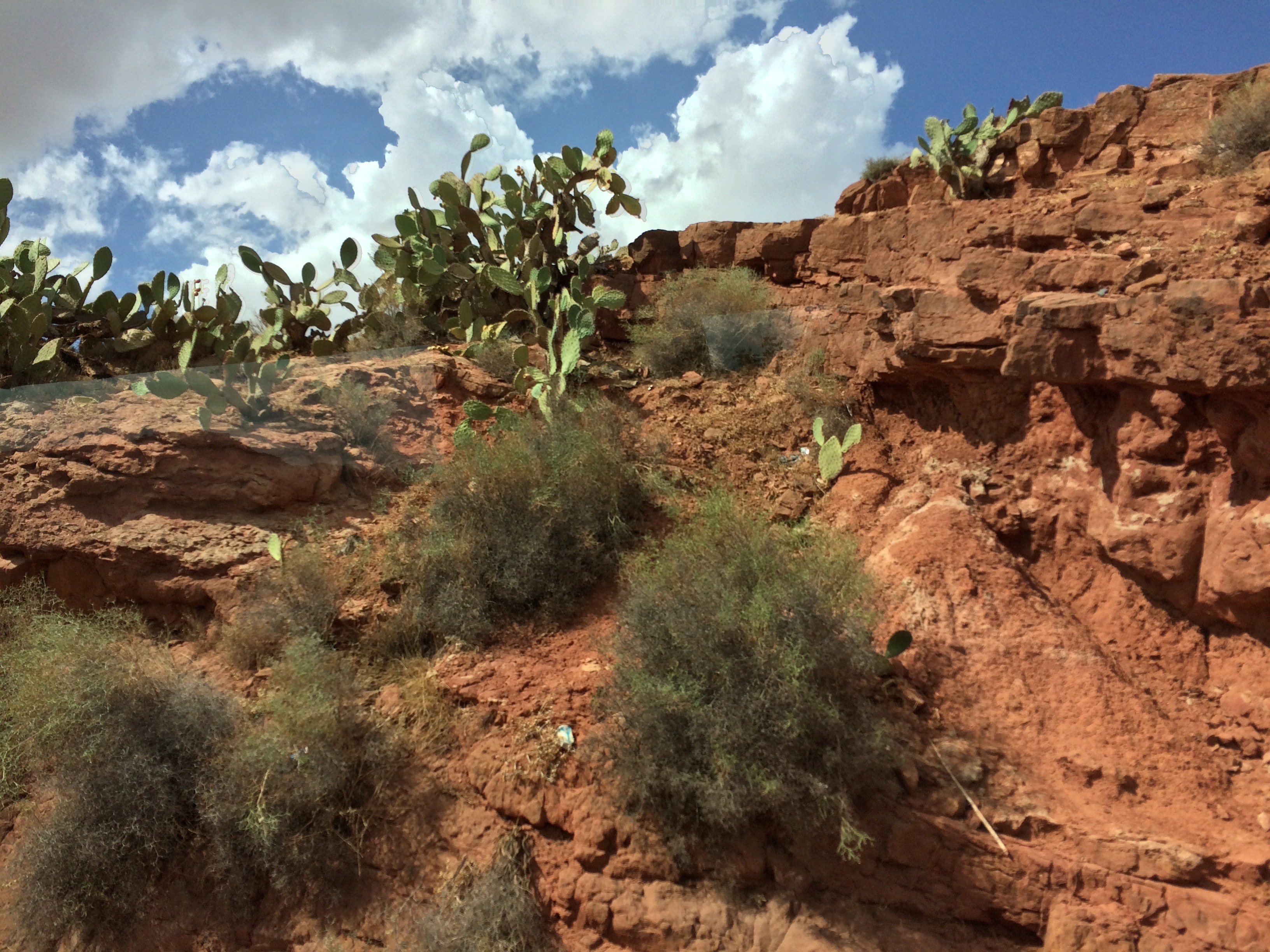 I don’t want to give the impression that all of Morocco consists of sand or gravel desert. The country is highly diverse. Because of greater annual precipitation at higher altitudes, forests cover the higher peaks of all the ranges, including the Rif Mountains, the Middle Atlas Mountains, the High Atlas Mountains, and the Anti-Atlas.

On our way to the Middle Atlas Mountains, for example, cork oak trees line the road, but as you can see from the photo below, these trees need to thrive in arid, gravelly conditions. 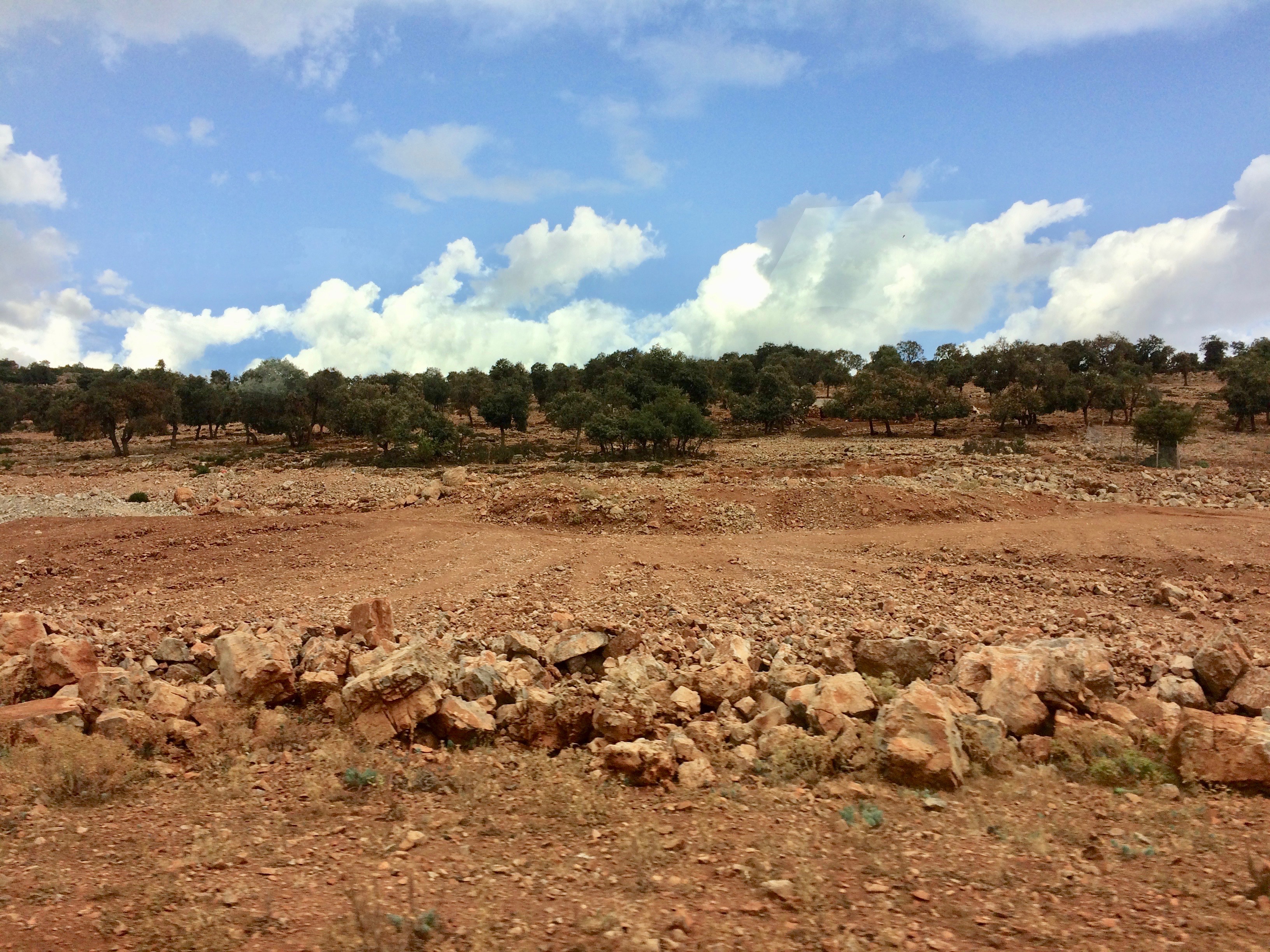 Ski resort in a desert kingdom?

As the elevation rose, soon we arrived at the picturesque ski resort of Ifrane, with architecture echoing that of Switzerland. The town even boasts its own Hotel Le Chamonix. Although we visited in autumn, I learned that in wintertime the snow sometimes becomes a factor in road conditions.

Years ago I skied the French side of Chamonix on Mont Blanc, which also borders Italy and Switzerland. While Morocco’s version of a ski resort is no match for the original, I can definitely see the delight people who are used to a desert climate would take in the change of elevation and the chance to try a wonderful winter sport.

In every direction, the summer gardens of Ifrane frame lovely views. Incidentally, note the Moroccan flag on a sign board, a five-point green star on a red background, rising behind the flowers in this garden. 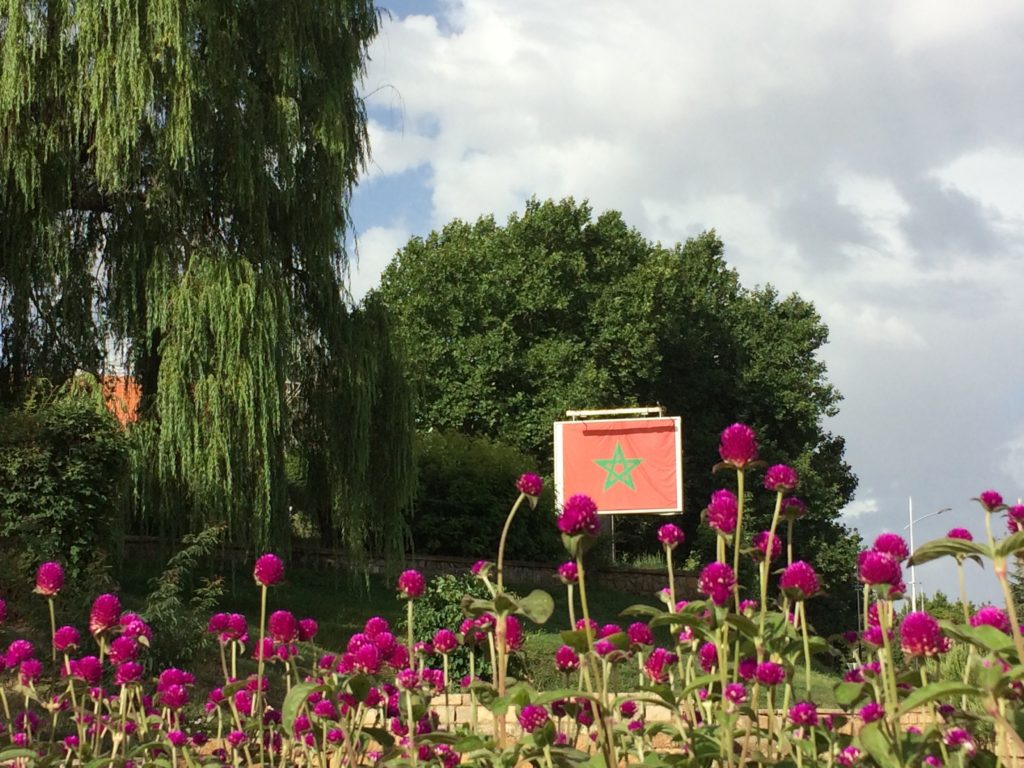 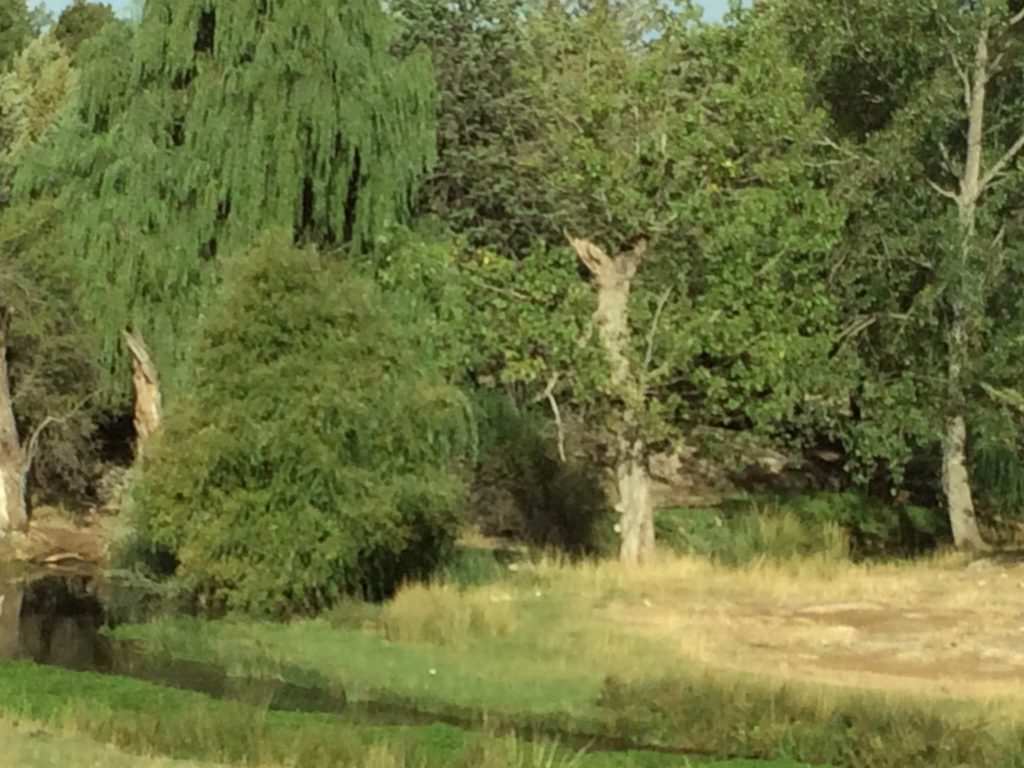 On the other side of the summit, the Middle Atlas Mountains again take on the predictable aspects of a gravel desert. But with a twist.
An interesting variation occurs with the Devonian mud mounds near Erfoud. The rocks are hard, of course, but they look like they were recently extruded by a giant mud-ball maker and might still be wet. Sort of like giant lumps of poo. 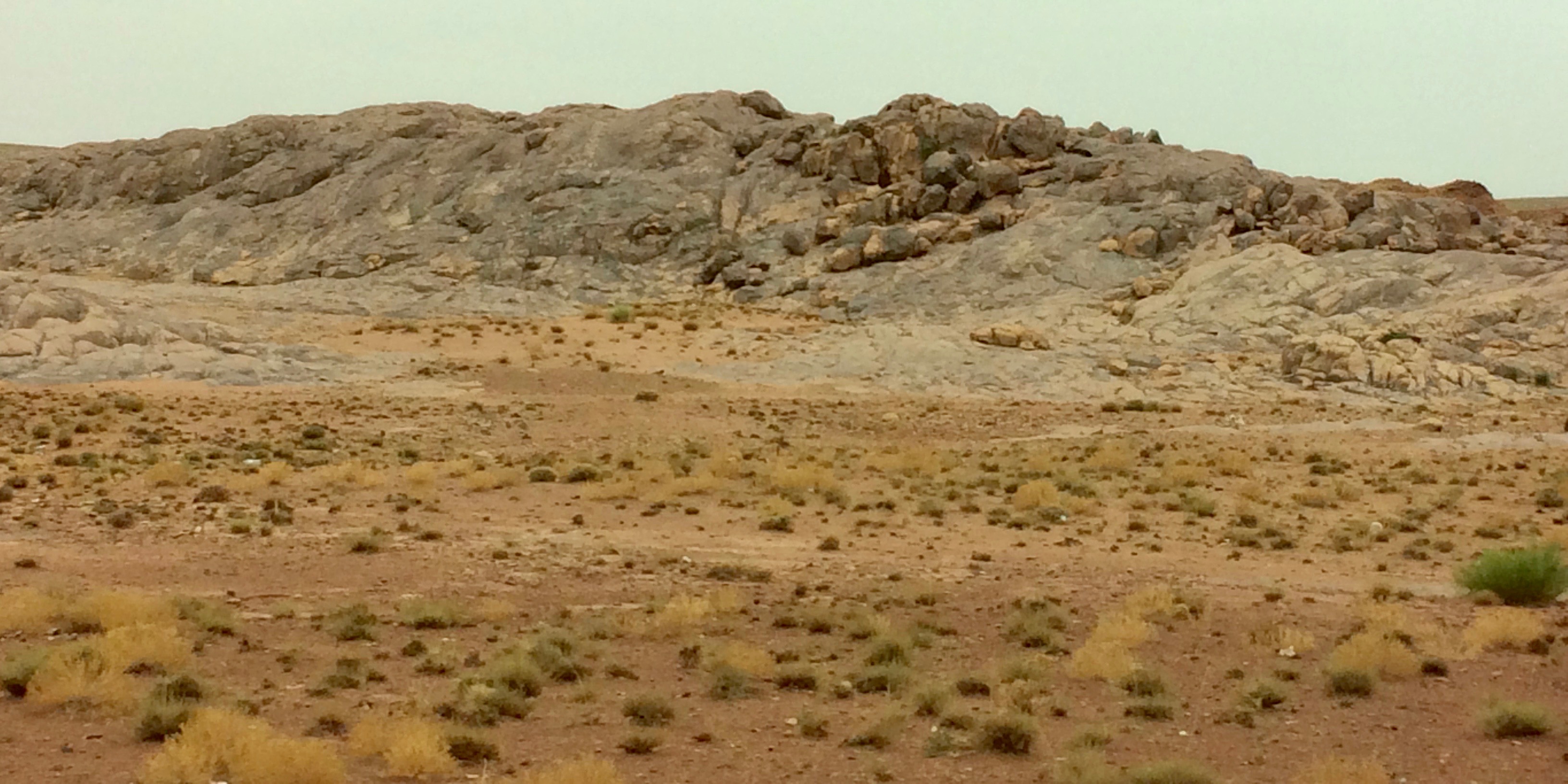 Deposits Magazine presents an interesting article for those of you interested in the phenomenal geology of Morocco, “Natural Wonders of the Maghreb (Morocco).”

Amazingly, apply a little water to what looks like a sandy, gravelly patch of dirt, and plants grow! More about Morocco’s water next week!