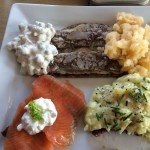 There were many meals to love in Iceland, or not, as the case may be. I’d say, however, that we’ll remember three particular meals in our ten days on the island as being truly outstanding.

After leaving Reykjavik, we took a leisurely drive to Eyrarbakki a village on the south coast. Formerly a major fishing site, it now seems to thrive on tourism. The tide was out, so we walked along the rocky beach and examined the vacated docks built on huge black boulders. I’m always fascinated by how delicate blossoms can find life in such a stark environment. The rack of drying fish made me wonder about the dried fish we saw packaged in the grocery stores. 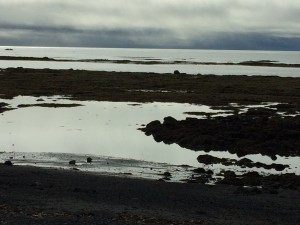 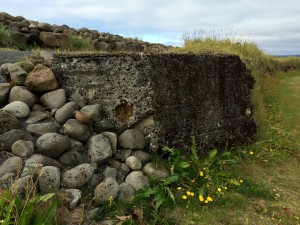 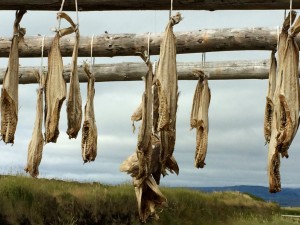 But our main reason for the trip to the hamlet of Eyrarbakki was to experience the seafood at Rauda Hassid (Red House). The lobster bisque and homemade bread was excellent; I’ve never had better. 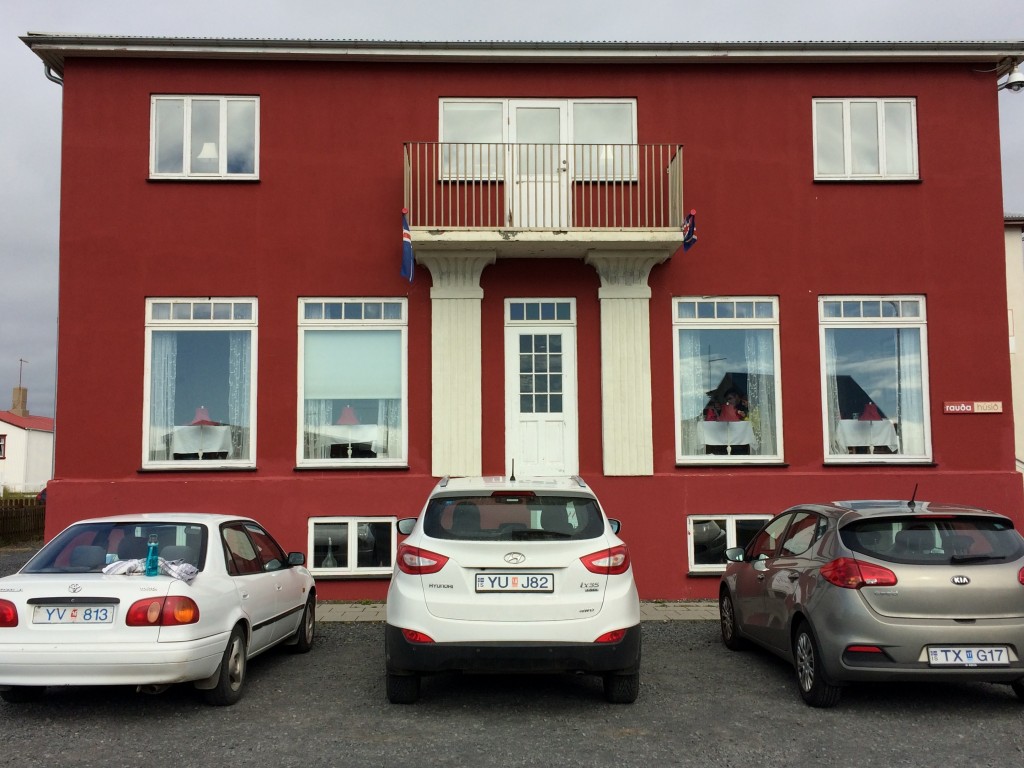 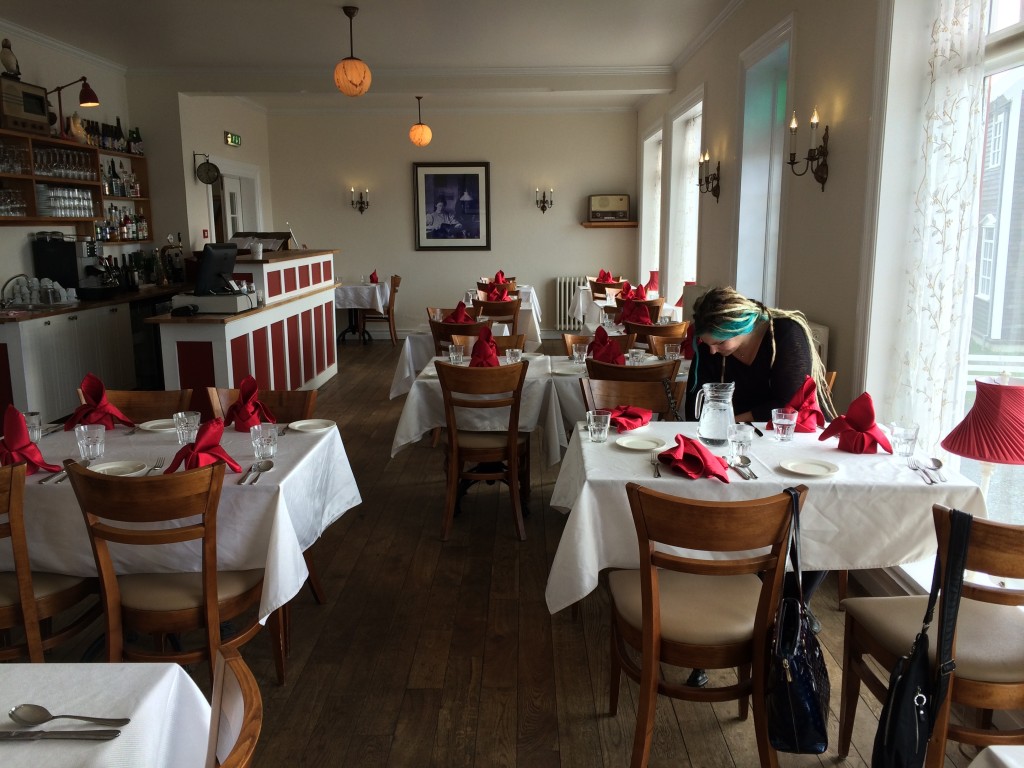 While my daughters were waiting to be served, they figured out how to fold the napkins. Have a go. 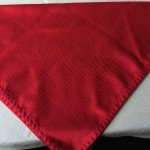 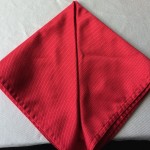 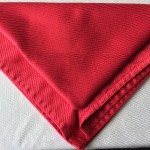 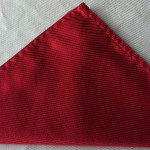 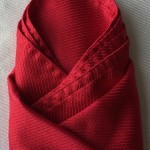 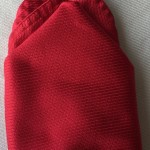 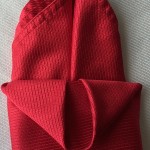 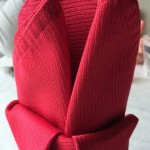 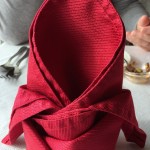 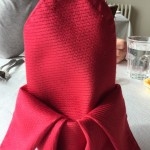 Our second outstanding meal occurred at the Gerdi Guesthouse in South East Iceland, which is just north of the beautiful Jokulsarlon Lagoon. It was a double birthday treat, so we ordered langoustine with blueberry Skyr for dessert. That’s a meal I’ll return to in memory as sensory bliss. 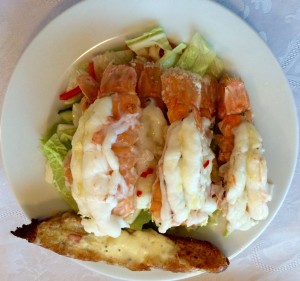 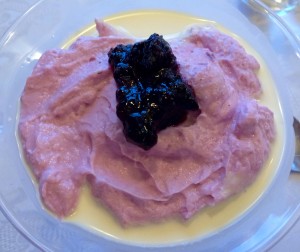 3. The “Taste of Iceland” dinner cruise

The third outstanding Icelandic food experience occurred on the “Taste of Iceland” dinner cruise by Iceland Seatours in the bays of the North Atlantic outside of Stykkisholmur. We watched as the seamen lowered an iron chain trap to the ocean floor and scooped up what was down there. When they raised it and emptied the contents onto a metal-lined trough, sponges, starfish, scallops, and sea urchins tumbled out. The crew swiftly cut open the scallop shells, scooped away the guts and served the single creamy nugget of scallop fresh on the half shell. The boat provided various condiments such as salt, pepper, wasabi, and soy sauce to flavor the ultra fresh seafood, but I preferred the almost sweet flavor of the scallops with nothing added. 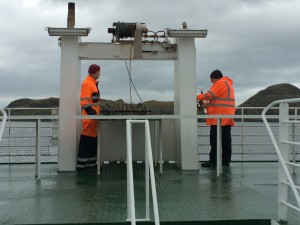 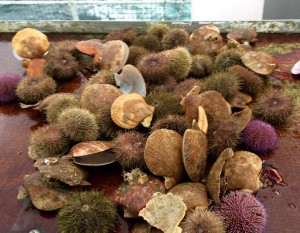 No fresher than this!

A young seaman then showed me how to find the small cashew-shaped edible interior of the sea urchin. He advised me to chew it very carefully to experience a kind of sweet after-taste. I did as instructed, and it was quite an amazing flavor. I wondered why he only opened the plain brownish urchins and not the beautiful purple. He said, “Purple puke.” I guess that explains it sufficiently.

I love seafood and had been told that fish stew was a staple of the diet and generally the cheapest item on the menu. Actually, fish stew was rarely on any of the menus I saw. Fish soup was, but sometimes it was very watered down. Several times I tried ordering meat soup with lamb as the base. The first time at One Stop, on unprepossessing little highway cafe near Laugurvatn, the soup tasted fine, but had the flavor of canned Progresso that I recognized from home.

The next time I ordered lamb soup was at the highly esteemed Settlement Centre Restaurant in Borgarnes. I was startled to recognize exactly the same flavor as the soup at One Stop. The vegetables were all chopped into regular little sizes with the potatoes taking on an almost transparent look that occurs with pressurized vegetables. I make homemade soup all the time and I know what fresh vegetables and herbs look and taste like in a soup. That’s not what we were served.

As I unhappily paid the $60 bill for three bowls of canned soup, the chef happened to walk by and asked us if we’d enjoyed our meal. I said, “Very disappointing,” which was not what he expected to hear. He assured us he had made the soup that day in his very own kitchen and he described how he pulled the meat from the bones himself. Well, he may have opened the can in his kitchen and passed a couple of pieces of boiled mutton through it very quickly, but my bet’s on Progresso. I didn’t say that to him, but if you go to the Settlement Center Restaurant in Borgarnes, try something else from the menu.

We shopped in the local grocery stores for a lot of our lunches and breakfasts, but don’t think that made the food cheap. Selfoss in South Iceland is the logical place on the Ring Road to stock up. We usually bought cheese and crackers, bread and pate, and various fruits. Most days we enjoyed at least one picnic lunch.

I’ll long remember the warm sunshine on my back and the cold breeze on my face as we lunched outdoors on the weathered tables in front of the Skaftafell Glacier visitor’s center. That day we enjoyed pesto on seedy bread with tuna, washed down with liters of glacier water. Tinned Icelandic tuna is much finer in texture and very pink compared to what we buy in America.

By the way, if you’re tempted to buy Icelandic candy, RESIST. It has to be the nastiest stuff ever invented. Here’s a picture of one candy bar to avoid — there are many others. 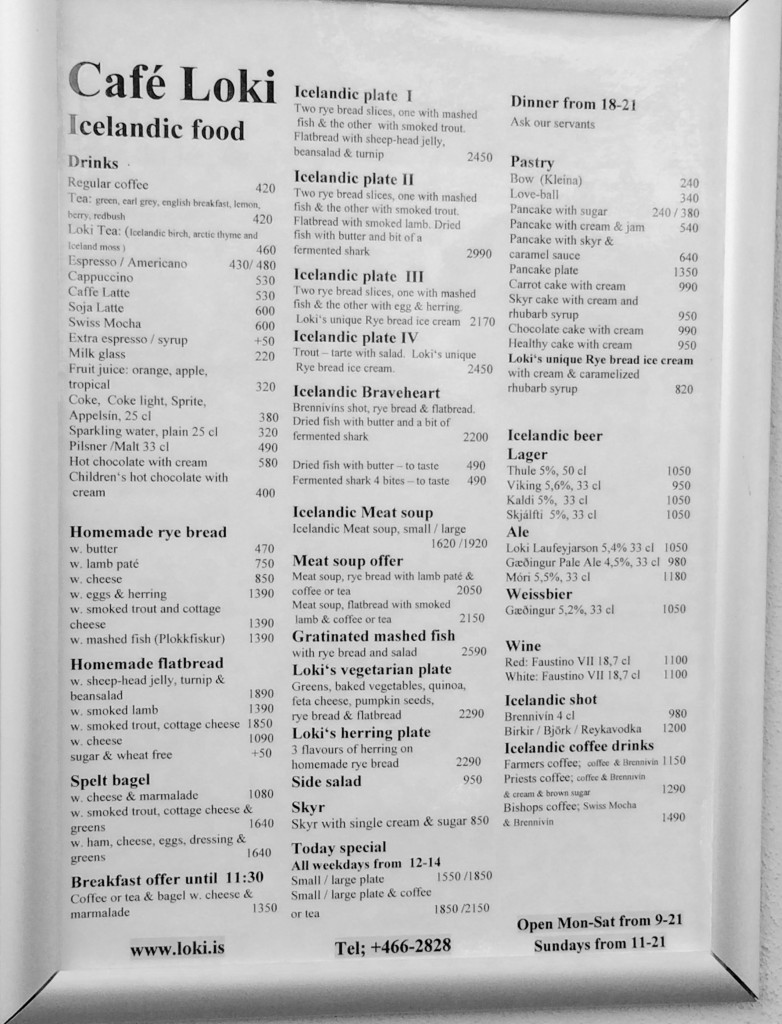 Several restaurants offered hakurl (putrid shark), on the menu. Our first opportunity to sample this delicacy was at the Loki Cafe beside the Hallgrimskirkja in Reykjavik, as you can see from this menu. But we’d seen a lot of people wretching on YouTube after sampling it, and decided we’d be daring in our choice of cuisine in some other way.

Oh, and by the way, if you rent a room in a Bed and Breakfast in Iceland, it almost always means there’s a Bed, but No Breakfast unless you pay another ten or fifteen dollars.