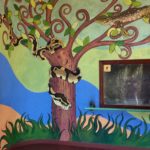 Love animals? Visit Parque Zoologico Nacional in Santo Domingo. We arrived at opening time on a Saturday morning under intense tropical sunlight. I knew the photography would be difficult, as this photo of the entry courtyard suggests. But I prefer seeing the animals first thing in the morning before the drowse of a warm day sets in. The entry fee was very modest—150 pesos (about $3 US—and we were handed a full color map of the zoo, which I appreciated. 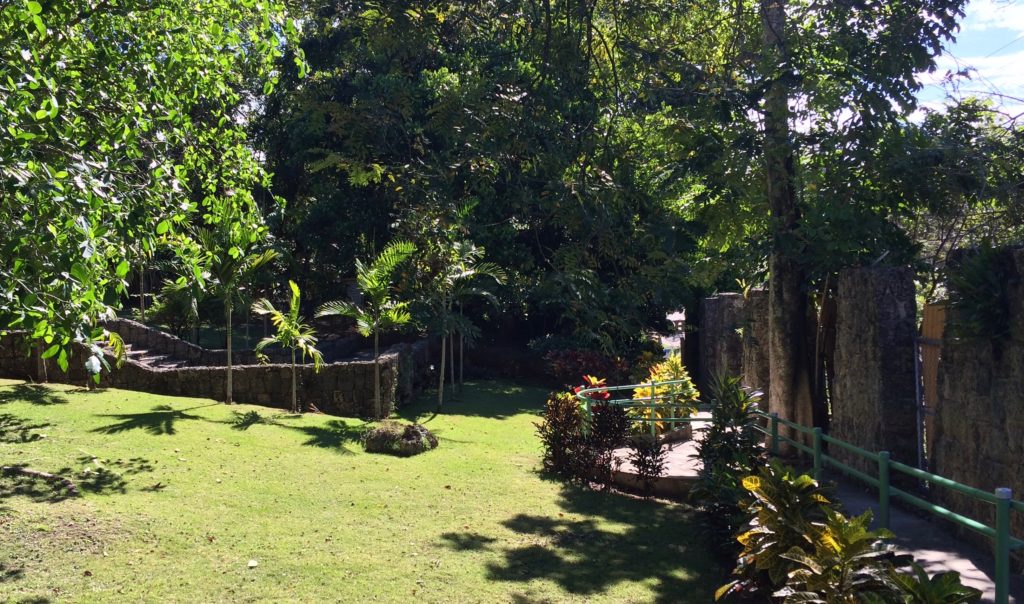 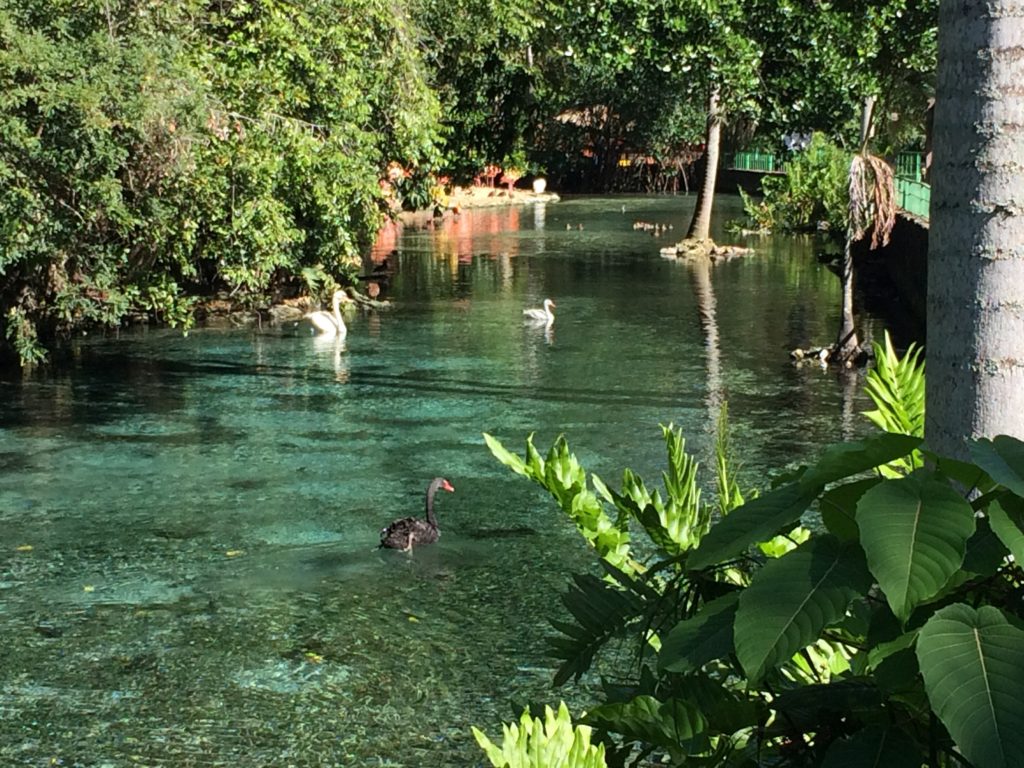 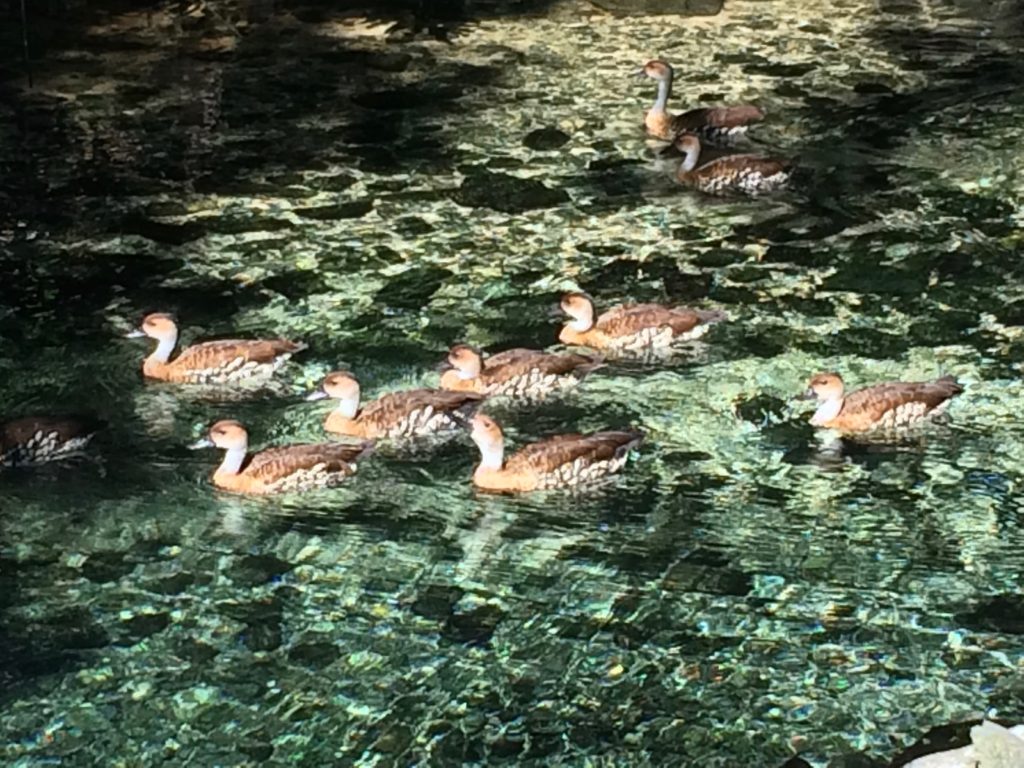 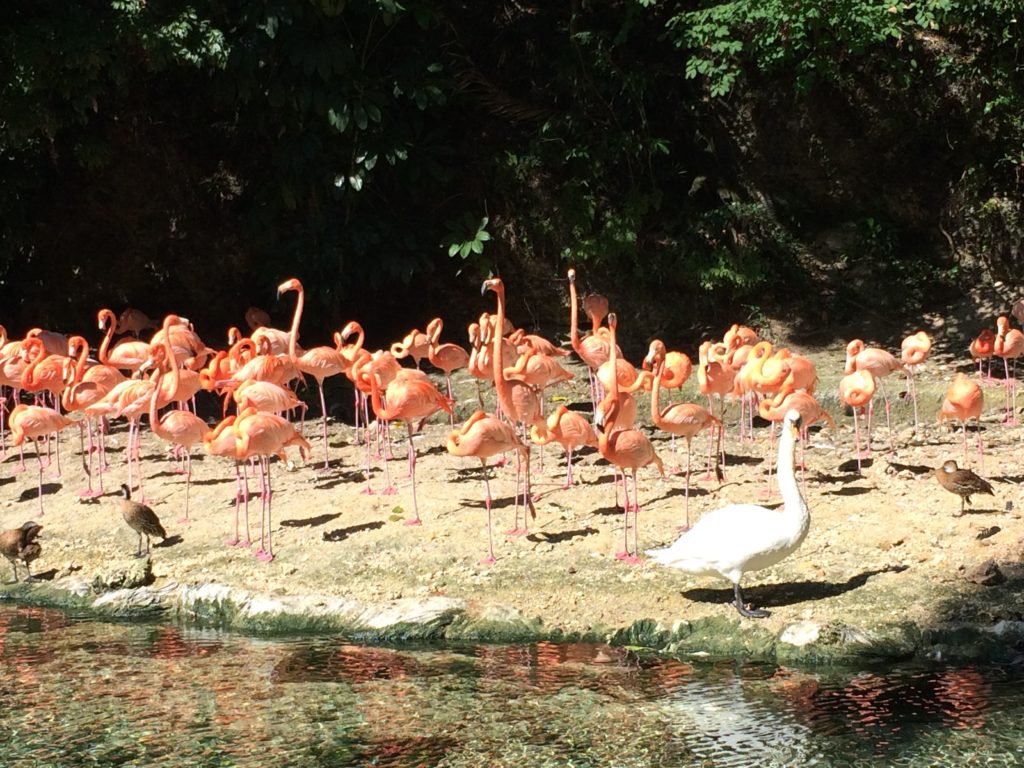 Our first impression of the grounds was its cleanliness. Look at the water in this stream. The rocks underneath show so clearly that they create patterns equally as vibrant as the waterfowl swimming on top of the water. It amused me to see the flamingos raise their heads on their long necks and all focus directly on the children playing by the fence. I didn’t see anything in the children’s behavior that would garner such attention, but when the majority of the flock did it, they looked like a bunch of upside down exclamation marks.

Tram with conductor and guide 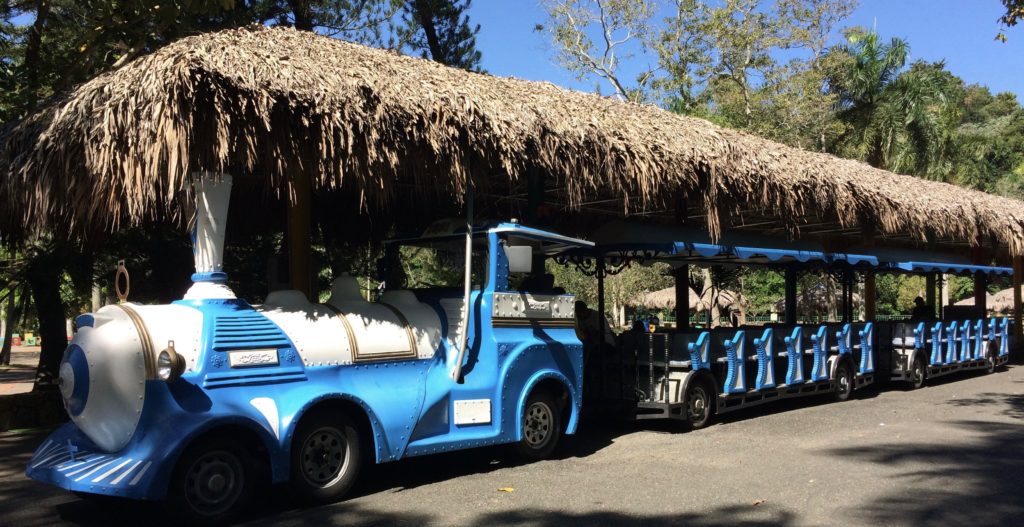 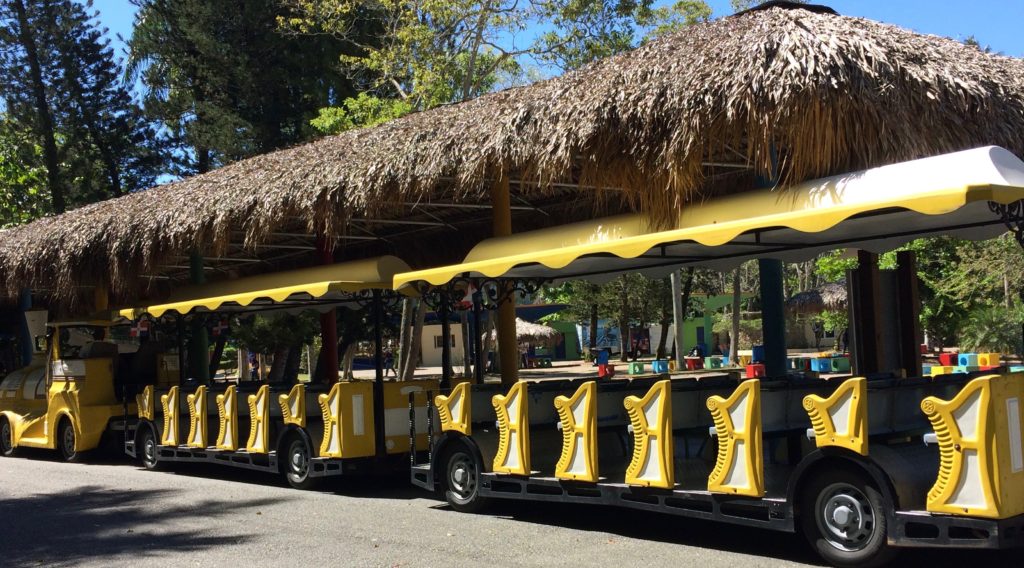 On the hour, the whistle from the tram sounded and all the families clambered aboard. Each train, painted in a primary color, was clean and new, which added to the pleasure of the experience. As it turned out, the zoo has a rather large footprint compared to the number of animals it houses, and the only way of seeing it comfortably, would be from the tram. I’d hate to have to walk it. That said, the train “conductor” drove us very rapidly from one place to the next, which made photography really difficult. 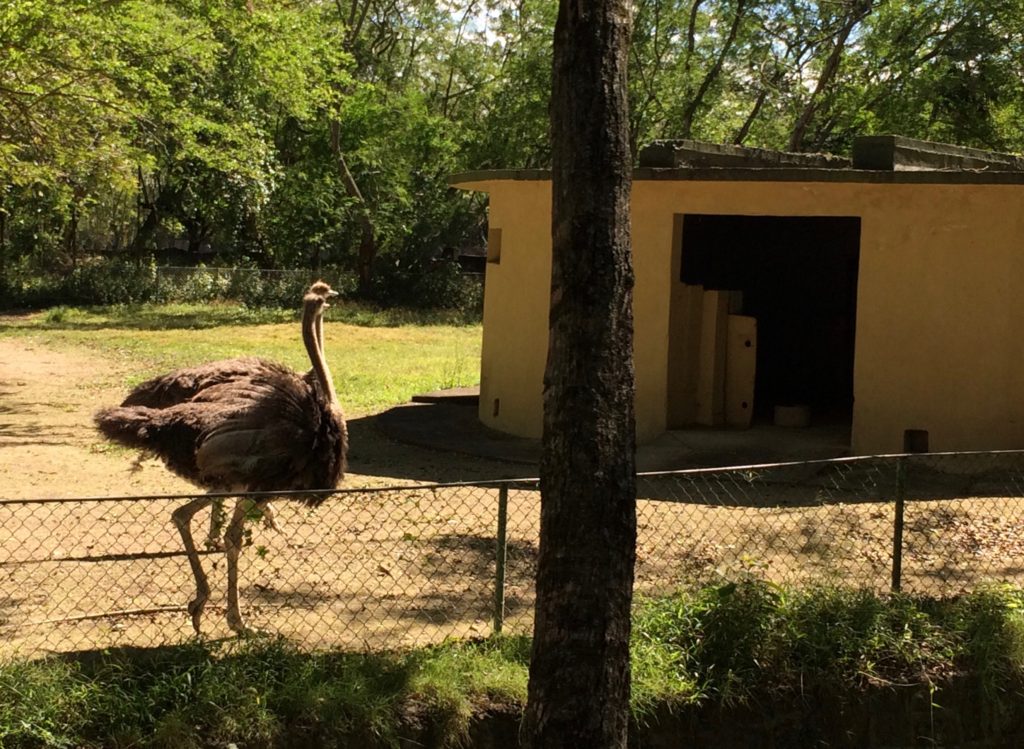 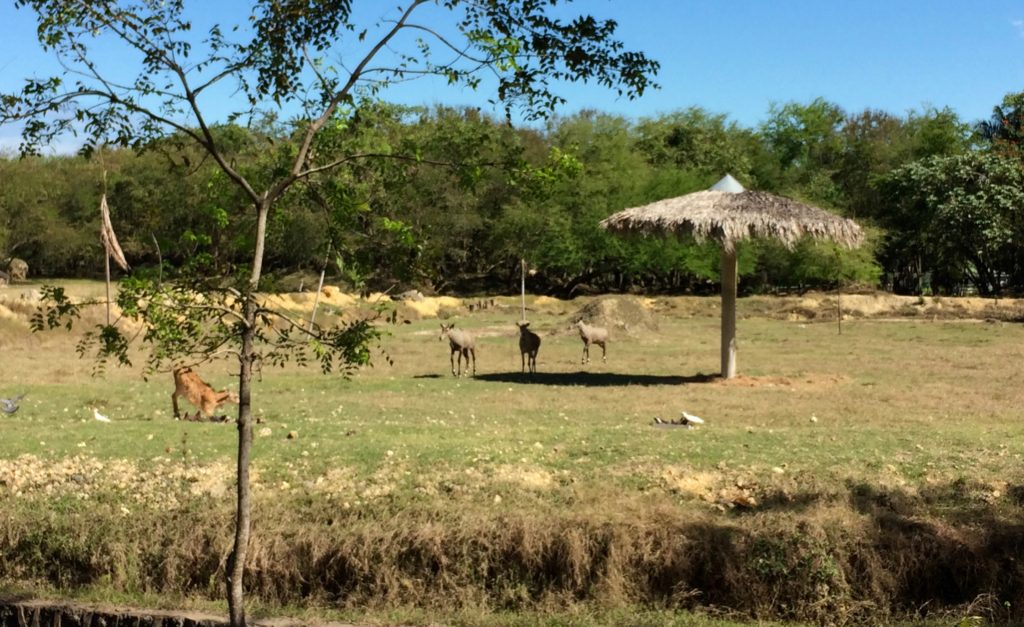 The first paddocks were spacious, housing ostriches and large mammals. I was very glad the American bison were carefully cordoned by a deep rock-lined ditch. A family friend was gored to death by one on a relative’s ranch in Alberta, Canada, and I have no illusions about any apparent docility. 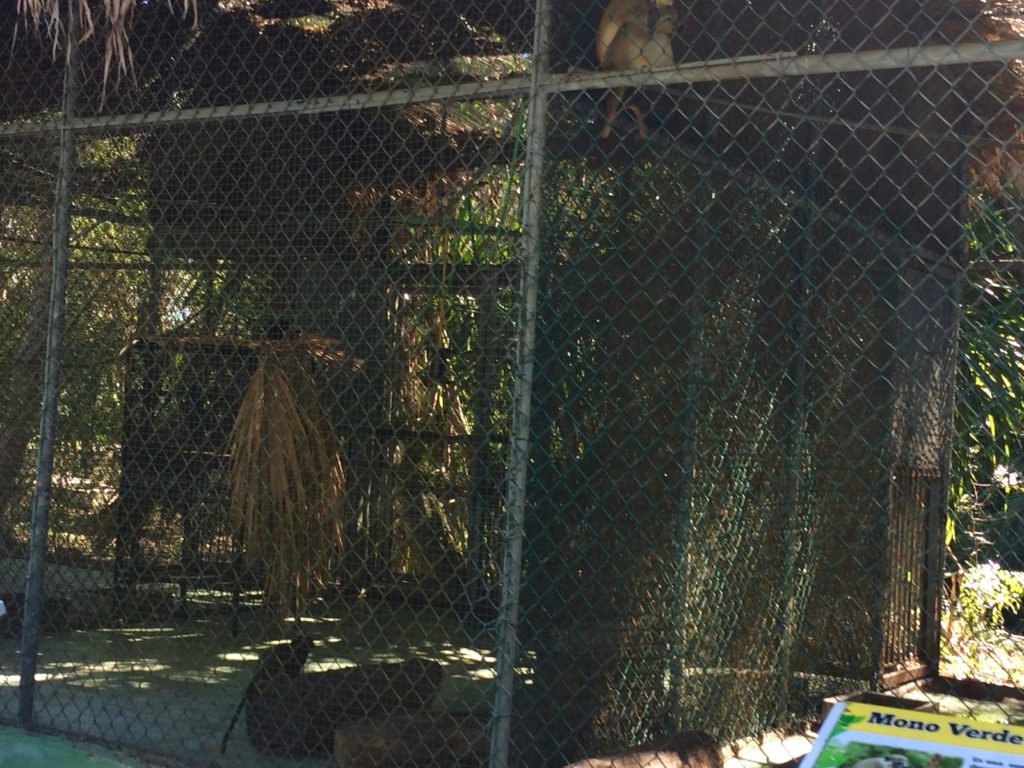 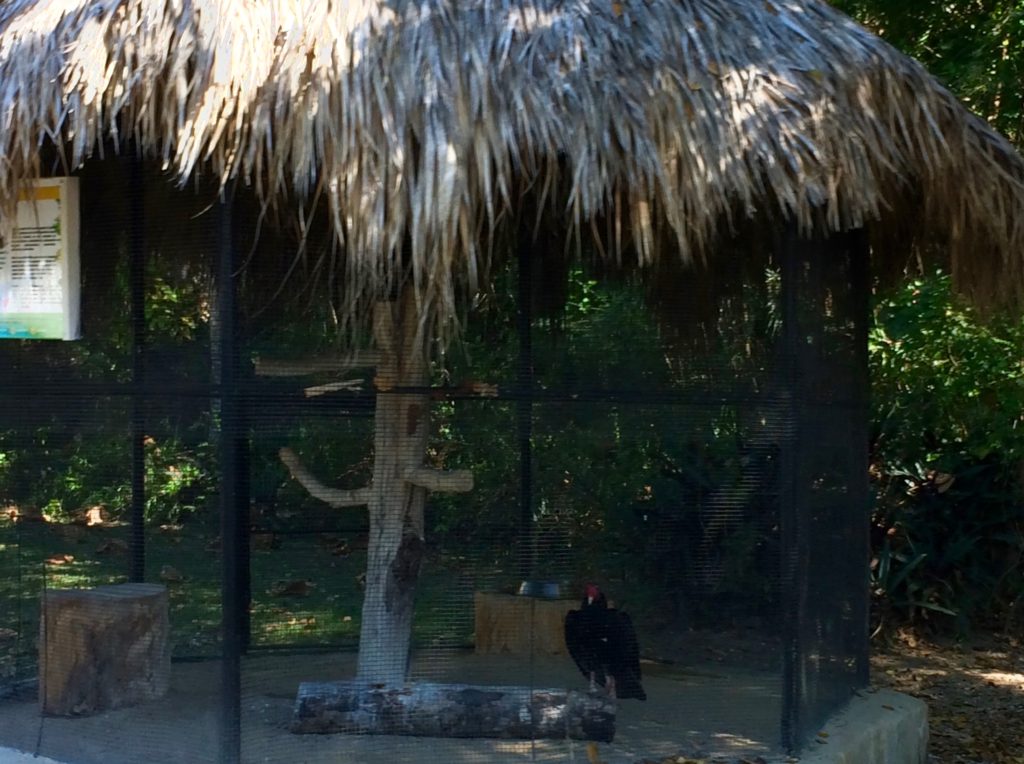 I’m not sure what the guide said when we came to the monkey cages, since the tour was in Spanish, but the entire train shouted at them. I vacillated between wishing the patrons had respected the quiet of a caged animal’s existence, and enjoying the passenger’s exuberant response to encountering favorite animals. We had seen such large enclosures to this point, that I was very surprised by the old-school approach to the monkeys. The cages were so small and dark that it was very difficult to even see the animals inside. The same thing was true of the bird cages near the end of the tour.

Rhythm of the thatched roofs

Rhythm of the Thatched Roofs 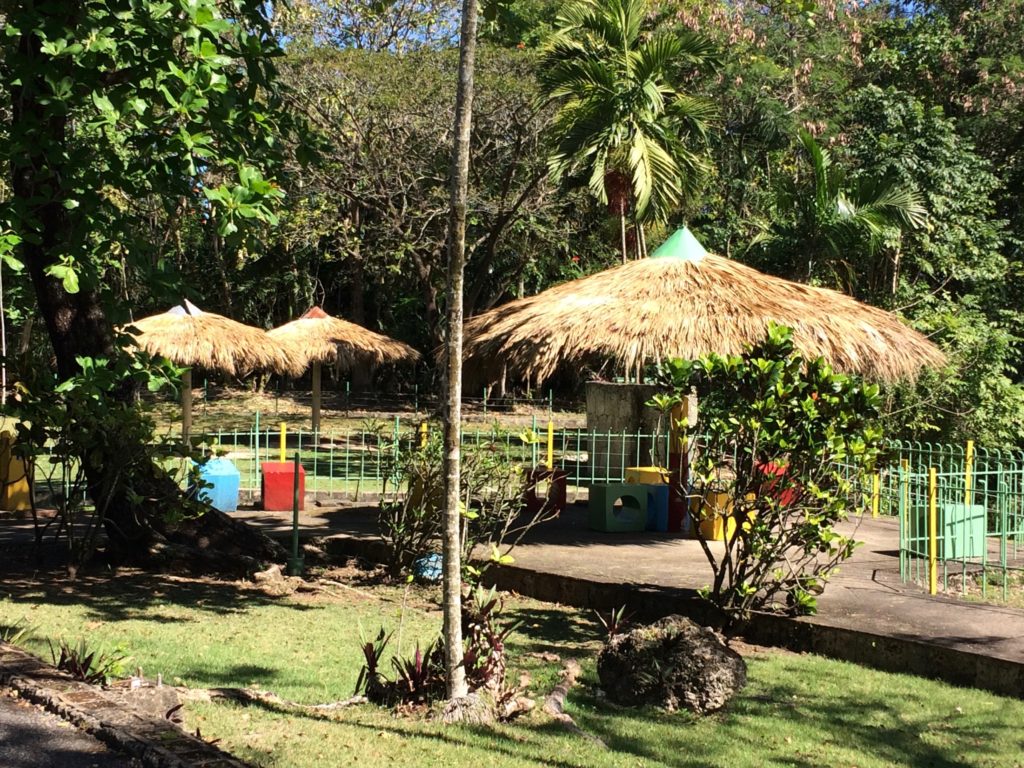 Shade for animals and patrons 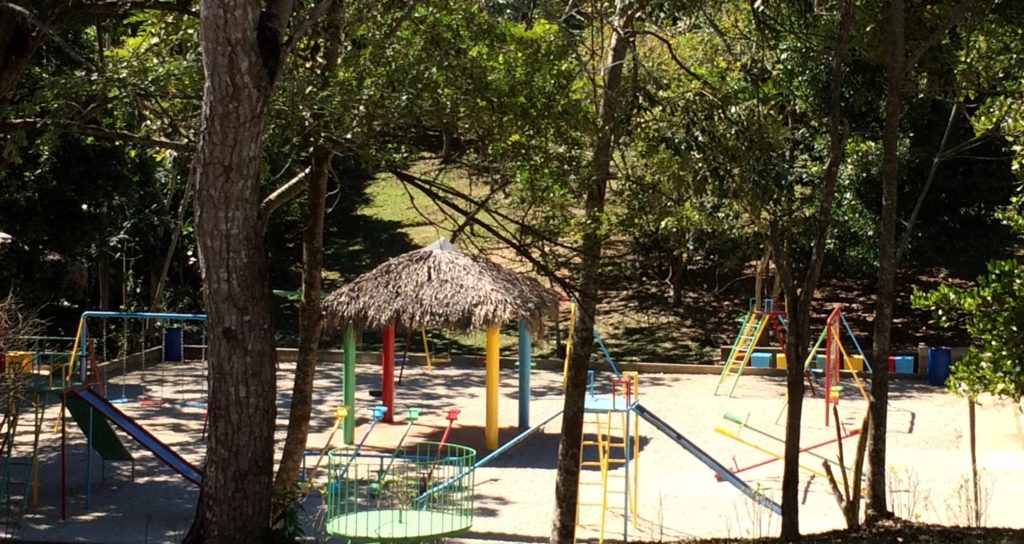 Throughout the zoo, thatched roofs provided shade for both visitors and animals, and I enjoyed the rhythm of that repeated element in the zoo experience. A lovely little playground area for children was situated just before we reached the main stop on the tram route, but nobody was using it yet on that early Saturday morning. 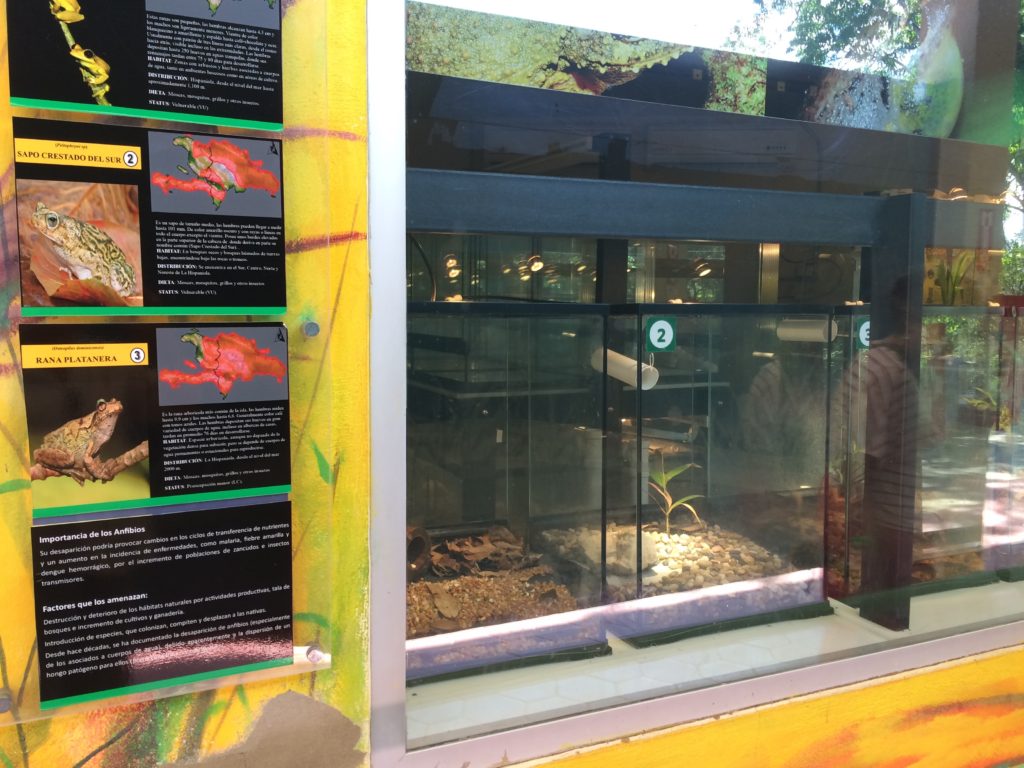 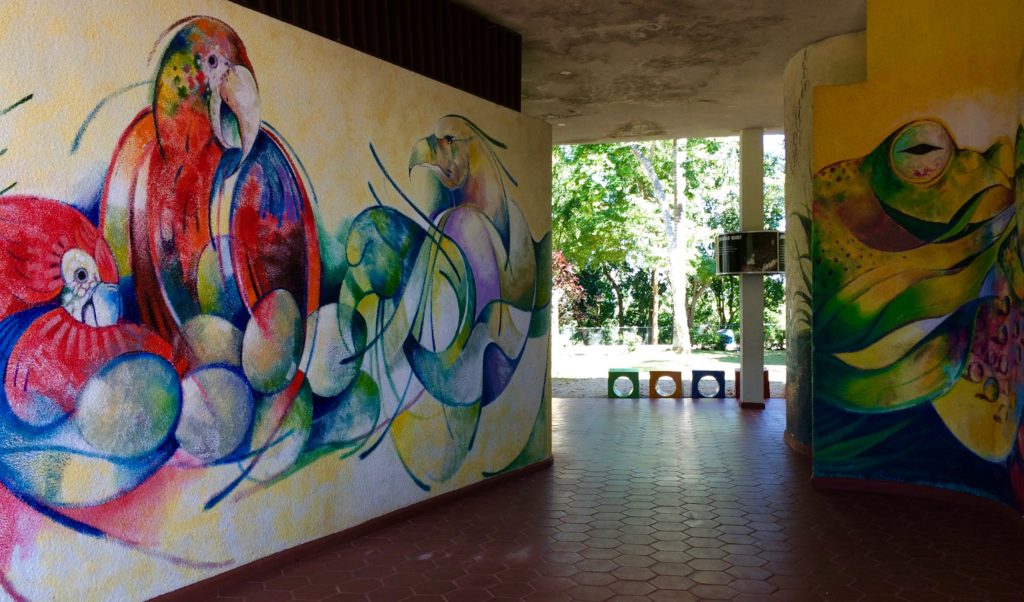 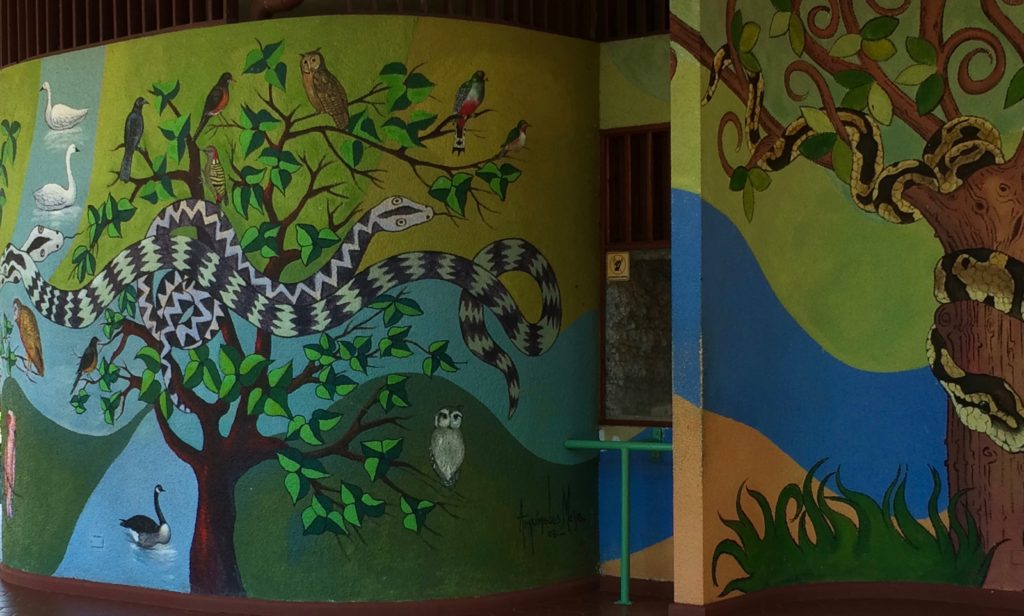 Mural for the reptile cages 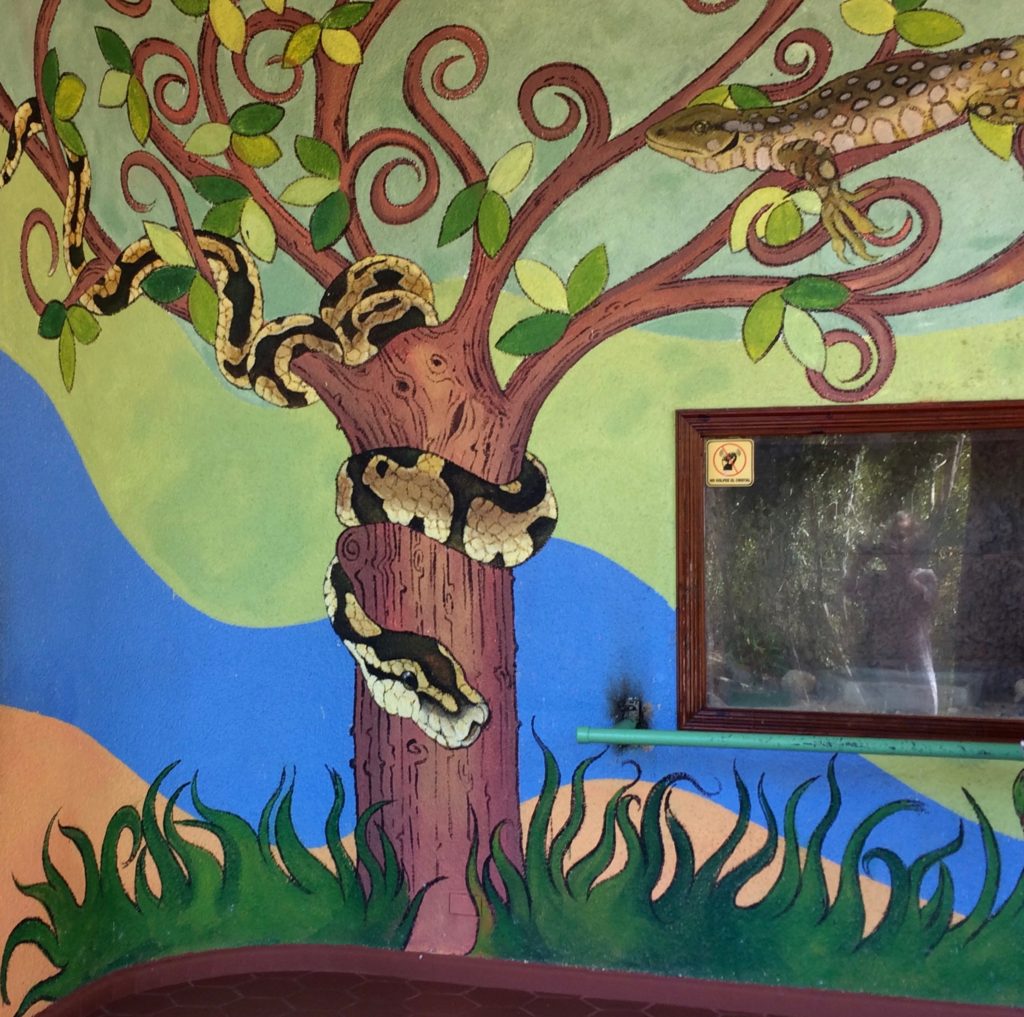 All the passengers disembarked to view the snakes and lizards up close. The colourful murals were very different from the natural habitat tones of the enclosures we’d been seeing, and I liked having the bright backdrop. Again, everything was spotlessly clean. Sometimes a zoo can be odor-laden, particularly in certain areas, but the Parque Zoologico Nacional in Santo Domingo had none of that problem.

When we returned to the flamingos before leaving the park, they’d just been fed. Listen to what they have to say about things!

By they way, if you loved the zoo, I think you’ll love the Botanical Gardens.