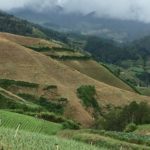 In a country where stereotypes ring true to the rest of the world, what we lost and found in Constanza gave me another lens for knowing this island. I’m not talking about potatoes and a waterfall, although both figured in our visit. But if you think that palm trees waving over white sand beaches are the only parts of the Dominican Republic worth mentioning, lose that notion.

We left Santo Domingo via the new circumlocution road, thus by-passing the traffic and congestion of the city, and headed north on highway #1 toward the middle part of the island. The turn onto highway #12 toward the western mountains took us onto a winding road in hilly country. Mostly the road had guard rails on the outer edges, but past them we viewed precipitous drops into narrow valleys below. Every inch of the landscape was swathed in ferns and shrubs, however, creating a sense of gentle undulation. 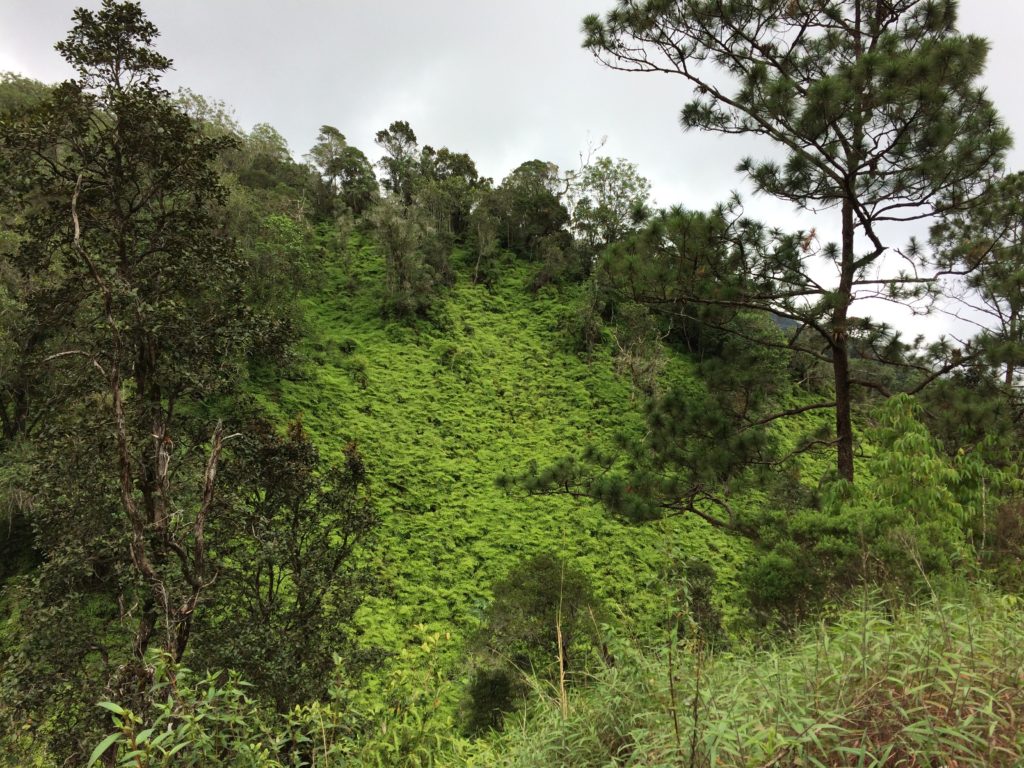 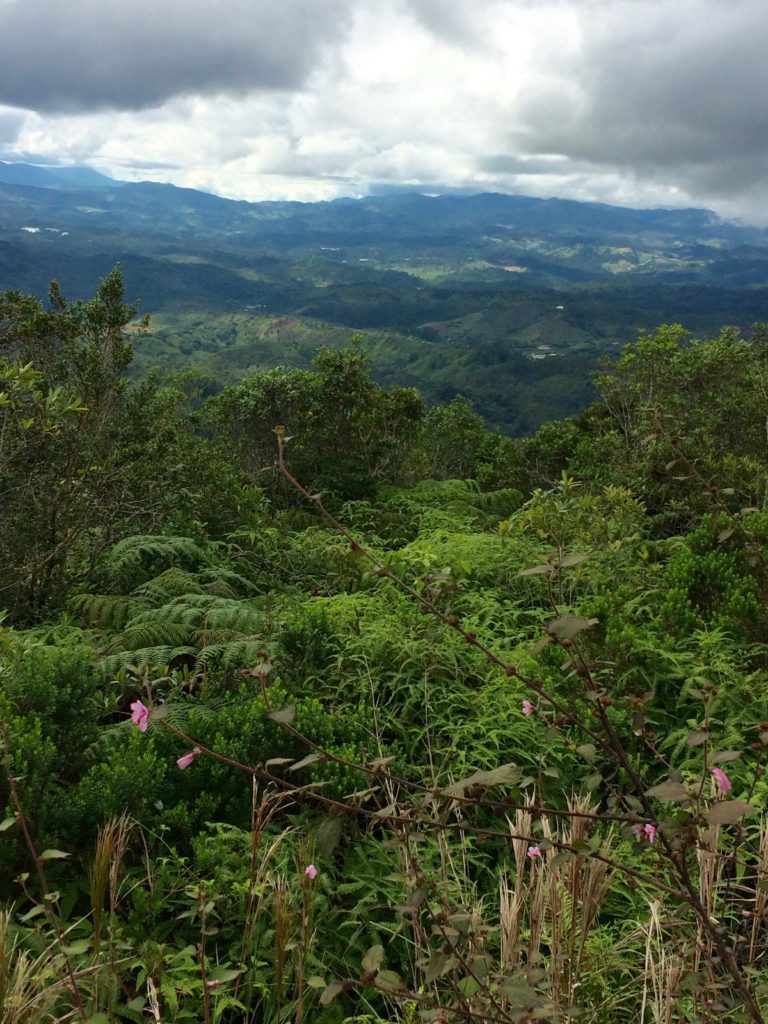 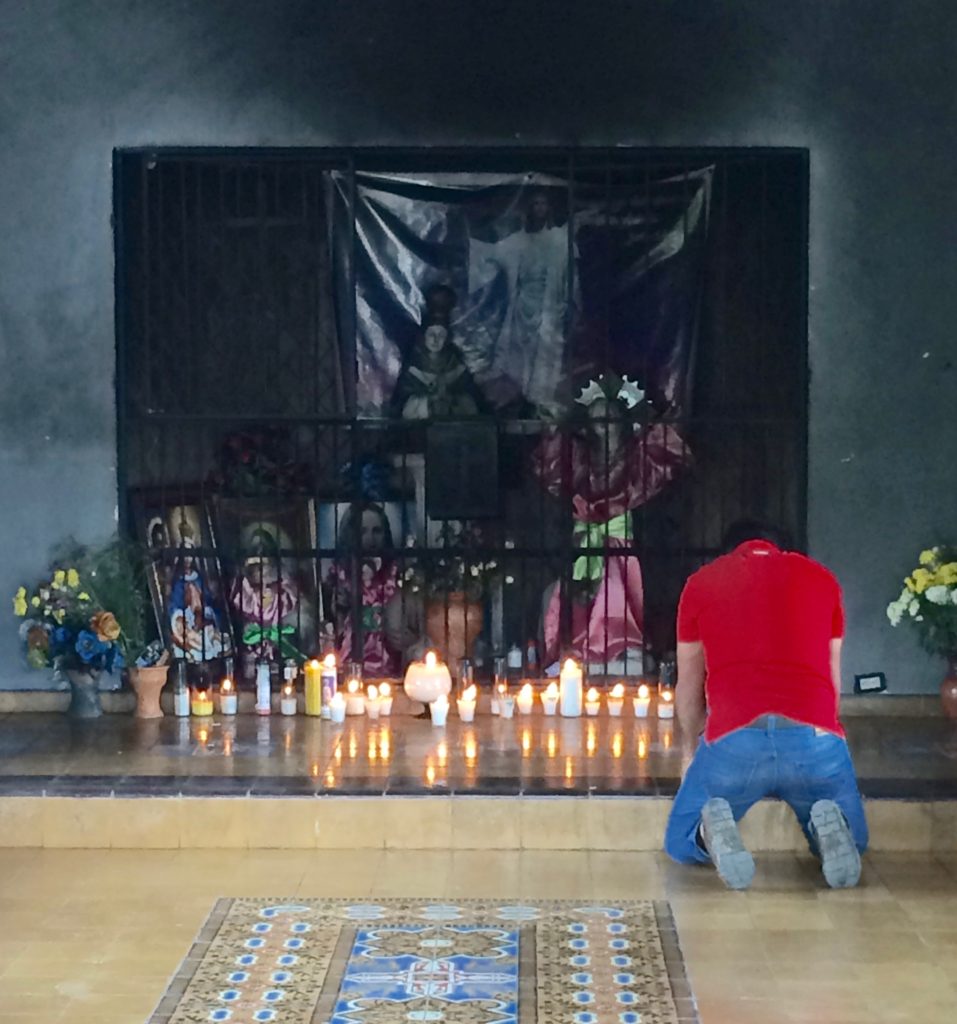 The shrine at the top of the hill

At the very top we discovered three important monuments for traveler comfort. One, a covered gazebo for viewing the panorama before us. Two, a hovel with a privy and no running water, but with a kind-faced attendant highly vigilant in mopping the white tiled floor after each patron. And three, a shrine to the virgin with a candy bar stand just outside.

View from the top (with incoming object)

The panorama shot is always the favorite photo for such an opportunity. Here’s mine. I thought of photo-shopping out the unidentified flying object in the sky left of center. A bird? A plane? An incoming missile? A hopeful mosquito? Whatever it was signifies a unique moment in time, so I guess it gets to stay.

Candied peanuts in hand, we drove through mists across the valley toward the mountains on the far side, hoping to reach Salto Aguas Blancas when the light was right. The Constanza valley comprises rich farmland which produces crops of vegetables to feed the entire island. The soil is deep and rich, even on the hillside terraces. November is the season for the potato and bean harvest, so the light dots on the hillside are huge bags of potatoes. 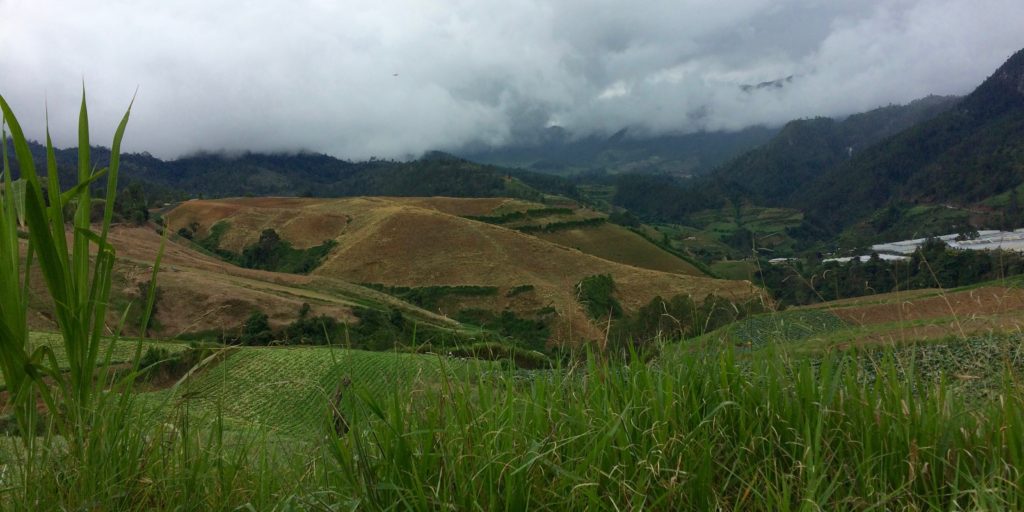 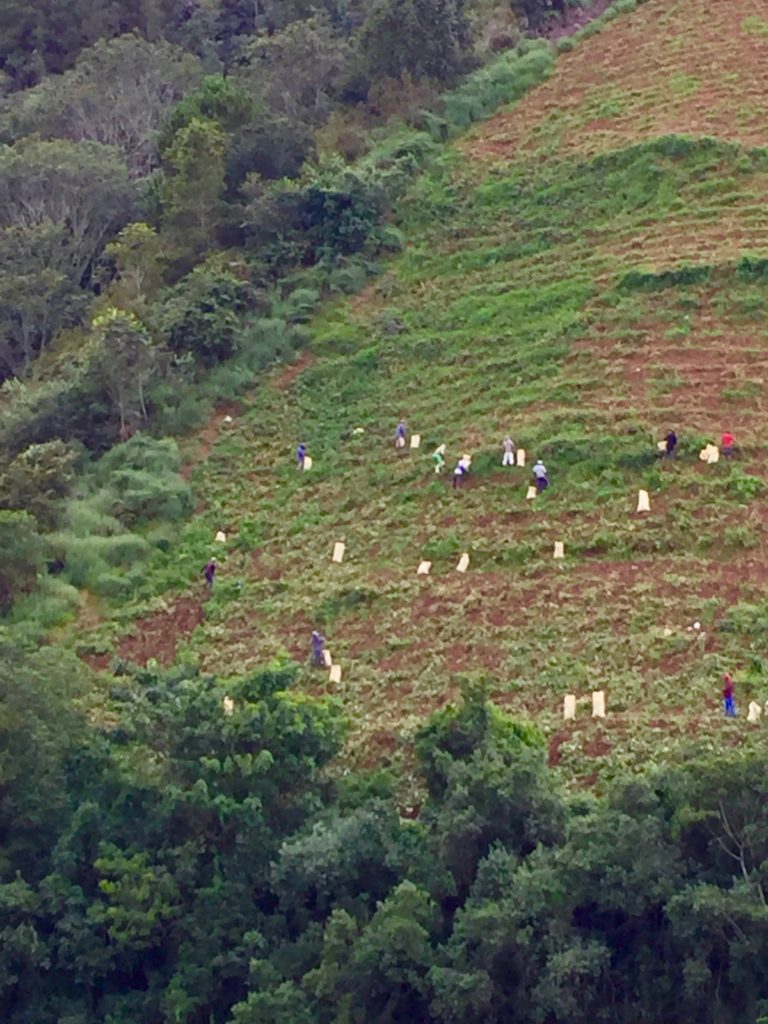 The valley mist turned to rain shortly after we left the pavement for the winding dirt road. During our six-mile slog up increasingly slippery mountain roads into Valle Nuevo National Park, our 4WD labored through ruts and skidded in the ponding water. Signs of recent road washouts grew more ominous in widening gullies carving through the road edge and on down the hillsides.

Around the next curve we discovered another little road-side shrine. It struck me as more predictive than comforting, sort of like “Pray here, all ye who drive this way!” 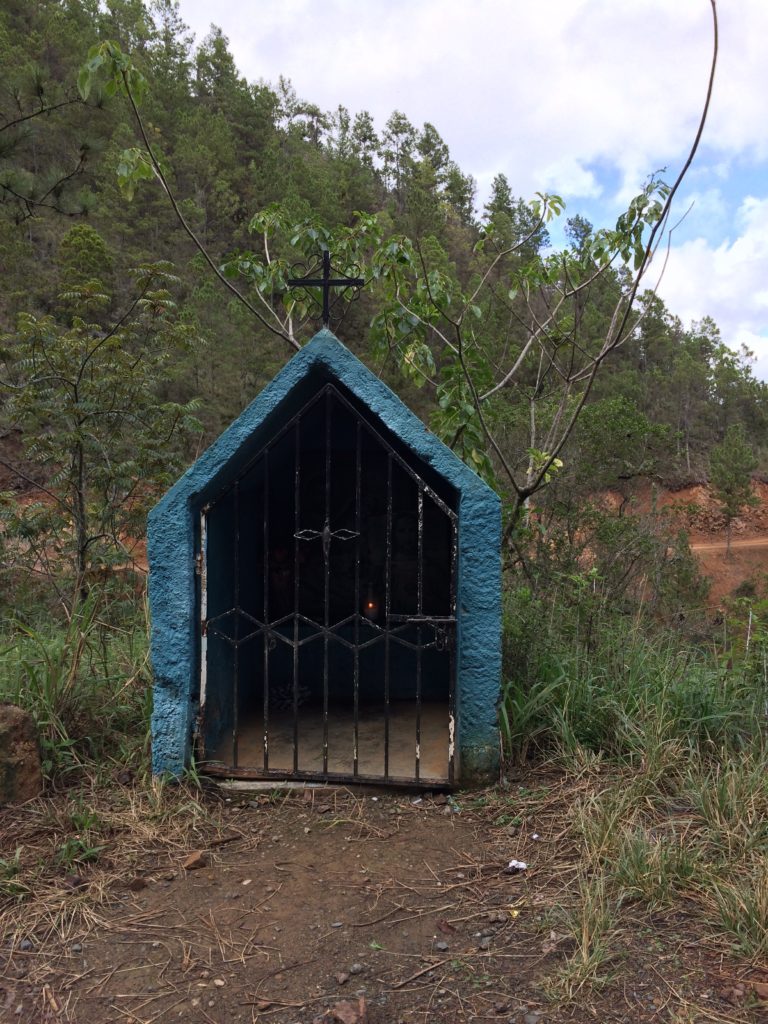 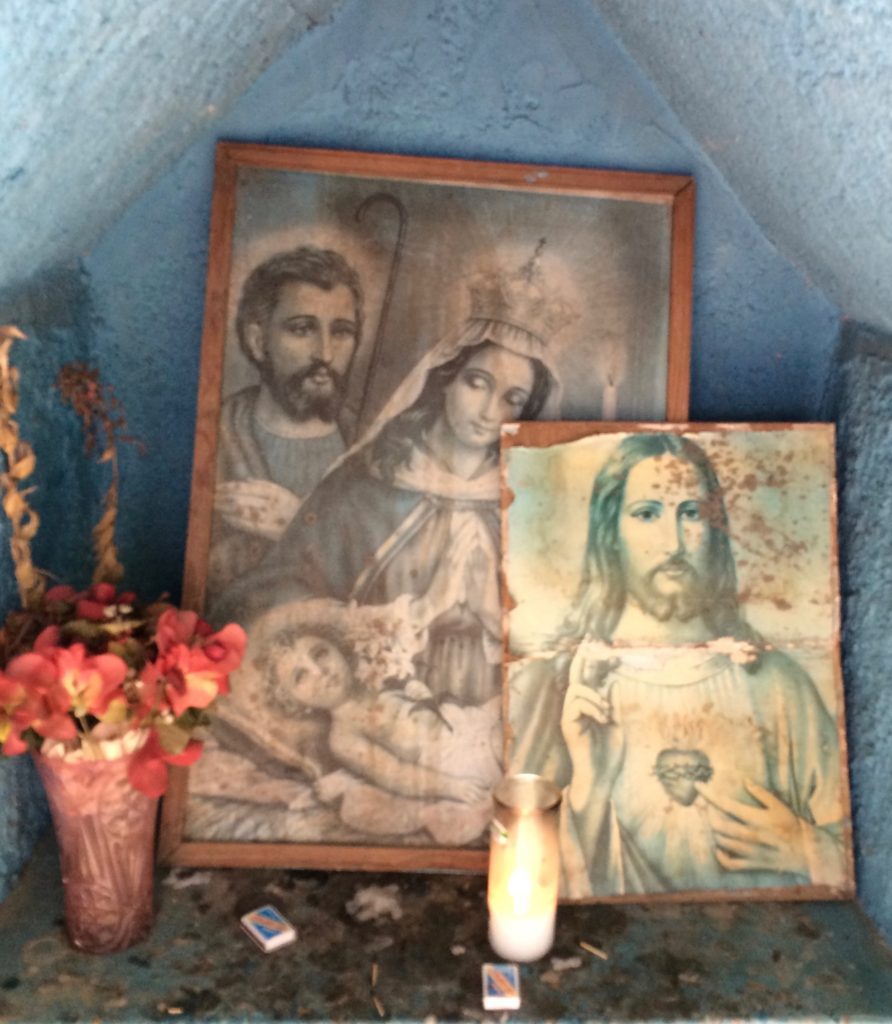 Inside the roadside shrine 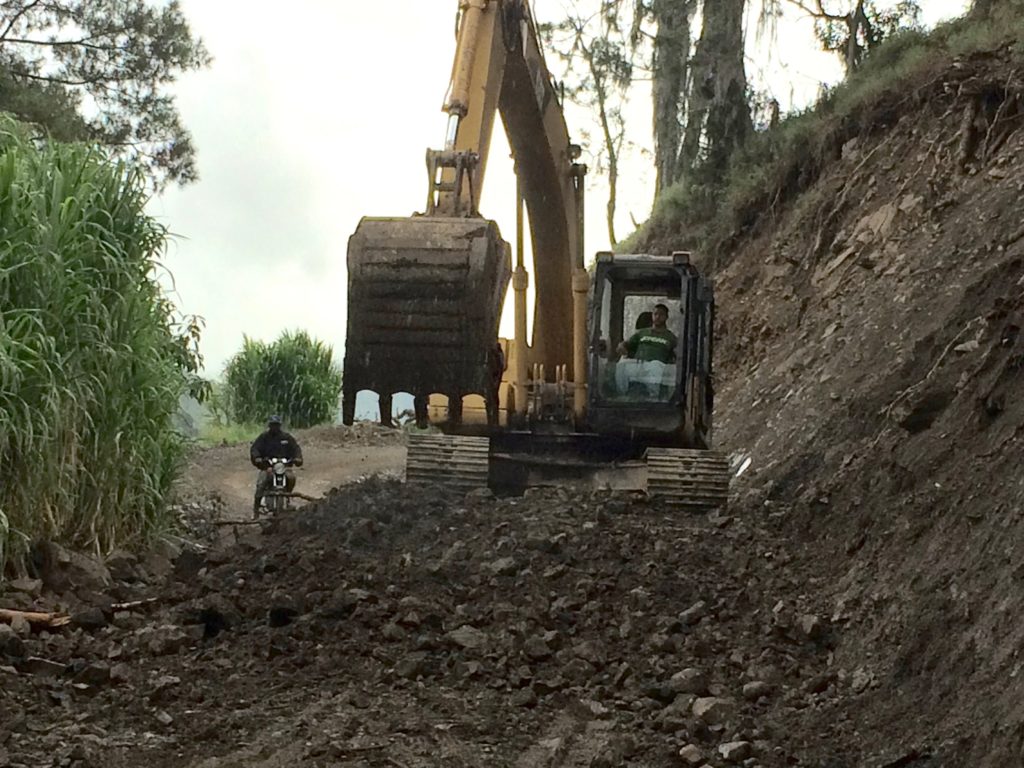 Soon a massive slide blocked the road. Several dump trucks hauled away the rock, mud, and downed trees. The driver of the large yellow Cat perched on top of the rock pile told us he’d get us through and began tamping down the mound to a size our 4WD could navigate. We crossed, tires and oil pan intact.

The further we drove, the more it rained. Finally, the road became impassable. We’d seen glimpses of Aguas Blancas through the trees just around the next curve. But even if we had slogged through the mud in our runners to get there, the rain would have made photography impossible.

Imagine backing up a big 4WD on a slippery mountain road barely the width of two vehicles, with a drop-off inches away. I wanted to bail, but jumping out of a moving vehicle seemed . . . Driving back down the mountain changed the angle of the vehicle enough so that the rear end graded the road from time to time. We’d slide into a hole with a jarring bump and grind that sounded like it had torn out the undercarriage. But no warning lights came on the dashboard. The oil gauge said we were fine and the tires were still inflated, so we drove on. 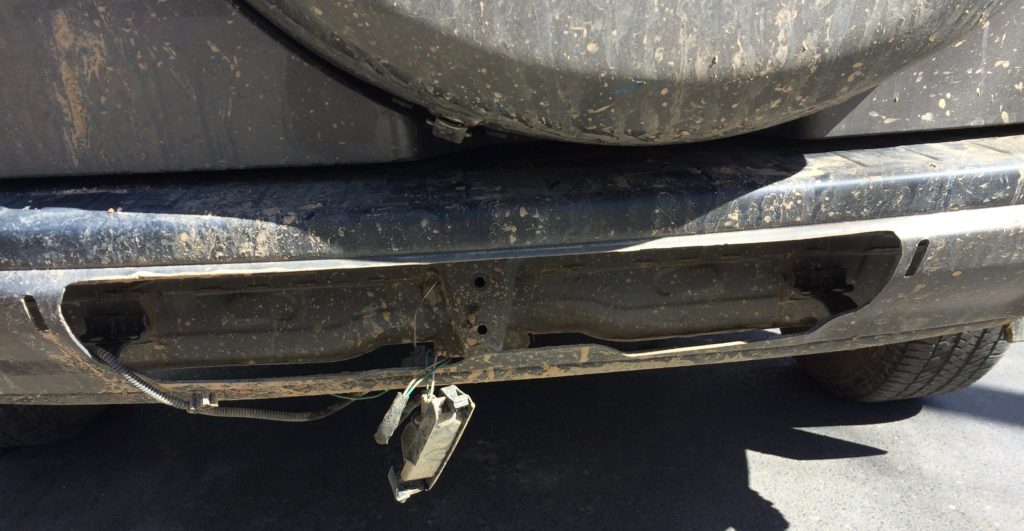 We didn’t discover that some rocky outcropping had torn off our license plate along with its light and the plastic part that holds it onto the car until we reached Constanza. A big empty gap back there. 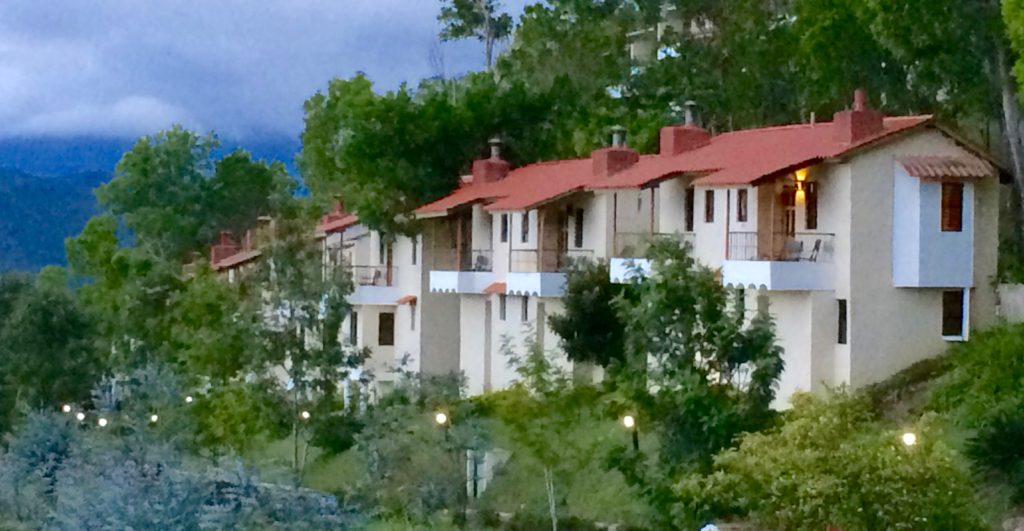 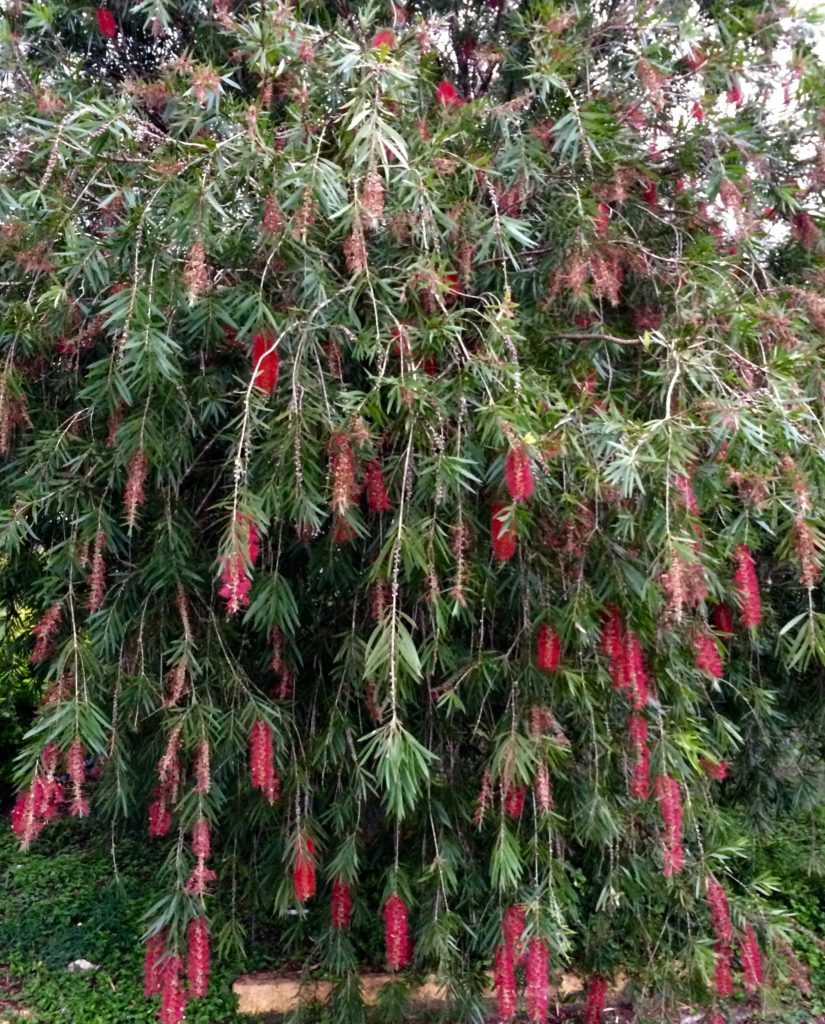 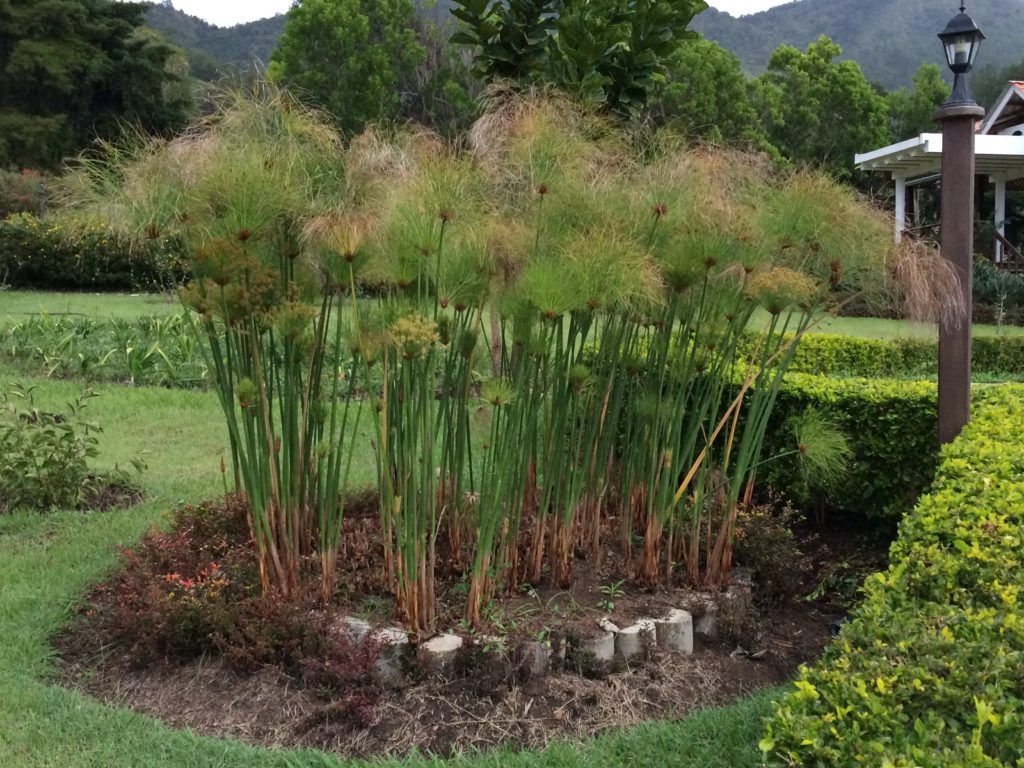 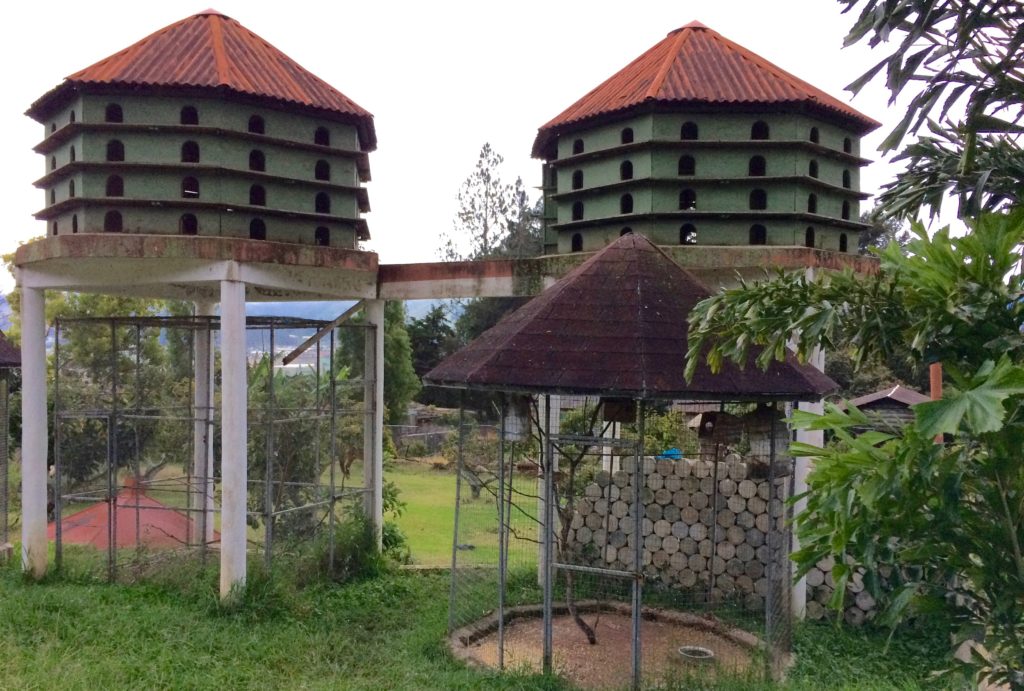 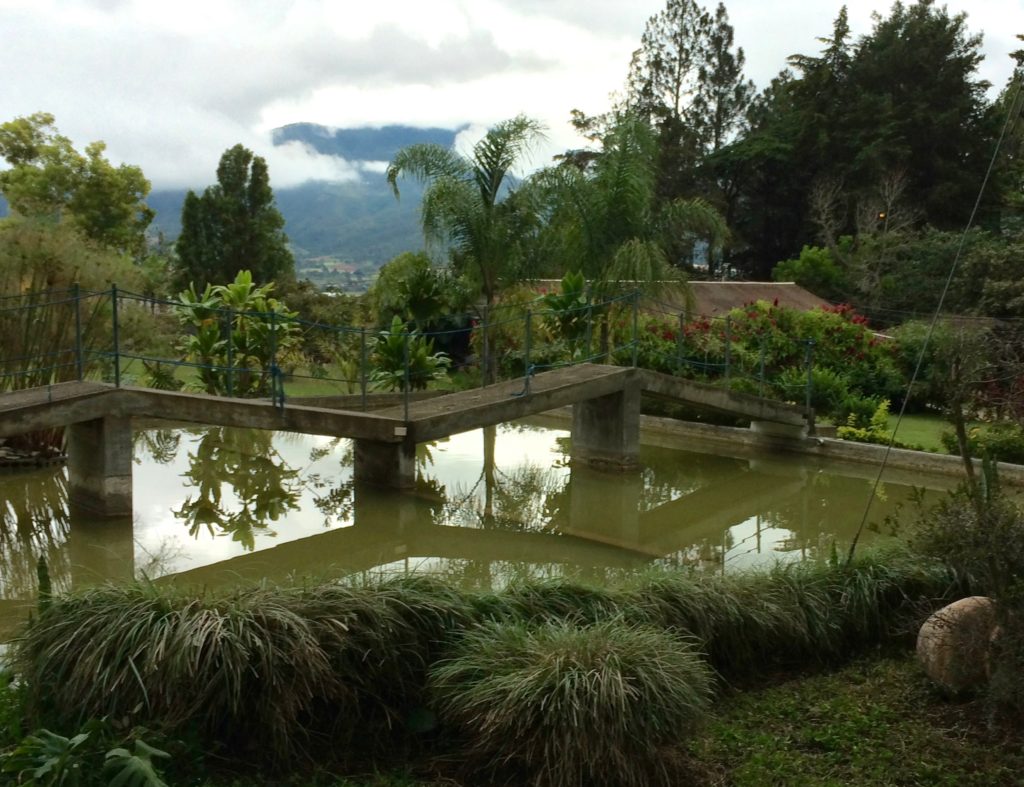 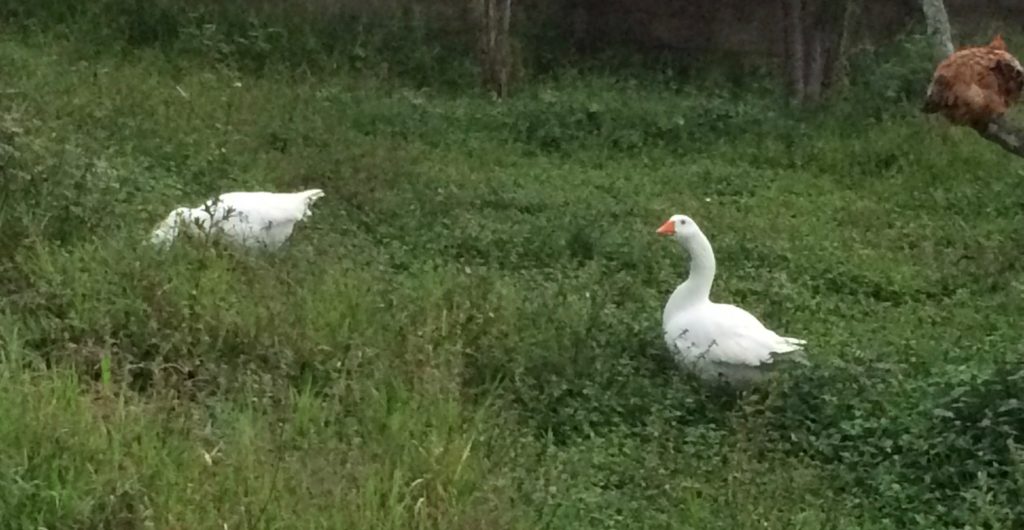 Grazing geese and a roosting chicken

An evening at Altocerras Villas

By contrast, we thoroughly enjoyed relaxing at Altocerras Villas, which consists of a series of red-roofed cottages that cut across a hillside. The beautifully groomed grounds held several large garden-to-table vegetable plots justifying its claim as an eco-hotel. In addition we saw extensive birdcage, dove cotes, chickens, geese, and even a grazing horse who seemed to function as a self-operating lawnmower. The campground is beautifully sited above the villas on a green lawn. A child-size zip-line overhead was undergoing repairs when we were there. 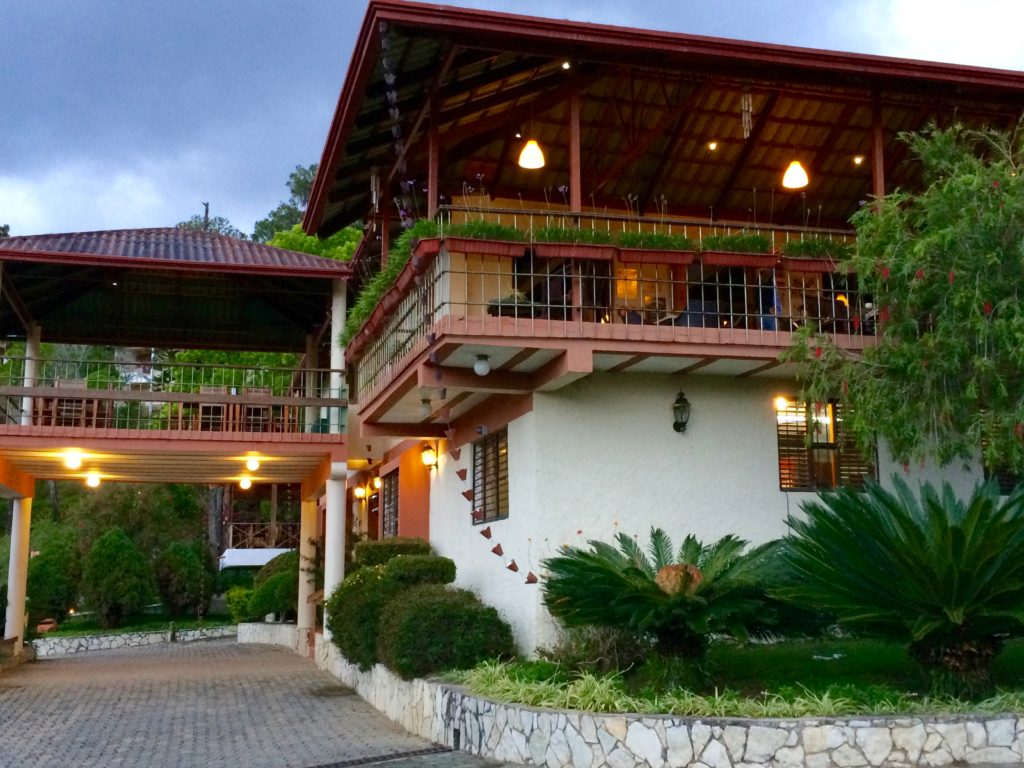 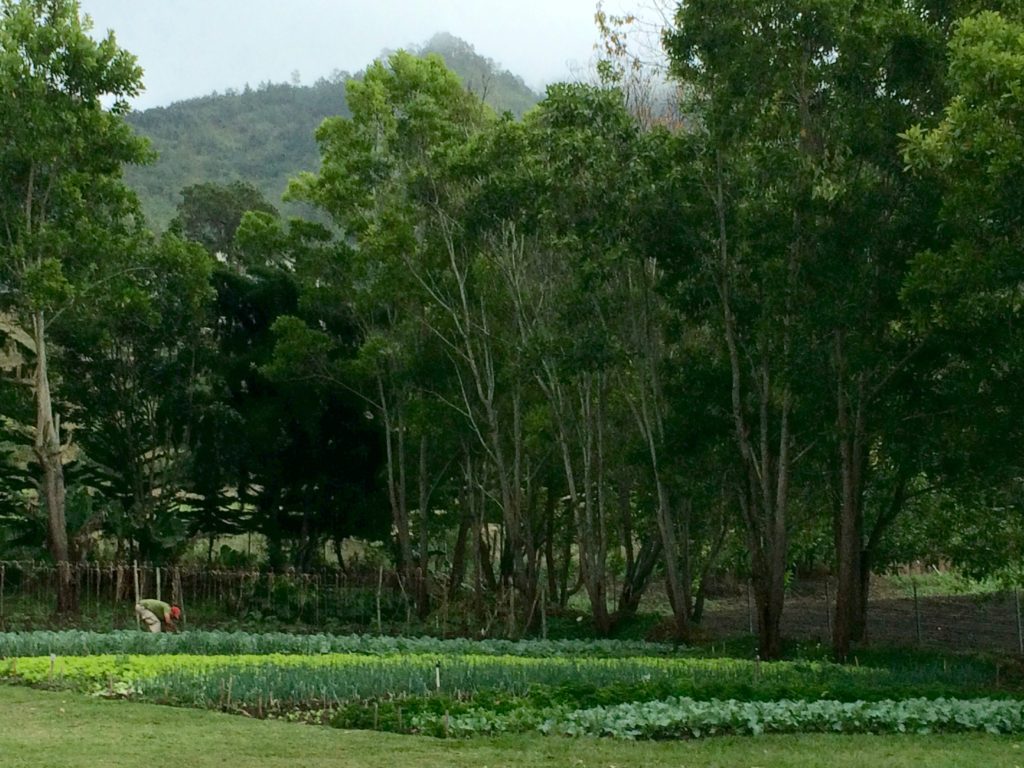 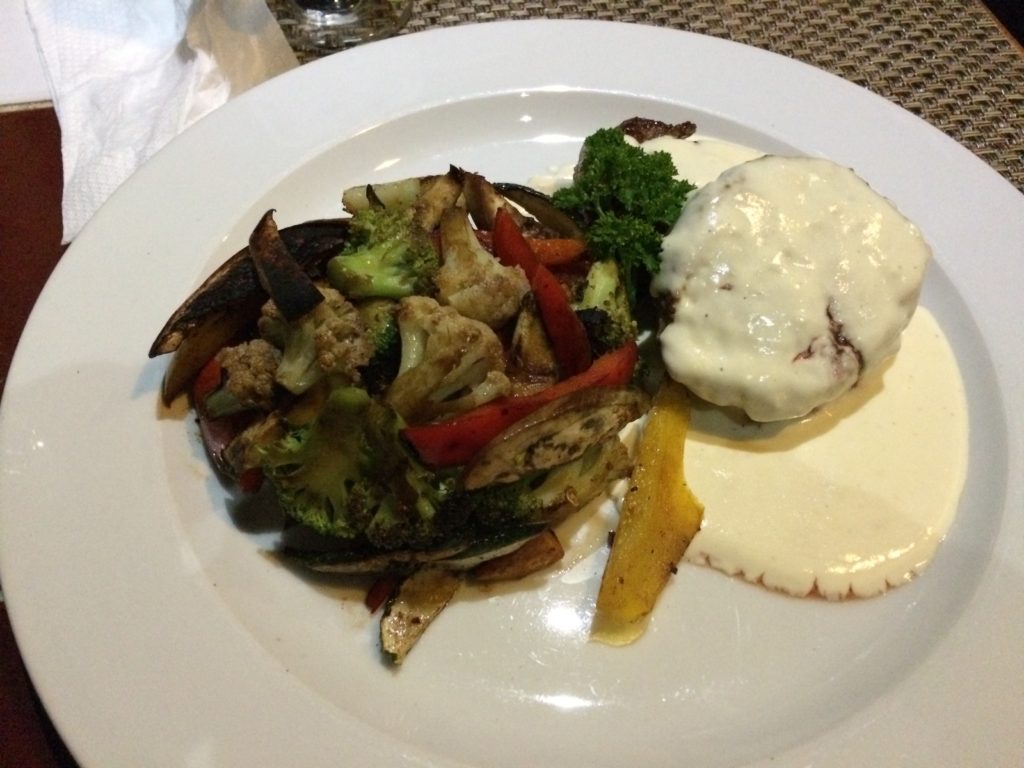 We sat in the outdoor section of the restaurant for dinner. You could order anything you wanted, but the staff pretty much served what was available. Well, we were visiting off-season on a misty Monday night and what they did serve was fairly tasty, so we let our preferences evaporate.

As we walked to our rooms, the rain began in earnest. Inside, while viewing the photographs of professional photographer Jon Fuller, the sound of rain on the tin roof was so loud we had to shout to the person next to us. Loved it. After being over-heated for months, the cool tile floors felt wonderful on our bare feet. Most importantly the bed felt dry and cozy.

But what were we going to do about the hole where the license plate was supposed to be? Find the answers in next week’s Lost and Found in Constanza Part Two.