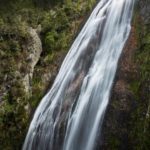 For one thing, we were told that staying overnight in Constanza wasn’t a good idea as there were no good accommodations. This is definitely incorrect information. 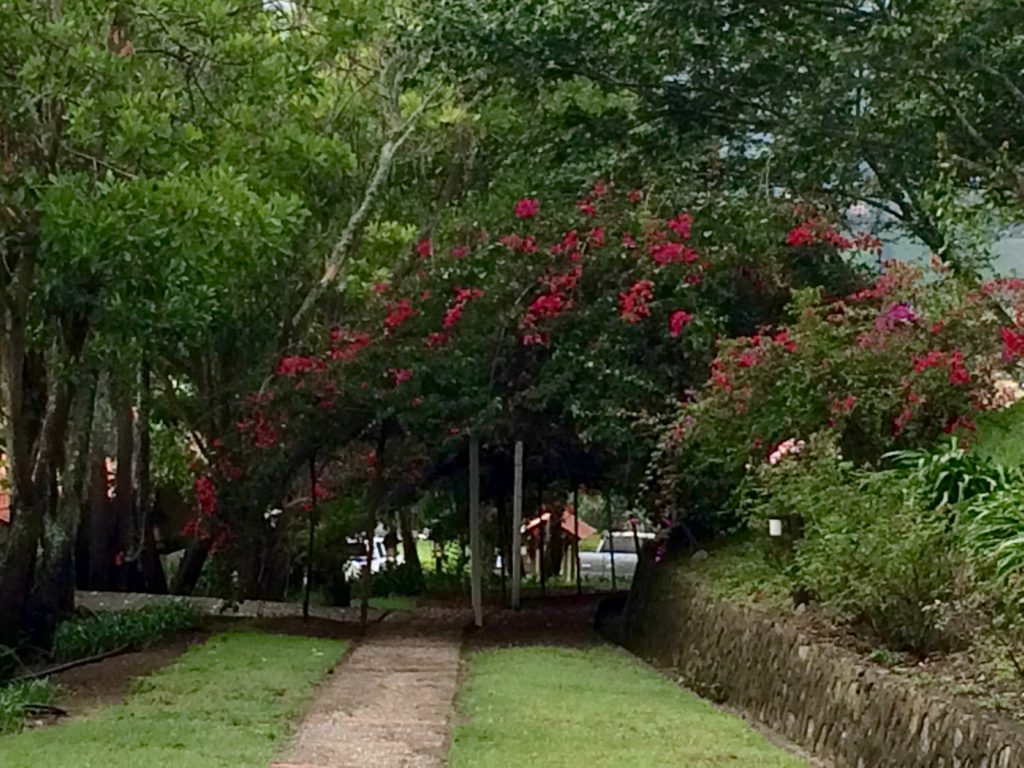 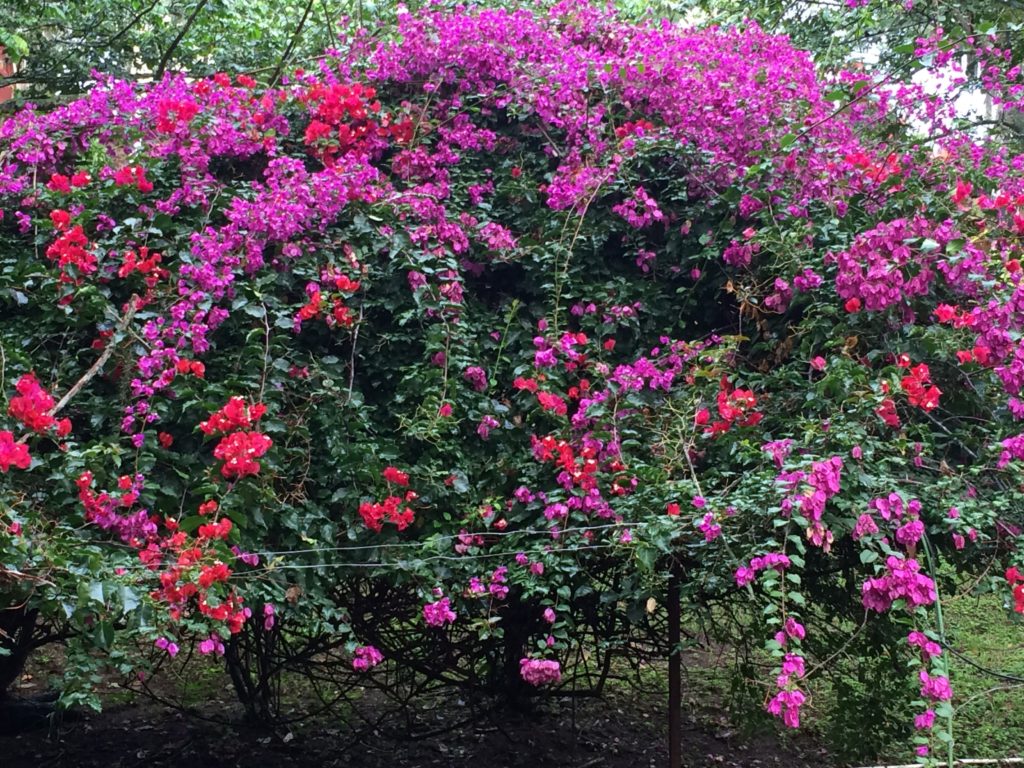 Altocerras Villas was a lovely find, and admirably met our tourist needs for quiet and comfort. One little pointer if you are planning a trip: in order to get warm water for your shower, you have to turn on the little dial by the light switch in the bathroom. It looks like the dial for the jets on a jacuzzi. Given that our room had no tub, much less jacuzzi jets, I thought it was merely a superfluous wall attachment. We read the notice that it might take a few minutes for the warm water to come, but we didn’t connect the instruction with the switch. The more stoic among us had a cold-water shower. Not me! 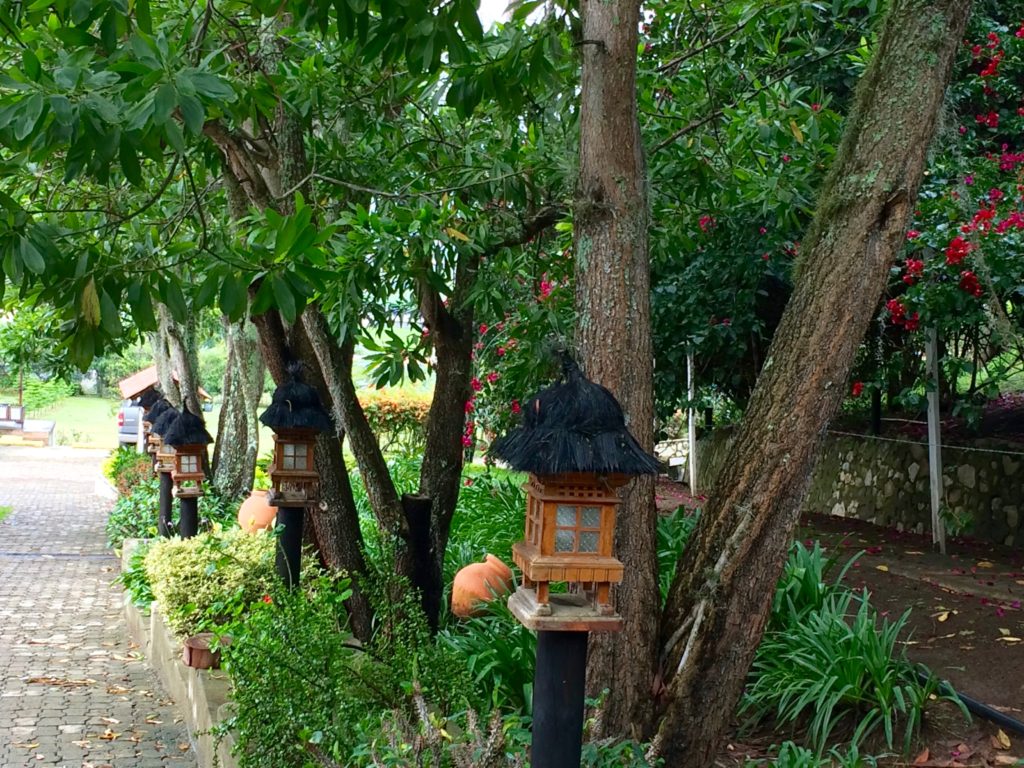 Path to breakfast at Altocerras Villas 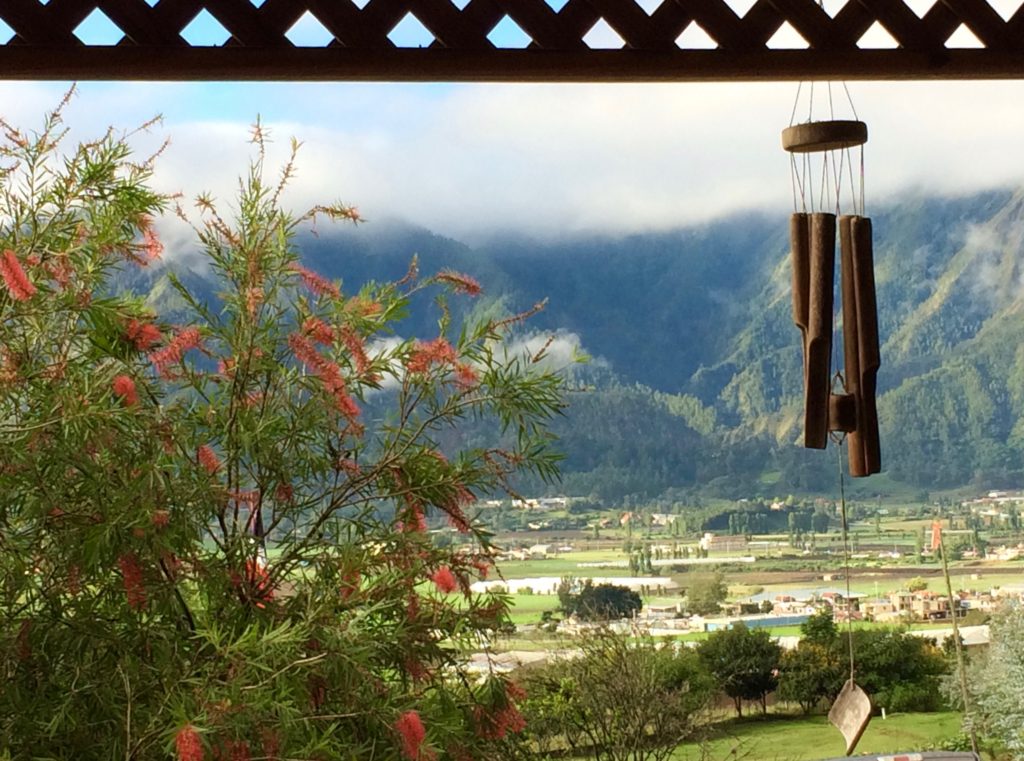 Constanza Valley from the breakfast table at Altocerras Villas 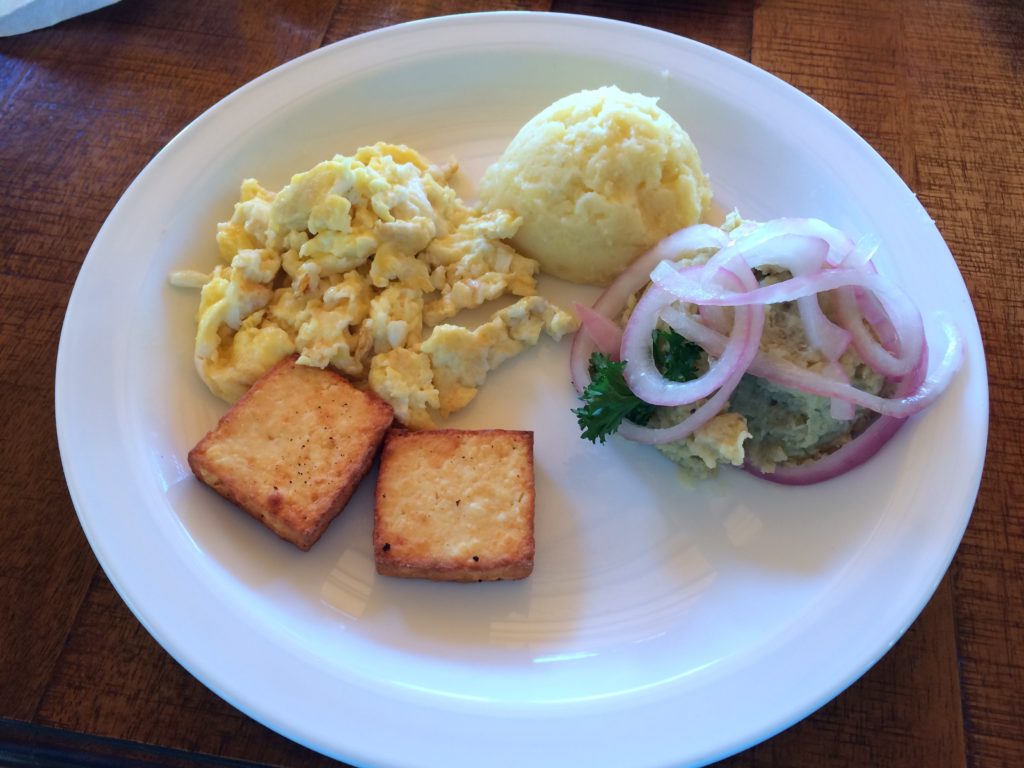 They serve breakfast in another open-air location. As we picked through an excellent presentation of scrambled eggs, fried cheese, mashed potatoes, mangu with pickled red onion garnish, a plate of fresh papaya and pineapple, with juice and hot chocolate available on demand, we tried to figure out the day. It had rained hard all night and the road had been impassable before the rain. How much worse could it get? Lots. At least that was our guess. 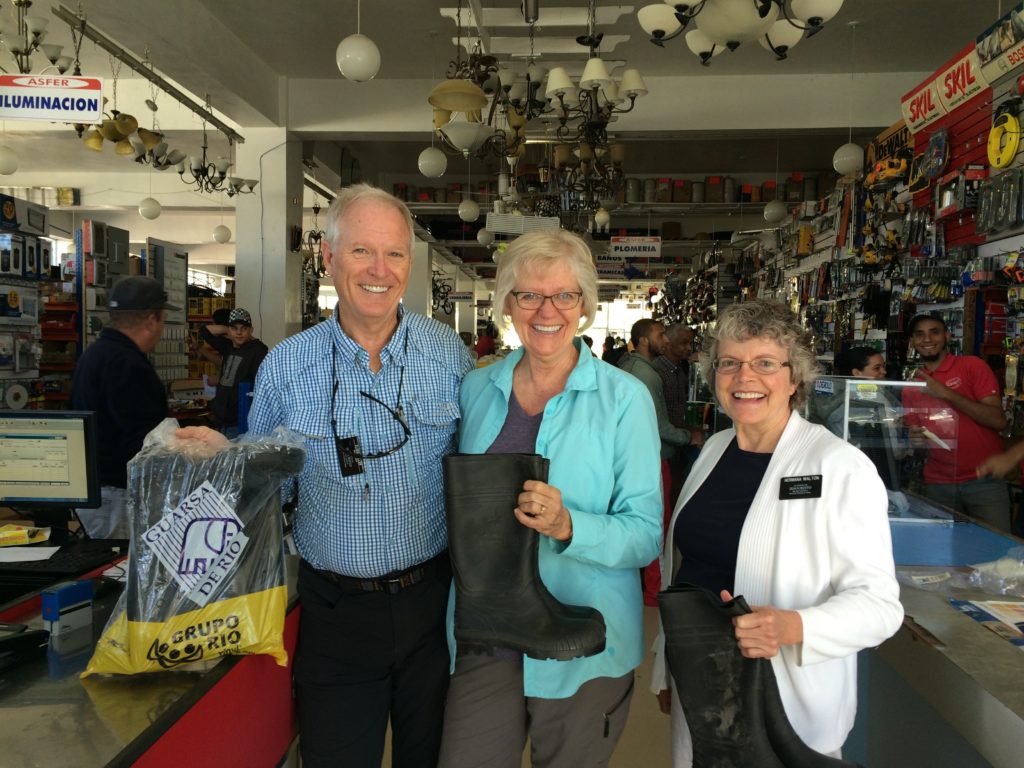 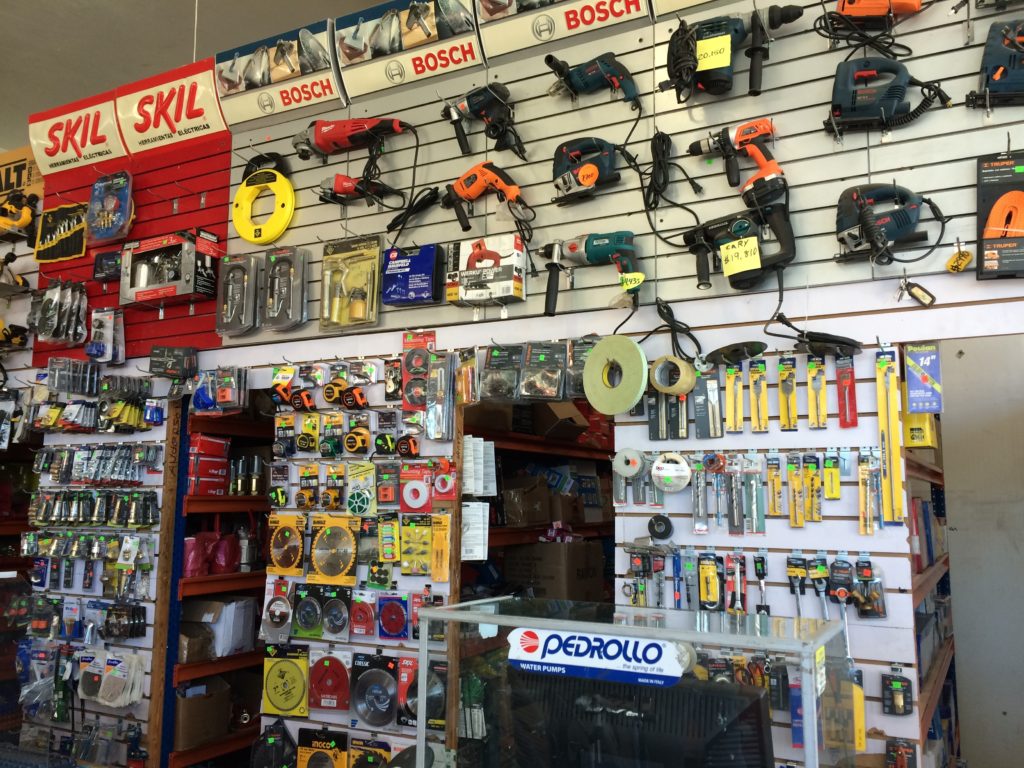 Huge ferreteria by any standard

One intrepid soul announced that if he were alone, he’d buy a pair of gumboots and walk to Aguas Blancas falls when the road became impassable. It sounded like a good plan to me. Pretty soon the four of us were searching through Constanza ferreterias (hardware stores) for black rubber gumboots. We found plenty of men’s boots in sizes 7 to 12, but two people needed a 6 and there was only one pair available. Coincidentally, each person had one larger foot that happened to be opposites. They compromised by wearing one size 6 and one size 7 boot! With several pairs of socks it worked. Properly outfitted by 11 AM, we drove off for a second try at the falls. 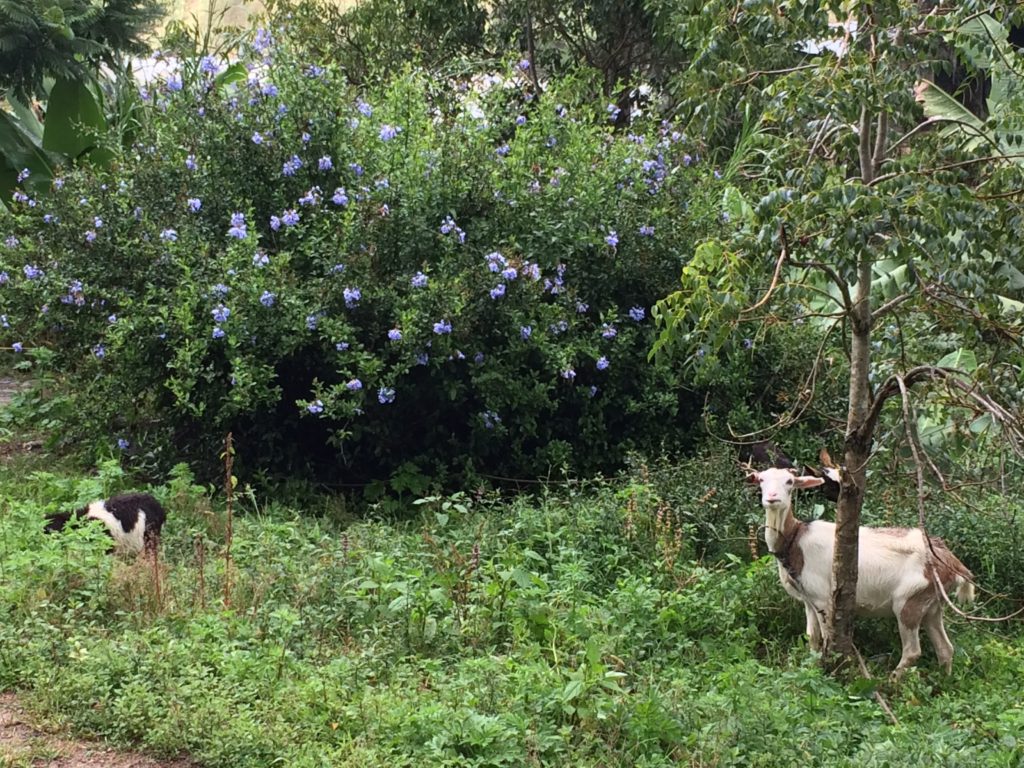 On the way up we stopped to photograph flowers and goats at an intriguing-looking wooden structure, which turned out to be a restaurant/bar during the summer season—La Perla Restaurant, I suspect. A young man with his arm in a cast appeared out of nowhere to sell us some potatoes. We said we’d stop on the way back and didn’t think anything more about it.

The clouds lifted and took the mists with them. We felt optimistic about the filtered light for photography and about climbing to the falls in our gumboots. We vigilantly watched for the lost license plate and paraphernalia along the roadside as we drove. 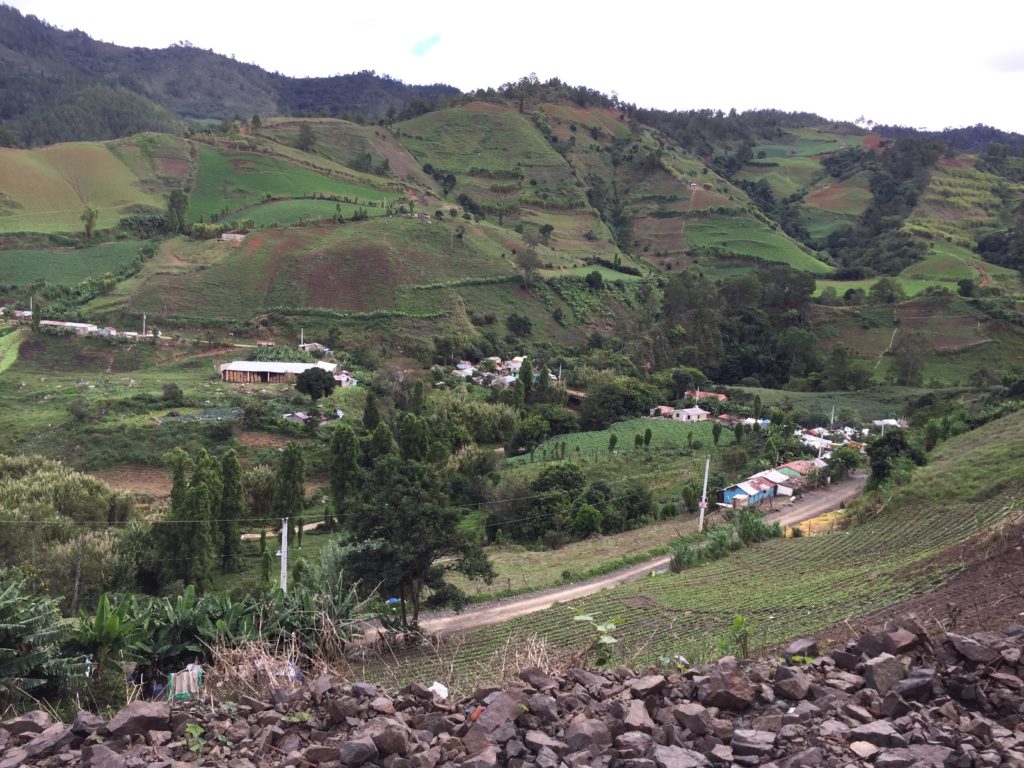 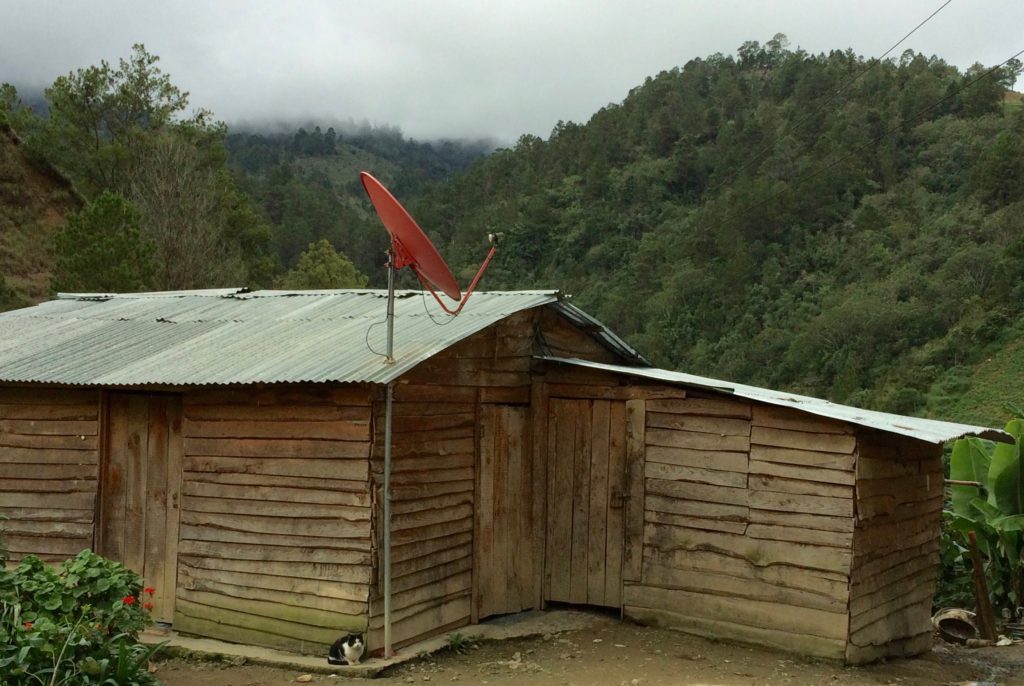 Perched on the edge

The dirt road we traveled cut along the side of hills with terraced farmland above, below, and beyond us. From time to time we cut our speed to pass through hamlets of farm worker’s shacks. On one turn we happened on a funeral. The road was clogged with people, a wooden coffin just inside a darkened room. Plates of food on the tables. A couple of people dressed in suits. Most in work clothes. Looked like they were hanging out, visiting quietly. Perhaps more formal ceremonies would come or had already happened. No way to tell. I hoped the death was an elderly person who’d lived a good life. 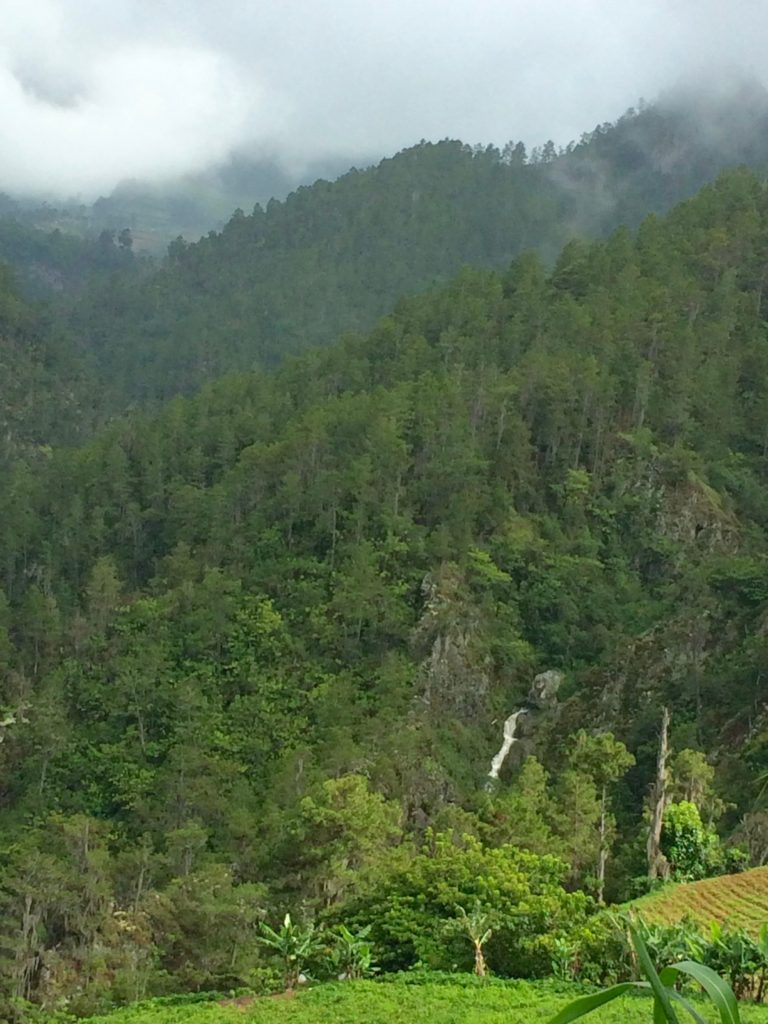 Glimpsing the falls past the fields 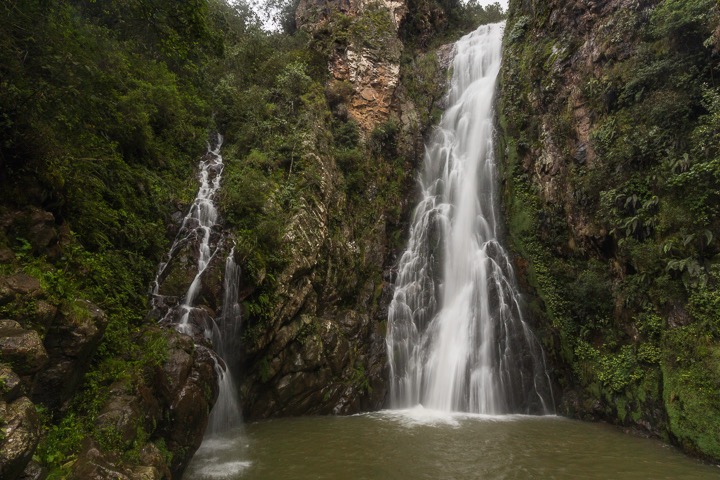 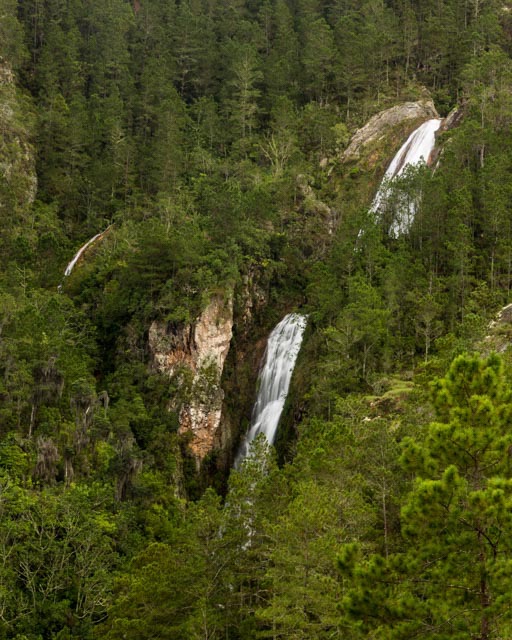 In the distance we could see two of the three tiers of Salto Aquas Blancas. We parked on the side of the road, pulled on our gumboots, and set out along the trail to the falls. The cloud cover gave excellent lighting for photography. The recent rain created a heavier flow of water than usual, and the little falls along the way made light music for our trek.

On the way back to Constanza, we stopped to buy the potatoes at La Perla and to stretch our legs. Just as we were ready to leave, a large flatbed truck carrying a load of bagged potatoes with workers sitting on the top pulled over. The driver asked us if we had lost a license plate. We both stared at the hole in the back bumper of our SUV for a moment, and then he said, “I know the man who has your license plate. Follow me.” 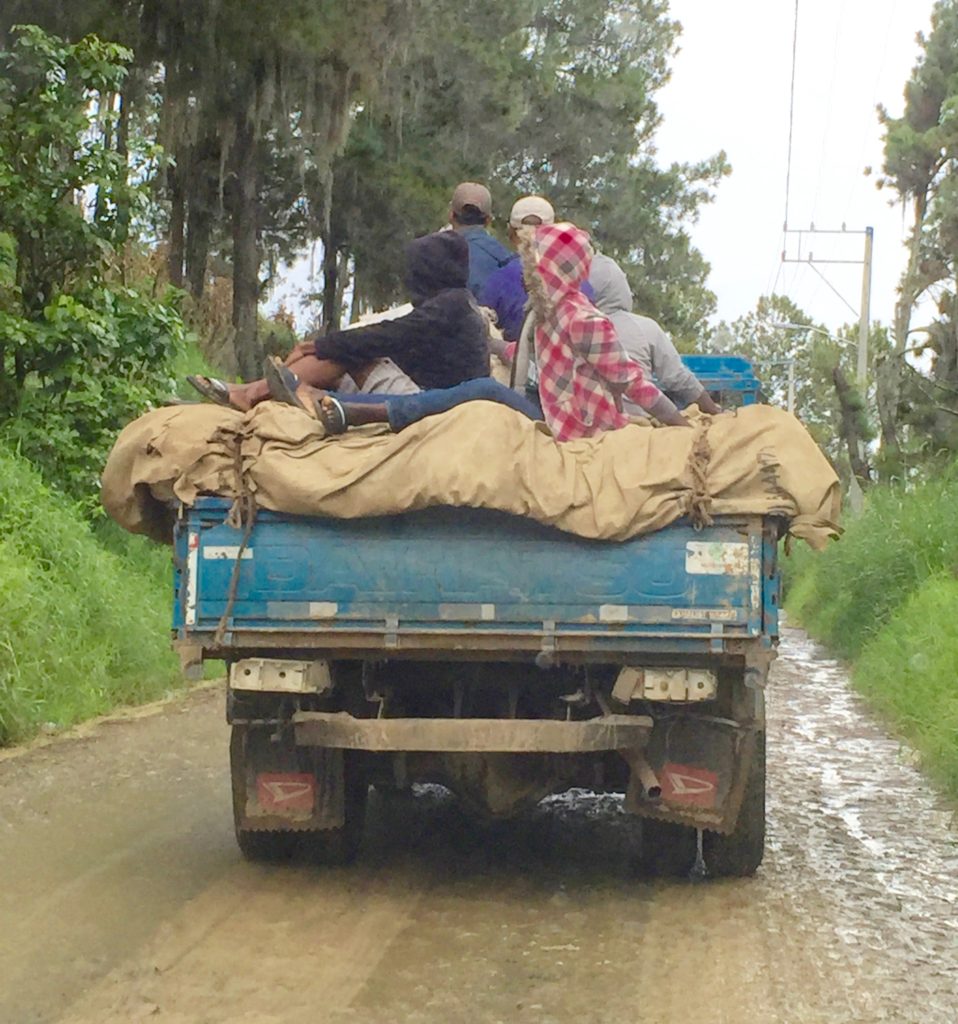 So we did. All the way down that muddy mountain road! The truck pulled into a courtyard that seemed part garage and part loading dock. The boss-man handed us our license plate and a barefoot workman directed us to pull over a grease pit where he reattached the plate with a few well-placed screws.

Fate of the gumboots

Meanwhile, I was trying to figure out what to do with a couple of pair of black gumboots we’d never use again, be it in the city or at the beach. I looked around the work yard trying to figure out which men had feet the same size as the boots. Impossible. So I handed one pair to the driver of the truck as my thanks for noticing our vehicle had a gaping hole in the back bumper and taking the time to help us. He nodded, checked the size, and tossed the boots in the front seat of his truck.

I started to hand the second pair to the man who seemed to own or manage the yard, had found the license plate, and was willing to hand it over. He took the boot to try on. At the same time a skinny worker in hard-worn, soiled work-clothes took the other boot from my hand and pulled it on. For the next 15 minutes the boss wore the left boot and the worker wore the right boot.

The worker kept yelling at me about how much he needed the boots as he energetically moved around the yard loading and unloading the potato trucks. I’d pantomime that the boss had the boot and throw up my hands. He’d repeatedly point out the flapping sole of his worn-out running shoes, sodden with the wet of working in a muddy field. I couldn’t figure out how to help him. Maybe the owner was kind of teasing him and enjoying the comic effect of each man wearing one boot. I kept hoping it would have a happy ending. 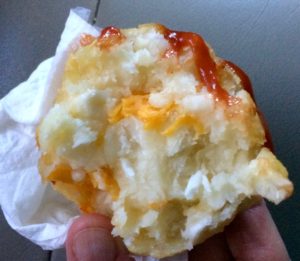 Meanwhile, someone had called in a street-vendor, so we each chose a hot something—all delicious.

Finally, just as we opened the car doors to leave, I saw the owner/bossman in the blue and white striped shirt put his arm on the shoulder of the worker as he took off the left boot. The worker pulled the boot on and scurried off with them both. It seemed to me that he was working in over-drive, a sort of thank you to his boss.

Think of all the parts that had to happen in that story in order for a good result to occur on both sides. We got our license plate back and repositioned on the vehicle; two men got brand new boots.

What I lost and found in Constanza

What I think I lost in Constanza was the image of idle Dominican men. Unemployment is high on the island. We’ve seen droves of men lining the streets at all times of day in every town and city from Pedernales to Punta Cana. Often they’re playing dominos, or talking in groups, but sometimes they are alone, silent and dejected. Not in Constanza. We did not see one man standing around useless.

What I found was a sort of balanced energy about Constanza. A first-class example of a  prosperous community. Maybe it’s living close to the soil, maybe it’s having jobs for everyone. Whatever it is, Constanza has it in abundance.

One thought on “Lost and Found in Constanza Part Two”