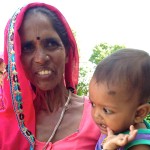 The city gates to Jaipur of the Golden Triangle added a sense of drama to the day as we entered. Gates restrict, enclose, protect. Our imaginations bloomed as we approached them.

I had assumed Jaipur was called the “Pink City” because of a local building material, which is partially true. Many buildings are made of pink sandstone. But to enhance the effect, the town was painted pink in 1876 to celebrate the visit of England’s Prince of Wales. The event and the paint made the town so famous that the citizens have kept it up as a tradition. 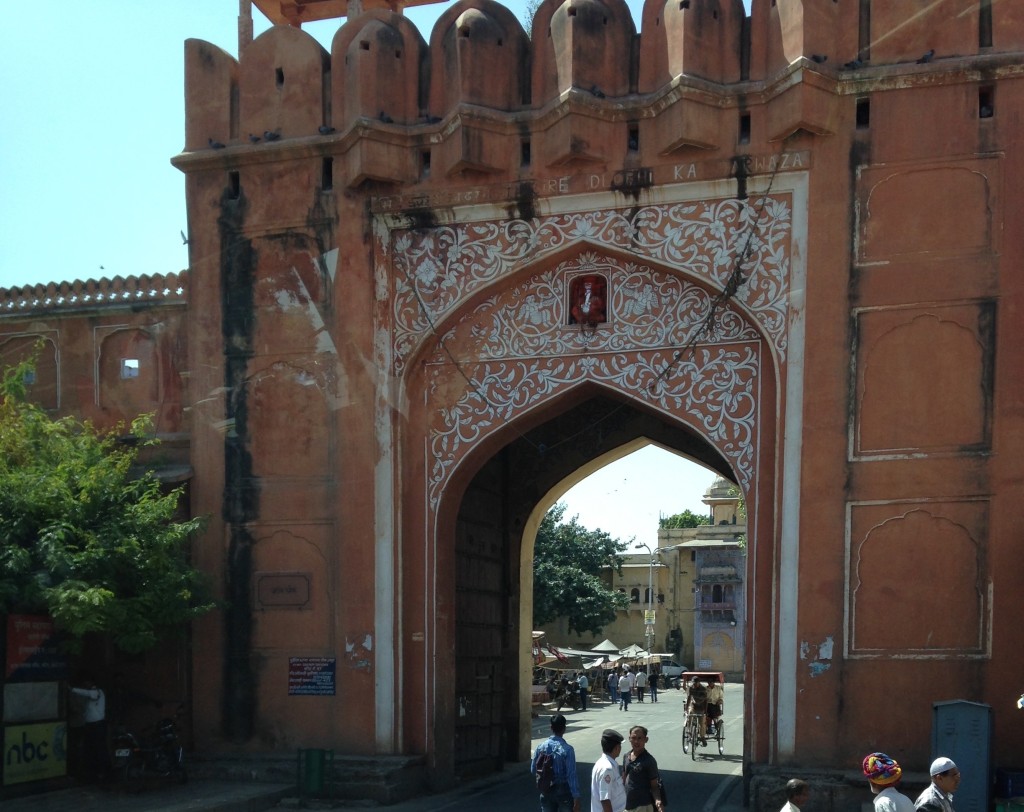 Have you ever seen stone carving on this scale that seemed so absolutely frothy? It looks like a strong stream of water from a hose would dissolve the whole thing into ribbons of sugar and shortening. But this structure is definitely not a confection! It’s rock solid. 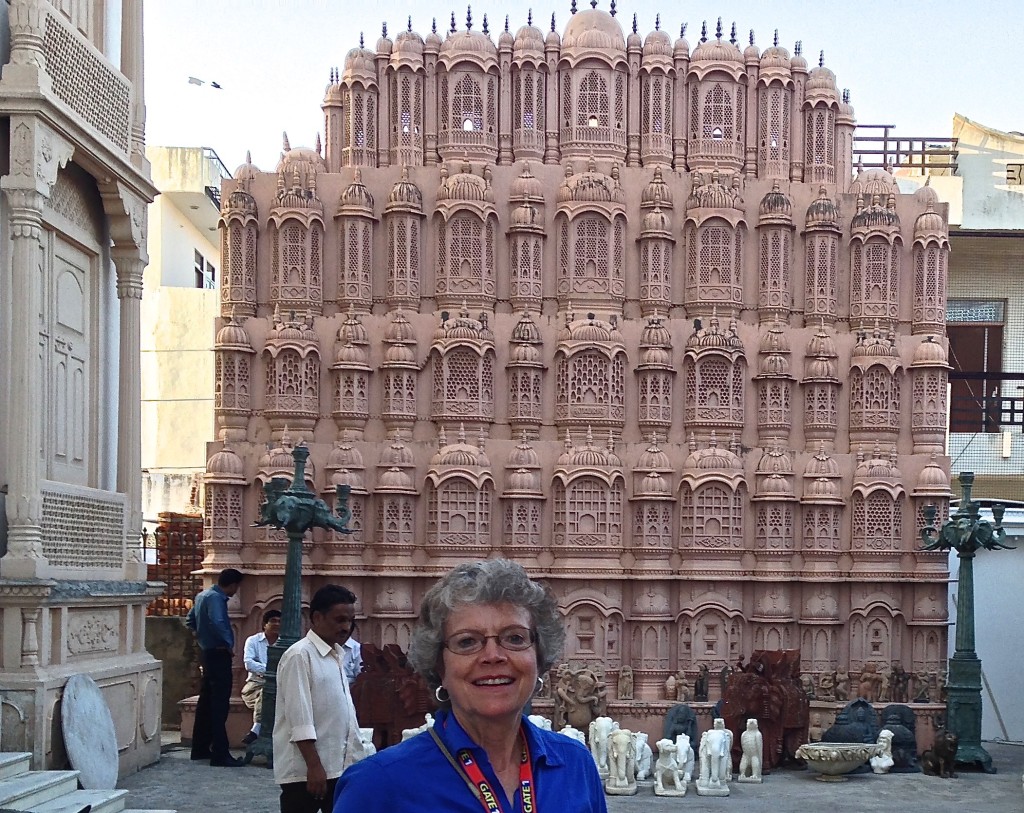 I have to say a pink city is a beautiful thing to behold! I can think of a few dusty little towns back home that I’d like to spruce up. Paint one pink, another butter yellow, another aqua. Wouldn’t that be interesting?

But to be accurate, the lower stories of the buildings at street level, were business as usual. 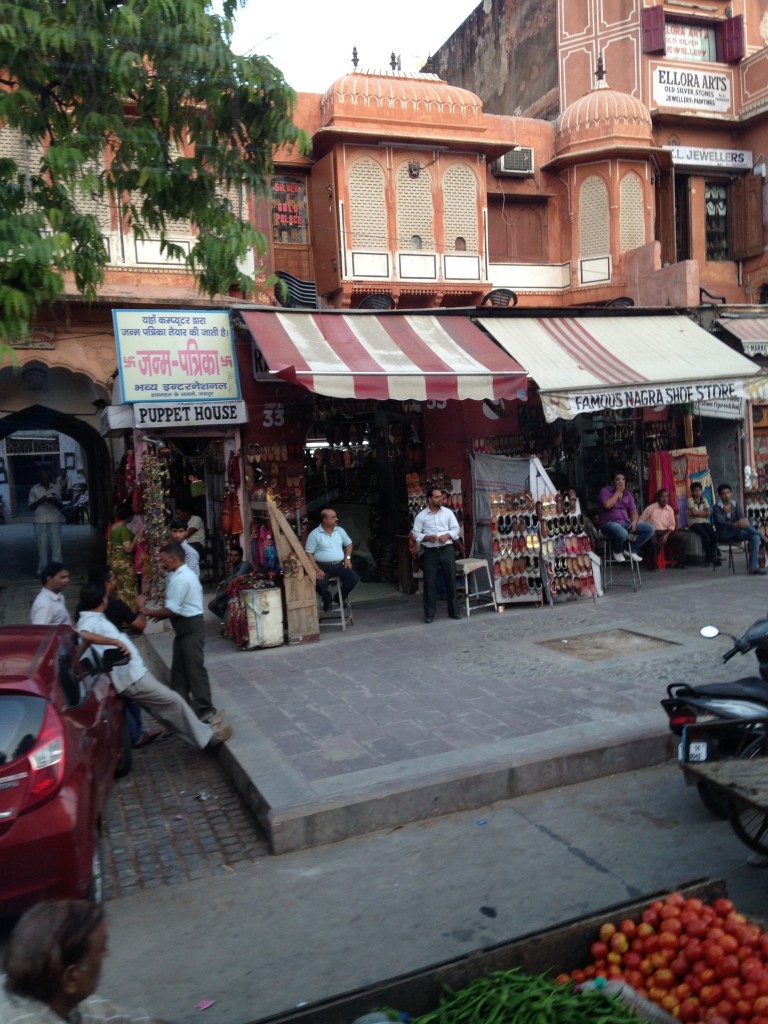 Various scenes in the movie, The Best Exotic Marigold Hotel, were filmed in the main square of Jaipur. My friend and I had to quell the impulse to leave the tour and strike out for a new life in a new country just like Judi Dench.

Our tour wasn’t set up for shopping—it was far too fast paced—so Anna set up what she called a “bus bazaar.” Rather than taking the time for each person to haggle with vendors over the price of every trinket available for tourists to buy—a practice that wears you down—she offered to have the vendors stand outside the bus with their wares. Before the bus pulled out, she’d bargain with them on our behalf and get a fair price. Then we’d all pay the same amount, feel like we’d been treated fairly, and be on our way.

I had already bought some marionettes in native costume, had gotten them for less than half the asking price, and felt like I’d done a fine job of bargaining. But on Anna’s Bus Bazaar they went for a third of the price I paid. You have to shrug and call it “tourist tax.”

That evening just as dark was settling, we returned to downtown Jaipur and the real bazaar, ablaze in lights, with gorgeous colors glowing. Jaipur is the city for buying textiles. Such beautiful fabrics! We bought tunics and pajama style Indian pants—far more comfortable than western pants—tablecloths and pillow covers. The sari lengths were so elegant that we nearly bought half a dozen of them in various shops just to wallow in luxury—and then sanity entered. No, we don’t wear saris at home, and whether I had one or ten, I still wouldn’t have anywhere to wear it.

Between you and me, though—the next time I’m in Jaipur I’m going to buy a sari or two or three and when I return home I intend to wear one every day even it’s snowing outside and the neighbors stare. I try to resist looking at them Online and coveting. Every woman at any age looks beautiful in a sari.

If your egalitarian tendencies are still in full bloom, don’t stay in this lovely hotel. If you need a respite from heat and a vigorous sight-seeing schedule, then relax into the ambience of quiet elegance, have a massage, enjoy the delicious buffet.

We were only two days into India and already we knew we needed to come back. The moment didn’t pass—it returned again and again. We’d see hilltop forts and palaces in the distance and we’d long to go exploring at our leisure.