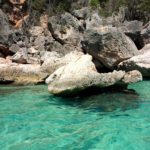 I’ve been asked to post our itinerary for visiting southwest Dominican Republic, which includes Barahona, Pedernales, Bahia de las Aguilas, Laguna de Oviedo, Baharuco River mouth, Larimar Museum, and Los Patos .We spent three nights in Barahona, plus two half days on either end to drive the 4 hours between Santo Domingo and Barahona.

• Arrive 6 PM at Casa del Mar Lodge and Restaurant in Santa Cruz de Barahona 829.330.3395. I’ve listed a full description plus other choices for hotels on the strip of coastline south of Barahona at the end of this blog.
• Dinner at restaurant in the hotel
• Dip in the disappearing edge pool on patio in front of our rooms

Day 2 — Drive the southwest coast of the Dominican Republic

West of Barahona the topography changes from tropical rain-forest to dry desert with cactus and spiny tough underbrush; looked nearly impassable. We’d heard about “jumping cactus” – apparently the spines are white and very long, so it’s easy to get tangled up in them. Friends told us that the U.S. South-west has the same kind of cactus in Arizona and New Mexico. And here I was waiting to see what kind of mechanism allowed the trunk to contract and thrust into a jump. [Sigh. I once believed in the snipe bird, too.]

Pedernales – about 65 miles west from Santa Cruz de Barahona, which borders on Haiti
• Looked in on the International Market; had planned to visit it, but it was very intimidating. The name suggests goods from all over the world sold in stalls. Well, the stalls were there, but it looked to be old stuff from Haiti and old stuff from the Dominican Republic. We saw huge trucks packed with clothing bound for Haiti.
• Our original plan had been to overnight in town before going to Bay of the Eagles. So glad we didn’t do that. Mostly we saw a lot of squalor. If there’s more to the town than that, we missed it – sorry.

Bahia de las Aguilas (Bay of the Eagles is named for the shape, not the local fauna)
• Turn south off the road to Pedernales; last 5 miles is slow-going because of washboard
• Lunch of fresh sea-food was very good in a thatch-roofed restaurant on the beach; I had mashed plaintain formed into a cup with fresh sea-food in a creamy sauce – excellent!
• Hired a boatman to take us along the beach and through the gigantic boulders that have fallen from cliff’s edge into the sea. One looked very much like a fish.
• Some of us went snorkeling for Queen Conch shells, since the area is a prime habitat. We were often served conch in the seafood dishes on menus. There are piles of the shells on the roadway near the beach area, but it’s always more fun to find your own.
• The boat pulled onto the sandy beach below a tall wooden lookout, so some of us climbed it. Very windy on top.

Laguna de Oviedo (saline lake in Jaragua National Park)
• We had stopped by in the morning but the light wasn’t good for photography and the wind was up enough to make the lake water choppy
• Returned to the lagoon on our drive back from Bay of Eagles about 5 PM. The light had softened, the wind was down, and the birds on the far eastern side of the lake were settling into their roost on the tops of the mangroves. We saw an abundance of flamingos, both old and young; ibis; the great egret, snowy egret, and pelicans.
• Sometimes our boatman would cut the motor and walk the boat in silence through the lake toward the birds. The lake is often only three or four feet deep – 9 feet at its deepest.
• Our guide told us that the lake is three-times the salinity of ocean water because of fissures in the bottom that allow the seawater to leach through the rock into the lake. Freshwater comes in from the Bahoruco Mountain Range, but there is no opening to the sea.
• If we’d gone to the south end of the lake we’d have seen the giant rhinoceros iguanas in the wild. We’d recently seen them in pens at Cave of Marvels near La Romana

Visit Larimar museum and store; km 18 before La Cienaga
• Learn what differentiates the various grades & what the raw rock looks like
• Various well-known artists have separate display shelves
• The workshop for shaping the stones and making the jewelry is open 9-5 weekdays only. Tours are available; phone 829.470.6526 or 809.392.5933

Pick up Larimar on the beach at mouth of Baharuco river; KM 18 on Carretera Barahona-Paraiso
– A fleet of young boys will offer to help you find the beach Larimar. Don’t expect them to do it merely from the kindness of their hearts – it’s their income. Be sure to come with a lot of spare change since it’s unlikely they’ll share what you give them.

Lunch at the free public swimming hole
• Six tiered pools coming down the side of the hill.
• Food court is open-air; various kinds of fish cooked over a wood-stove
• We had steamed langostini (fresh lobster) with garlic, butter, and lime juice – delicious
• Side-dishes of green plaintains, cooked, then mashed and formed into small rounds and fried again – also delicious with a little salt
• Rice with beans – I’ve enjoyed every version I’ve tried
• After splashing in the fresh water pools with the local ninos, we picked up some fry-bread rounds on the way down to the car (taste a lot like Navajo fry bread). They serve them with ketchup, (like the U.S. eat French friend potatoes) but we declined.

Visit Chupadero Larimar mines in the Sierra de Barahuco
• Requires a guide because the trail is unmarked and needs 4WD vehicle with high suspension; or guide will take a group of 4 in a truck for 1000 pesos (less per person for a large group); very rough road.
• If you have a sturdy spine, speak Spanish, and enjoy talking to the natives, this could be a very good experience; Visit mining town, Olla Del Pelampito.
• Our hotel receptionist advised not to go because “some people feel so bad about the miner’s conditions that they want to take their Larimar back to the store.” We decided against going.

Day 4: Drive back to Santo Domingo

For more JMBryce Travel blogs about visiting the Barahona and Southwest Dominican Republic area, go to Sunrise over the Caribbean Sea, Beautiful Blue Larimar – Uniquely Dominican, and Exploring Barahona to Pedernales on the Haitian Border.

• No a/c; fans in the rooms, but if it’s hot Aug/Sep weather you might not want to go there
• Bills itself as an eco-hotel – e.g. makes own unsweetened juice for breakfast
• Beds are good; clean rooms; clean linens; gorgeous setting by ocean
• Breakfasts are good, but repetitive: 2 eggs, a rolled up slice of ham and of cheese, 3 dry toast halves, plate of fresh fruit; bottle of unsweetened juice; milk cartons, cookies
• Impossible to lock our room because it was open to the deck; keep valuables in car trunk
• Restaurant is open-air overlooking the sea, so ambience is lovely
food is good but pricey; service is personable and good
• Take lots of drinking water; 2 small bottles of water were included in the room on the first day; they cost 55 pesos each after that!

Casa Bonita
• Another green hotel with scenic views up a hillside, not by the seashore
• Very pricey but friends who have stayed there say it’s worth it
• Chocolate bar; good restaurant

Rancho Platon Lodge in the mountains near Paraiso
• reputedly good (haven’t seen it); you can reserve the tree house room
• need a 4WD to make it up the road

Descriptions of the following can be found on the blog www.andersoncoolrunnings.wordpress.com
Taino sauna
Local baseball (a unique combination of cricket and baseball)
What is Larimar?

To investigate next time:
Find out more about Monte Sacro near Barahona. Seemed from YouTube to be a sacred mountain with a house and gardens for meditation.