Is dog sledding on your bucket list? It was high on mine. So my daughter and I spoke with the owners of Dog Sled Adventures Montana about taking a ride. I’m so glad we did. I’d seen the dog truck driving around town in Whitefish, MT, and it definitely caught my attention. Incidentally, the sub-title of their web site reads, Travel at the Speed of Dog, which I think is fun. 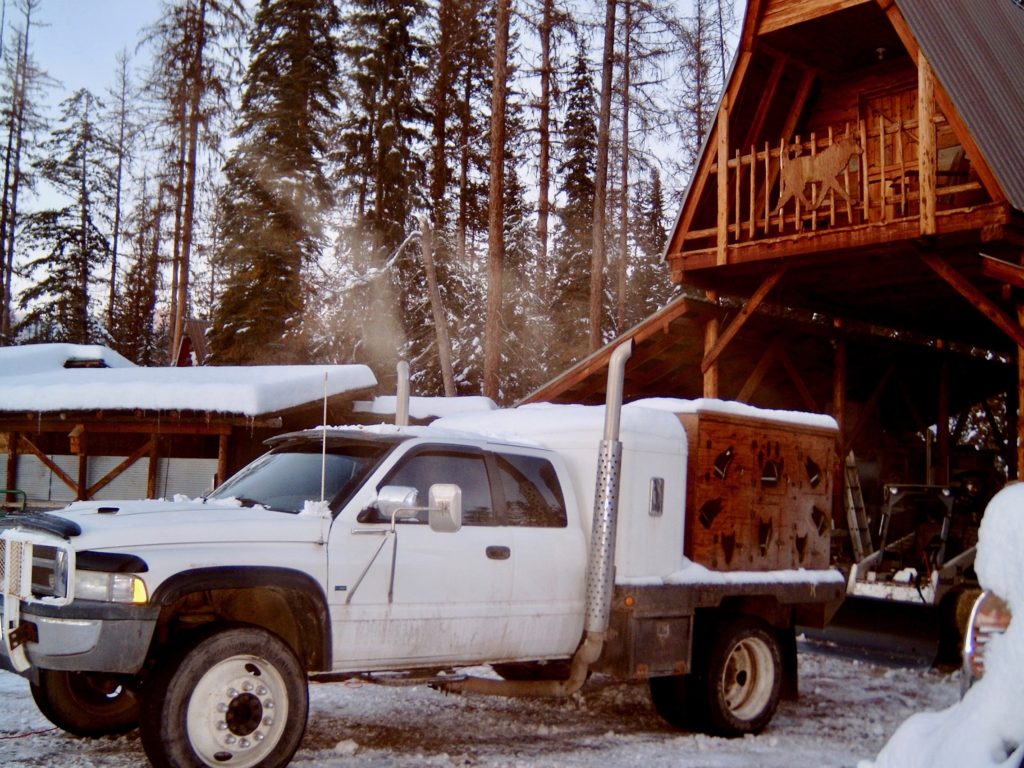 In order to accommodate my daughter’s work schedule—Big Mountain is very busy with skiing guests during the sled dog season—we had to arrange for a tour after work, which put our excursion rather late in the day. That accounts for the long shadows in some of my photos. 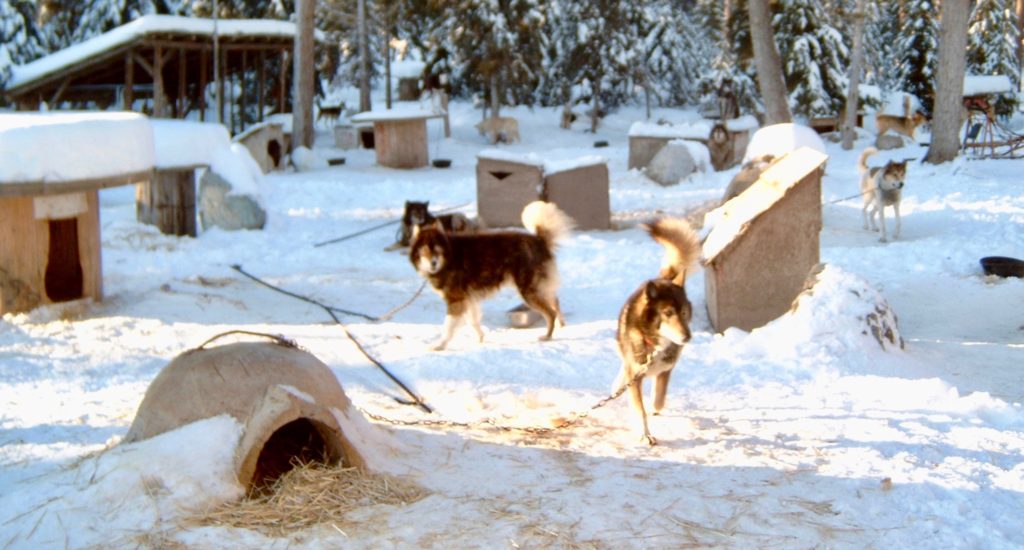 Dogs who love to pull a sled

As we drove into the yard, we heard the dogs barking. Whether or not they were greeting us and commenting on our arrival, or whether they keep up the racket day and night I have no way of knowing. But that many excited dogs can create a deafening din! I had never seen so many dogs all in one place in my whole life. Each had its own little hut for shelter, its own bowl for water and food, and each was firmly linked by a chain to one specific area. 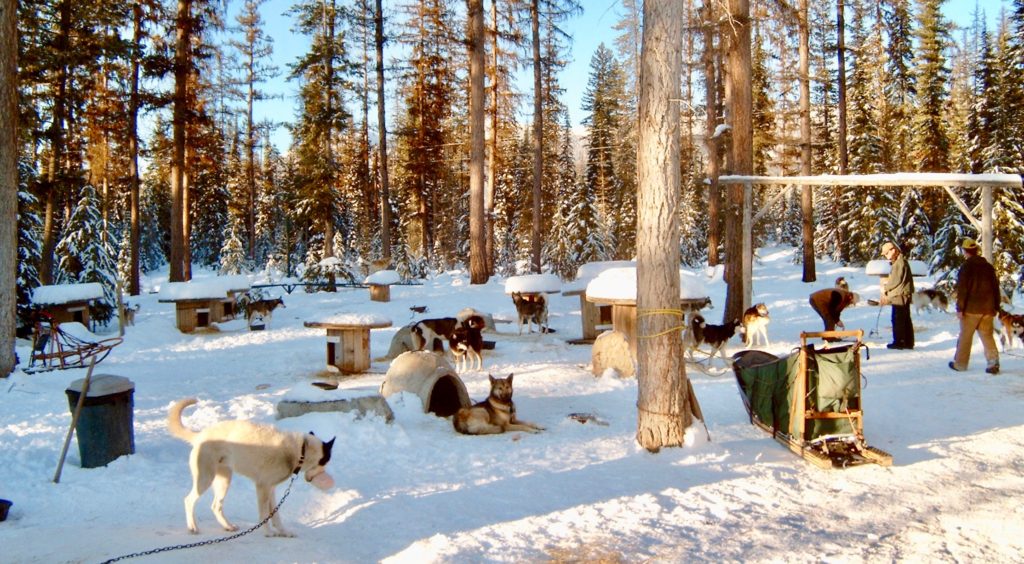 Even though I love the beauty of a dog running free and fast, I privately felt very glad for the chains. My grandfather’s sheep dogs had attacked me when I was a little girl. I was eagerly running down the drive-way to give my grandpa a hug when a couple of his sheep dogs silently grabbed my legs with their teeth, one on each leg, and knocked me to the ground in one split second. My grandfather called them off before they did extensive damage to my tender flesh, but I had to have antibiotic shots in the bum daily for a week or so. Although theoretically I believe bygones should be bygones, I’ve never really trusted a large exuberant canine ever since then. Somehow I can’t get over flinching whenever a large dog rushes toward me. 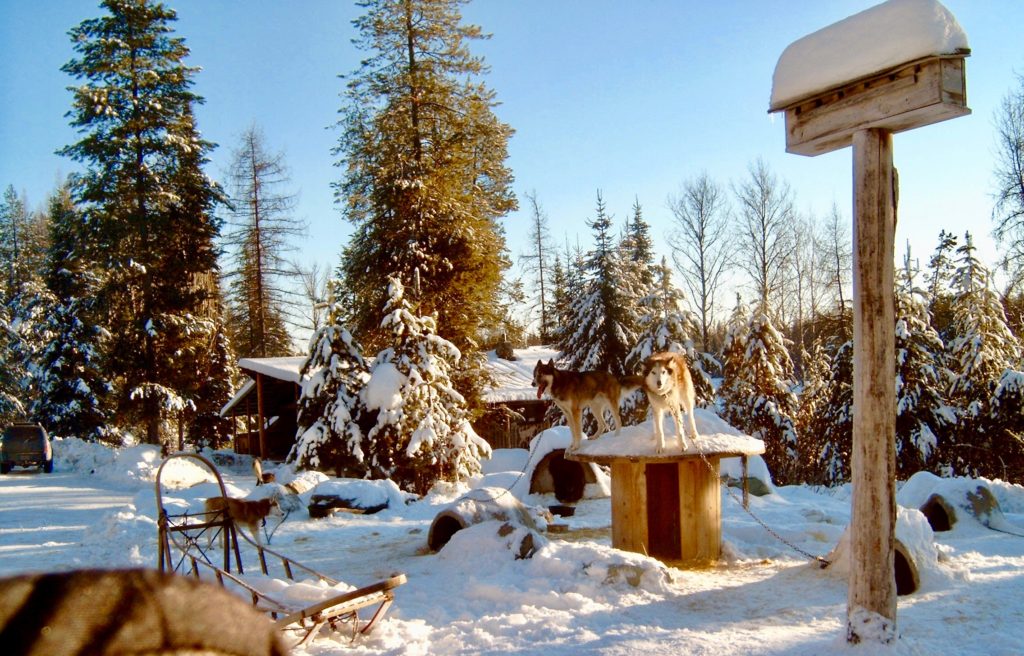 Left behind this time

Some of the dogs in the yard seemed to know when the team had been chosen and quieted down, either sitting on their houses and watching, or completely ignoring us. But a few dogs howled their displeasure, apparently at being left behind. Here’s a closer view of the sled that we’d be riding in. 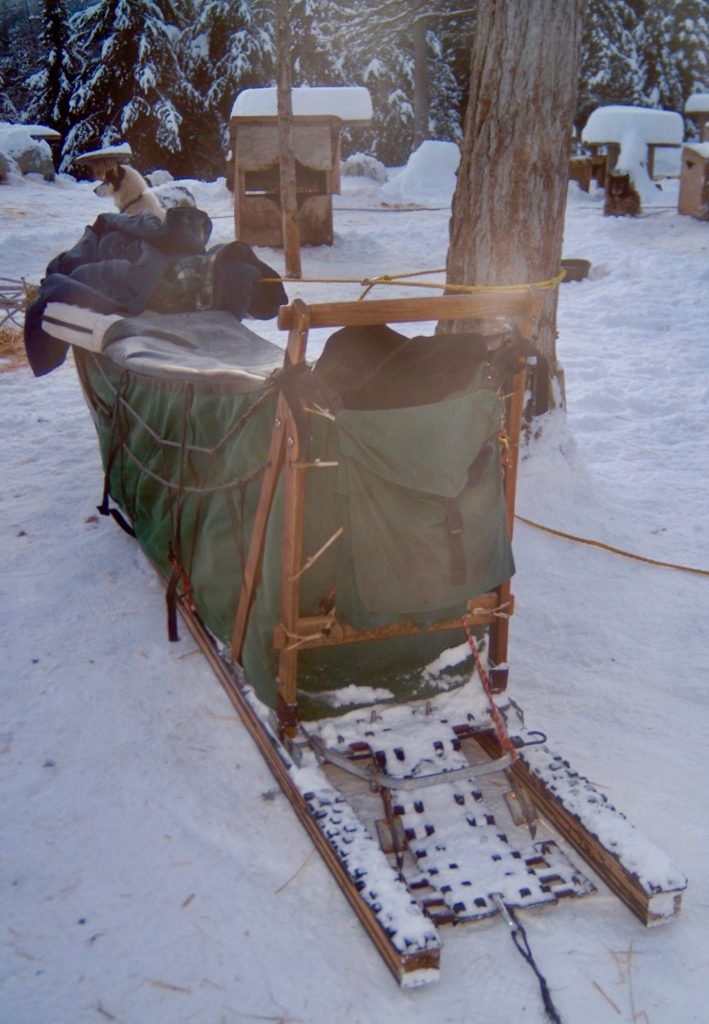 Dog sled from the rear

We came prepared for the cold, a good thing as the sun began to drop. We wore thermal underwear, ski pants, sweaters, parkas, ski mittens, scarves for our faces, and toques or wool hats for our heads. When the dogs start running, that’s a lot of cold air on your face. 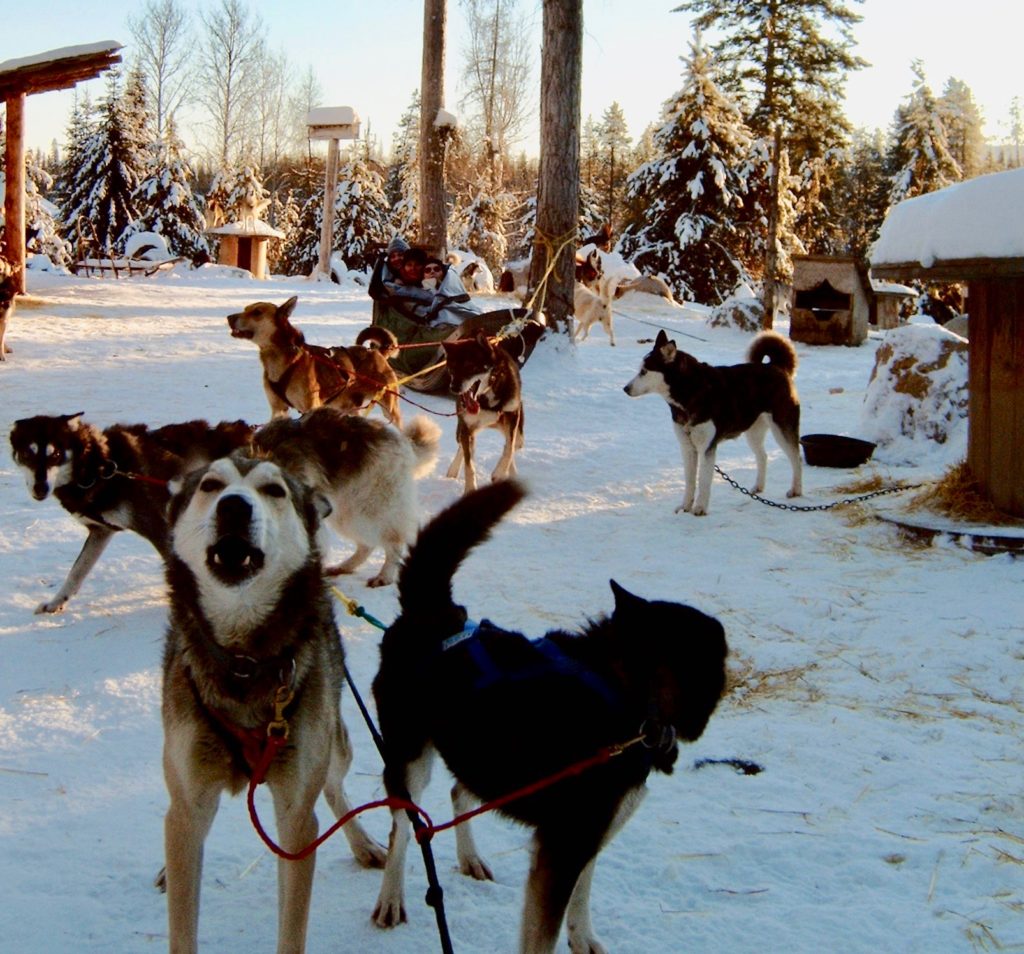 For information on the backgrounds of some of the dogs that pulled our sled, we found this article posted in the Flathead Beacon highly informative. It’s good to know that rescue dogs can be rehabilitated to do the work they were born to do. 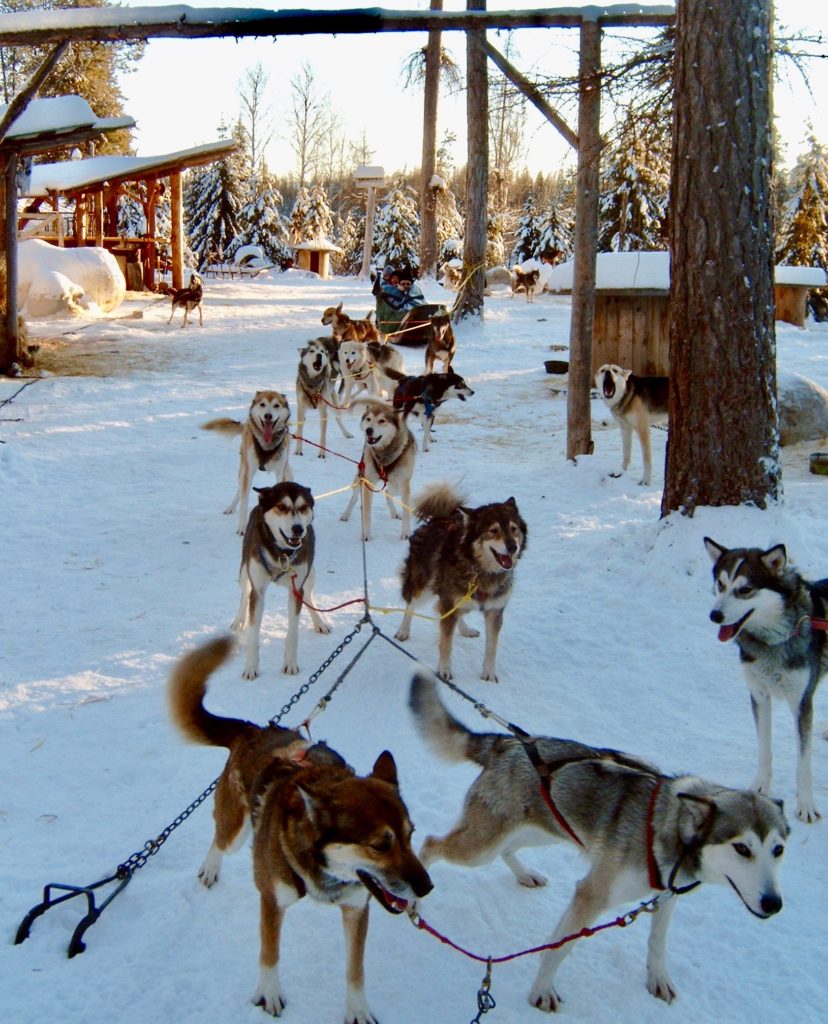 Initially, I felt almost apologetic for the effort the dogs would have to do on my behalf. So, I was truly amazed to see the eagerness with which they anticipated the evening run. All that barking sounded like, “Take me! Take me!” The owners of Dog Sled Adventures Montana explained how they carefully assess the various abilities of each animal so it gets the exercise and training it needs in order to maintain top athletic condition.

Something about those sled dogs that day made me love the concept of working dogs versus house dogs that don’t do anything useful or disciplined. As a result of the sled dog experience, when I left Montana I avidly watched the documentary series Dogs with Jobs about working dogs in a plethora of needful situations. Some of my readers might enjoy Dogs of War, also a documentary series. 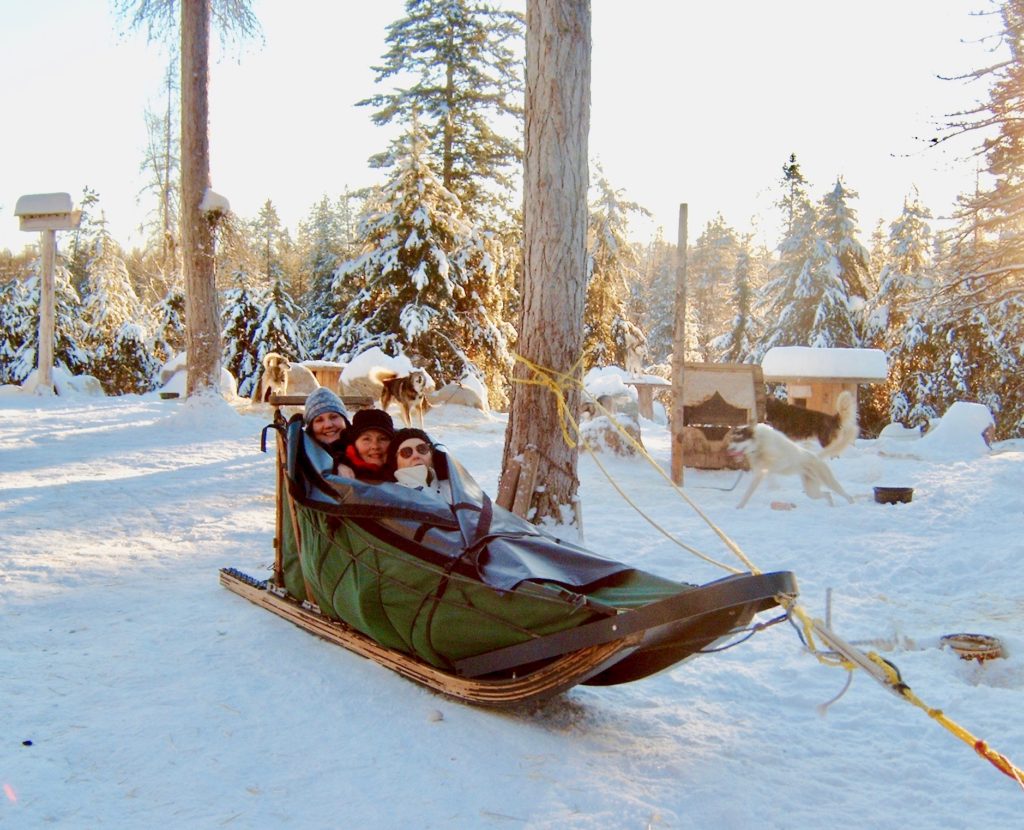 Readying ourselves for the ultimate ride!

The day we had scheduled our dog sled ride followed a week of thaw and freeze temperatures with no precipitation. This meant that the track was quite icy. Sometimes the dogs preferred to pull in the looser snow to the side of the track in order to increase their traction. But when we headed downhill, the speed was incredible. The drawback was a lot of chatter; a lot of jarring to the spine and bum. I have to think of this first experience as being a partial fulfillment of my bucket list. The next time I go, I want to try a snowy track with a few inches freshly fallen. 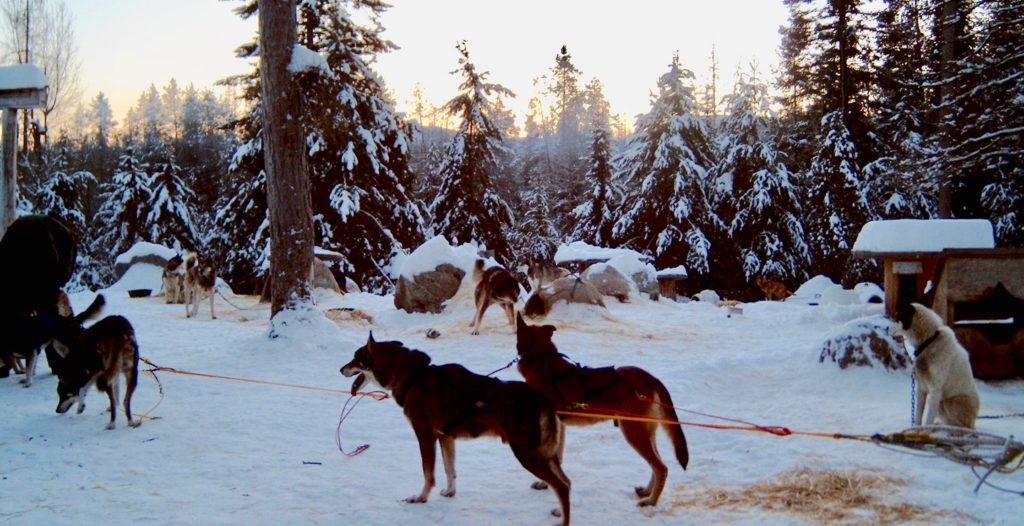 End of the run

Here the dogs are waiting to be taken out of harness at the end of the run. The company we used, Dog Sled Adventures Montana, treats their human guests to a cup of warm cocoa and chocolate chip cookies afterwards to wind down. Visiting with the owners about their dogs and their experiences mushing while we warmed our faces and tummies, rounded out a highly pleasurable experience.

Other Dog Sled Companies in Montana

There are many other dog sled companies in Montana that you could consult. Base Camp Big Fork, for example, is an all-around outdoor adventure guide in the beautiful Flathead Valley of Montana. Apparently, they allow guests to drive the team of Inuit Sled Dogs, while constantly shadowed by an expert who ensures a completely safe situation. They also organize many other activities including dog carting in the summer. Wonder what that would be like!

Another company with good reviews would be Winter Woods Dog Sled Tours.

Or, if you are interested in mushing through the beautiful Garnet Range, The Resort at Paws Up is listed as a premier resort property. Their website lists Iditarod Champion Alaskan Huskies as being available for dog sled adventures. I don’t know about you, but the name Paws Up appeals to me on several levels.

Triple Creek Ranch, which bills itself as “A Montana Hideaway” teaches patrons how to harness and hitch the dog team to a sled, as well as proper procedures for maneuvering so even novices can mush a team through the snowy mountains. This approach intrigues me almost as much as the ride itself.

Happy dog sledding to you all!