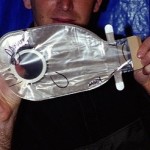 Guest A: People seem to be very sensitive about incontinence, and I’ve wondered why that is.

Guest B: Maybe problems with bladder control feel like a return to childhood or infancy. Break your leg? You wear a cast. People write jokes or sweet thoughts on a cast. But if you’re incontinent, you wear a stinky diaper.

Guest C: My mother was incontinent and denied it was happening. She refused to do anything about it for way too long. If we brought it up, she treated it like an invasion of her privacy.

Guest A: How is that even possible? Incontinence is a problem that manifests itself directly! I mean, there’s all that wetness to take care of.

Guest C: I know. But it was the whole humiliation thing. She couldn’t bear to be part of the group that had the problem. She’d point to an older women in stretchy pants who was very obviously wearing an absorbent pad. You could see the wad of it between her legs, particularly in the back. Combined with a short t-shirt type top or blouse, it was totally obvious.

Guest B: But if a woman wears a thigh-length tunic top, who would ever know?

Guest A: Or a loose-fitting muumuu.

Guest B: Or maybe a stiffer fabric for her pants. Something that doesn’t bend with the curves as much.

Guest C: But my mother took it a step further. She acted like incontinence was a blight against the entire gender.

Guest A: Didn’t she know incontinence was a problem with men as well?

Guest C: Nope. She bore the burden for all incontinent females the world over! (laughter)

Guest A: My father loved to travel, but as soon as he became incontinent, he’d hardly set a foot out the door. Wouldn’t talk about the problem. It was really hard to watch him withdraw from activities he loved.

Guest B: My dad had the same reaction. Stopped traveling completely. That was until he discovered the colostomy bag.

Guest A: My mother wasn’t trained as a nurse, so she didn’t have the skills to help him.

Guest B: You don’t need to have nursing skills to use a colostomy bag for bladder control problems. My father could take care of it himself using intermittent self-catheterization.

Guest A: I’m not sure what you mean by that.

Guest B: He learned how to insert the catheter into his own urethra. He got to know his body pretty well by wearing an absorbent pad and keeping track of his incontinence that way. He soon learned when he needed to use the catheter and colostomy bag.

Guest A: So did your father start traveling again?

Guest B: He did. With a colostomy bag tucked beneath his jacket, no one knew he had a problem.

Guest B: Actually, there are a few hazards to watch out for. Adequate hydration becomes very important, so my parents were always meticulous about keeping a supply of drinking water on hand. And you have to be careful about infection with a colostomy bag. But my dad and mom both said traveling with “the bag” was far better than staying home and merely wishing they were traveling someplace new and interesting.

Guest C: Wish my mother had done that. She loved to travel.