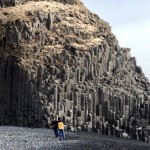 Iceland’s columns of black basalt that occur naturally across the island, seem to have entered the collective subconscious of its people, for they are replicated as a motif in the art and architecture of the country. If ever there were architecture inspired by landscape, it would be Iceland’s. Let’s start with the occurrence of basaltic columns in nature.

In Vik we saw a close up of the hexagonal structures (lower right of the photo), and connected them with the rocks of the Giant’s Causeway further east in Northern Ireland, probably along the same ancient volcanic ridge. 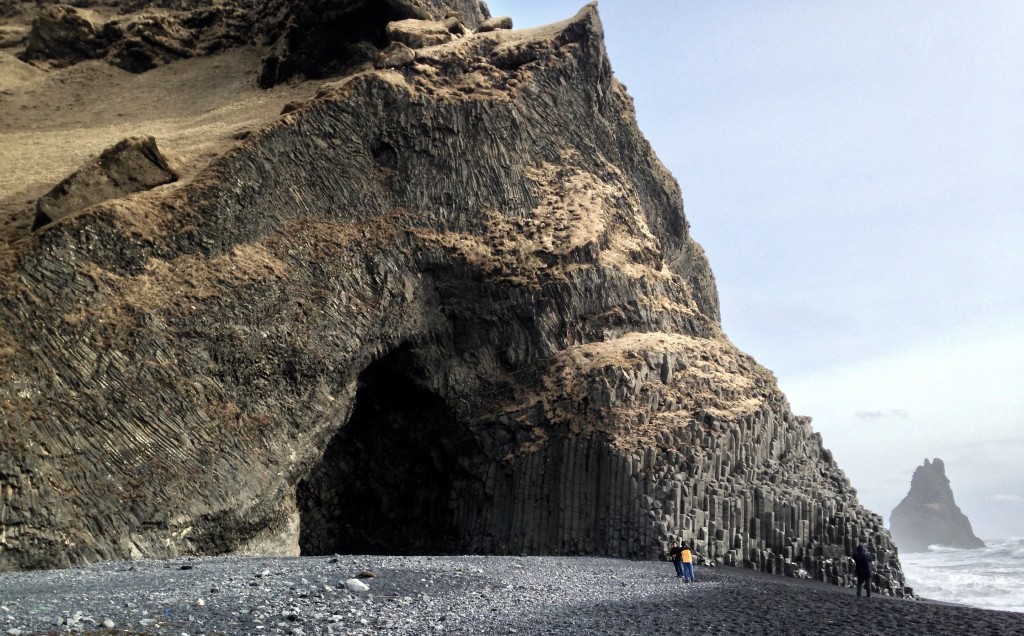 Hexagonal structures such as these are called the building blocks of nature because they are naturally occurring in many other substances. If you scald milk or boil pudding too long, for example, you can see the hexagonal shapes on the bottom of the pan. Remember that waxen honeycomb cells are also hexagonal, to name just a few. 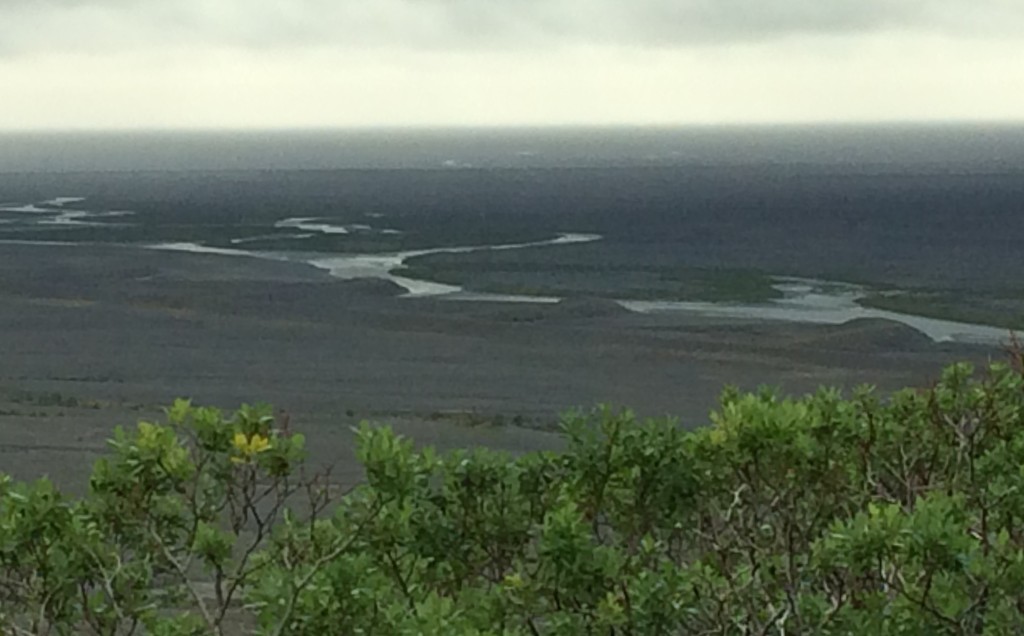 Another famous outcropping of the black basaltic columns can be seen in Skaftafell National Park at Svartifoss, which means “Black Falls.”

The path up the mountain was well-groomed, but involved a sizable elevation gain. We stopped frequently to view the flat lands in the distance, a vast blackened flood plain caused by falling ash and the sudden melting of the ice cap when the volcano erupts.

By contrast, the vegetation and the flowing water that occurred along the path felt safe.

The smaller falls such as Hundafoss flowed dramatically from the top of giant black basalt columns that formed the cliff. As we continued upward, even the creek was black as it ran over the black rocks. 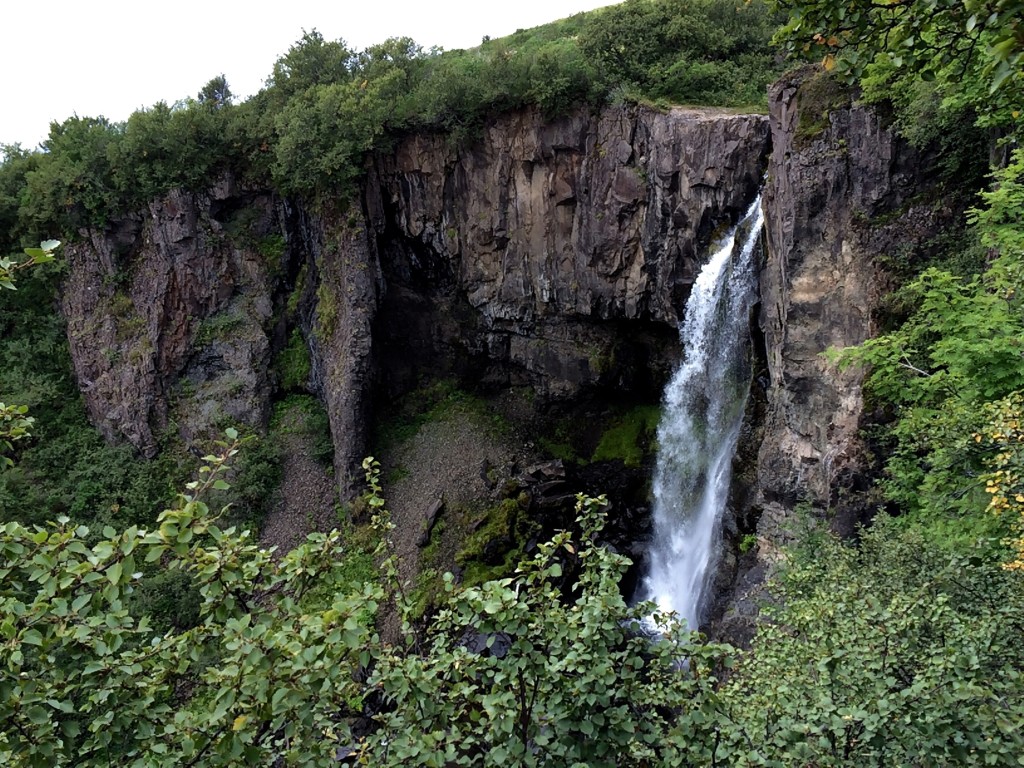 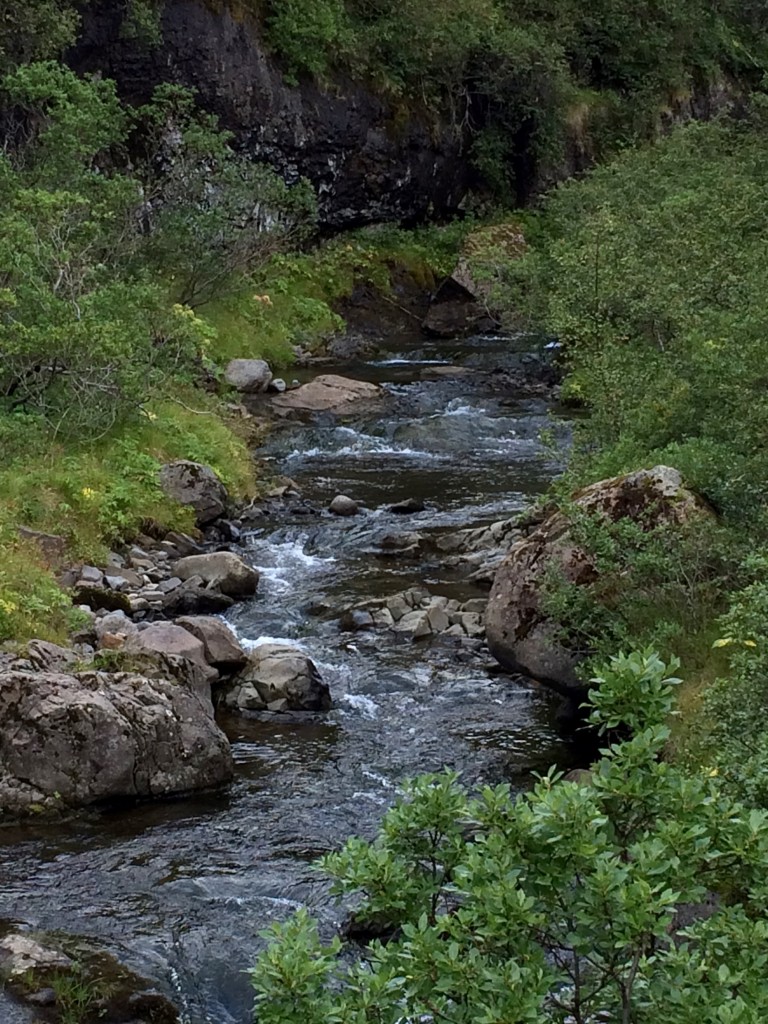 On the trail to Svartifoss 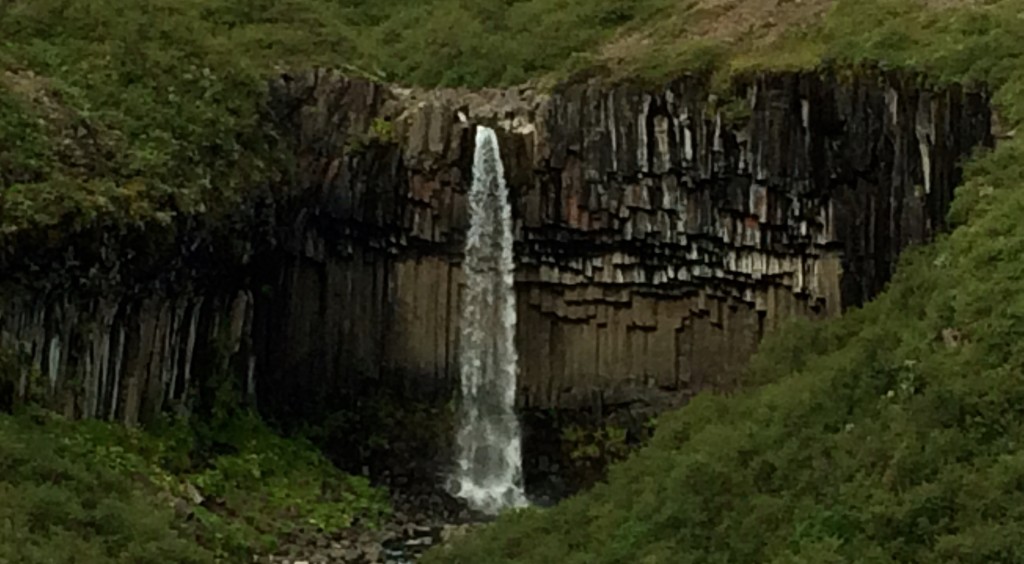 Water crashing over the brink of the black columns of basalt was spectacular. I felt like I needed to pause a while and pay my respects to such beauty and power.

Columns of black basalt also occur in the bays and lagoons north of Stykkisholmur in western Iceland. We had contracted with Iceland Seatours before leaving home to take the “Taste of Iceland” dinner cruise. But the evening had turned so dark and gloomy with a nasty wind, that I had a few moments of hesitation about it. Nevertheless, we drove to the docks and trudged to the big white ferryboat in time for the 6:15 PM launch. My attitude quickly changed as the captain narrated our ocean tour.

A thousand shades of grey

We navigated past the islands where Eric the Red wintered when hiding out from the men who had sworn vengeance on him for killing their relatives.

At one point I gazed out the window into a seascape comprised of a thousand shades of grey. I hate to use that term because of the notorious book citing far fewer shades, but the dwindling light on the water encompassed every possible value of the hue from silver through charcoal. Such scenes only last a minute or two in real time, but I’ll carry it always in my memory. I hope this photo can take you at least part way into the beauty of that moment.

We visited a fascinating island that was home to several species of birds. I felt a little alarmed as the captain drew ever closer. How soon would we beach? In fact, the island you see here has no shore. It’s a column of black basalt rising straight up some sixty meters from the ocean floor. Consequently, the ship could come very close to the nesting birds. The “birders” on board were delighted to see two rare whitetailed eagles, the national bird of Iceland. One of the birds graced us with flight from one island to another in the dusk of day. 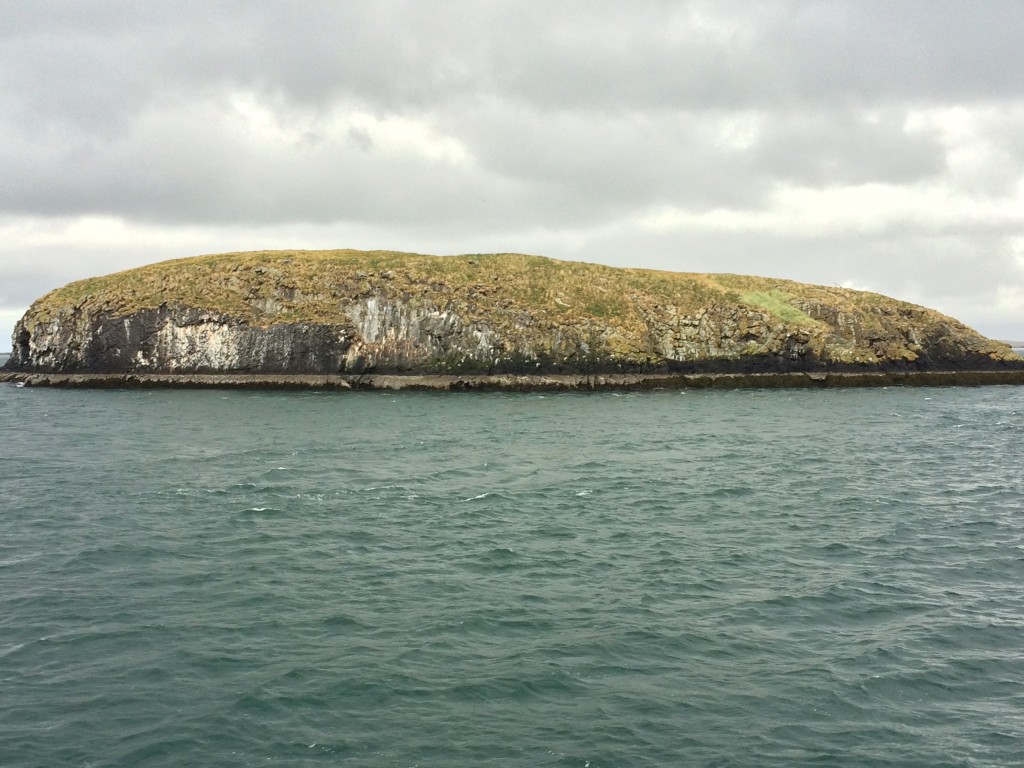 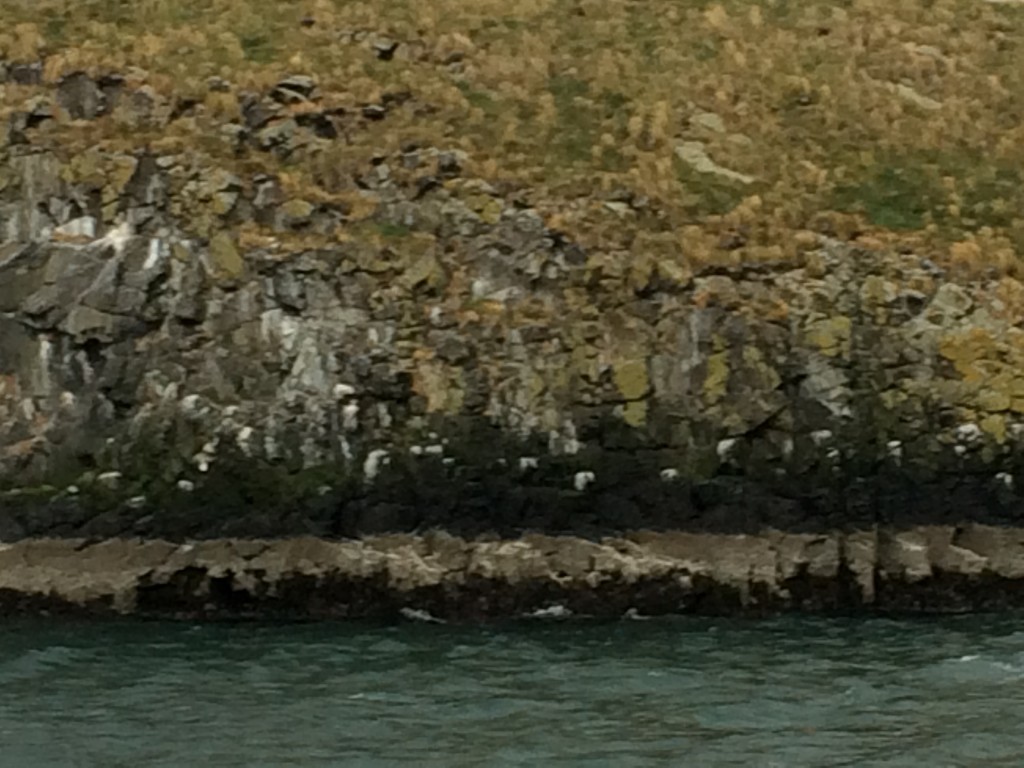 Somewhere between the islands on that dark, windy evening, I realized that I had seen those mighty basalt columns days before my hike to the waterfalls or to Vik. By the time I left the ship, I had connected those black basalt columns to Hallgrimskirkja, the magnificent Lutheran church in Reykjavik. 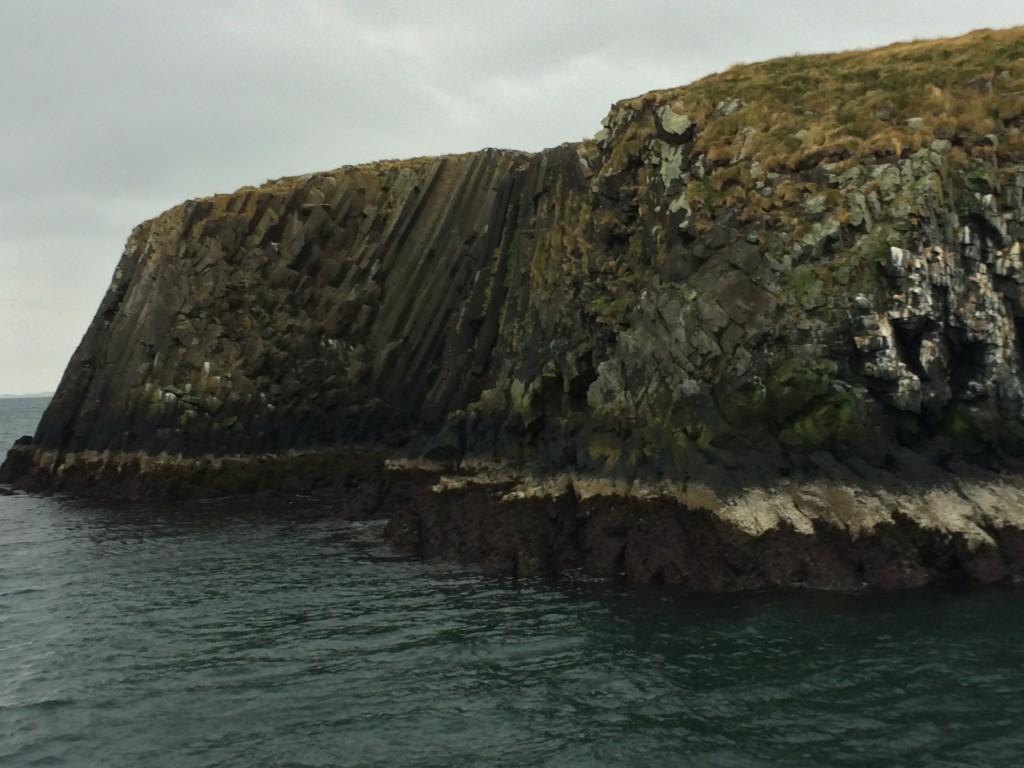 Black basaltic columns in the sea north of Stykkisholmur

The lines of the Hallgrimskirkja church lift the eyes to the heavens with a series of ever-rising columns, white in this instance. 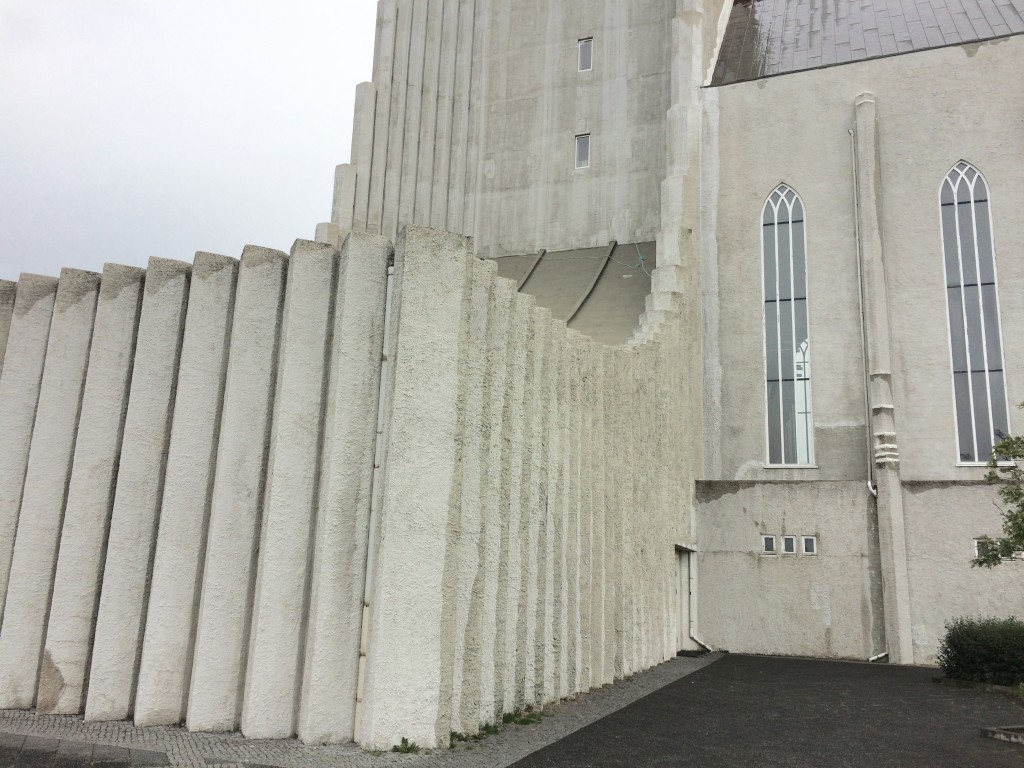 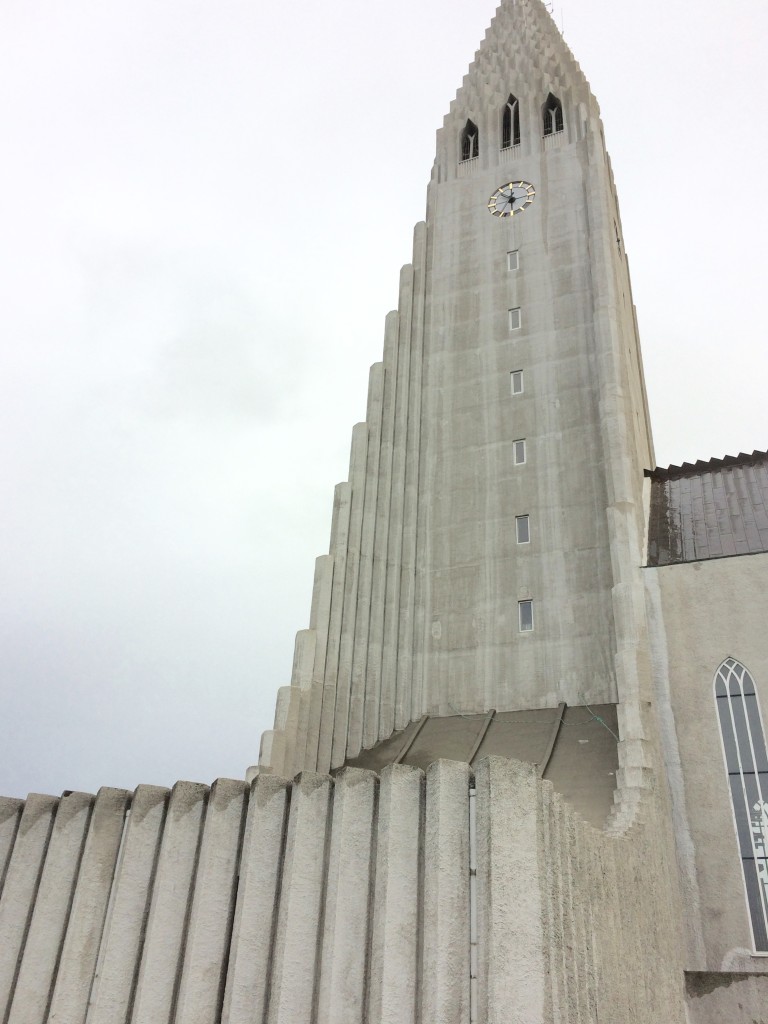 Columns to the height

Wooden sculpture made to look like black basaltic columns 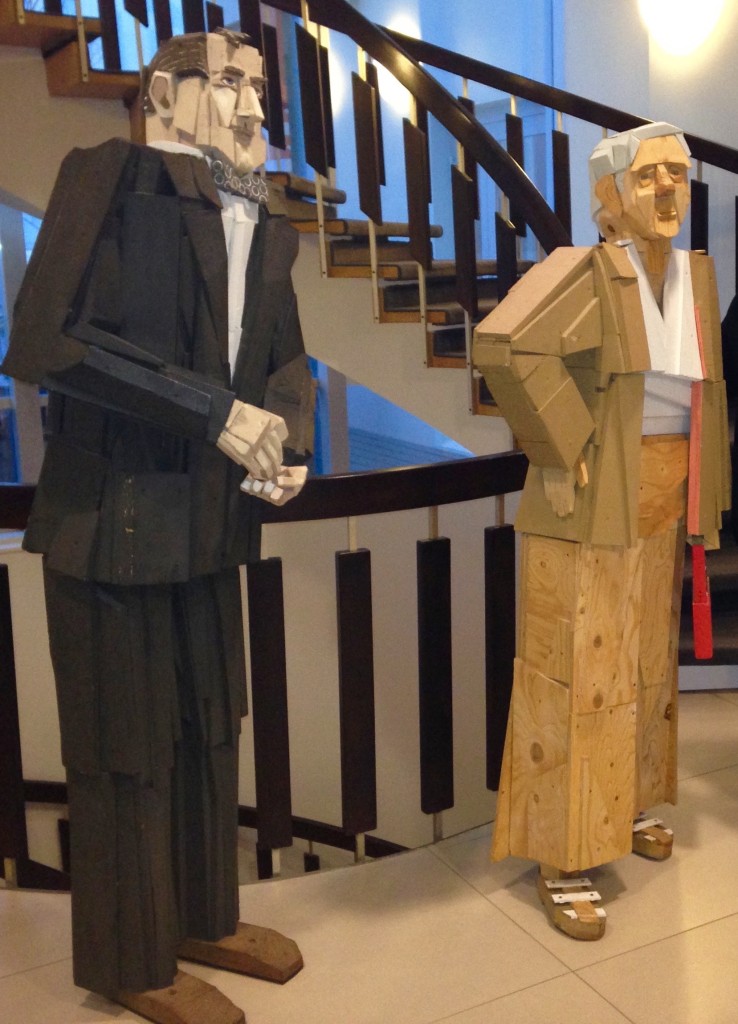 Truly, black basaltic columns are a recurring motif that informs art and architecture throughout Iceland.