Every attempt I’ve made to reconcile the Icelandic Sagas and Contemporary ethics has fizzled. I intended to be conversant with the Icelandic Sagas before I left for Iceland, but on every attempt it seemed as though my ethics got in the way. My daughters and I are curious museum-goers, so I hoped to have some of my aversion to the Icelandic Sagas meliorated during a visit to their land of origin. But no matter how I tried, the fact remained: it was still me and my well-established ideological foundations that made the trip.

Actions are all that matter

The Saga Center in the village of Hvolsvollur explains that the sagas do not indulge in psychological explanations or emotional motivations. Actions are all that matter. Actions are the story. To a North American visitor, however, these tales seem unrelentingly brutal. Visiting any one of the saga centers, even those that are very well done like the Settlement Centre in Borgarnes is about as upbeat as visiting the Holocaust center in New York or any of the actual sites in Germany. Yes it happened, but there is nothing noble or uplifting to the human spirit about the actions at these sites.

The problem with the Icelandic Sagas for a North American visitor is that we’ve been trained to explain all our actions by emotion and psychology. Think how brutal a lot of the Shakespearean canon would be without psychological responses rendered into poetic language. Take the plot of King Lear for example, an old English tale that appeared in Monmouth’s History of the Kings of Britain and later in  Hollinshed’s Chronicles, a tale Shakespeare knew well.

As King Lear grows old he decides to rid himself of official cares by dividing his kingdom amongst his three daughters. When the youngest daughter falters in the ritual he establishes for the hand-off, he banishes her without her share. The other two daughters betray him and force him to roam the land as a homeless, witless old man. The subplot concerns King Lear’s supporter, Gloucester, who has two sons, an evil bastard son and a good natural son. The bastard son Edmund gains power and. through a series of intrigues, Gloucester’s eyes are gouged out on stage. At the end, the evil son is punished and the good son Edgar is reunited with his blind father who ultimately chooses to die with his king. King Lear’s two evil daughters battle it out with his good daughter. In the end, the two evil sisters die by poison and suicide, Cordelia is murdered, and the shock of her death kills Lear.

The bare-bones action of the story doesn’t give us much to admire. However, after Shakespeare has breathed beauty into the language and after he has shown us the psychological motivations within the two families, we can mourn with Lear in his failed plan to retire in comfort. We understand more about ourselves by embracing the metaphor exploring sight and blindness within the two families, which helps us to more clearly see those we love. In the end, we feel that we have been near to greatness and can appreciate a little of it in ourselves. That is NOT how I feel after any level of acquaintance with the Icelandic Sagas.

The Settlement Center in Borgarnes consists of two exhibitions, beautifully constructed of wood, cloth, and metal sculptures. Both are remarkable in their detail and in their emotional power. One focuses on the early settlers of Iceland, detailing the where and the how of their lives. The other exhibition rehearses Egils Saga, whose father was one of the original settlers in Iceland. 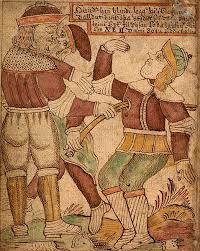 Essentially, the Viking protagonist commits his first murder as a young child, and continues the pattern of thieving and murdering as an adult. He is physically ugly, even deformed, but becomes famous for his beautiful poetry. I recognize that strong contrasts in character traits can create powerful multi-dimensional characters, but without knowing Egils heart or his motivations, his actions show him only to be despicable. My response? I don’t care about Egill Skalla-Grimsson. I wish I had never heard his story.

First off, I have trouble believing that beautiful poetry can emerge from a merciless heart. I admit that without being able to read the old Icelandic original, the poetry may have lost some of its luster in translation. Still, I don’t believe that it’s possible to create world-class literature for the 21st century without considering the psychological structure of characters. The only villains we really care about are those who would be good people if it weren’t for one particular flaw (or series of flaws) that destroys them morally.

What the Icelandic Sagas need

It will take a great artist—perhaps one equal to Shakespeare—to mold the Icelandic sagas into contemporary world-class literature. He or she would need to create the psychological dimensions and emotional dilemmas that would turn these tales of violent actions into stories of villains and heroes with whom a modern reader can deeply connect.

P.S. Now that I’ve written this, I’d like to pose a question for my readers. What Icelandic Saga story have you read, and how did it strike you?