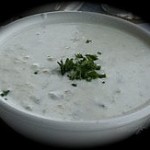 The morning sunshine promised all kinds of fun along the Central Oregon Coast, so we we rolled out of bed early in order to stroll along the beach. Late April in Oregon is still off-season, and we had a vast expanse of sand and sun and breeze all to ourselves. As we walked and taked, I felt the years dissolve between my daughter and me, as though we were simply two good friends who enjoyed each other’s company.

The Sea Lion Caves north of Florence are very stinky and very interesting. Said to be the world’s largest sea cave, the access stairs down a rocky cliff have been replaced by an enclosed elevator. That way you get used to the stink a little before it hits you full-on at sea level. 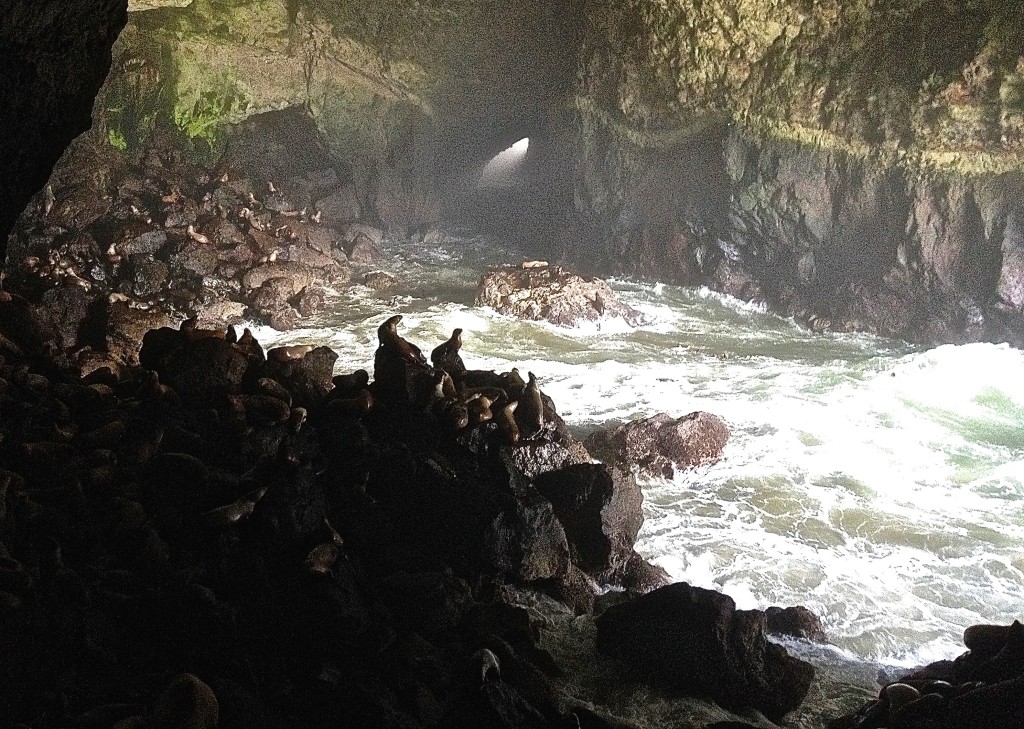 I was a little surprised that the sea lions tolerate as much man-made interference as they do. We enjoyed sighting the sea otters swimming in pods a little ways out in the ocean. They made playing in the waves that crashed on that rocky coast look fun and easy. People would get concussions, so why don’t sea otters? 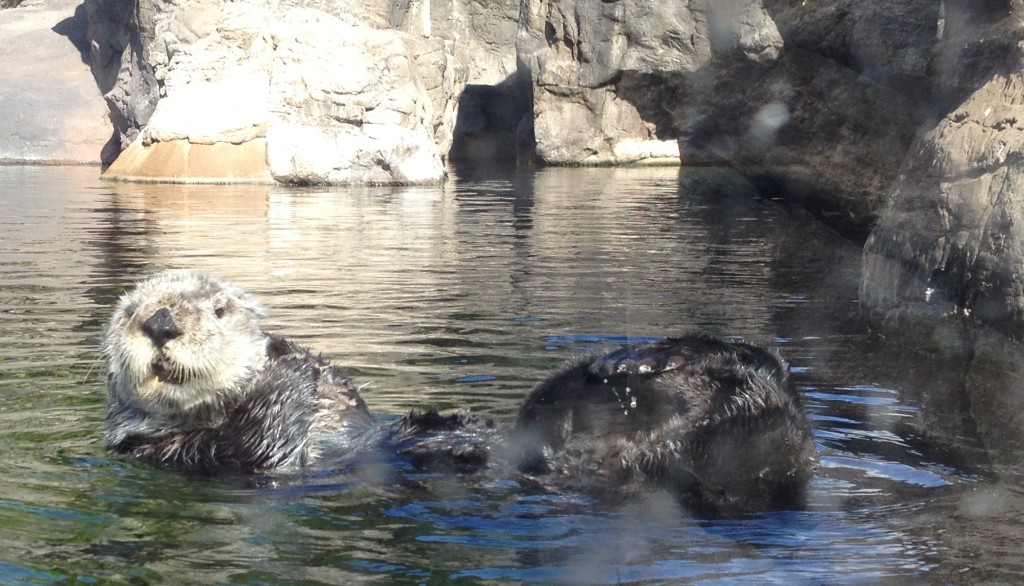 Last night after tasting the delicious clam chowder in Bend, I made a small project for myself. This trip I would try a bowl of clam chowder in a different restaurant each day as we drove up the coast. Today for lunch, we found a quaint little hole-in-the-wall café overlooking the ocean . . . . . whose clam chowder doesn’t need to be mentioned. Perhaps it was just an off day. 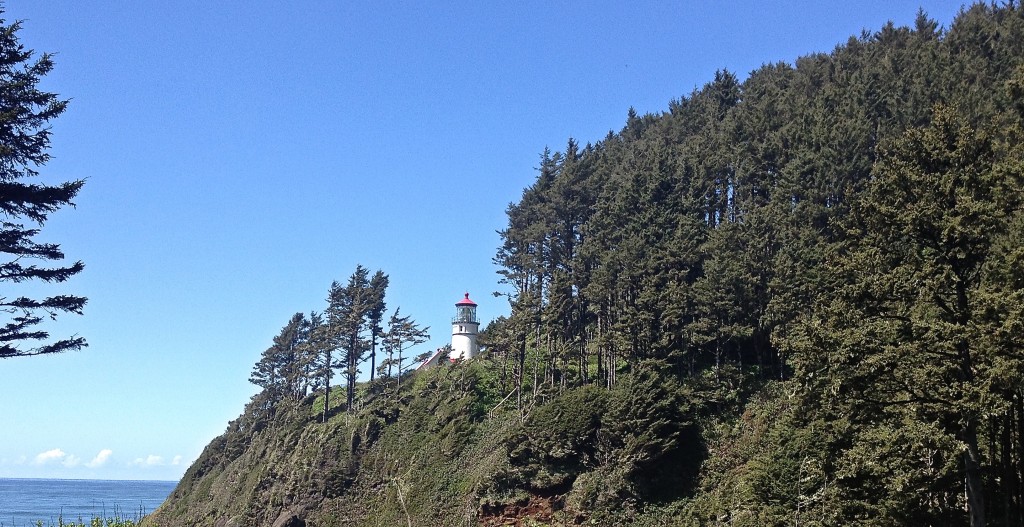 We drove north up the coast to the iconic landmark of Heceta Head Lighthouse. Parking is below, but the hike up is easy. Once there, of course we had to climb the stairs inside the lighthouse to the top. Again we had a very good guide who gave us as much information as most of us were willing to listen to, but I love that sort of thing.

The road down took us past the Keeper’s House, a three-story white frame building which is now used as a Bed & Breakfast. The day we were there, guests had set up easels and were painting on the verandah, a tranquil and splendid setting. 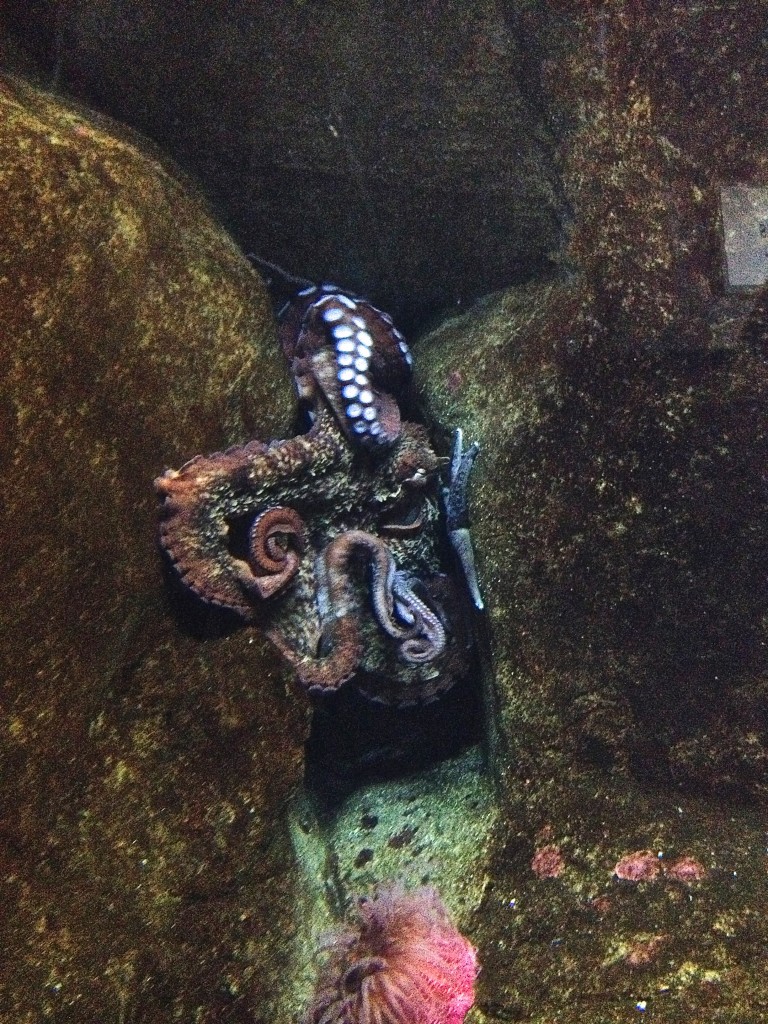 We enjoyed the Oregon Coast Aquarium in Newport, and the guide there again gave us as much information as we could handle. I wish I could retain it all.

But a disconcerting aspect of the town is its abundant signage of what to do in case of a tsunami. Now, I’m glad they care about their citizens. And I’m grateful that tourists who might have no experience or understanding of tsunamis are given such practical instructions. But still, the reminders were unsettling to landlubbers like us, and we spent a spooky amount of time looking over our shoulders for giant waves.

We made it out of town with no tsunami on our tail and headed for Lincoln City. As the day closed I looked forward to a really good cup of clam chowder, a steamy bath, and a good solid sleep.

Then we found out the hotel where we thought we had reservations had erroneously been booked for the previous night. We were flabbergasted. [I think that’s a strange word. In this context it means that two tourists were standing stock still in front of a hotel desk, looking displaced and finding no words to express their confusion.]

The hotel was full that night, but the front desk clerk took pity on us and said that she would refund our money because the hotel had not sold out the night before and it was obviously an honest mistake on our part. I came to my tired senses and thanked her profusely.

Than she looked up with startled eyes and said, “Oh, I see you booked through Hotels.com. I’m afraid you’ll have to take it up with them.”

My heart sank. I had tried to contact a similar company, Expedia.com, over another event with complete lack of success. The employees are trained to apologize profusely for the client’s frustration and to repeat indefinitely their inability to resolve the problem. I suspected I was in for another such struggle.

When the trip was over and I began my phone calls to Hotels.com, a refund turned out to be a totally fruitless project. I will not do business with either of those companies again. I prefer to go directly to the hotel itself. They’re all listed Online by city anyway. I’ve found lovely rooms in hotels that Expedia.com and Hotels.com said were sold out at prices that were lower than the prices Expedia and Hotels had set.

But overnight turned out happily after all because we found the Captain Cook Inn. It didn’t look like much when we first drove up, but our room was spotless, the beds new and comfortable, and we slept on real down pillows. I’ll go back some day, and in the meantime I’d recommend it to anyone.