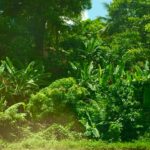 To celebrate the fourth of July in the Dominican Republic, we joined friends who staged an indoor “picnic.” (Have to alter the definition of the word picnic here.) Of course, if we had been in the U.S., we would likely have attended a barbecue and watched fireworks without thinking much about the reason for the Fourth. But because we are far away from home, we felt very aware of the many things we take for granted at home.

One member of the group provided a formal little program complete with a patriotic sermon. In this election year, so fraught with divisive words and actions, I felt unusually tender towards his sentiments.

As things turn out, my first assignment in the Dominican Republic has to do with music. My humanitarian organization wants to stage a large musical event during the Christmas season of 2017 and asked me to help find the available music people on the island. I began by hitching a ride with a friend to Santiago, located in the northwestern part of the island, to make appropriate contacts there.

Road from Santo Domingo to Santiago

The drive took us through the tropical vegetation we’ve been enjoying in Santo Domingo. As we gained elevation, the topography became hillier with beautiful valleys. Finally mountains arose against misty vistas. We didn’t have time to stop for the photo-ops I wanted. After all, I was hitching a ride. I snatched those included here from a car window at sixty miles an hour. Of the twenty photos on my I-phone, I’m amazed even one of them turned out.

Google Maps does not know all

I confess that at times this week I started thinking about my nice life at home. One afternoon we spent 5½ hours standing in seven different lines to obtain a DR driver license. The next day we made the most unfortunate decision to make a grocery store run after a long day at the office. Google Maps estimated a 7-minute drive. Not so. Google doesn’t always get the one-way streets right. While it took us only fifteen minutes to drive there, by the time we left the store, the traffic was snarled and honking. Stuck in such massive congestion, it took us over an hour to drive the few blocks home. I was thrilled to finally reach our apartment.

Henceforth and forever, only stark hunger can force me to drive between 5 and 7 pm.