Exploring the many pleasures of Bainbridge Island included attending the musical, Peter Pan, as produced by Kitsap Forest Theater. It began raining lightly in the parking lot, but the trees protected us for the most part as we walked down the trail to the outdoor staging area. During this beautiful 10-minute hike through the woods, we passed various evidences of the life of the characters in the play. A bouquet of tiger lilies for Tiger Lily, a wanted poster detailing Captain Hook’s character flaws, and a list of rules the Lost Boys must follow. No sooner did we arrive at the clearing where the theater seats are carved into the hillside, but the rain began to fall in earnest. 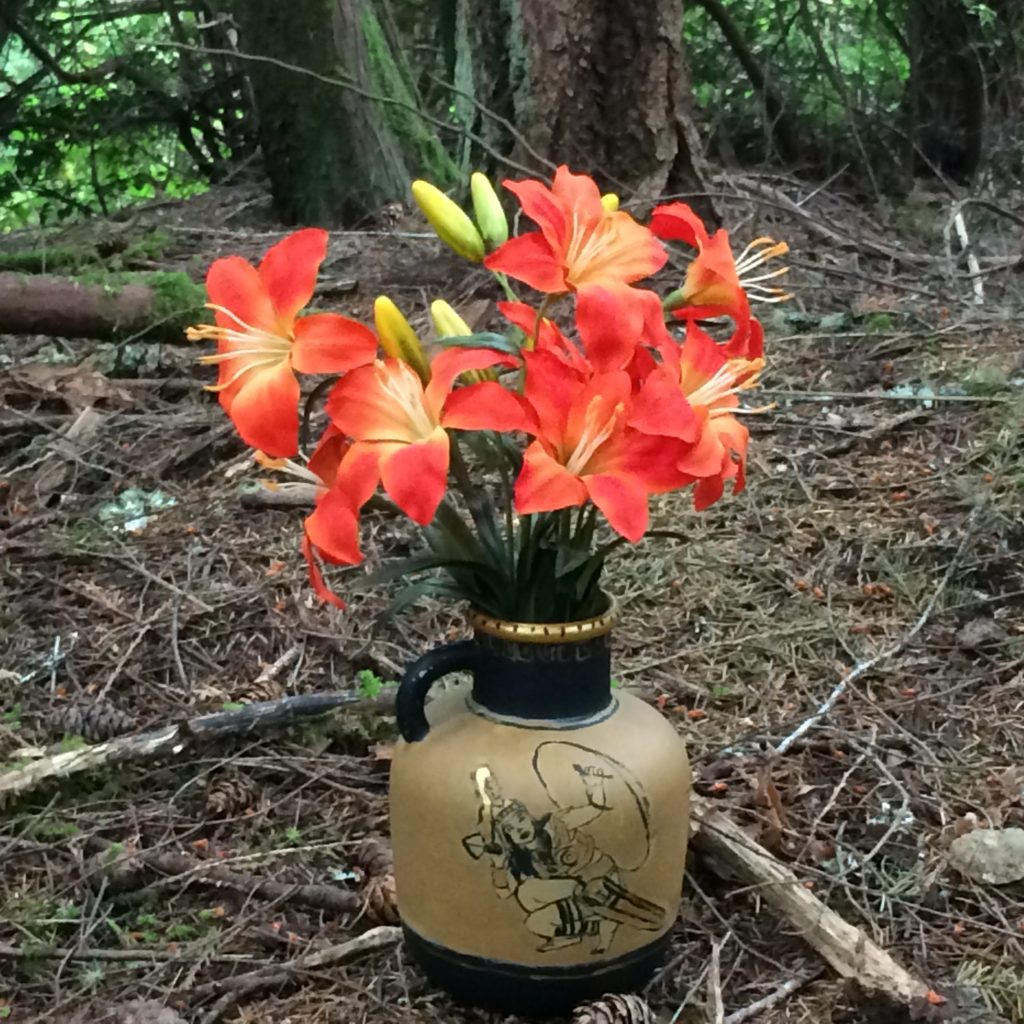 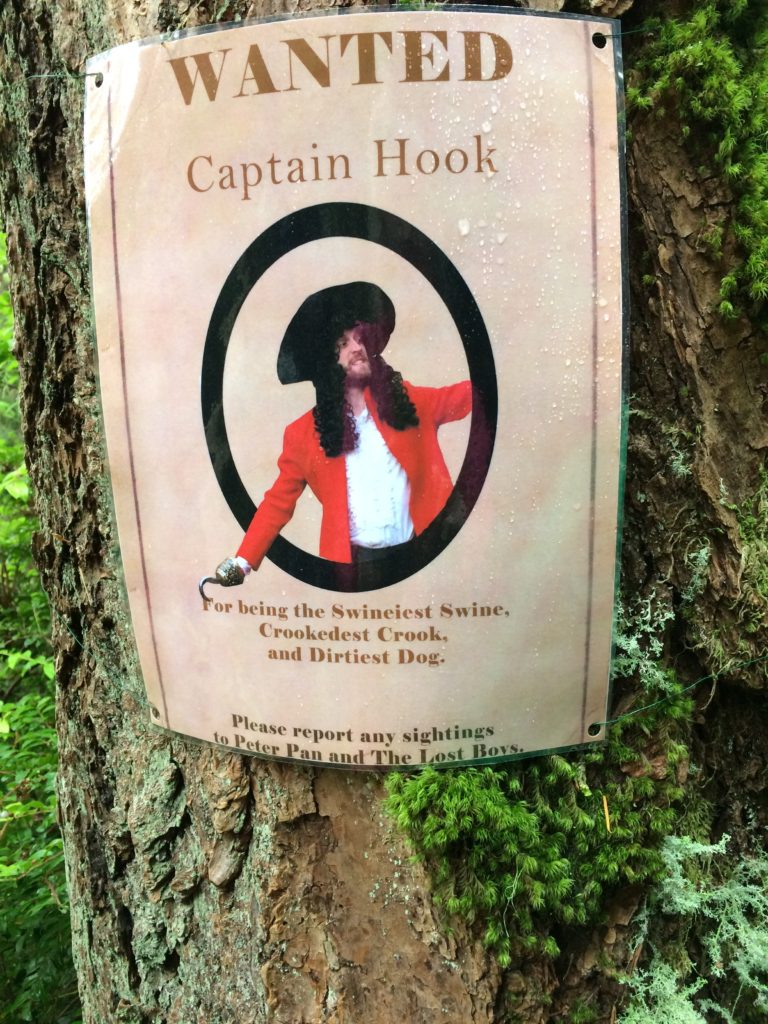 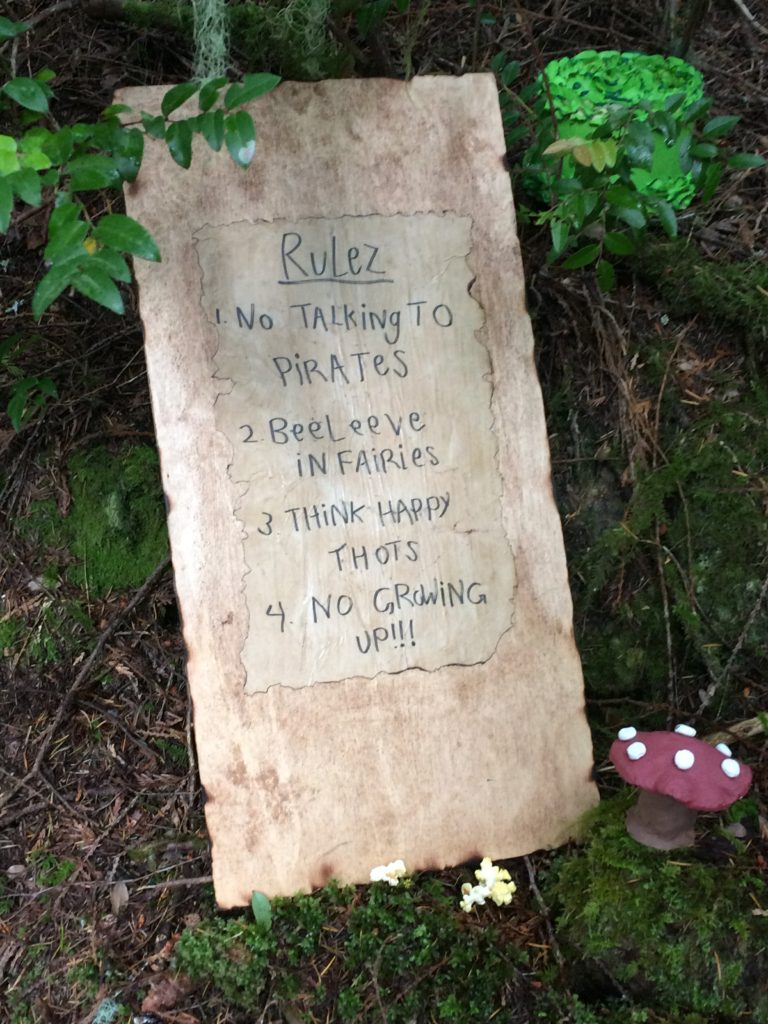 Rules for the Lost Boys

We had two umbrellas—one for our heads and one for our knees. We wore rain jackets, and the theater handed out 33-gallon black trash bags, which we laid across our laps above the umbrella. My friend wore three layers and felt comfortable; I wore one layer and felt chilled to the bone by intermission. Proving, once again, the adage that “There is no bad weather, just inappropriate clothing.”

The actors kept on going, no matter. When Wendy gets shot with an arrow and falls flat on her back upon arrival in Never-land, her white nightgown became black and soggy from the mountain soil. But she kept right on and played her character well.

Peter Pan was limber and energetic. Traditionally played by a young female, this actress has a gorgeous voice that can handle coloratura style as well as belt out the tunes. The pre-taped piano and orchestral recording lacked the polish and accuracy of the pros, but it was less noticeable once the singers entered.

The pirates were wonderful bad ‘uns the whole audience loved to jeer. All in all, we enjoyed our theater in the rain experience. 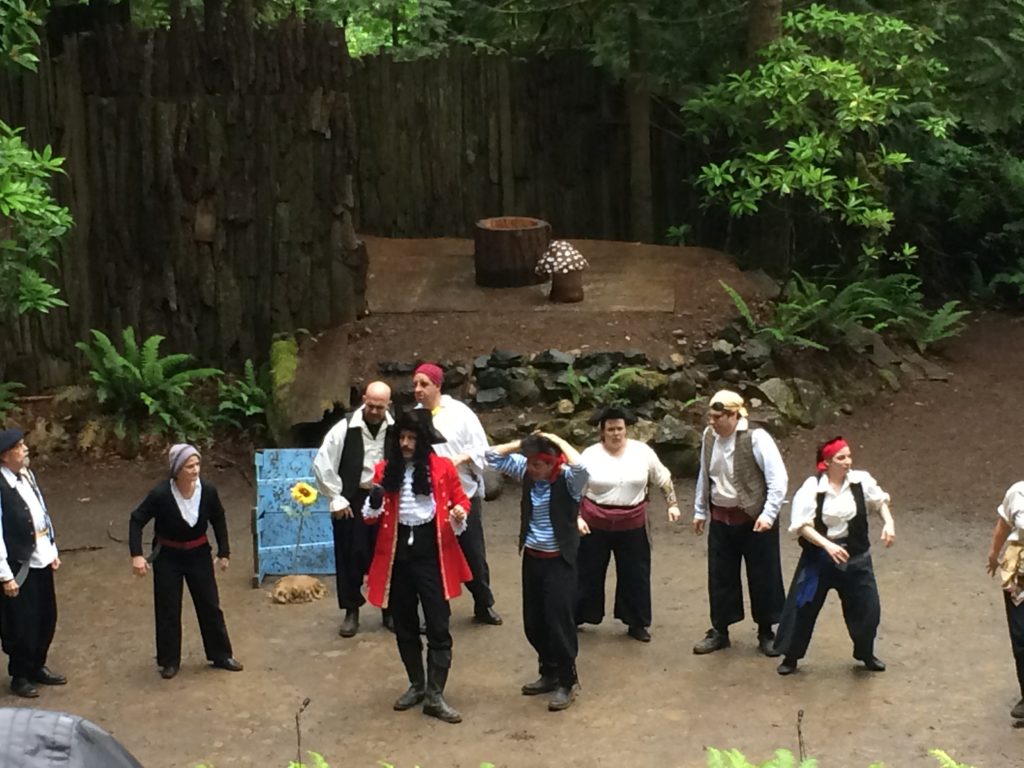 We tried to see the Bainbridge Island Museum of Art several times. The first day happened to be the Friday of the gala where donors are wined and dined, so all but one exhibit was closed. The little room housing the art of book making exhibit had interesting and very beautiful specimens, which we enjoyed. We came back again Sunday, but the exhibits were still not in place. Maybe next time!

In the days before I left home for this road trip, I did a whole lot of gardening. I was a little stiff after driving twelve hours the first day, but a good sleep or two didn’t cure it like I expected. My symptoms grew worse and worse until by the third day, I could hardly walk. One of the perks of perusing the local paper, however, is finding the help you need! I immediately phoned the office of Dr. Alex Kraft at Trillium Natural Medicine, who agreed to see me on fairly short notice.

My first encounter with acupuncture at a military hospital in Qingdao, PRC, years ago was worlds apart from my Dr. Kraft experience. He was so skilled that I became very dozy on the table and drifted off to sleep at one point. When I left his office the pain was nearly gone and I could walk normally. He cautioned me that the effects would not last, however. In fact, the slight discomfort that emerged the next morning was nothing compared to how I felt before the acupuncture. He made all the difference and probably won’t ever know it.