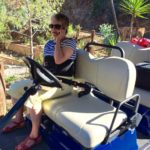 To have the most fun on Santa Catalina, you need to drive a golf cart around Avalon. All it takes is a little courage and your driver license. The first day on the island we took the 50 minute Avalon Scenic Tour hoping to orient ourselves optimally for the remainder of our stay. The bus was large, old, and smelly, with a lot of people on board. But a very informative guide made it quite interesting.

Drive a Golf Cart Around Avalon

If I had to do it again, though, I’d study up on Avalon’s history a little on my own and then rent a golf cart for a self-guided tour. So that’s exactly what we did our second day on the island. We took a bottle of water, a few snacks, and sun gear. I was worried that the cart might jostle my traveling companion too much. She was newly convalescent from a spinal fusion, so I insisted she wear her brace.

After a quick breakfast, we set out, hoping that the earlier we began in the morning the less traffic we’d encounter. You can tell the sun wasn’t very high in the sky because of the shadows on one side of this huge rock compared to the illumination on the other side. I loved the seemingly limitless ocean views. 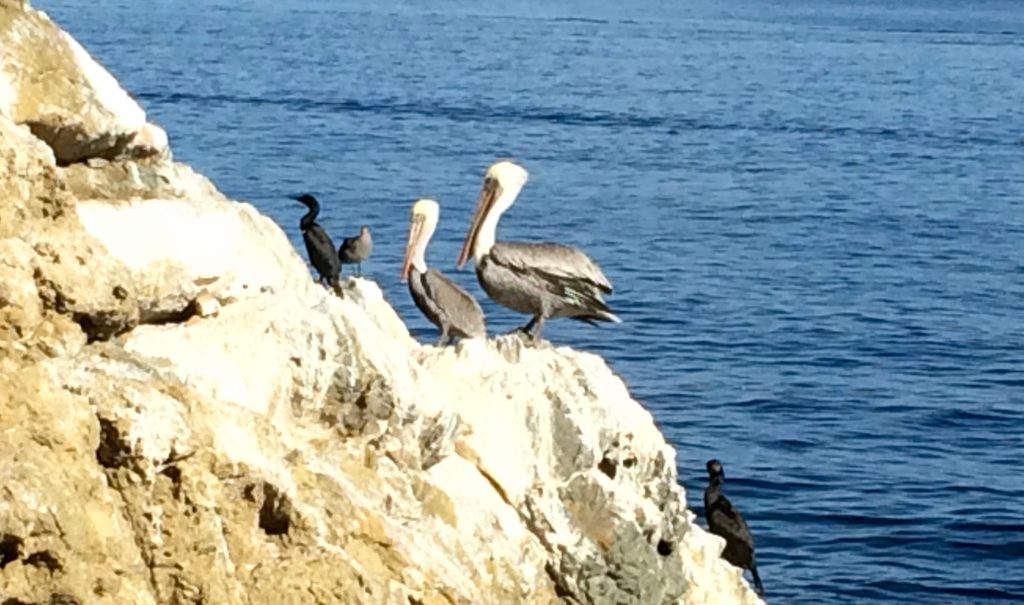 Sunny side of the rock 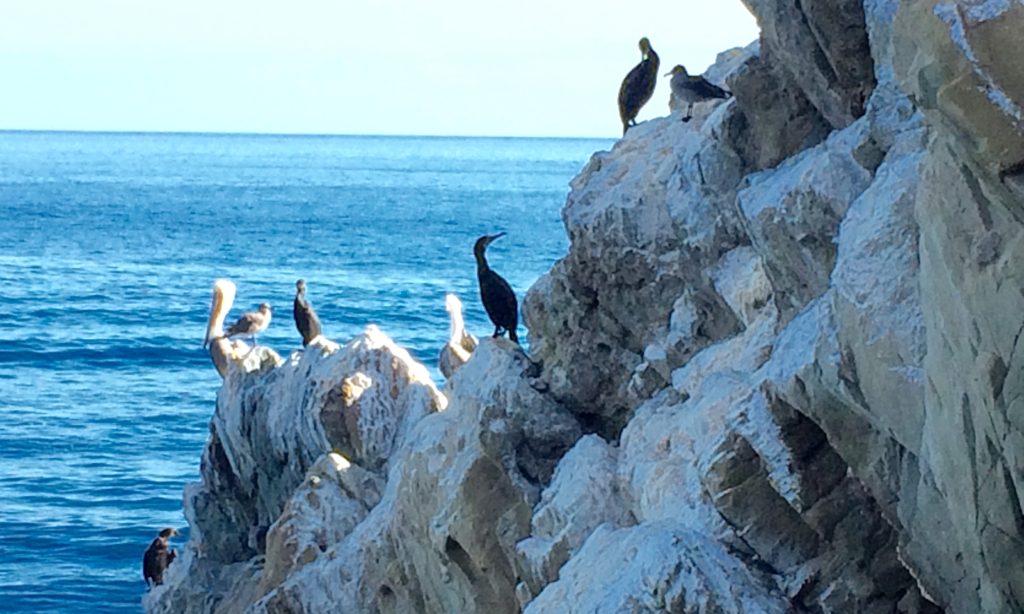 Shady side of the rock

At first we worried that we were so small that the buses would squash us. But the drivers were careful around us and there were only a few of them that morning. The views of Avalon Bay from the top were quite dramatic.

View from the top

We had hoped to see the famous underwater kelp beds, but the increase in water temperature caused by El Nino has pretty much destroyed them. Even so, a glass bottom boat makes for an enjoyable pastime, one that family members of any age can enjoy. On our boat we had everything from babies to the very aged. The boat ensures its patrons a view of the fish in the harbor by feeding them. At first a few brightly colored fish followed us, but soon the water was dark and thrashing with larger fish.

We also saw a sea turtle, which was very exciting. Despite my fifty-two photos of fish in the blue sea, I missed the turtle — so I can’t give you any proof he was there! 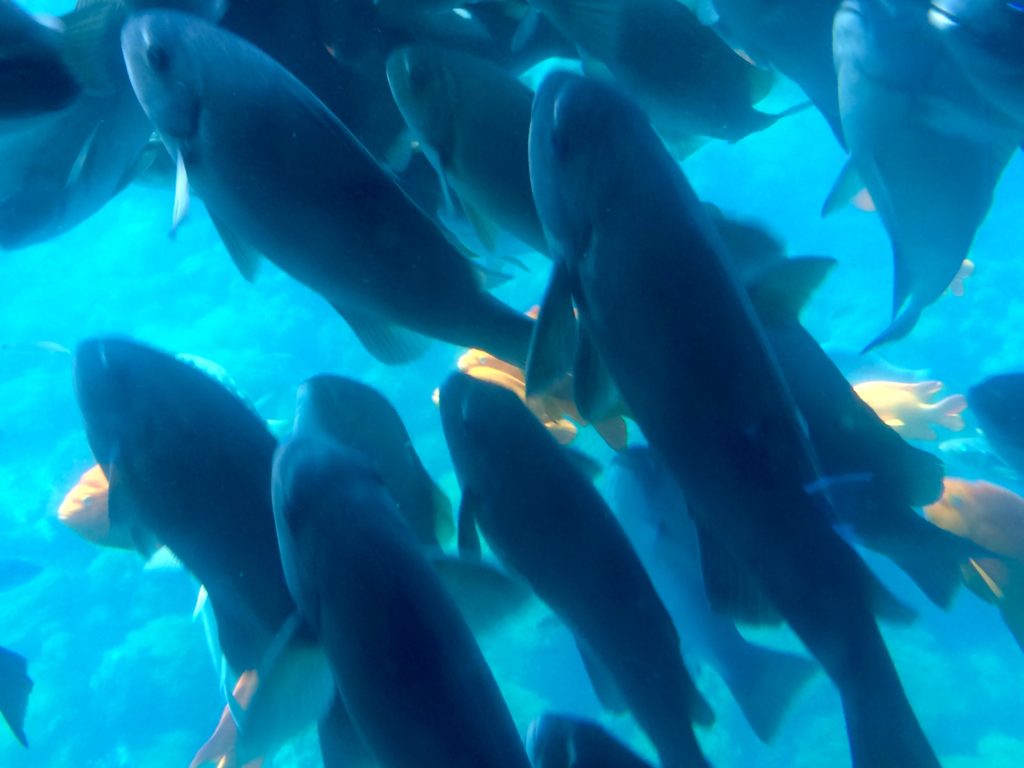 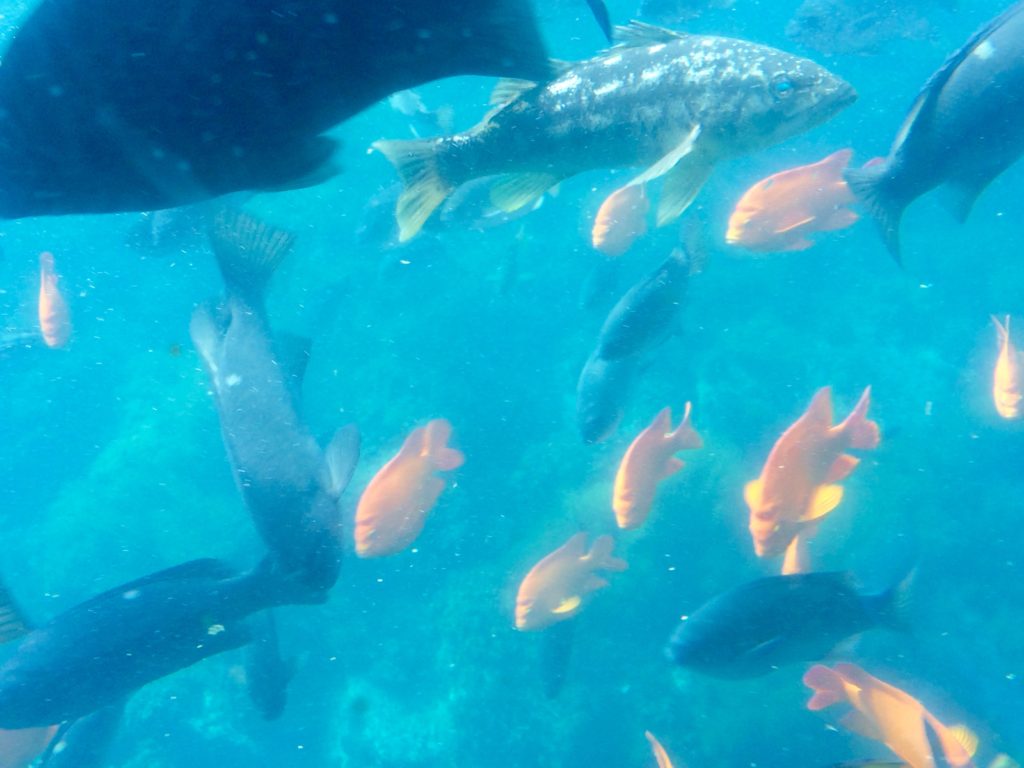 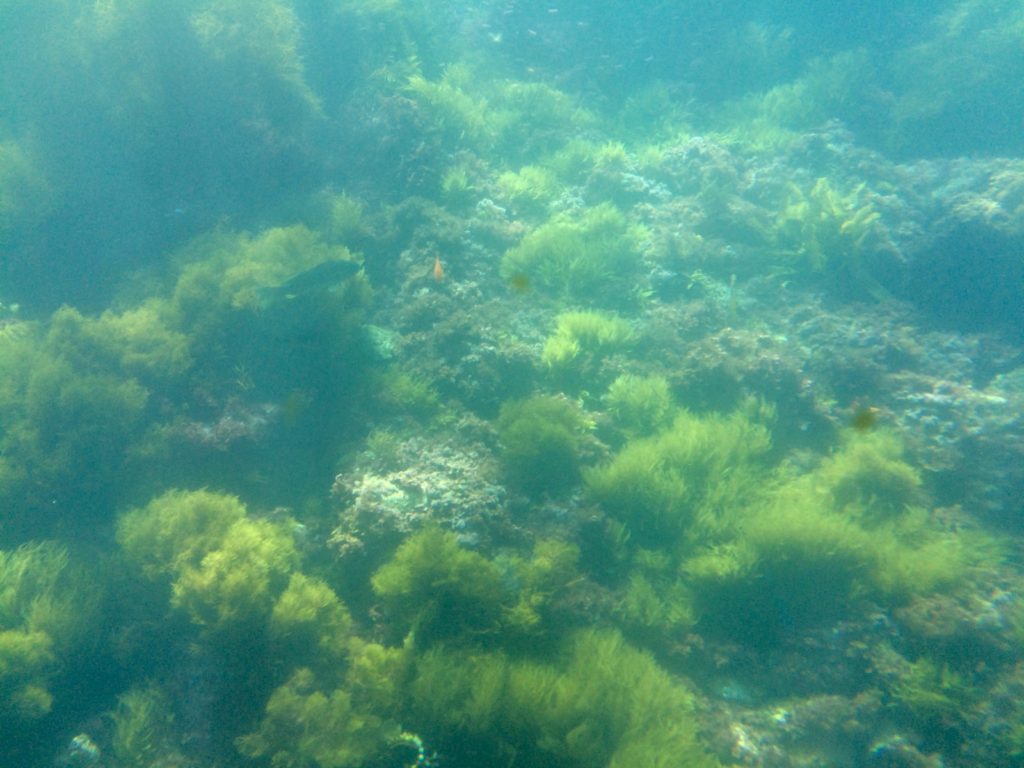 View from a glass-bottom boat

Part of the mystique I have always felt surrounding Santa Catalina may be as simple as palm trees and ocean views. These sights seemed highly exotic compared to the pine trees and grasslands I knew as a child. A very dry island, we found as much desert foliage as tropical even under the palm trees. The interior of the island is unremittingly dry with a moderately good road. We’d signed up for an excursion called Inland Expedition to see it, but the trip was cancelled on very short notice. Apparently all traffic to the interior was banned due to the fire hazard caused by the drought. 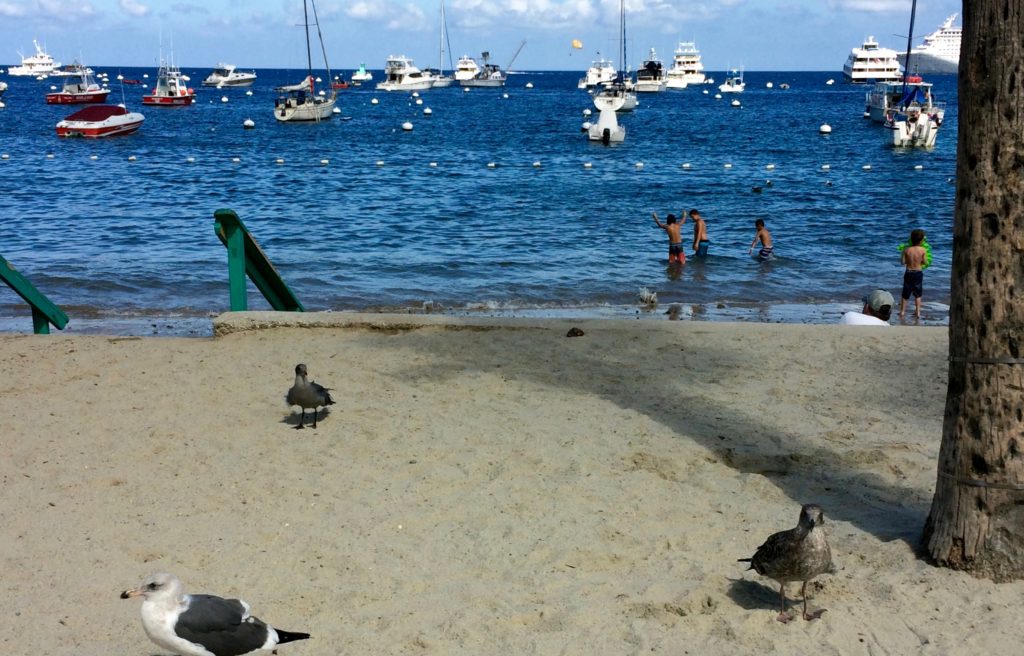 The harbor beach along Avalon Bay where the ships dock isn’t really much of a draw in terms of sandy loveliness these days, if it ever was. There simply isn’t very much of it. But the bay is full of boats and always striking. A cruise ship brought throngs of visitors on one of the days we were there, which distinctly changed the tenor of the town. The added bustle contrasted sharply with the ambience of the day before.

The restaurants played golden oldies from various eras. During just one lunch we heard “Sailing Away,” Nat King Cole’s “Mona Lisa,” Louis Armstrong’s “Hello Dolly,” a lot of Frank Sinatra, big band songs, ABBA, but nothing grittier than soft rock. At the same time a banner flew over main street inviting one and all to a triathlon event the city would soon host. 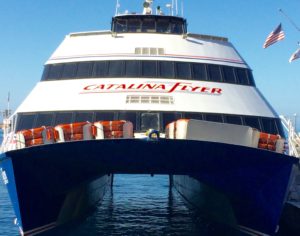 Our whole experience in Avalon showed  us a town capitalizing on its nostalgic past, yet earnestly seeking a continued place in the sun. At best that’s a tough combination to pull off. I hope they can.

I sometimes wonder if I should write about a popular destination that millions of people already know about. Maybe I should be traveling to remote places like deserts and mountain tops for my subject matter, not Southern California which is home to so many millions. But here’s a truth I’ve learned: wherever you live is common; wherever you visit is exotic.

All these years later, Santa Catalina still seems exotic to me, with white boats bobbing in an incredible blue sea. We weren’t ready to leave when it was time to catch the catamaran back to the mainland.