I learned via a dark sky and scavenger hunt in Canmore that there’s no quicker way to learn the secrets of a town. 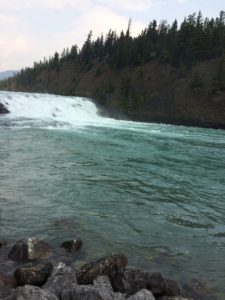 In all the years I lived in Alberta, Canmore was merely a road sign on the way from Calgary to Banff National Park. Never once had it been a place to stop. But after spending a rainy Sunday morning in Banff, I realized that it had long ago hit its visitor limits. In August, the town site was so plugged with tourists that for me, the ambience of the area was utterly destroyed.

Years ago I had attended the Banff School of Fine Arts (now called Banff Centre) and studied piano repertoire. These were the days of Boris Roubakine and Gwen Beamish, when they jokingly promised that our farewell party for the summer would involve throwing all our Schirmer editions into Bow Falls.

I had walked the town back and forth; I knew it inside out. I learned to ski in Banff, I fell in love in Banff, I discovered independence in Banff. Despite all of those long-time connections, it felt like I was fleeing Banff this summer as we headed east on the Trans-Canada Highway.

Canmore – one of the loveliest spots on Earth

We had rented a condo for a couple of days in Canmore simply because of its proximity to Calgary where a family wedding was in the offing. Since I didn’t know Canmore at all, we went directly to the Visitor’s Centre to find out activities for our leisure day in town. We learned that Canmore offers similar mountain beauty to Banff, with similar activities. Hiking and boating in the summer as well as skiing in the Kananaskis all winter—just fewer crowds. Truly Canmore has to be one of the loveliest spots on Earth.

The rain in Banff the day before had not extended eastward past town limits, I’m quite sure, but somehow it must have helped to clean the air that passed over Canmore that night. So, during our morning walk along the Bow River that runs through Canmore, we were treated to clear views of the mountain tops. The walk we chose had no elevation gain, but the one we actually took wasn’t the one on the map. Who knows where we went, but no mind—we were continually surrounded by beautiful mountains. 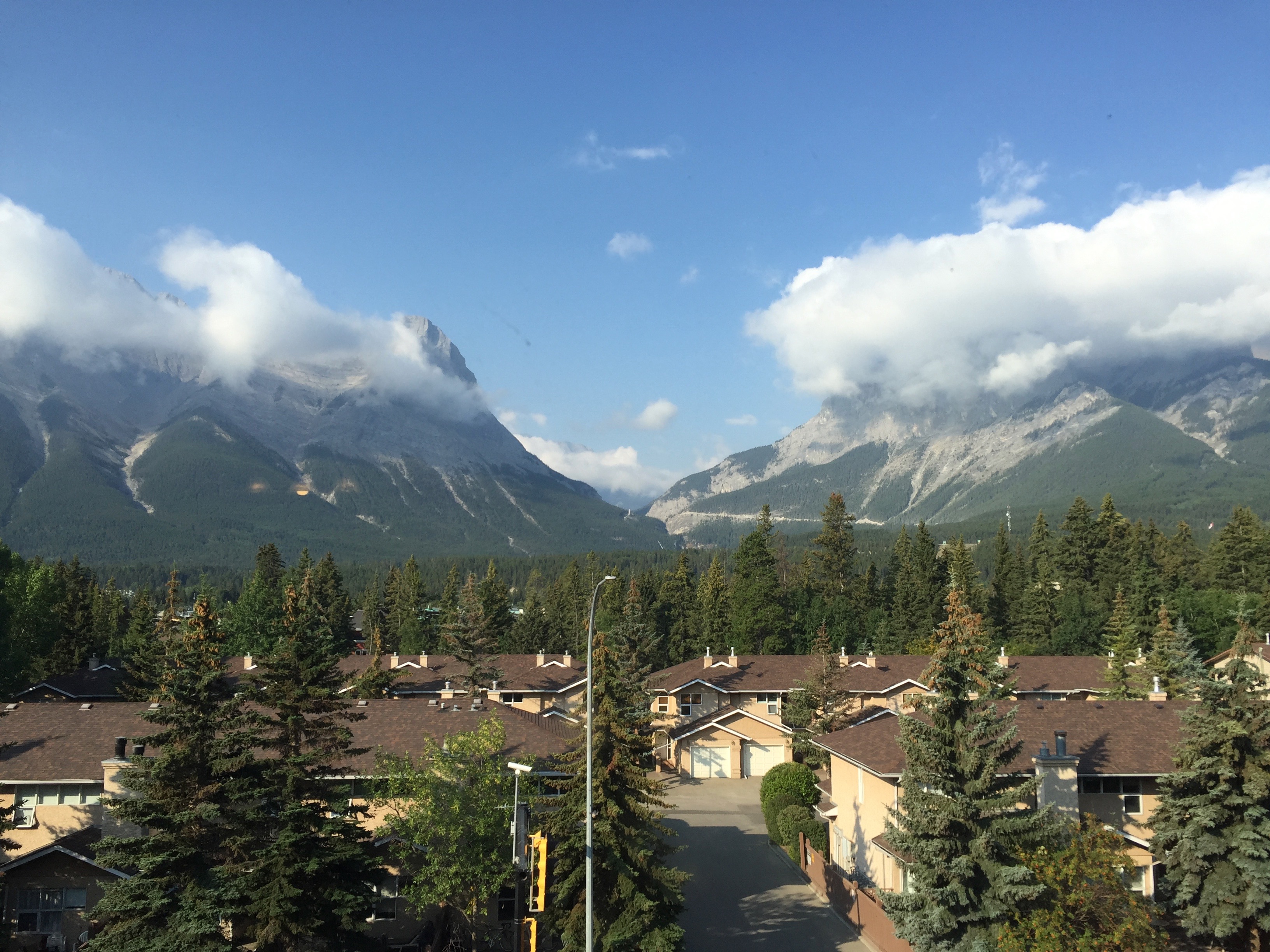 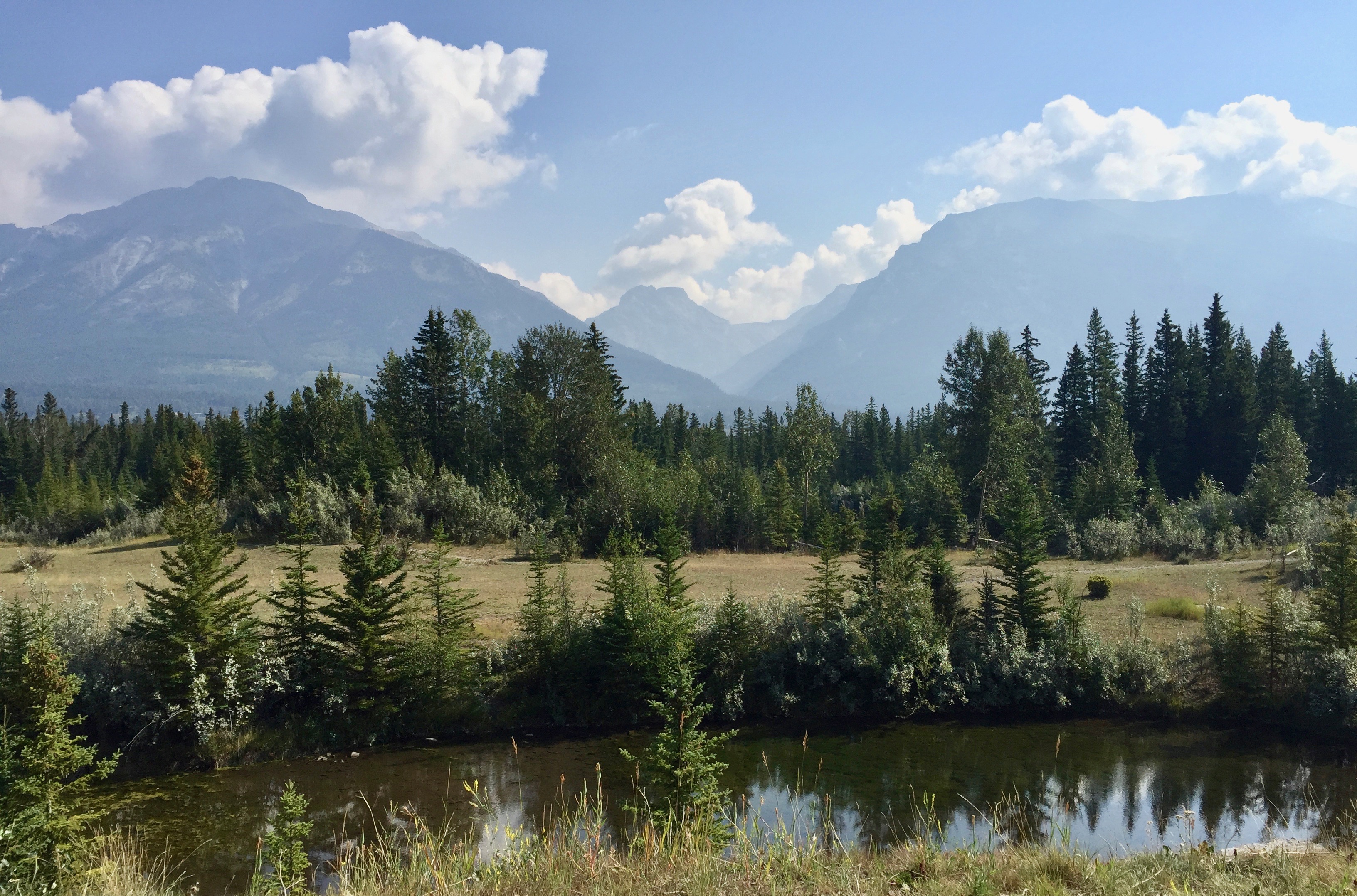 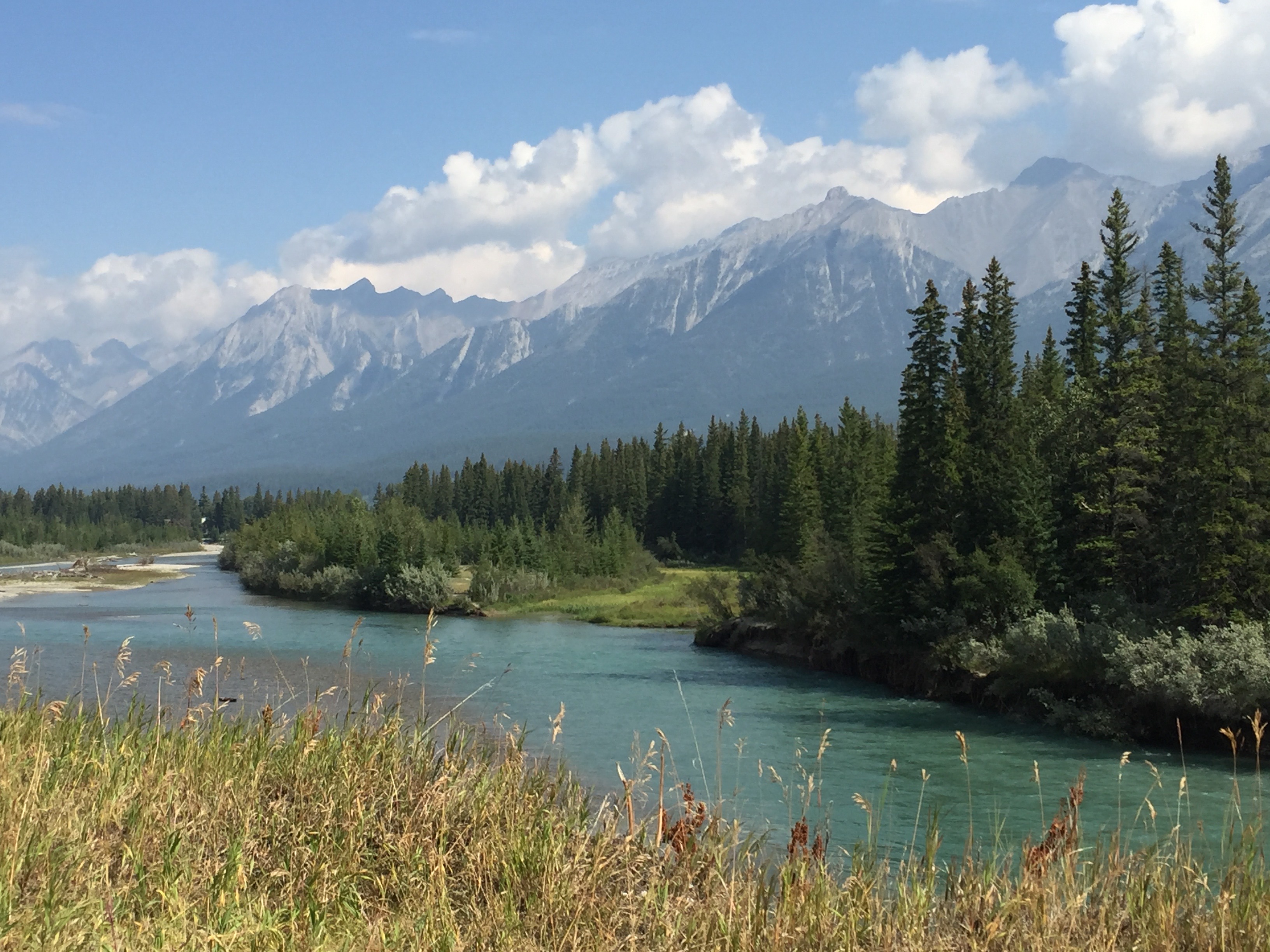 Along the Bow River, Canmore

As the day wore on, however, forest-fire smoke began to accumulate in the basin where the town is located. 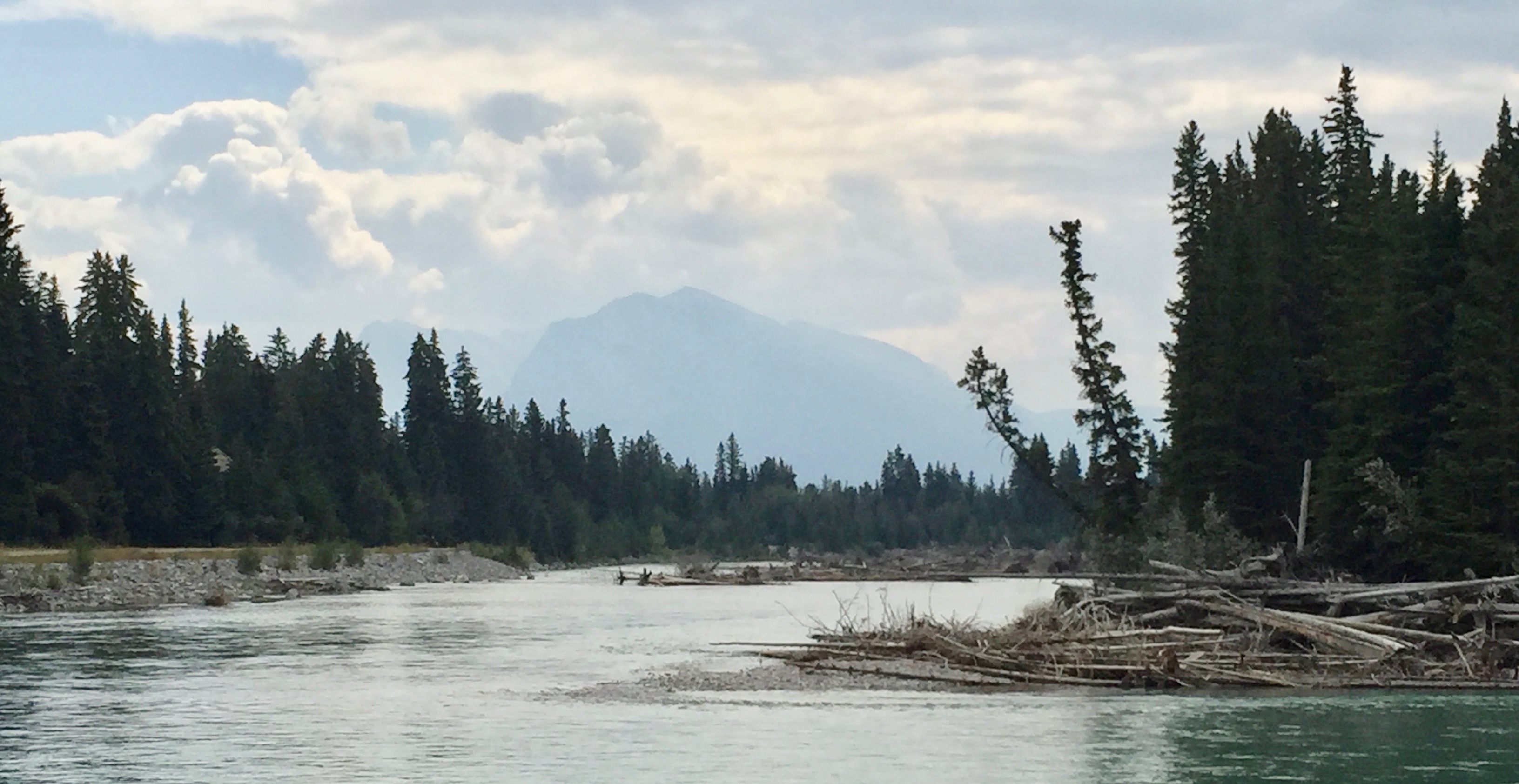 Forest-fire air from BC

Incidentally, I read that the name of Canmore comes from the Anglicized version of the Gaelic phrase, Caenn Mor, meaning “big head” or “great leader.” This referenced an 1883 railroad depot built on the site, with a large round house, extensive sidings, fuel storage, and water tower. For the next century, coal mining became the town’s biggest industry. Now, the biggest industry is tourism.

Getting-to-know-your-town via a scavenger hunt

After lunch we set out for a clue-solving adventure invented by a local company called Mystery Town Tours. In the past, whenever I would make a couple of wrong turns that sent us crazily in the wrong direction, and even when we’re frankly and utterly lost in a town, my friend and I try to laugh and reassure each other by saying, “Getting to know our town!” Then we study the GPS more carefully and sort it out. So, the idea that we could go on a scavenger hunt of Canmore that would be “getting to know your town” on foot really appealed to us.

The company hosts several of these tours in five western Canadian cities: Canmore, Calgary, and Edmonton in Alberta; Vancouver and Victoria in British Columbia. They advise dividing a large group into teams of no more that 2 to 4 people and suggest that if you enjoy satisfying your competitive urge, you can compete with other groups and register your time via an Online leader board.

Long ago I lost most of my competitive game corpuscles during Christmas board game bashes, so the leader board held no temptation. Finishing was our only goal. We chose the adventure entitled Smuggler’s Blues that had us hunting for names of famous people in Canmore’s history from all walks of life. I had down-loaded the app on my phone, which sent one clue after another sequentially, twenty times all totaled. Our starting point was the Canmore Civic Centre. 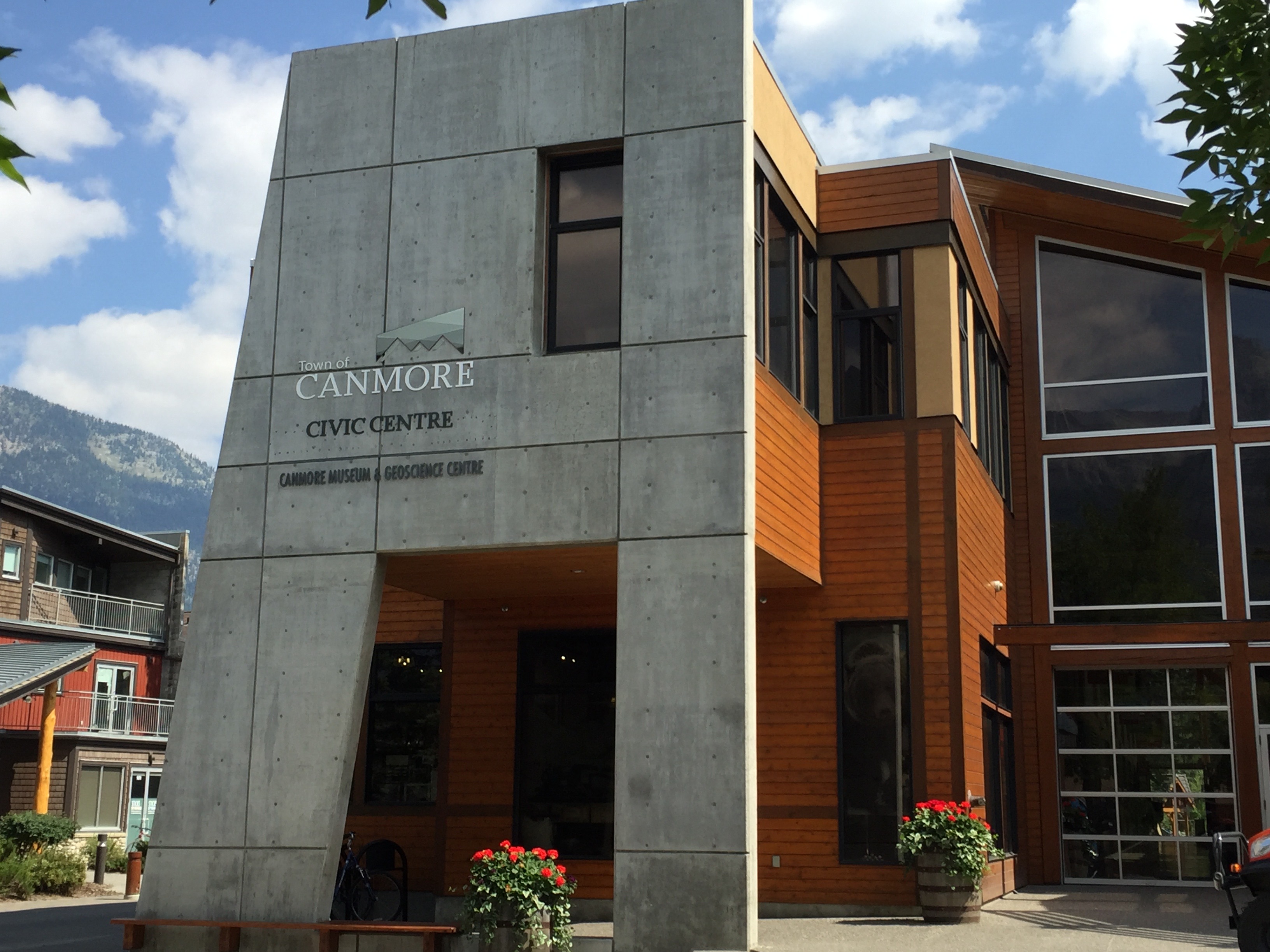 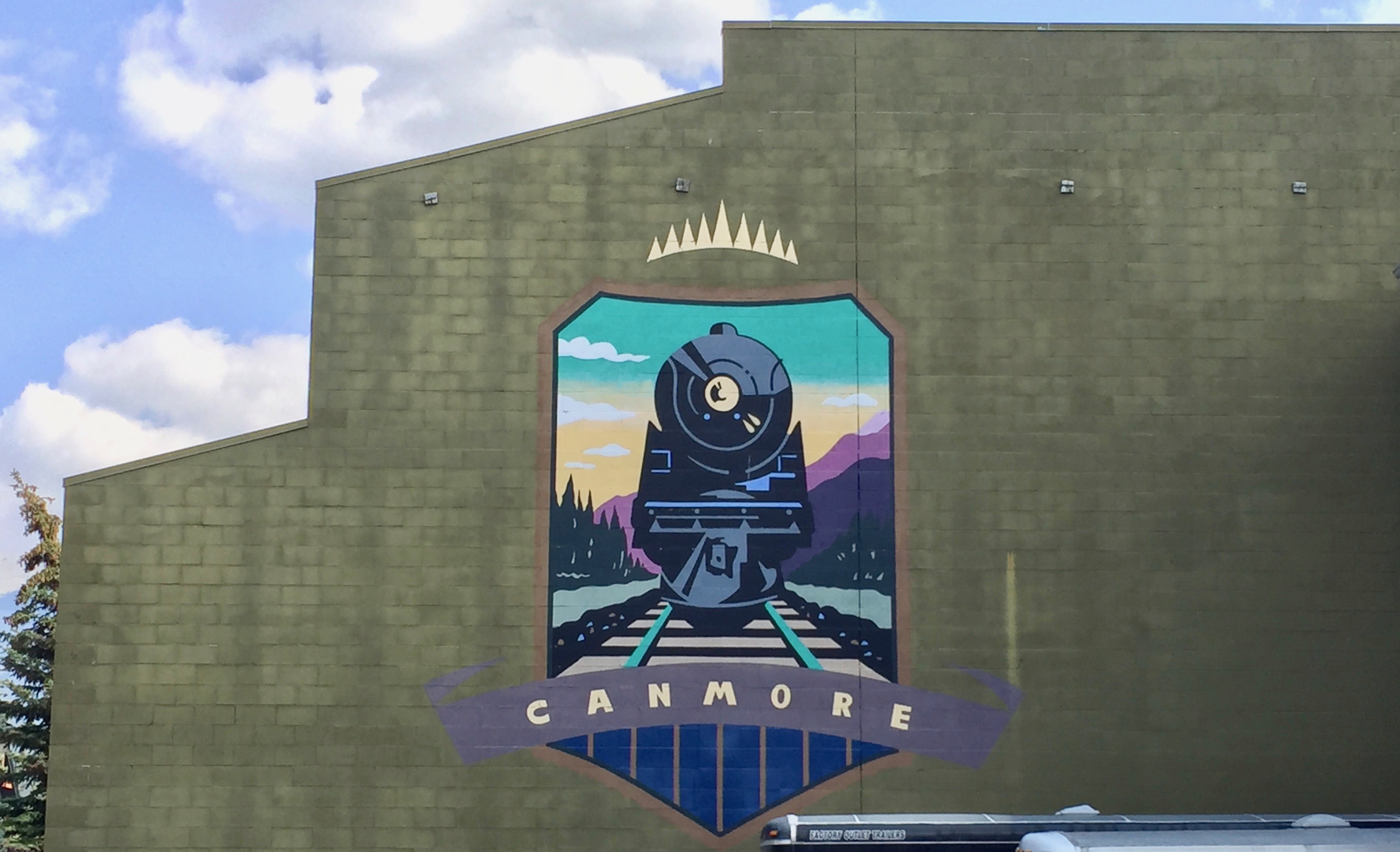 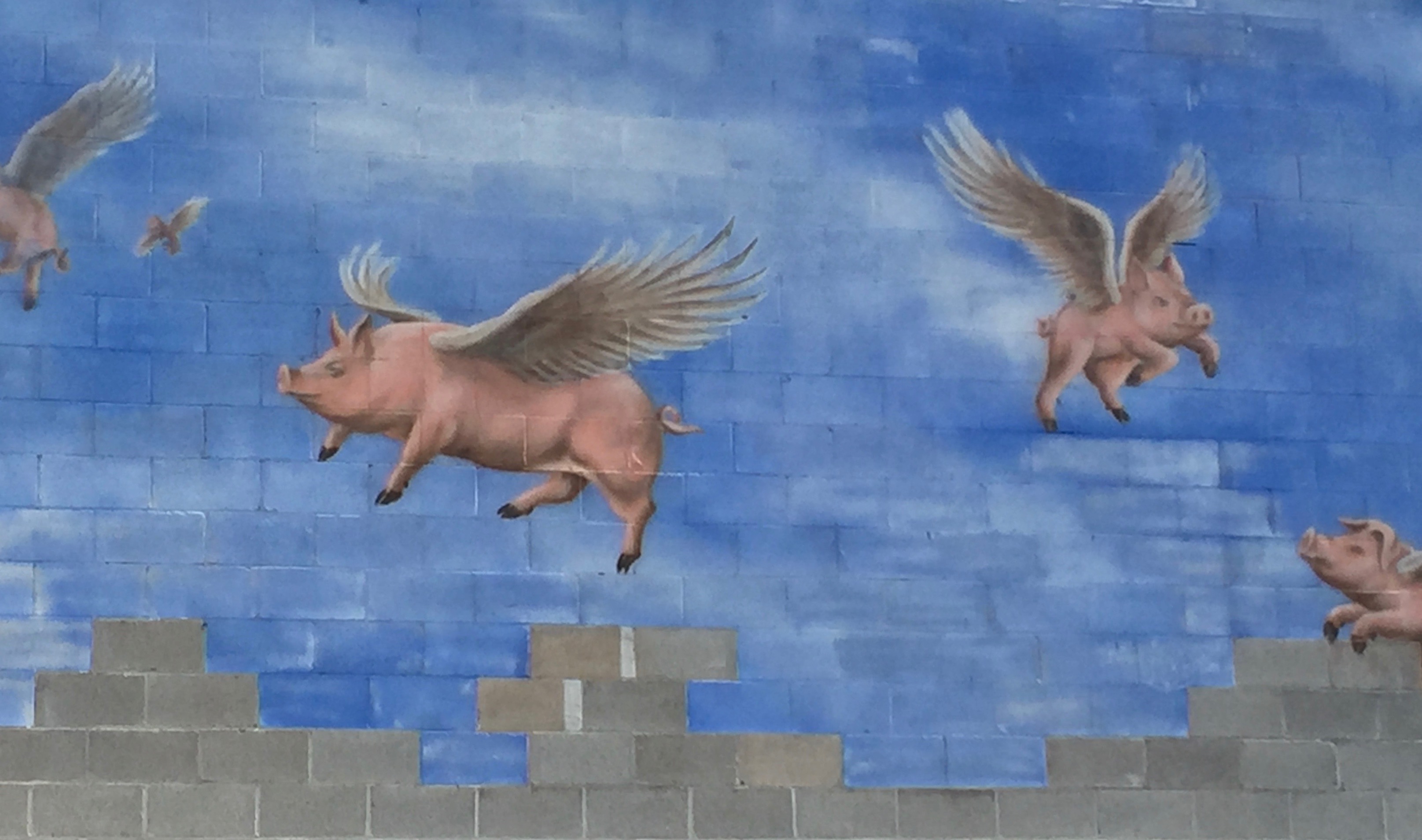 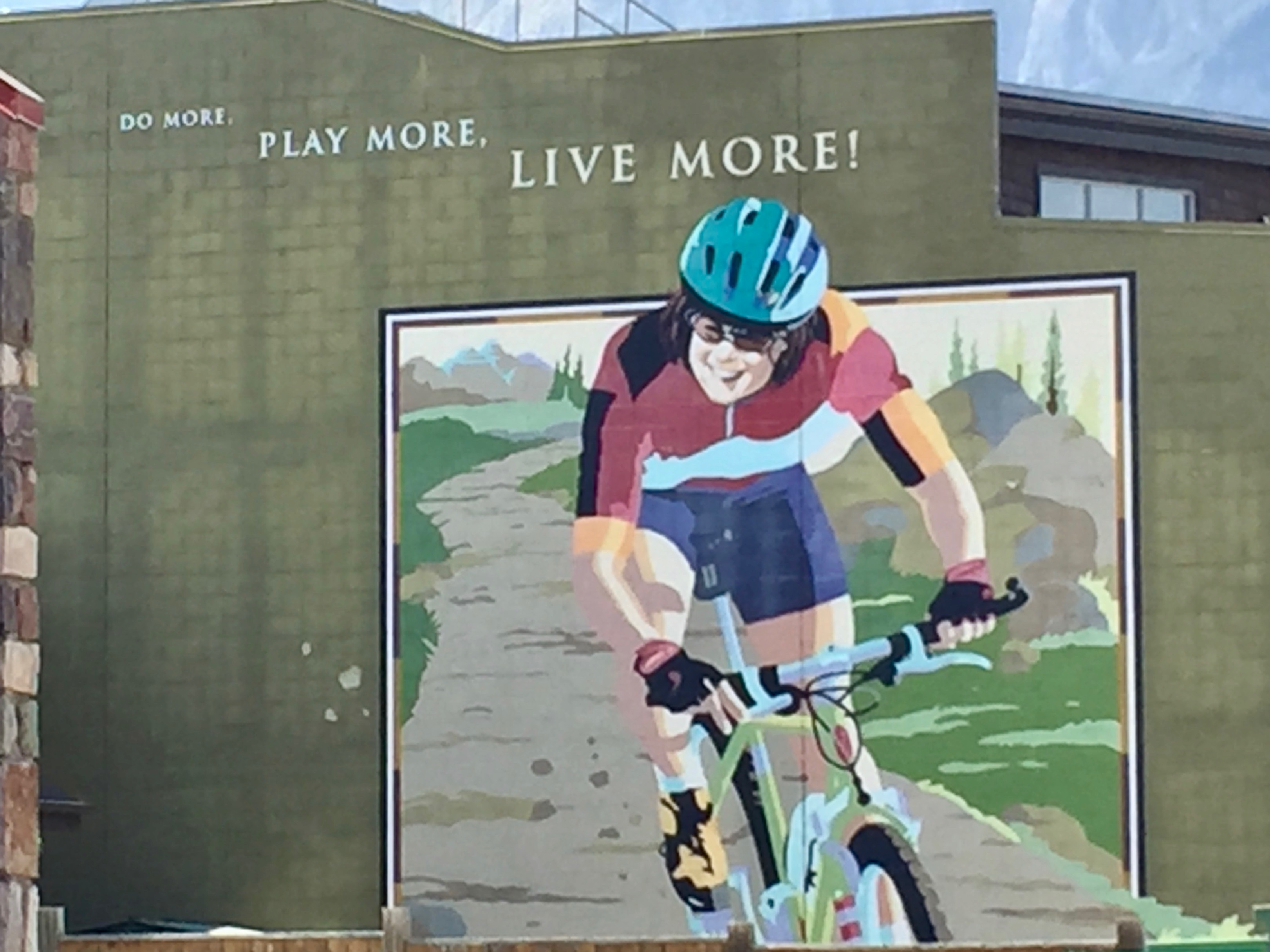 The game was listed as doable in 1.5 to 2 hours. Well . . . Maybe thirty years ago it would have been! It took us closer to four hours. But we completed it!

We sat down on every bench that came our way, and we were utterly lost once (or maybe thrice, depending on how you count it). We took several hundred photos (combined), and I really do feel like we got to know Canmore. Afterwards (in the absence of bands playing and international media coverage of the event) we congratulated ourselves over excellent sandwiches at the Hogshead downtown.

But one more thrill awaited us that day. For sure it wasn’t catching up on U.S. TV news at the condo, which tends to range from disheartening to downright alarming these days. It happened afterwards as the sky was deepening into dusk. We took our TV-watching blood pressure spike for a soak in the hot tub located on the open-air rooftop of the condo.

As I soaked, the chill air from the Rocky Mountains wafted across my face. Simply a divine sensation. The stars in a dark sky made me long to return to Alberta. I need a place of my own in Canmore!

9 thoughts on “Dark Sky and Scavenger Hunt in Canmore”