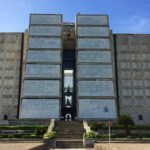 The Columbus Lighthouse is not a lighthouse in the accustomed sense of the term. Because the monument is named Faro a Colon, I had assumed it would be an actual beacon for sea-going vessels located on a rocky outcropping on the shoreline. Not so. The building is located inland, has nothing to do with the safety of ships, and in actual fact its light is rarely lit. Apparently the beam is very powerful, visible as far away as Puerto Rico. But the light is very expensive to run and only lit on special occasions of national moment. 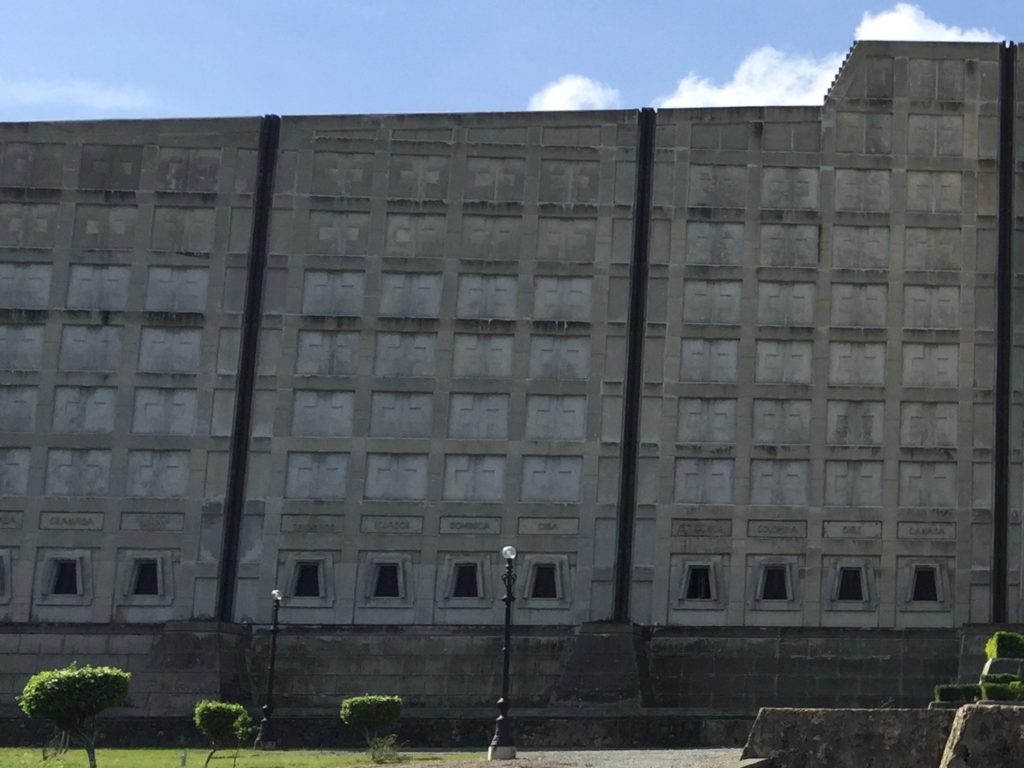 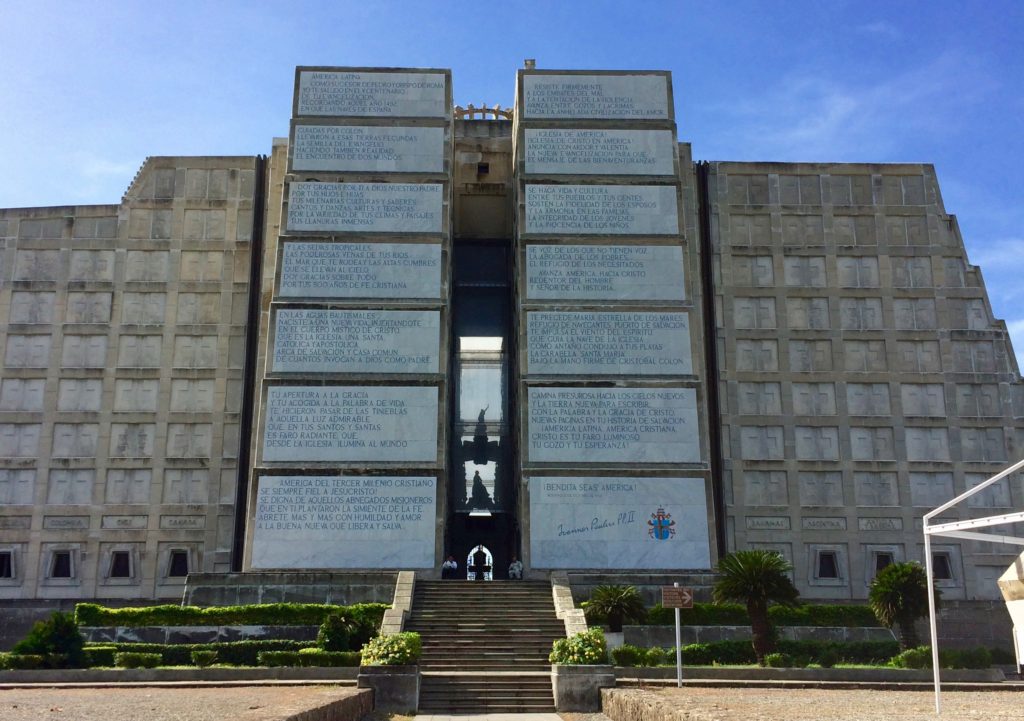 On approach, the shape of the Columbus Lighthouse suggests a giant fortress rather than the giant cross that can be seen from an aerial view. The formidable grey concrete sides of the nave slope inward as they reach upward. The color and texture of the construction material is reminiscent of the drudgery we associate with Soviet era buildings when concrete was king. I didn’t detect the pattern of the cross repeated in each square until I examined my photos at home.

Back then, I truly thought I’d come to the wrong place, that my hapless tourist-self had stumbled on some kind of a military installation. This couldn’t be a lighthouse. We must be looking at a 680-foot long bunker. Best to turn around and leave quickly, right?

Just then another car drove into the parking lot and we watched as people strolled casually toward the building. No longer trusting our first impressions, we parked our car and approached the nearest entrance. I’ve nearly perfected my foreigner pantomime for “Where are we and what next?” The guard responded kindly and directed us to the front of the building where we paid the small entry fee. 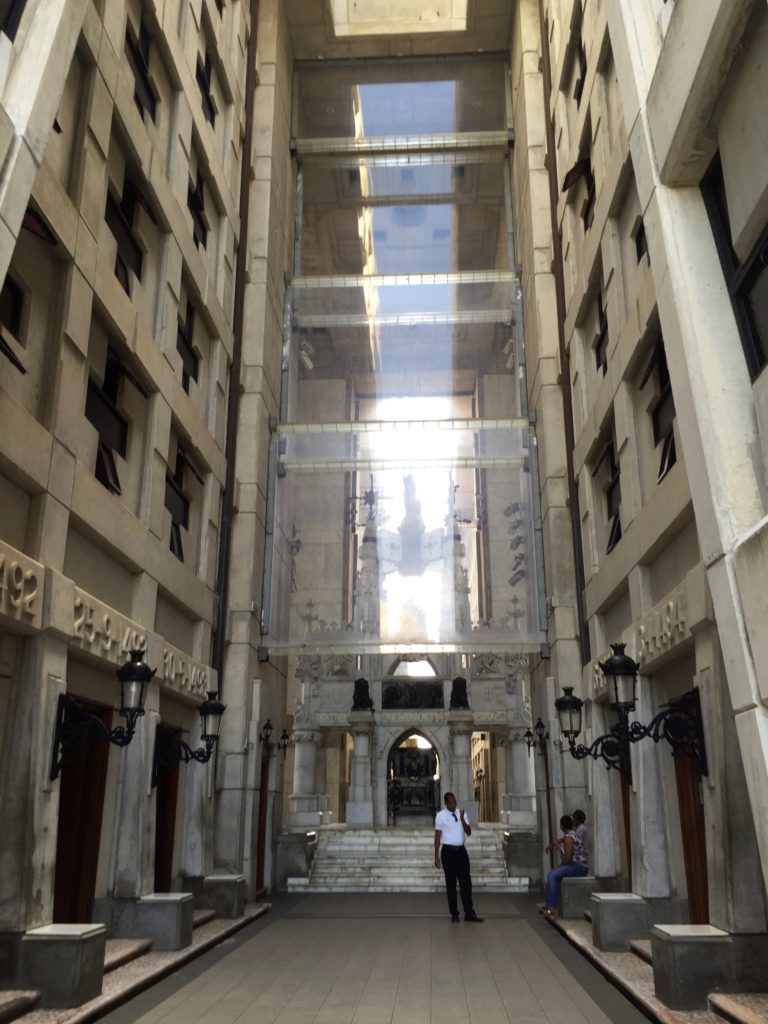 Entrance to Faro a Colon 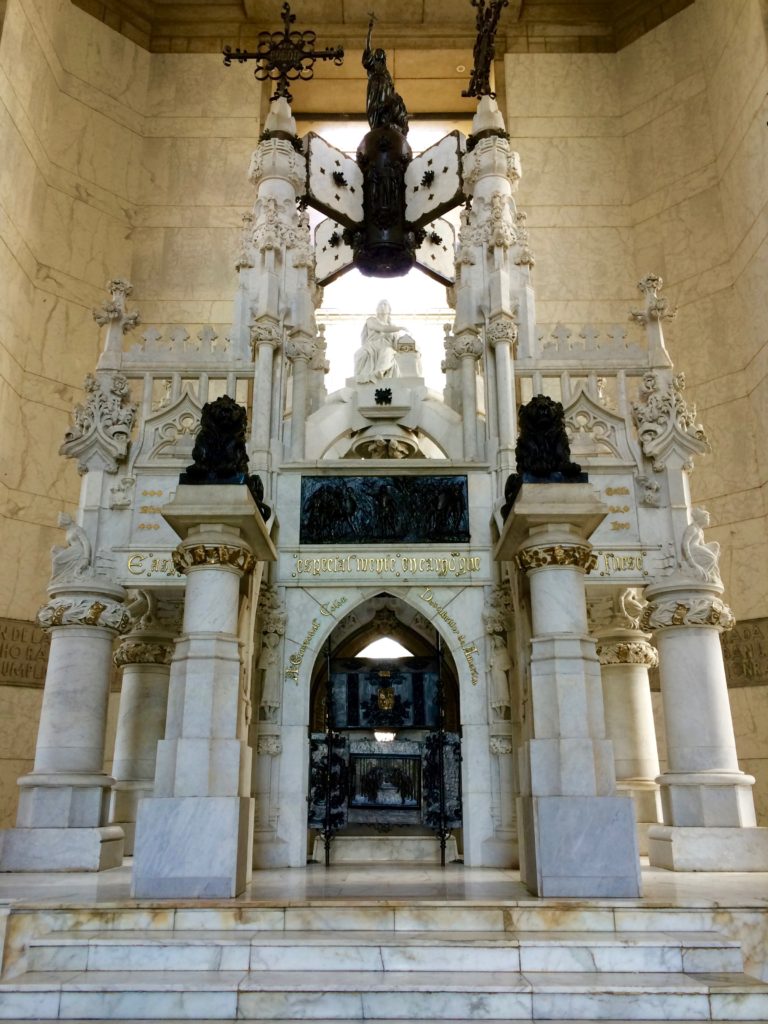 The main entrance affords a fine view of the mausoleum aspect of the structure, which houses the alleged remains of Christopher Columbus directly under the point where the arms of the cross connect. Encased in heavily ornate metal the coffin signaled to us aspects of a medieval cathedral representing the Christianization of the Americas. But that’s only part of the building. 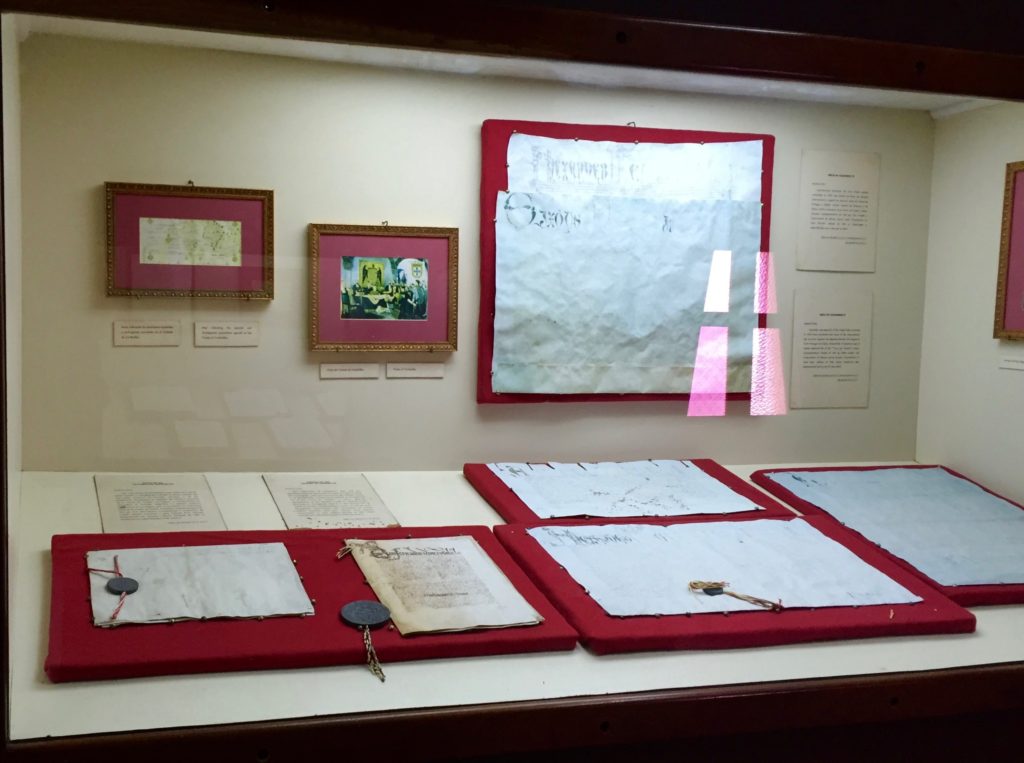 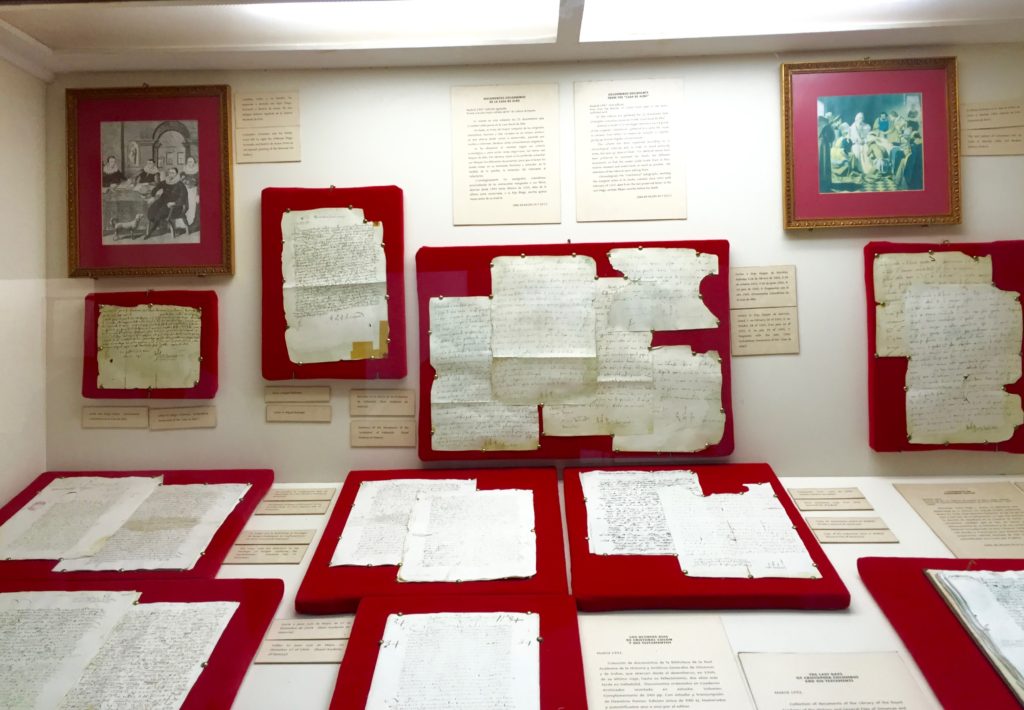 Probably the most valuable installations are the original documents dating from the time of Columbus which are housed in plexi-glass cases. I was so surprised to see the books displayed like that that I questioned our guide as to whether these were copies or original documents. He insisted they were all originals. They are exactly the kind of historical documents that need to be preserved in an environment completely controlled as to light and humidity. Sadly, they are neither. Which means they are inevitably time-dated for destruction. I can tell you that today the ink is fading and the leaves are curling (on documents not shown above) . I wonder if anyone has made digital copies. 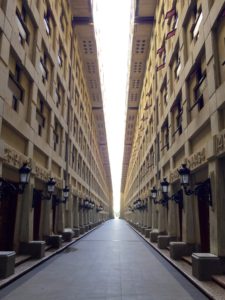 Nave Open to the Skies

From there, the rooms lining the open-air nave on either side house tributes sent by countries all over the world in recognition of Columbus’ contribution in opening the world to international trade. The countries of South America sent primarily folkloric ornaments, art, and musical instruments. Many Oriental countries contributed to the monument who would seem to have a lesser stake in the history of shipping and exploration that involved the Americas. China, Japan, Korea, for example, sent an abundance of traditional arts they feel represent their culture.

The European exhibits tend toward textiles and photos. North American contributions were scant. Well, at least that describes the U.S. The Canadian stall was absolutely bare. Maybe that means they signed on to the project at some point, but no future government has carried through with the memorabilia.

History of the monument

Curiously, the history of the conception and building of the Columbus Lighthouse is almost as politically convoluted as that of the man the monument purports to honor, Christopher Columbus. I’m sure that was not the case back in 1852 when the historian, Antonio Delmonte y Tejada, published his history of Santo Domingo and suggested that a monument to Columbus be created in Santo Domingo.

The idea percolated in various international localities for a few decades, but not much was done about it until, at a 1923 international conference in Chile, the attendees agreed that all the governments and peoples of the Americas should cooperate to build the monument. 455 participants from 48 countries responded to the competition for the architectural rendering. Frank Lloyd Wright was one of the judges who awarded the prize to the Scottish architect Joseph Lea Gleave in 1931. 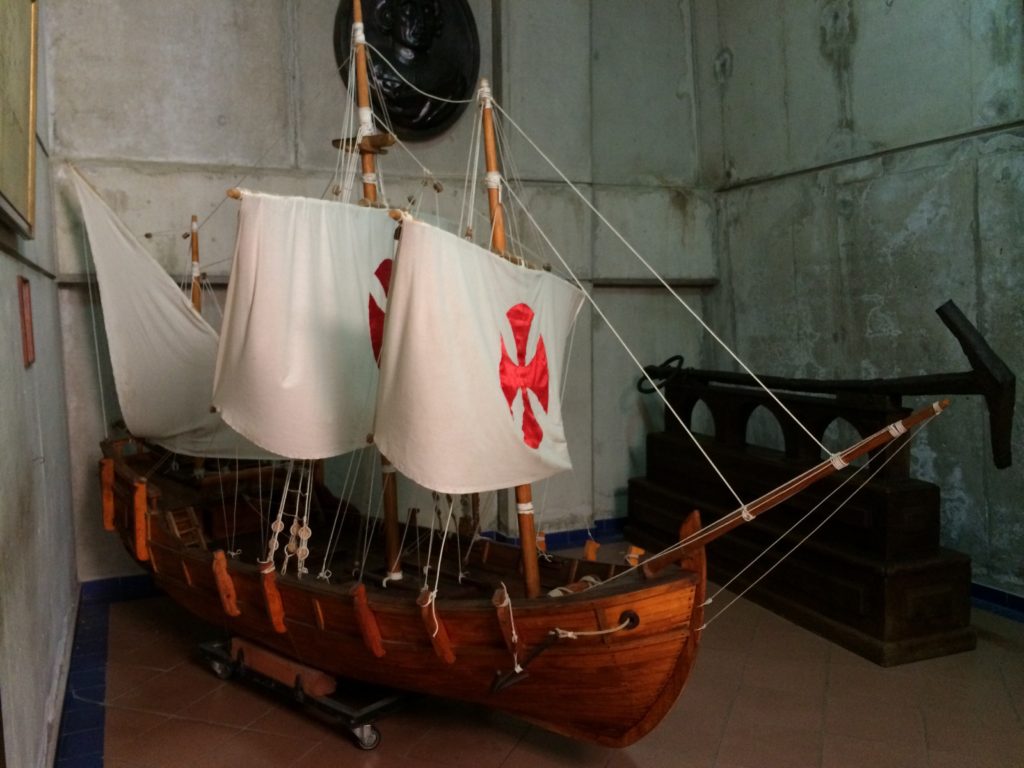 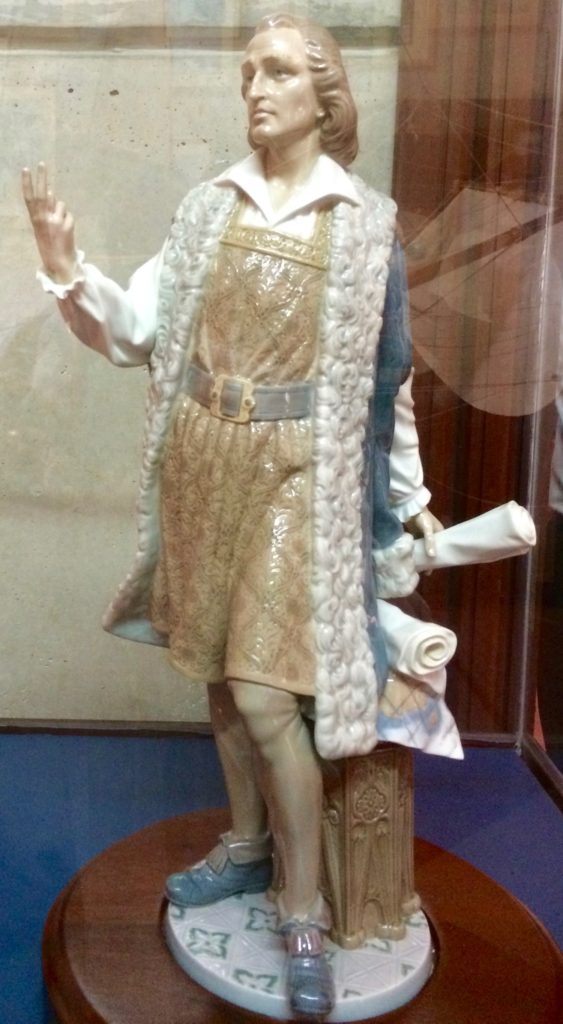 By this time, the Dominican Republic was in turmoil. Trujillo’s repressive regime had taken political control in 1930 and a few months later the city of Santo Domingo was hit by a massive hurricane that killed thousands of people and essentially demolished the capital city. Trujillo supervised the rebuilding of the city, named it in his own honor, and by 1948 the foundations for the Columbus Lighthouse were laid. But by 1950 very little of the money pledged by the nations of the Americas had actually been donated. Trujillo’s growing reputation as a ruthless dictator seems a likely cause, and no building went forward until after his assassination in 1961.

Subsequent governments in the Dominican Republic had difficulty overcoming endemic political corruption and the increasing lack of technology. But finally, in 1986, building began in earnest in order to complete the monument in time for the 500th (quincentennial) anniversary of the discovery of the Americas.

The Pope John Paul II was invited to attend and came amidst great celebration. The Pope-mobile, with its sides of yellowing plexiglass, resides outside the Faro a Colon, a monument built in celebration of the Christianizing of the Americas. 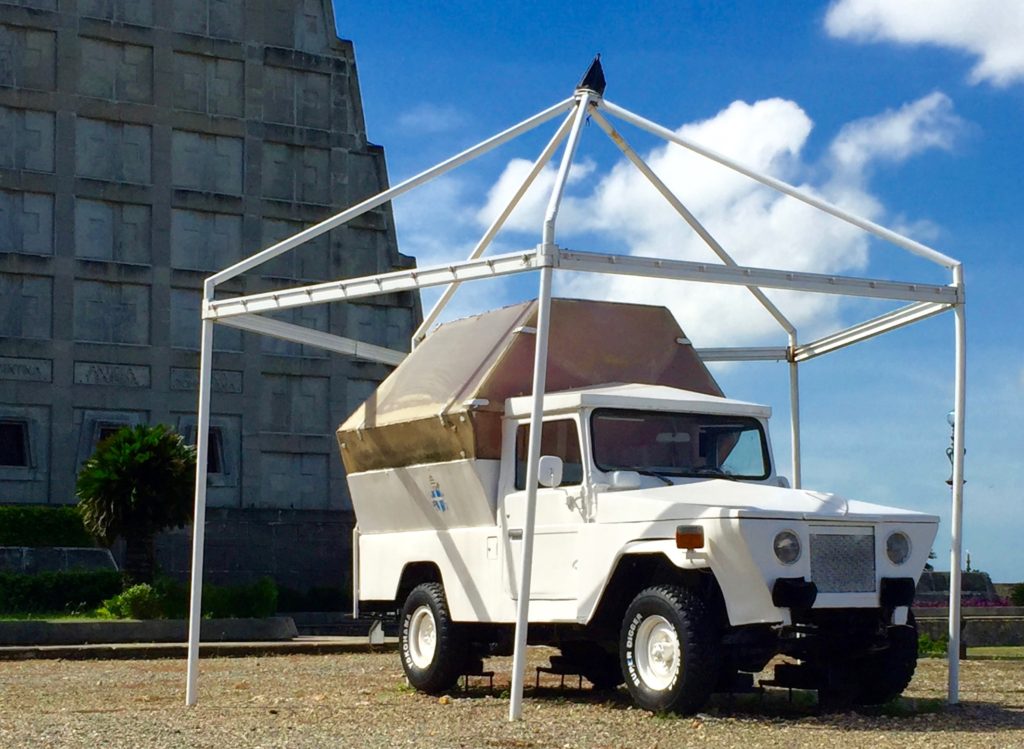