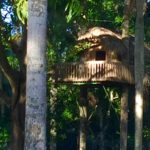 Music was our mandate for Christmas morning in Los Llanos. The invitation came about because friends involved with humanitarian work in the DR asked us to infuse the Christmas service in a small church in a rural location east and north of Santo Domingo with any music we wanted to bring. This wasn’t much direction, so we puzzled about how to adapt our North American sensibilities to a different holiday tradition.

On the way to Los Llanos

We’ve learned that December 25th in the Dominican Republic is basically a day for feasting with friends and family, and not necessarily a day when people flock to church. Gifts are given on January 6th in honor of Three Kings Day, so that aspect of Christmas is muted on the 25th. We wondered what carols familiar to us would also be familiar to them. How would they feel about some outsiders flooding their little congregation with music?

Our ninety-minute drive took us east from the city of Santo Domingo along the coast, where we turned north onto wide dirt roads full of pot holes and lined with cane fields. Then we discovered something straight out of a fantasy novel.

House in a tree 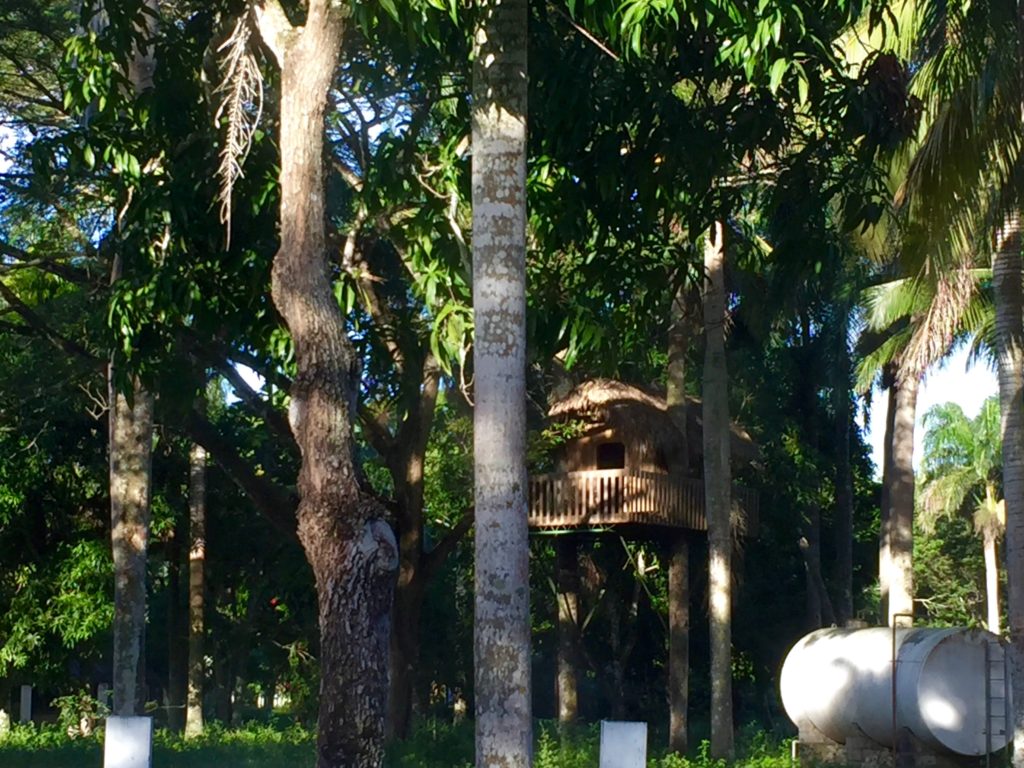 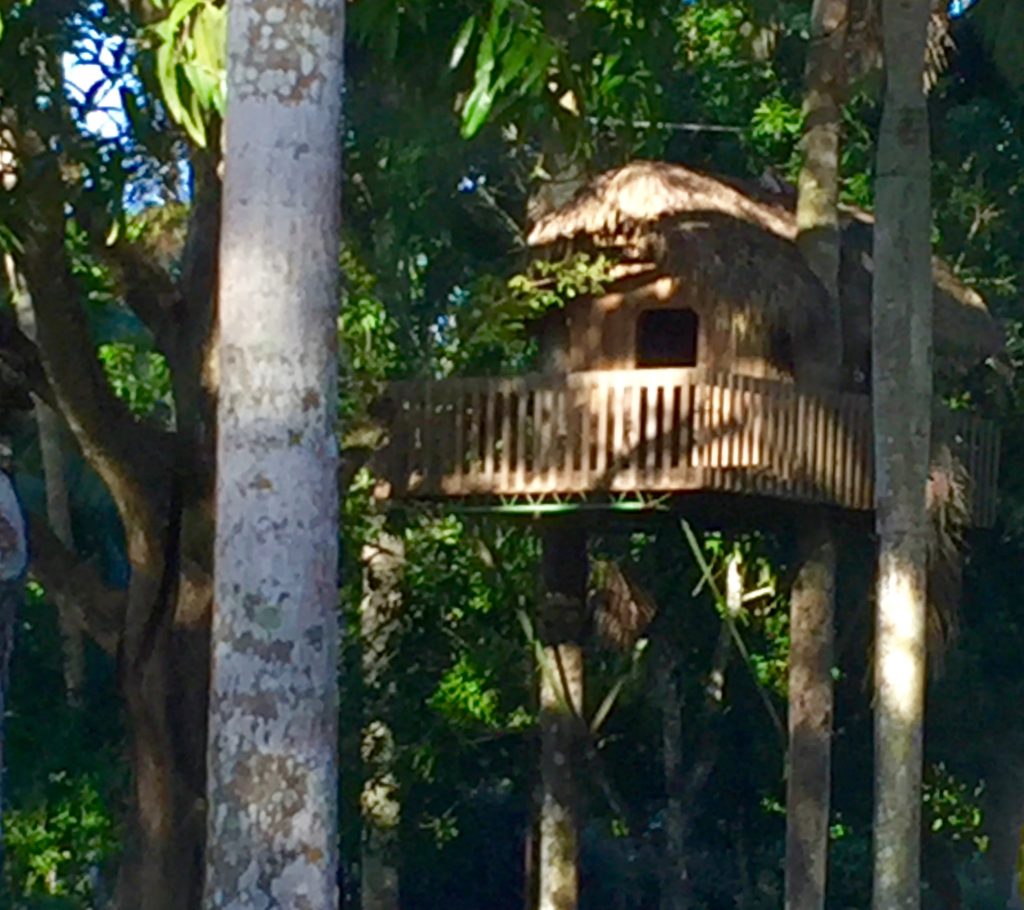 House in a tree

Amidst beautiful tropical foliage in an acreage apparently cordoned off from general usage, we spied a house in a tree. It was not a play house for children, but quite literally a house built in a tree. I wanted to move in. A large propane tank beneath it suggested that the house was intended for use by a family or group over a period of time. While it appeared to be currently vacant, wouldn’t a reservation be fun? 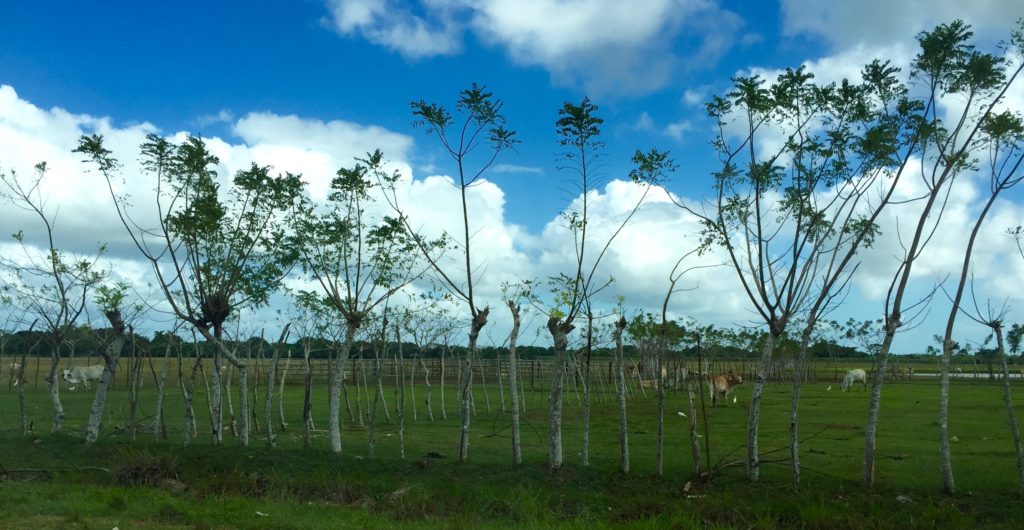 On all sides, the rural landscape was divided into fields using living fences. Most places I’ve lived, wooden fences dry to a lovely silver-grey after the wood is cut and has weathered for a few years. Not here. The island is so fertile, the soil so deep, the humidity level so constant, that if farmers place sticks along a wire fence to serve as a property line, the sticks promptly spring to life. We’ve seen it all over Hispaniola—stick fences that sprout roots and leaves (and often double as laundry drying racks). 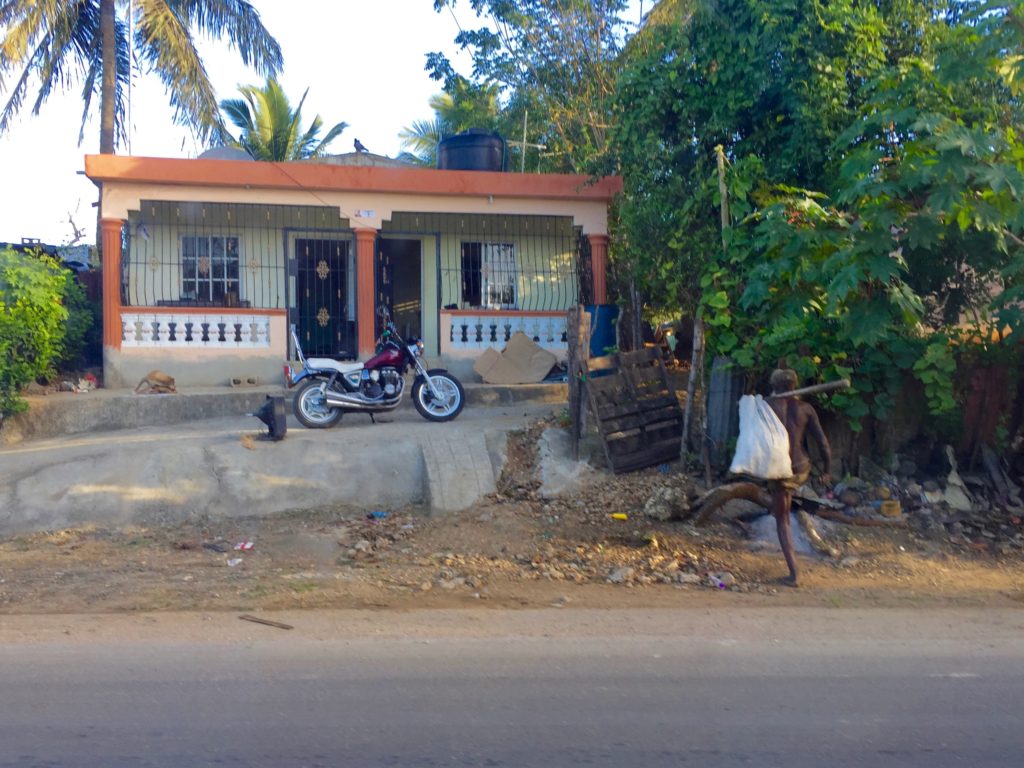 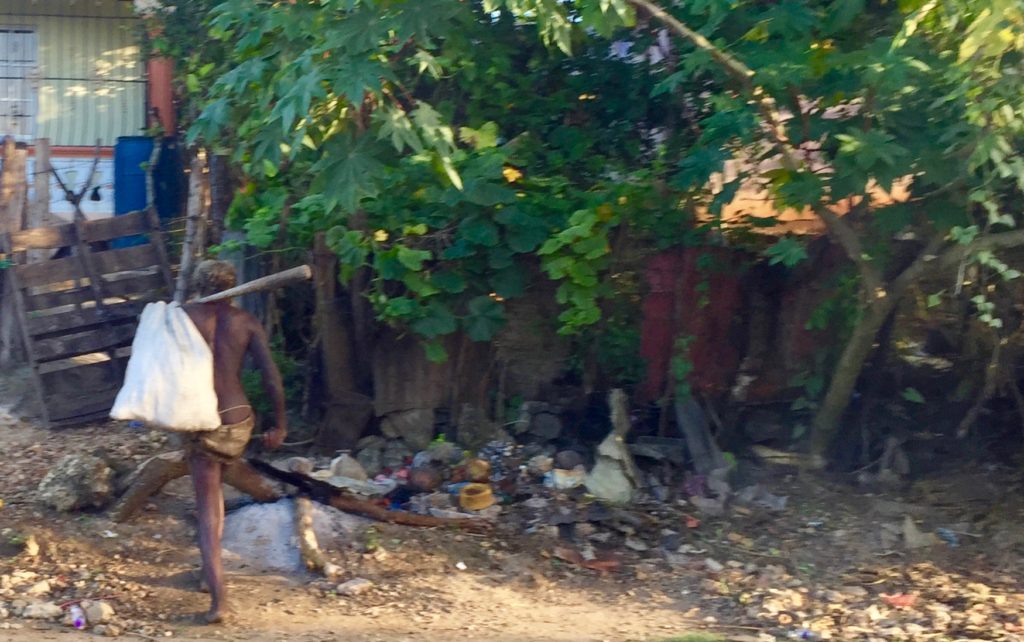 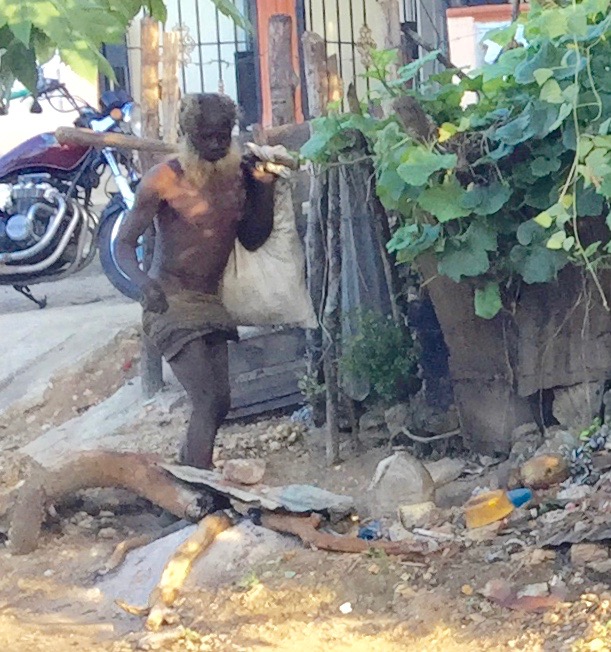 As we entered a small village, we encountered stark contrasts. An attractive, painted house complete with a large new motorbike out front coexisted with an aboriginal-type squatter living beside the road in front. Friends told us the man has lived for many years like that with the absolute minimum of personal objects. Whenever authorities have tried to remove him, he comes right back. Apparently he feels a sense of belonging–perhaps even ownership–of a few square yards of gravel underneath a hedge by the side of a country road full of agricultural traffic. Please keep in mind that these photos were taken from the window of a moving vehicle and aren’t the character study the man deserves. 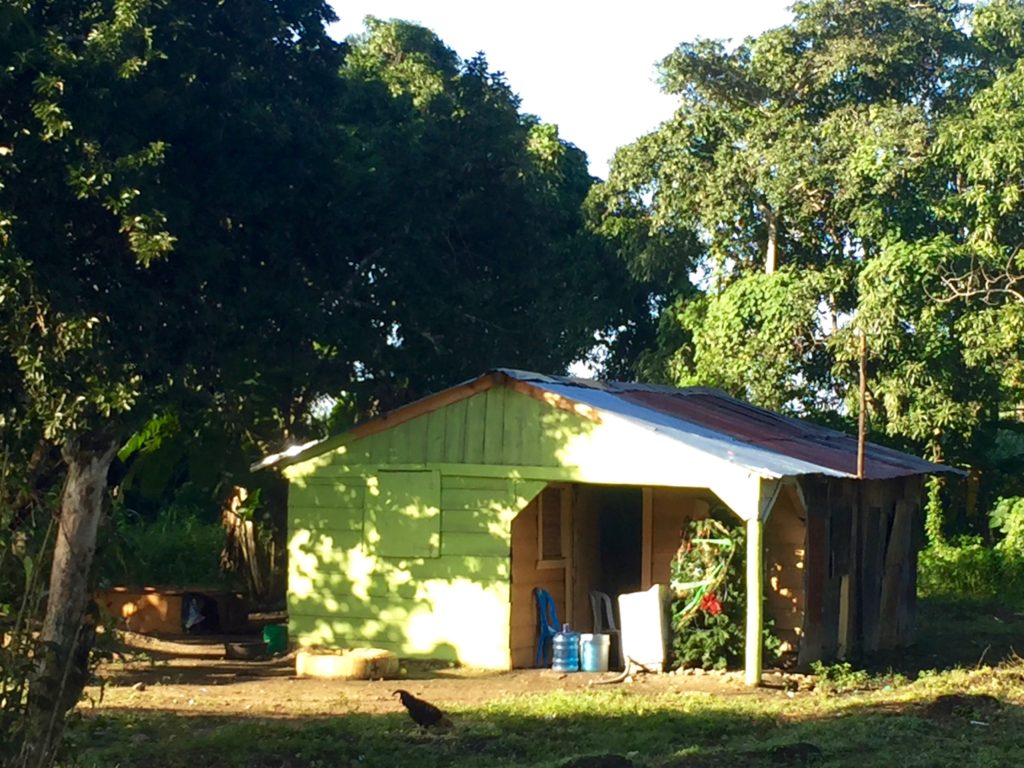 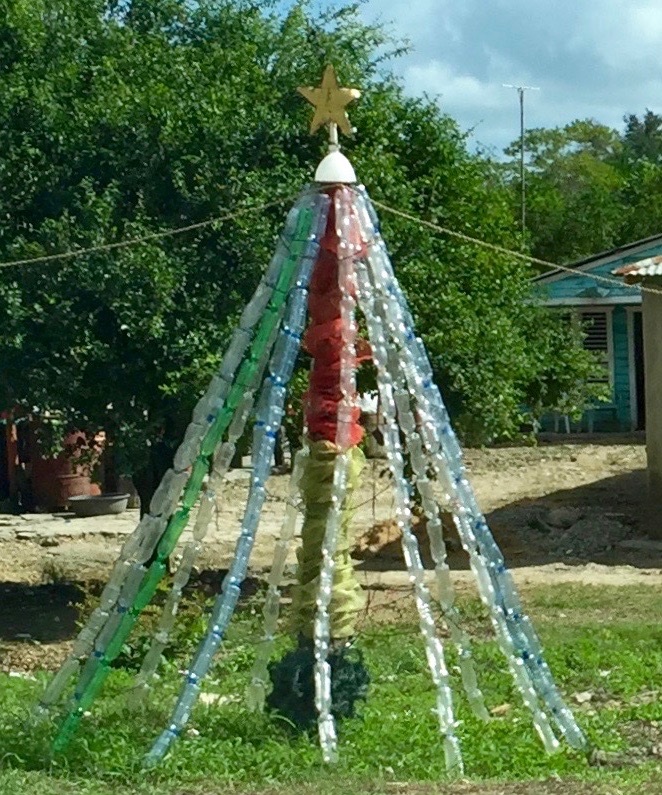 From time to time we passed through small villages complete with yellow dogs and local colmados (a family owned corner store). Tiny houses or makeshift huts looked to be in varying states of repair. Some had a decorated Christmas tree visible from the road. I wondered how people would enter the front door, what with the washing machine, Christmas tree, and water jugs.

Note the close-up photo of the triangular outline topped with a star. Each line of the tree is a stack of empty water bottles! Actually, I think it’s quite a clever idea because the plastic bottles refracted the sun’s rays and created a shimmering effect. To me, that Christmas tree is a salute to individuality, a quality I appreciate in these decorations created by very poor people. 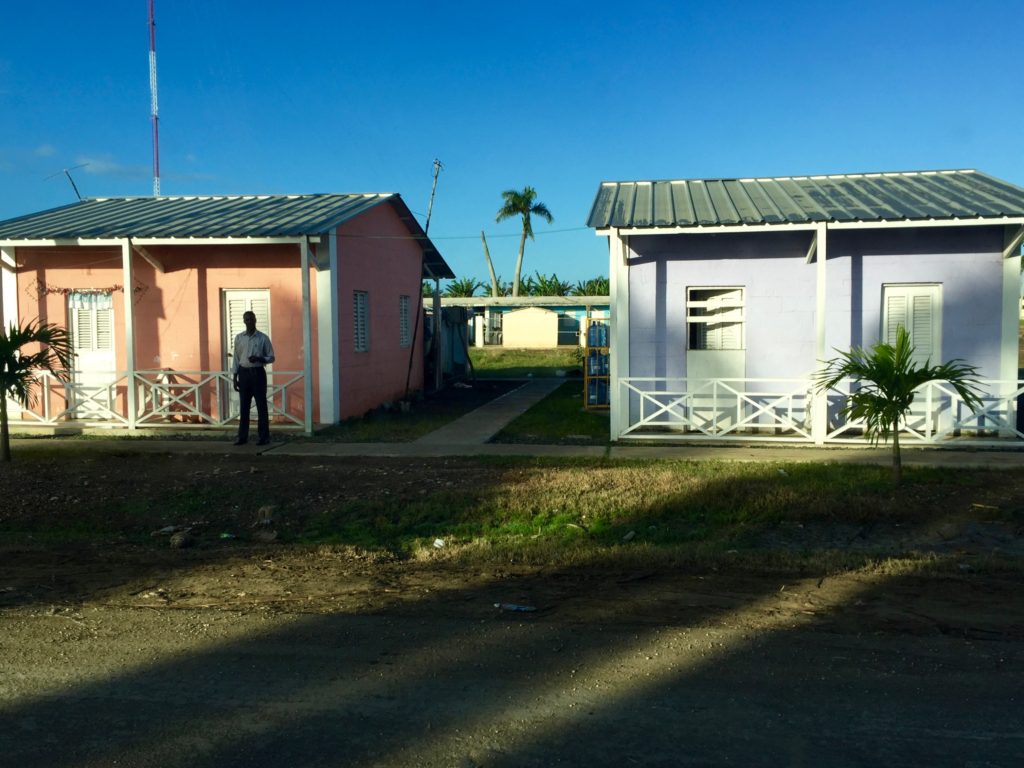 We also passed company-built duplexes for housing the (primarily) Haitian cane field workers. The structures appeared to be in good repair, at least the outsides were painted, but they were minuscule. Certainly they could accommodate little more than one single bed for one male worker. What about families? 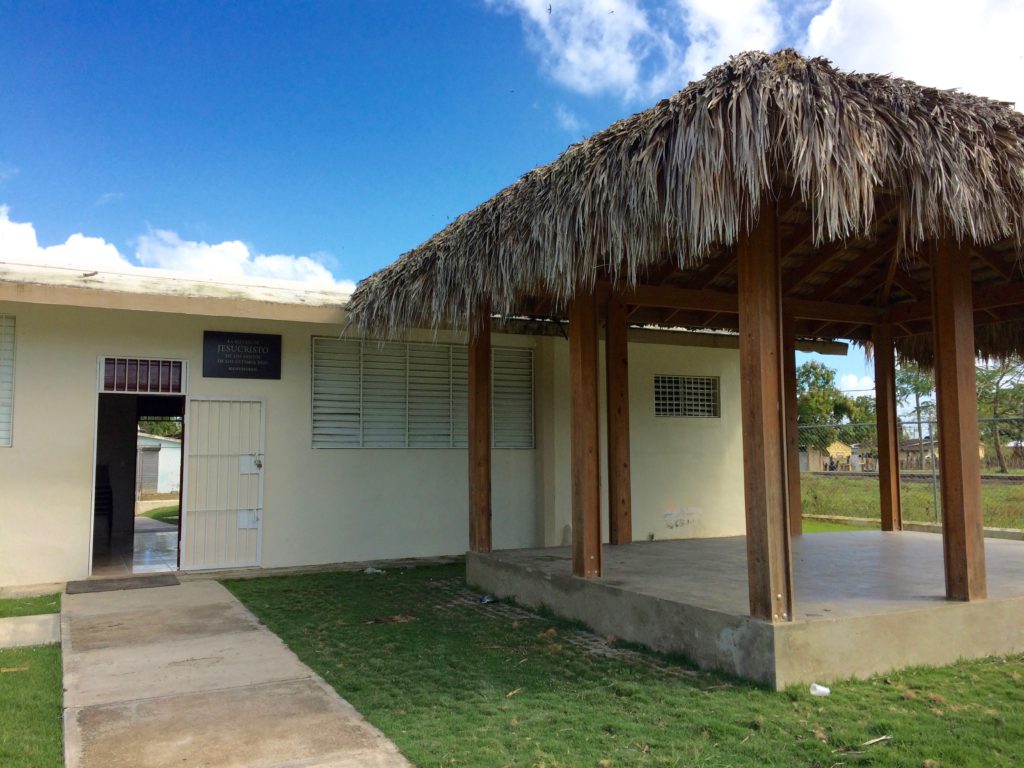 At last we arrived at the little rented building that served as a chapel. It was clean (but there was no running water in the bathrooms). As people arrived for the church service, they’d approach the friends we came with, the women giving Caribbean-style air-kisses cheek-to-cheek to other women, the men with hands extended in greeting. Then they’d turn to recognize me, their hands still extended. Here I was, seated at the keyboard playing prelude music. Do I lift a hand to be sociable?  I had to make my decision on the spot. I’d been invited to make music and if my busily employed fingers were my only social handicap I’d be able to weather it! A big smile on my face would have to do.

We had planned on playing a fancy four-hand accompaniment to some of the Christmas carols and thought we had plenty of electronic keyboard power. We had brought our own to combine with the keyboard stored in the building. But we hadn’t factored in the speaker size employed by the congregation in the little rented building next door. The Evangelistas definitely had greater electronic capacity and gave us plenty to contemplate during the traditionally silent passing of our sacrament.

Tellingly, there were no cars but ours in front of the building. On this Christmas morning the van we came in became the unofficial taxi home for an elderly man who had already walked two miles to get to church. I was surprised to see the van jam-packed with people. When I peered inside, I saw a flock of young women who had all squeezed in for the ride. Although they actually live close by, they enjoy riding around in a big new vehicle and waving to their friends.

The memory I will cherish from this Christmas morning is the warmth of the congregation. They seemed happy to welcome us into their community and I was grateful to be included.