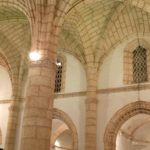 The Christmas concert in the first cathedral in America is a once-a-year event at Basílica Catedral Metropolitana Santa María de la Encarnación Primada de América. We arrived in the Colonial Zone with only half an hour to spare and I was tense. I really wanted to get in to see the performance, but I’d been warned to expect lines, standing room only, etc. The Colonial Zone was already into heavy-duty party mode, cars lining the narrow lanes, street dances and big speakers blasting every few blocks.

Over time our friends have adopted some Dominican parking moxi (which is the only way to go). He settled the SUV with its rear-end hanging out the end of the street we were on. However, said rear-end was protected by the vehicle parked on the corner of the right angle street next to it. With success like that, we could walk away and not give the car another thought for the next two hours.

Meanwhile, all the people who had dutifully queued up around the outside edges of the cathedral had been ushered inside and seated on plastic lawn chairs on the edges of the hall, often behind a robust pillar. Much of the nave area was cordoned off for luminaries. But we happened to arrive just as the extra seats in that section were being let go, so we ended up on a center rear pew. It was great. We were completely pleased with ourselves.

Then someone turned on a spotlight focused not on the performers but directly into the faces of the audience. I assumed it was part of a test, but no—it shone brightly into our eyes for the entire performance. For two hours I held my program up to shield my eyes from the glare.

The orchestra was seated and Concert A had been agreed upon. I love that sound—that drone of an orchestra tuning. It makes goose bumps on my arms and I have the impulse to weep. Not sure why. And then we all sat.

Finally at 20 past the advertised start time of 8, the dignitaries arrived in their shining black cars and were escorted to the reserve seats. People whispered that the President was not there, but his wife was. Heads bobbed up and down to see who was in the entourage and what they were wearing and where they were sitting. Finally we could start.

A lovely little children’s choir filed in while singing. The older children came in first, and I was fascinated to hear the timbre of the choir change from mellow to bright as the voices of the very youngest joined the choir. The first song was breathlessly too quick, but the others were delightful.

The next section of the program began with tenors singing the traditional Spanish carol, “Fum, Fum, Fum” as they filed onto the stage. Next the basses entered, which changed the vibrations in the cathedral, and lastly the ladies voices were added. The first half of the concert consisted of selections from Handel’s Messiah, involving chorus and soloists. I don’t care that they sang the English words with Spanish accents; I don’t care that the tenor made me worry for fear he’d make it through. I do care that the orchestra was crisp, and that the soprano was lovely. Cudos to all those involved.

The printed program stated “Intermedio Musical” was next. We learned that it wasn’t the expected walk-about where the audience takes a pee-break or has a smoke. Instead, the audience remained seated and a phenomenal young violinist played a one-movement concerto. At the end, every person in the cathedral rose to his/her feet with exuberant applause. I still don’t know the violinist’s name, nor the name of the composer–so wonderful, yet so frustrating.

The second half of the program involved lighter music and was sung in Spanish for the most part. My friends and I disagreed about the soprano in the last section of the program. I thought her vocal quality elegant, and that she was wonderfully nimble, fluid and clear—everything you hope for in a soprano. I covered all their objections by maintaining that she was a fine musician with a gorgeous instrument who was heroically dealing with electronic over-amplification in an already acoustically live cathedral.

On the other hand, what I heard happening in the orchestra was distressing. They were coming in half-there and finally getting it together by the 4th measure. I couldn’t figure out what was going on. We were too far back to see that the aged conductor had to support himself with one hand and only had one hand to wave, obviously dropping his cues. I didn’t realize until much later that a change in conductor apparently honored the legacy of an octogenarian pioneer musician. On an island where everybody knows everybody, no doubt it was an emotionally poignant moment. But this stark outsider wondered, there on the back pew, what could possibly have gone so wrong with the orchestra after such a fine beginning.

Just because the performance wasn’t perfect doesn’t mean we didn’t love hearing beautiful music in a splendid cathedral. The concert was truly a Christmas joy.

Our Christmas was wonderful!

2 thoughts on “Christmas Concert in the First Cathedral in America”