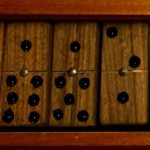 In a country where baseball is as much of a passion as dominos, why call dominos the national game? Huge amounts of energy and money go into baseball, which I’ve written about elsewhere. Very little outlay is necessary for dominos. Some say whichever game is most popular is a toss-up, but I suspect a class-divide may be involved. Baseball is owned by big money from international sources. Vast numbers of domino players get together with three other buddies of an afternoon at a sidewalk table under a tree. 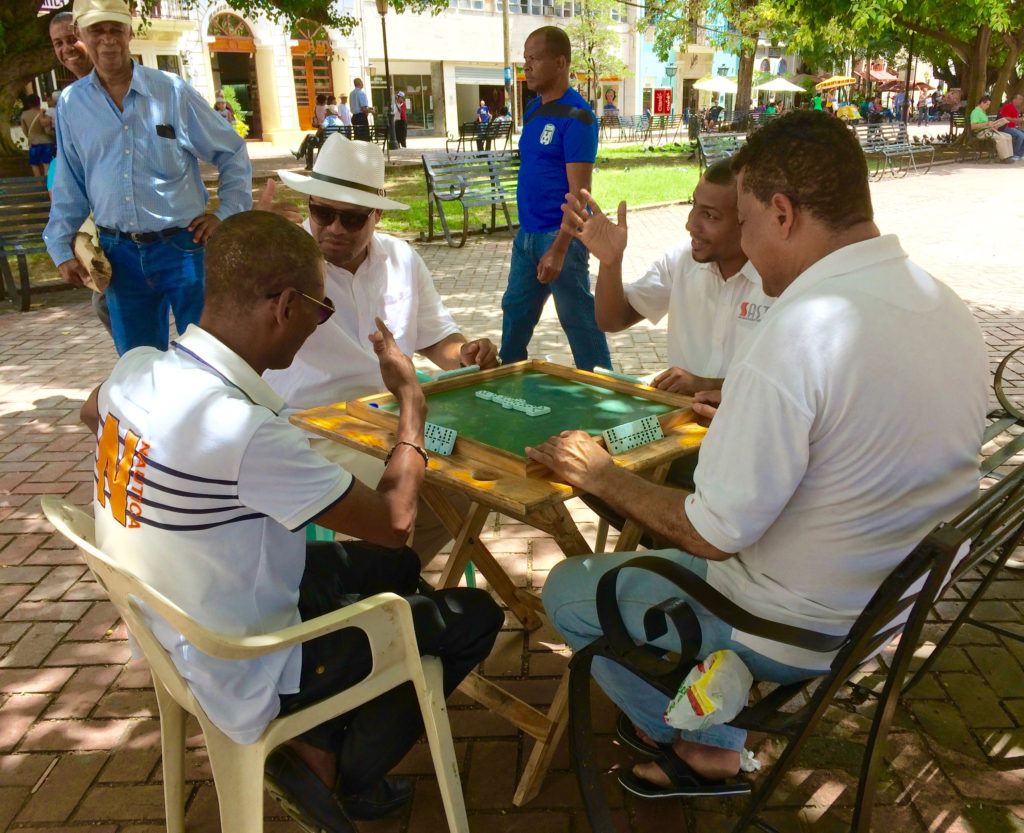 Dominos in the Colonial Zone 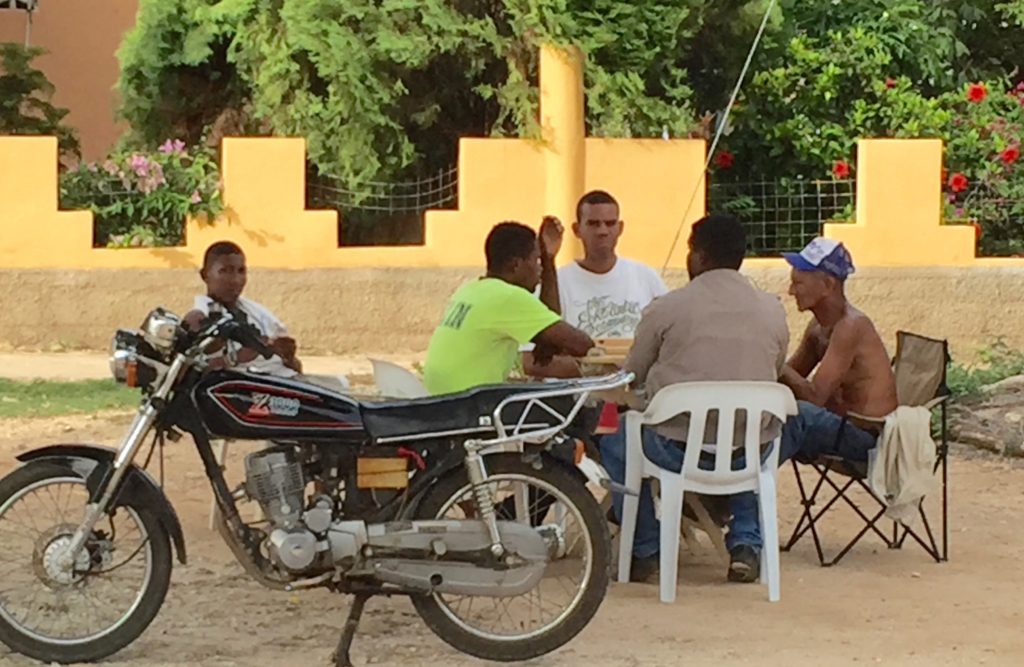 Domino players in the DR

Yes, Caribbean area tournaments attract afficionados from Latin American countries, but nothing on the scale of baseball. Dominos are played a little differently in the Dominican Republic compared to other Caribbean islands. My favorite description is found on the website for the Colonial Zone. Scroll half-way down the page until you find it.

Another difference between players of the two games is age. Old men don’t very often play serious baseball. But in our travels around the island we see men, both old and young, seated at square tables on the sidewalks and in the parks, intent on their domino game. Important things can be at stake: money, goods, honour. The style of play involves a lot of strategy and bluffing, bluster and shouting. But the fact remains, even if he doesn’t have a steady group of friends, every man can pick up a game of dominos. Not everyone can play baseball or afford a ticket to Quisqueya Stadium in the capital city.

Dominos is traditionally a man’s game. I’ve never seen one single woman seated at a domino table. Attendance at a baseball game, however, seems not to favor one gender over another. How something becomes a gendered activity fascinates me. I wonder if a lot of men who play dominos are unemployed and bored.

Playing pieces inside the parquet box

Of course every tourist has to have his/her own set of dominos made in the DR. Be sure you buy the kind with iron nails pounded in the center of each tile so that when your turn comes, you can slam your piece onto the playing table with gusto and a loud clack. These dominoes were made by Mary Matios Lantigua who created the dolls and boxes in my blog “Artisans Who Create for Their Culture.” The dolls and dominoes are made in the family home in San Cristobal. You’ll need to make an appointment via email sent to <josedamian2006@hotmail.com> both to see them and to make an order. The sets pictured above are miniature, with the box measuring L7 inches, W3 inches, D 2.5 inches. But I also saw full-size sets in the shop.

Typically, the playing tables are metal or hard formica—whatever will amplify the sound of the nail. This gas station on hwy #19 in the interior of the country was partially ready for business when we filled up our car. These domino tables, all set up and ready for players, are as important to the local clientele as gasoline is to travellers. 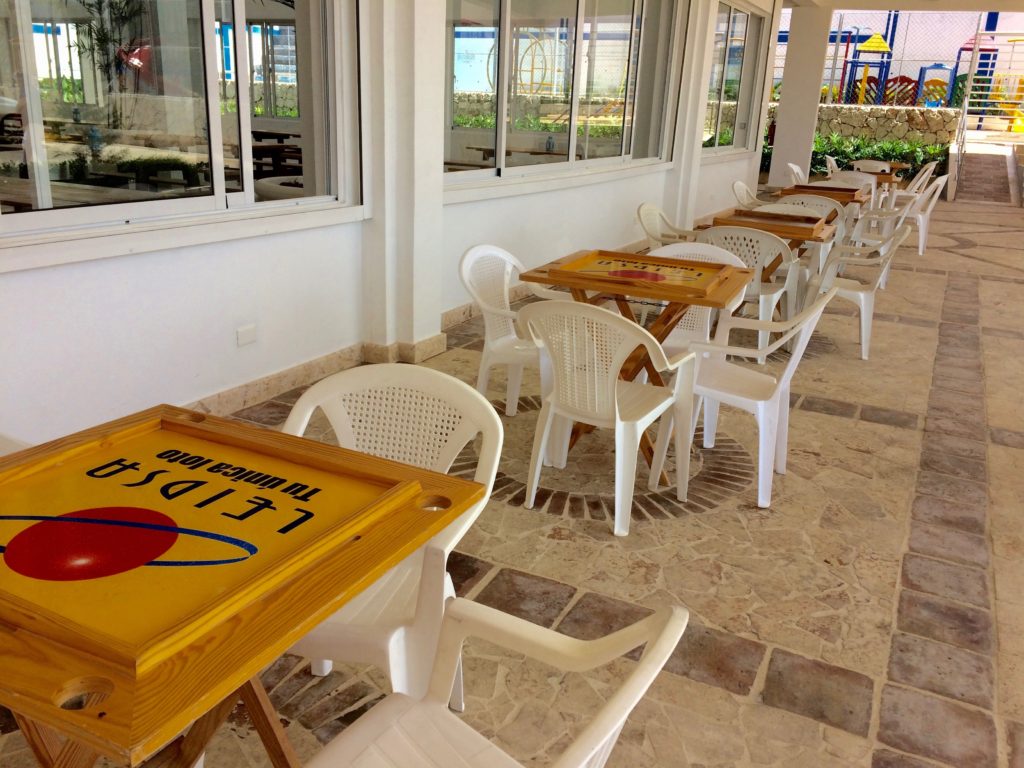 I’m always interested in which countries claim the origin of an art form or an idea or a game. When I was living in China my students would point out that Italian pasta was imported from China. Similarly, French cloisonné was first developed in China. The Caribbean game of dominos, popular in 18th century Europe, of course began in . . . . .

International trade routes have been going on for millennia, and the only thing that ever changes is the means of transport. So, my instincts lead me to believe the history of dominos that claims, “Probably the earliest known domino set was found in the ancient Egyptian King Tutankhamen’s tomb in Thebes. Tutankhamen reigned in Egypt’s 18th dynasty, around 1355 BC, and the set discovered is now on display in an Egyptian museum in Cairo.”