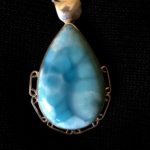 Found nowhere else in the world, the beautiful blue Larimar – uniquely Dominican. I’ve seen women wear it with every possible shade of blue, from sky to navy to aqua. Usually set in silver, Larimar has some of the aesthetic qualities of Navajo turquoise. It’s worn at the symphony (where everyone dresses up) and often it’s combined with more casual clothes. The colors range from a light milky blue to an intense Caribbean sky-blue. Some Larimar has a mottling of  brown, usually a rich chocolate color, when it is mined close to where the Larimar bed begins. Personally, I think it’s all lovely.

Here are some examples of Larimar jewelry my friends thought beautiful enough to purchase. 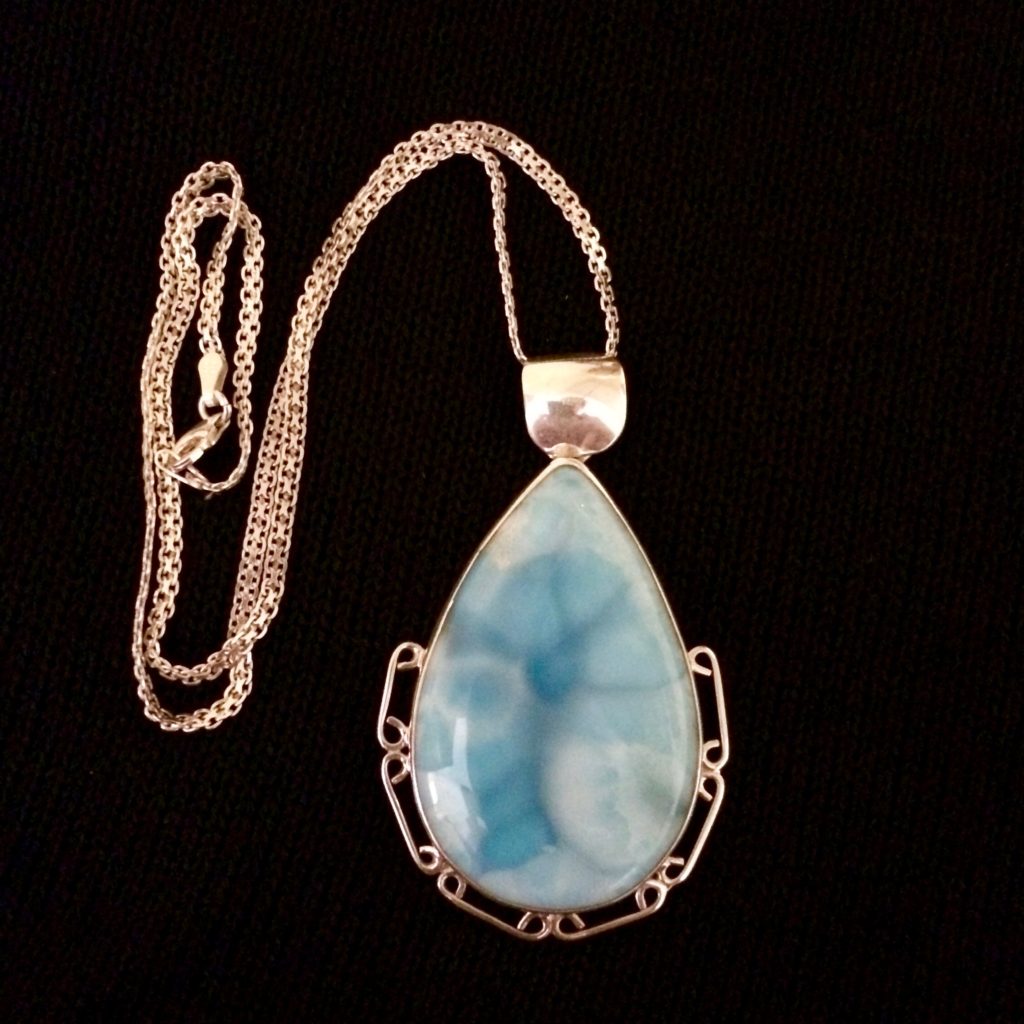 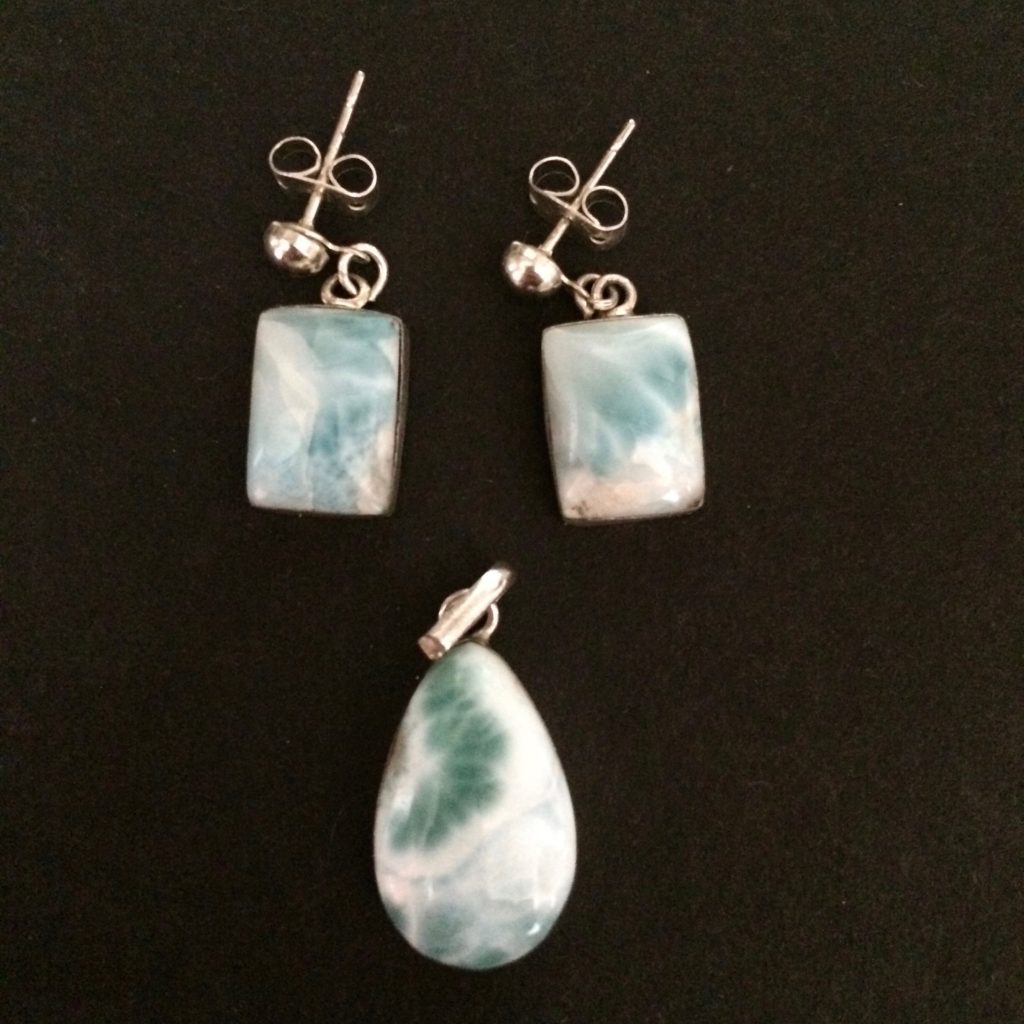 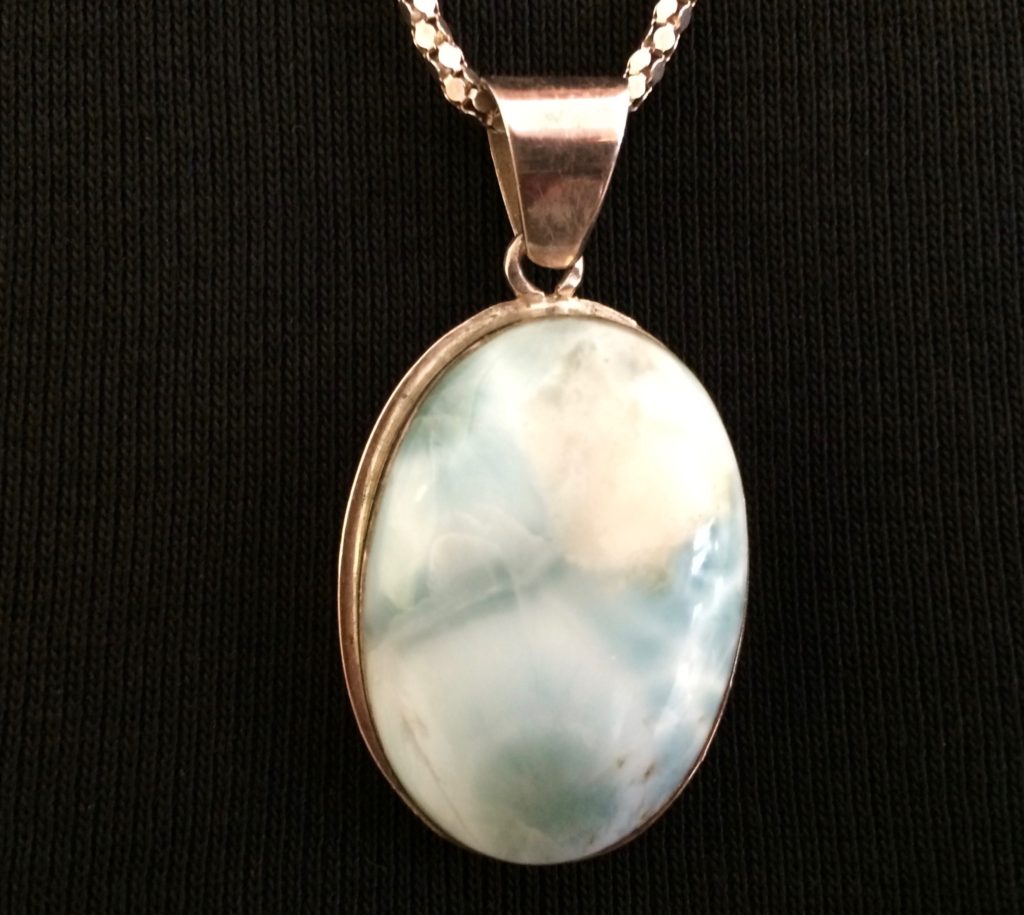 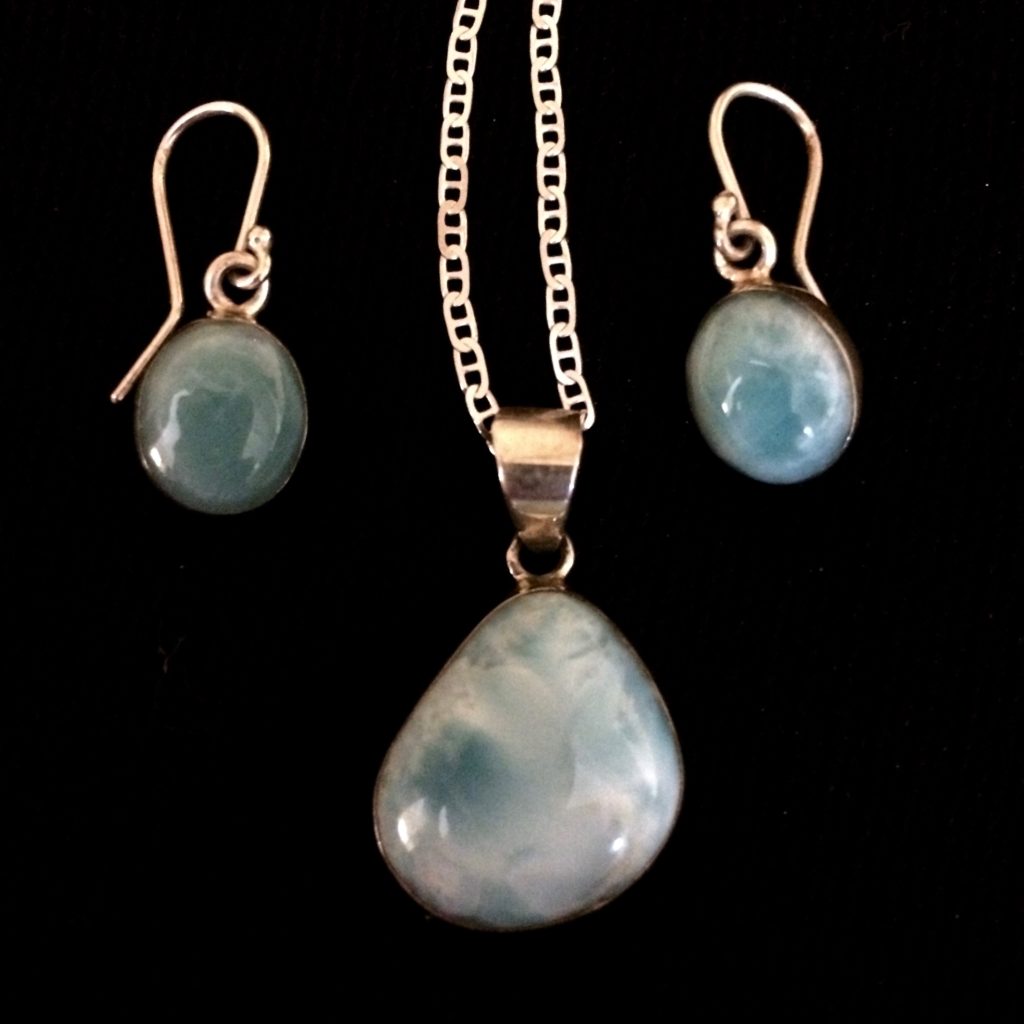 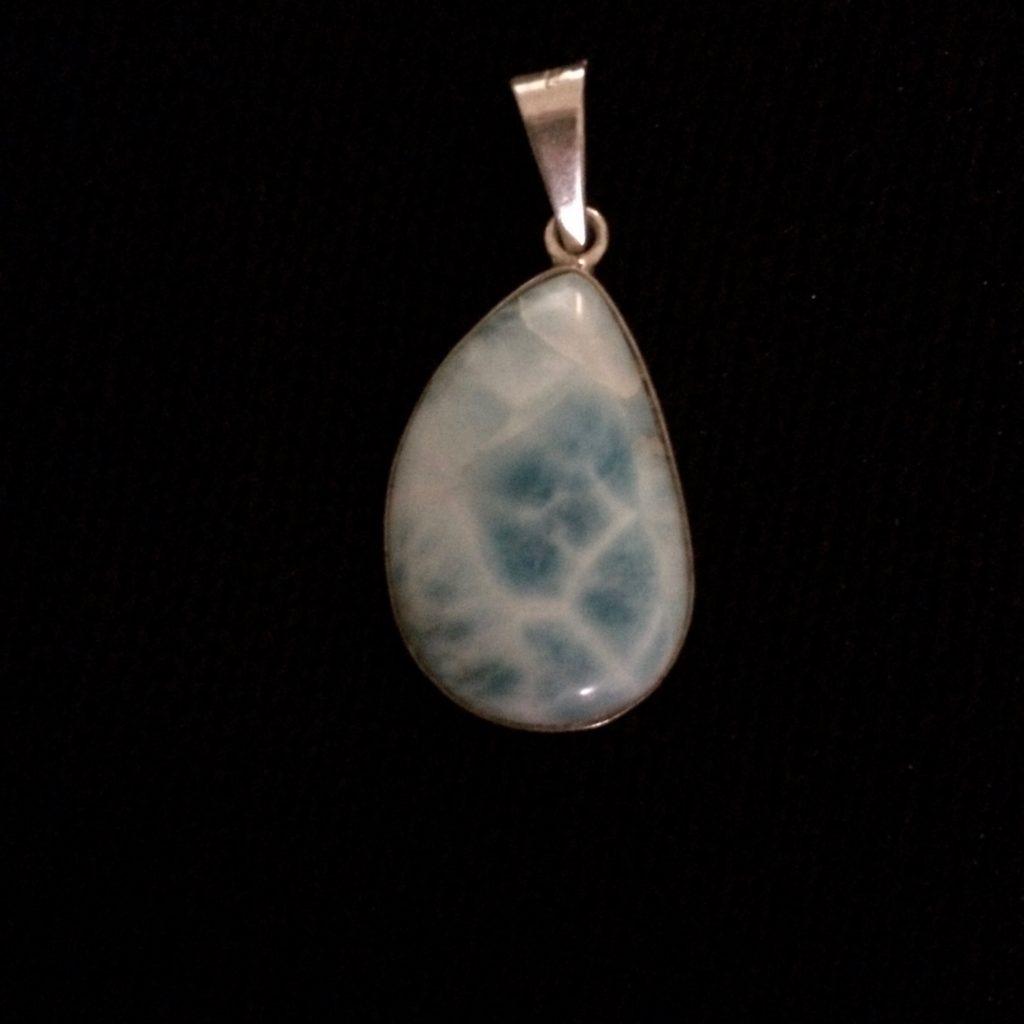 According to Wikipedia, “The most important outcrop of blue pectolite is located at Los Chupaderos, in the section of Los Checheses, about 10 km (6.2 mi) southwest of the city of Barahona, in the south-western region of the Dominican Republic. It is a single mountainside now perforated with approximately 2,000 vertical shafts, surrounded by rainforest vegetation and deposits of blue-colored mine tailings.”

Pectolite (acid silicate hydrate of calcium and sodium) is found in many locations around the world, but the unique blue coloration of Larimar is the result of copper replacing calcium in the mineral. The value of the stone is related to the intensity of the blue it contains, although some Larimar shades to the green.

Each of the following sources for acquiring the elegant stone has advantages and disadvantages.

You could travel to the mines

You could go directly to the mines where you can see the difference between round holes in the ground with no support, and round holes in the ground braced by wooden shafts. The road to the mining area is essentially unmarked, so you’ll need a guide and a 4WD vehicle. Another option would be to hire a driver who would take you up the mountain road in the back of a big truck outfitted with benches. Splitting the cost that way would work nicely if traveling with a group.

But if you aren’t able to speak to the locals in “Dominicanese” (i.e. the regional Spanish accent), the intercultural exchange benefits might be a little thin. When the hotel proprietor advised us not to go up to the mines, I asked her why? She shook her head vaguely said the trip was hard. When I pressed her further, she said that when her guests see the conditions the miners work under they want to take all their Larimar back to the shop. She was dead serious.

You could visit the museum

The sanitized version of the experience is a visit to the Larimar Museum at Km 18 on Carreteria Barahona-Paraiso in the small town of La Cienaga. You’ll see a life-size colored photo of smiling miners holding a stone sure to be rated AAA+. Several raw stones from the mines are on display, as well as jewelry created by named artisans. The jewelry is no cheaper in the museum store, of course, but the guarantee of quality may be a deciding factor when compared to buying it on the street.

The nearby Craft School (Escuela de Artesania del Larimar) is a lapidary shop where the Larimar stone is polished, shaped, and set into jewelry. You can arrange in advance for a tour between 9 and 5, weekdays only.

You could go to the shops or peddlers

You can find it on every corner of the Colonial Zone in Santo Domingo, as well as in the better shops across the island. If you want less expensive grades and settings, the peddlers on the street also offer a wide assortment.

You could pick it up on the river bed

The most fun is to pick it up for free on the beach. The Bahoruco River carries loose stones down from the mountain and washes them into the sea. Even unpolished, the bits of blue sparkle in the wet rocks and sand. I was always in competition with the sea, however, and quite often I lost. I’d spy a sparkling azure stone one minute, reach for it, only to have the next wave snatch it away. 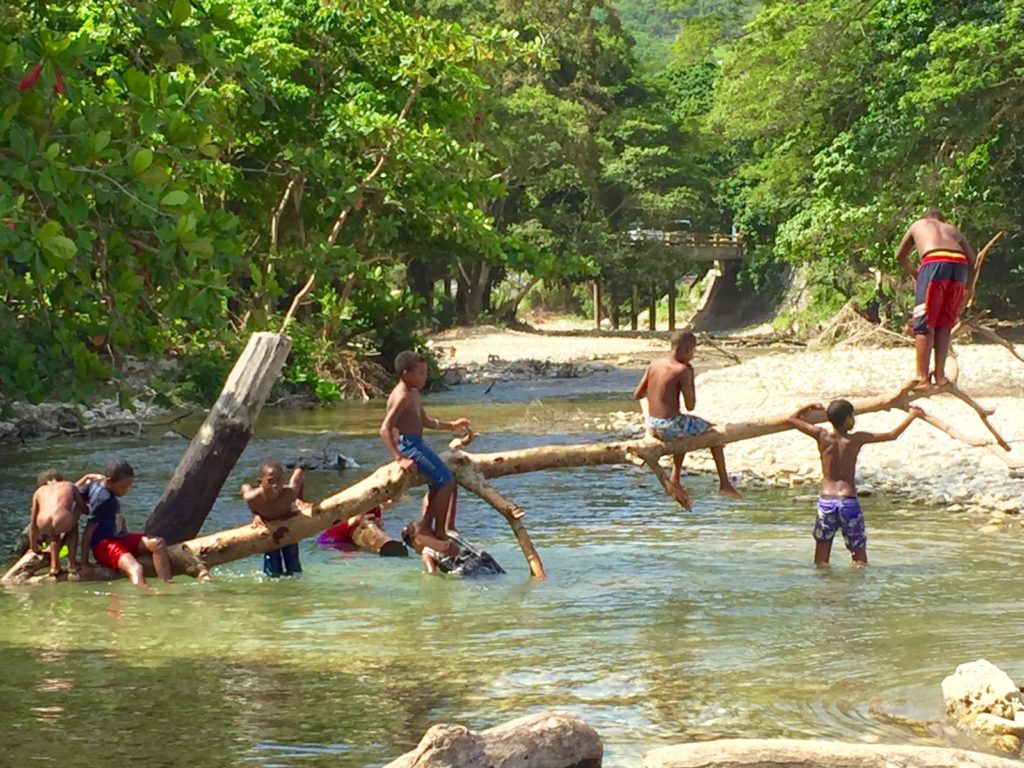 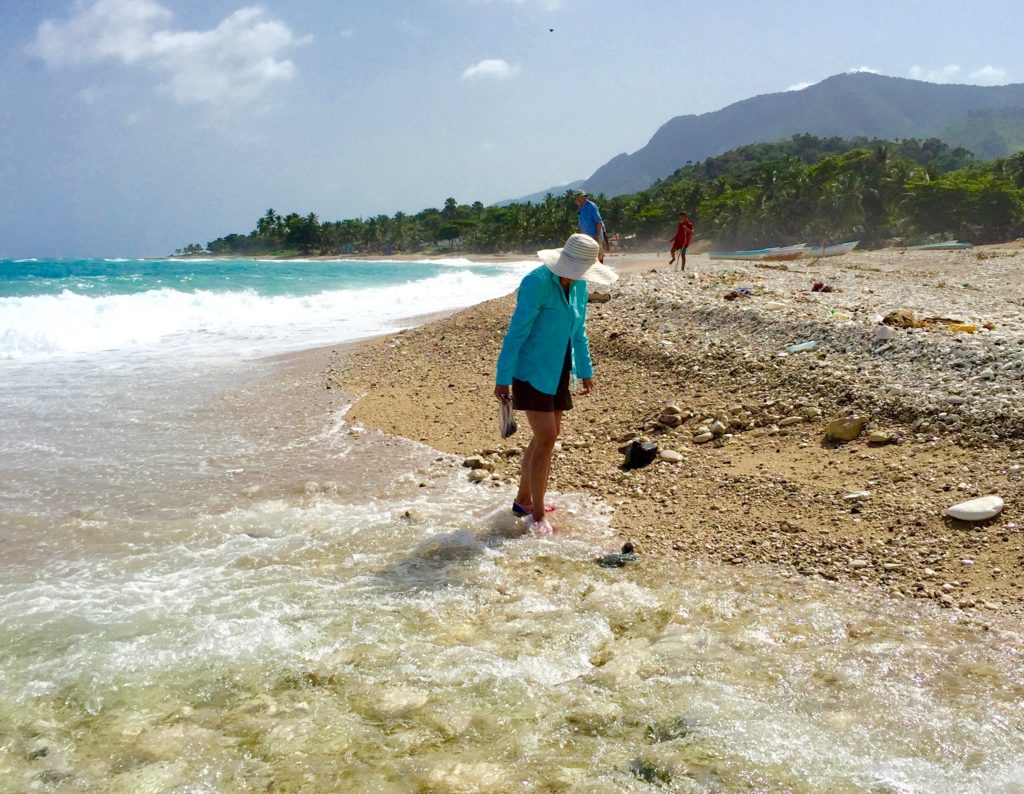 These little boys were happily playing while we hunted through the rocks for shining blue bits. A few minutes later their entrepreneurial instincts pricked up. Tourists! We watched  how they scattered across the beach, scavenging for the blue bits of rock. They’d come to us victorious with little hands full of it.

You could buy it from a local

When we arrived, this woman was hanging face down in a pool of the Bahoruco River just before it empties into the sea. A little later she showed us the fist-sized rock she had found which contained an intensely blue center of Larimar that would likely prove to be high quality. She offered to sell it to us, but . . . . 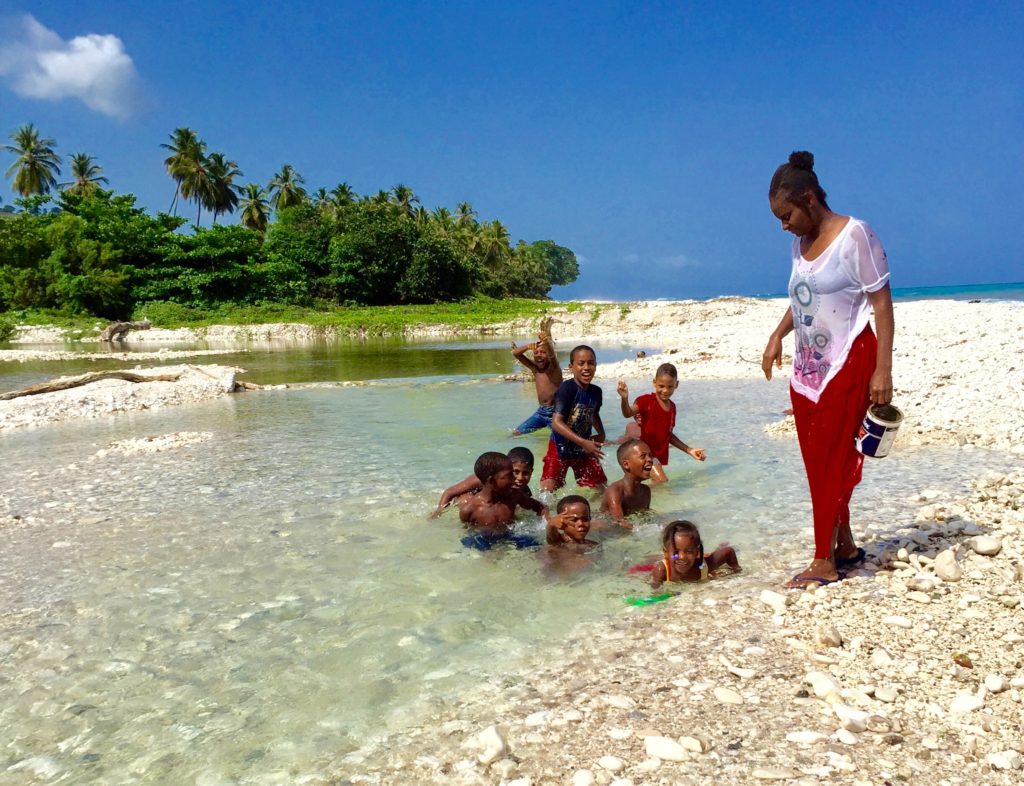 Larimar from the Baharuco River

These happy faces belong to Larimar scavengers after they’ve been paid by the tourists. FYI, be sure to take lots of coins and pay each little hand that brings you a clutch of stones — I doubt the boys have any way to split a paper bill equally amongst themselves. Whoever snatches it first, gets it. 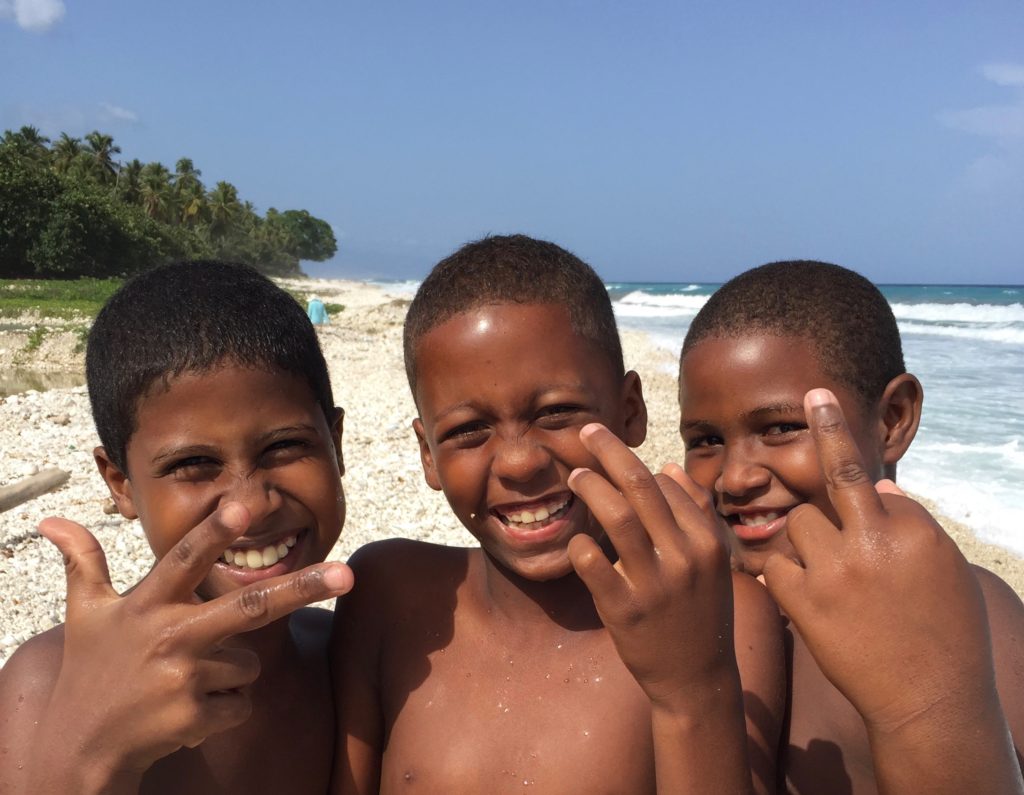 One little fellow, completely naked but wearing a big grin,  handed me a round river rock. Was he testing my Larimar detecting skills? Or was he saying that the smooth grey rock is beautiful, too? I paid him a peso for it. Can you tell which rock it is? 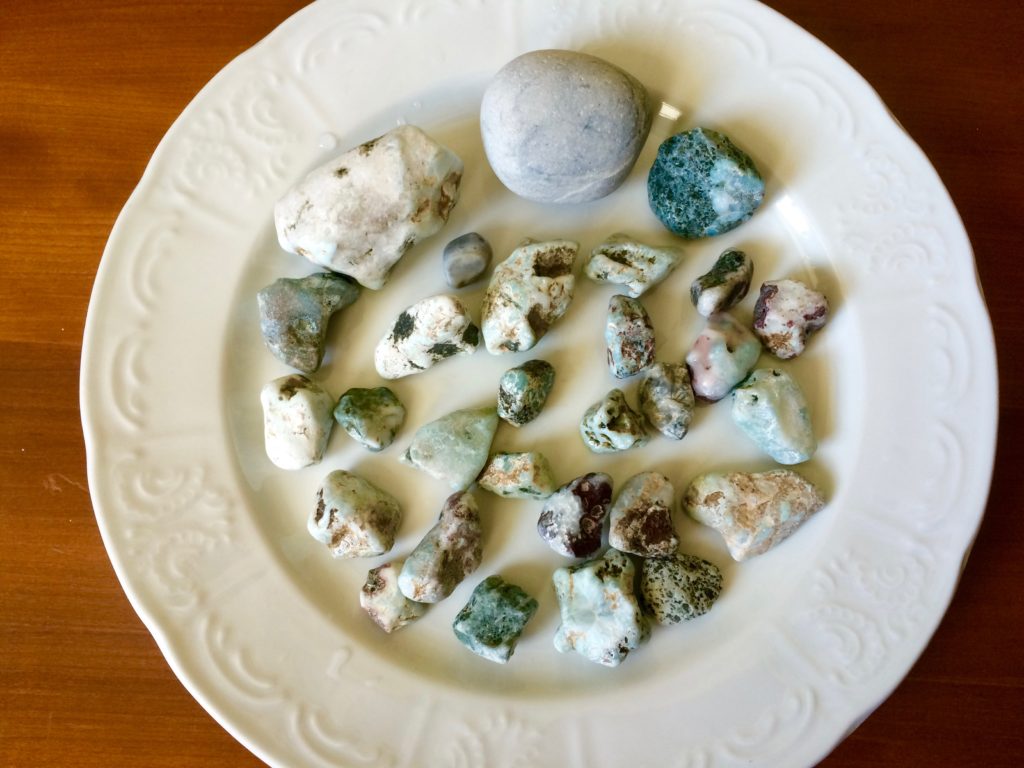 Can you spot the river rock?

I’ve made a little zen garden, don’t you think? It’s not random; I’ve sorted the stones into three groups. The lower quality along with the grey river rock are pictured above. Below are the mid-quality in water to better show the color, with the bluer beach pebbles moved to the lower edge. Not yet sure what I’m going to do with them. 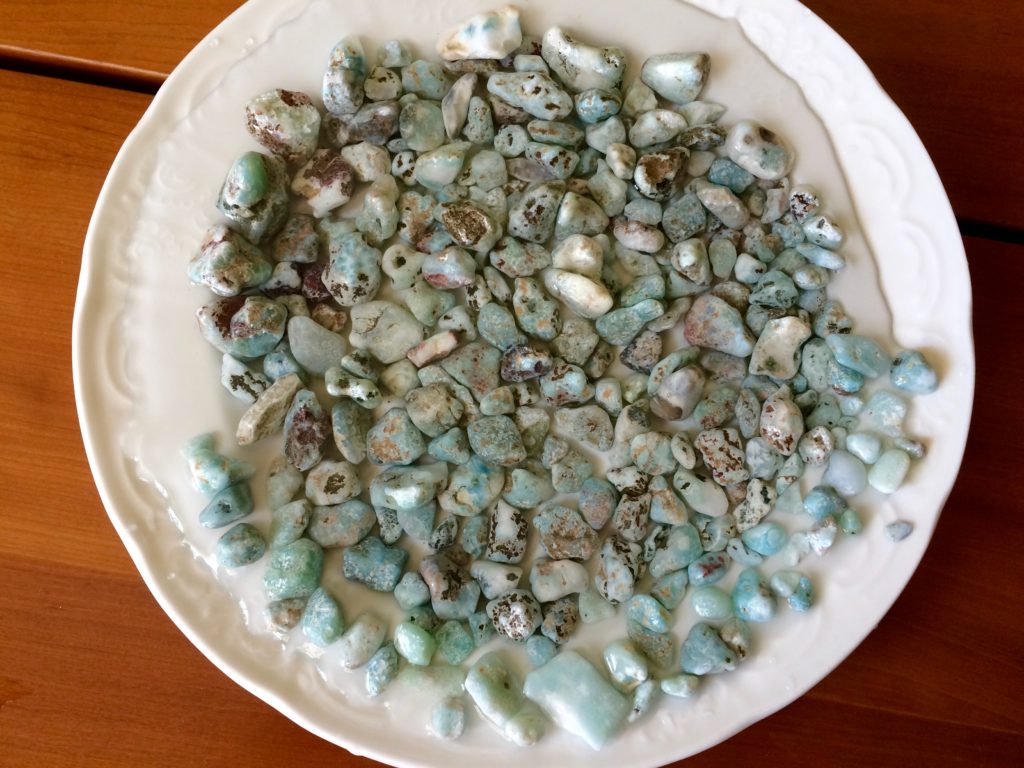