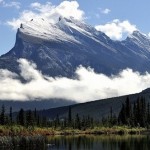 I just returned from viewing the Banff Mountain Film Festival at a local university. All three hours of it.  The energy level in the room could have powered the projectors! Many in the audience were buzzing with excitement from having seen the first night of films, since the festival comprises different presentations on two consecutive nights.The 2015-16 World Tour festival is celebrating forty years of amazing feats of photography and sport. If you haven’t seen this film festival recently, go to <youtube.com/thebanffcentre> where you’ll be able to see 11 videos released for the 2014/2015 World Tour.

The old saying that “a person who doesn’t read lives one life, but the person who reads lives a thousand lives,” is also true for a high-octane film experience like the Banff Mountain Film Festival. I eagerly entered the auditorium looking forward to the fine cinematography I’d experienced other years. But as I took my seat, it felt for a moment like time was playing a trick on me. Maybe you have to be a senior to appreciate the fact that not one of us feels “old.” We’re all young and athletic, but trapped inside increasingly unresponsive bodies. It’s kind of a surprise every morning. We go past a mirror and experience a moment of “who’s that?” So, imagine my feeling of imbalance when I looked around the audience and realized my friend and I were the only grey-hairs in the room! The rest were buff and in their prime!

I’ve attended the Banff Mountain Film Festival for a number of years, and I think the films submitted now have a more refined human-interest element to them than those I remember from earlier years. Case in point: the night opened with a film about three men from Colorado whose errors in planning and executing a trip to Mexico, where they scale the third highest peak in the Rocky Mountain chain, are funny from beginning to end. It wasn’t the slick Hollywood style of humor either. The audience saw the event unfold from one disaster to the next, each artlessly amusing.

I’ve read (and seen) hundreds of anthropomorphized dog stories and was less than excited at the prospect of sitting through another dated talking-dog story. “Denali” smashed my preconceptions. We see the man, Ben, and his dog frolicking in beautiful surroundings while in the pink of health. When cancer strikes Ben, we see him on a hospital bed, limp, with dozens of tubes attached and Denali curled up beside him. Then we see Denali suffering from cancer, a stiffened old dog that Ben lovingly carries to revisit places they had earlier enjoyed.

In pursuit of an eclipse of the sun, we meet the photographer and pro-skiers who visit the extreme north in order to photograph the rare event. The accompanying story-line involved athletes and artists who were willing to be seen as flawed and vulnerable, thus creating significant doubt in the viewer as to whether their unlikely quest to photograph a skier in the arc of the eclipse was even possible. The tension heightened incrementally so that as the moment of the solar eclipse approached, we were acutely invested in the group’s success.

The night closed with a longish film about two young men who hike the seven-summit traverse of the Fitz Roy massif in Patagonia. We meet Alex Honnold, whose wife and baby boy wait with him for the break in the weather that will allow a climb.  This young father’s love of climbing with all the dangers it presents, collides with his love for his family in scenes of poignant reflection. His climbing partner, Tommy Caldwell, infuses life events with such buoyant happiness that despite the hardships of the climb, every moment we can be with Tommy on camera feels like balm to the world-weary soul. A riveting tale because of the people involved!

There were many other films that I loved. All demonstrated phenomenal photography and athletic skills. But the best of the best were those in which we met people whose struggles mattered to us. So much of “reality” TV feels contrived and involves the mean-spirited and selfish aspects of mankind. I’m sick of despising those characters after five minutes of watching them.

The Banff Mountain Film Festival is different. These images and stories capture the extremes of artful photography and honed athleticism. Their art explores the power and the joy of physical and intellectual achievement. There’s an undeniable spiritual dimension to the films. 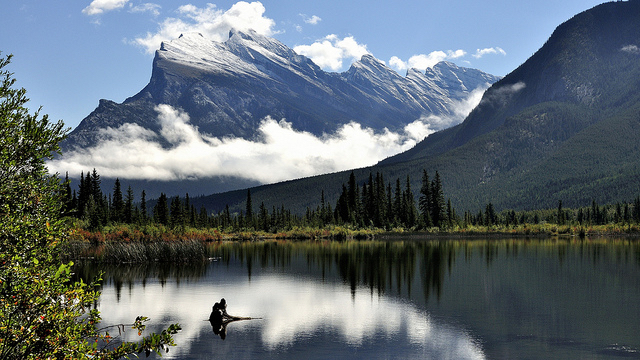 I felt true joy from seeing through another’s eyes (and camera lens) the beauty of places I will never see in person. The truth is that the day I viewed the Banff Mountain Film Festival I had just finished a week-long disaster with a particular medication and the pain made walking difficult. But I was determined to attend at least one of the nights.

For three hours  I felt genuine exhilaration from observing how beautifully-toned young bodies seemed to defy fear and gravity. I was transported past the limits of my own body and my own life. This could not have happened had the films been slickly edited versions of one death-defying stunt after another. No, it was the people that mattered. I ached for their pain and hoped for their success. I adored their humor and wanted to hug them good-bye.