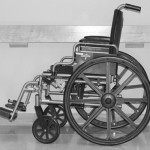 If I had to do it all over again, knowing what I know now about my arthritic knees, I’d never have waited so long to undergo a double knee replacement.  The debilitating effects of arthritic knees sort of crept up on me. Figuring out what was wrong with my body took time.

When I discovered I was going to be a single parent to a household of teenagers, I wanted to connect with them through some kind of traditional family activity. I was doing a Ph.D. at the University of Alberta at the time and backpacking in the Canadian Rockies seemed like a really good choice. Buying the gear for everyone wasn’t cheap, but I reasoned that at least there wouldn’t be the chair lift fees like when we went skiing other years.

The first indication I had of trouble with my knees came on a trail with relatively low elevation gain around the west side of the lake in Waterton Lakes National Park, which joins Glacier National Park on the U.S. side. I was hiking with my youngest daughter who was about thirteen. I wanted to make sure she would enjoy the experience, so I loaded the tent and anything else that was heavy into my pack. We got half way around the lake to the Canadian/U.S. marker when the pain in my knees was so excruciating that I thought I couldn’t go on. I rested awhile and the pain subsided when there was no weight on my feet, but it took a lot of will power not to pray for a helicopter.

Back home I found a sports doctor who prescribed a topical ointment that was only available in a few countries. I was disbelieving, but I used it anyway. It worked and the pain subsided for walking purposes.

The next year we hiked the Tonquin Valley near Jasper, Alberta, and I made sure the load was evenly distributed amongst the five of us. My kids teased me a lot about how good-natured, even jovial, I became after a few doses of Tylenol 3, which is an over-the-counter drug in Canada despite containing codeine. That stuff really cuts the pain. Even so, I knew my backpacking days were over unless I could find a major solution.

That winter I lost fifty pounds, and that was the help my knees needed. The weight-loss probably bought me ten pre-implant years.

By that time I was teaching at a U.S. university and under the care of a good sports medicine doctor, but experiencing increased knee pain. X-rays showed that I had bone-on-bone grinding in several places in the knee joints. The doctor was reluctant to do a knee replacement, however, because he said I was too young. Knee replacements were becoming increasingly more sophisticated, he said, but no one knew how long the newest implants might last. There was no guarantee I wouldn’t have to have the operation redone several times in the remaining years of my life. So I took the doctor’s advice to wait.

My university named me as Exchange Professor to a university in China for two years and I loved the experience. I’m never so happy as when I’m in a foreign country learning how other people experience life. But for those two years, the pain was intense. I took the maximum dosage of painkillers, but it was never enough. Besides, I knew the drugs could potentially damage my kidneys and other internal organs.

I could get a little relief on long staircases by having a colleague walk one step below me, my hand on his/her shoulder, which seemed to relieve a little of the jolt of gravity. In a museum, the only way I could enjoy the exhibits while standing on cement floors was to use a wheel chair. When I returned to the U.S. I told my doctor that either he could schedule me for a double knee implant, or he could put me in a wheelchair. Pain was no longer a lifestyle option. One way or the other, I was done.

When spring term ended at the university, I had both knees replaced at the same time. It was quite awful. But if I’d only had one knee done, it wouldn’t have helped much because the other knee was too painful to help me walk. Besides, I’m not sure I’d have had the guts to do the operation a second time.

Since those years in China a decade ago, I have traveled pain-free to many countries of the world. I plan on extra time for airport security scanning, but after a few times I’m completely used to it. Getting rid of my arthritic knees gave me back my freedom. I can now walk as long as my children can. My legs or feet or back will start to ache before theirs do, but my knees don’t hurt. Ever.