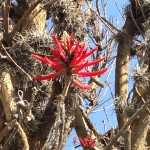 We arrived in Mexico City on a lovely warm evening in mid-February to begin an archeological tour of Mesoamerica. We had just missed the 6 PM cut-off for the buffet in the restaurant a few blocks from our hotel, so ordering dinner in Spanish became our next hurdle. My friend tried in fledgling Spanish to explain that we didn’t want anything too spicy. The waiter heard “hot” and thought temperature. So he referred us to a page of salads, which we had been warned to avoid in Mexico.

After struggling to communicate with the waiter’s supervisor, we pointed to a picture on the menu and got exactly what it showed. I pointed to the word for shrimp, and said “not hot.” (I needed sleep more than I needed a flaming esophagus.) What I got was half a dozen limp shrimp on a bed of crushed ice. The couple dining with us pointed to a phrase on the menu that they recognized, then to each other to indicate that they wanted to order the same thing. What they got was one plate to share between them.

Blurry picture of the mariachi band at the restaurant

That’s about how blurry my eyes were too, the first night in Mexico City!

As we watched couples dancing while we waited for the food to come, I was startled by a soft voice coming inches behind me over my left shoulder.

I turned to see a little girl, her hand thrust between the black iron bars that separated the restaurant from the street, displaying several small cloth dolls. Her mother stood close by holding a sleeping baby snugly attached to her with bands of cloth.

With the little hand out-held, the little girl’s eyes so hopeful, I couldn’t resist. I wanted to buy everything in the basket as some sort of misguided, voluntary tourist tax, I suppose. Instead, I thought of my small granddaughter and bought a little doll for her.

First needs in a foreign country tend to be practical

Our first and biggest need was how to arm ourselves with enough bottled water for the day to come. A convenience store near our hotel had a supply of water in small enough bottles to carry, but learning the value of things and the subcategories of the peso took a little time. I wish I’d practiced using the currency a little before I left home. [Note to myself for next time!]