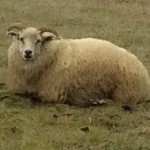 The animals of Iceland, so popular with tourists, comprise a fairly limited set. Puffins, whales, sheep, and horses are probably the most commonly sighted. I’m fascinated, however, by the claim that at the time of the first Norwegian settlers in AD 871, the southern coast of Iceland was forested and filled with animals that seemed almost tame. The game birds, for example, had no fear of man and were so easy to catch that it seemed as though they were offering themselves to help the settlers survive their harsh new homeland.

The violent volcanic eruptions of recent times, however, deforested the southern shores of Iceland and the game vanished with the trees. I’m told that game birds are still around if you know where to look, but I never encountered any on our walks. Similarly, Arctic fox are prevalent in remote areas such as the Westfjords, but I’ll have to make a return trip to see one.

Icelandic sheep, on the other hand, are everywhere. At first I didn’t realize that the dirty-white rock-like lumps in the middle of a meadow or field were live creatures. I was looking for legs and horns and eyes to tell me I was seeing a sheep. 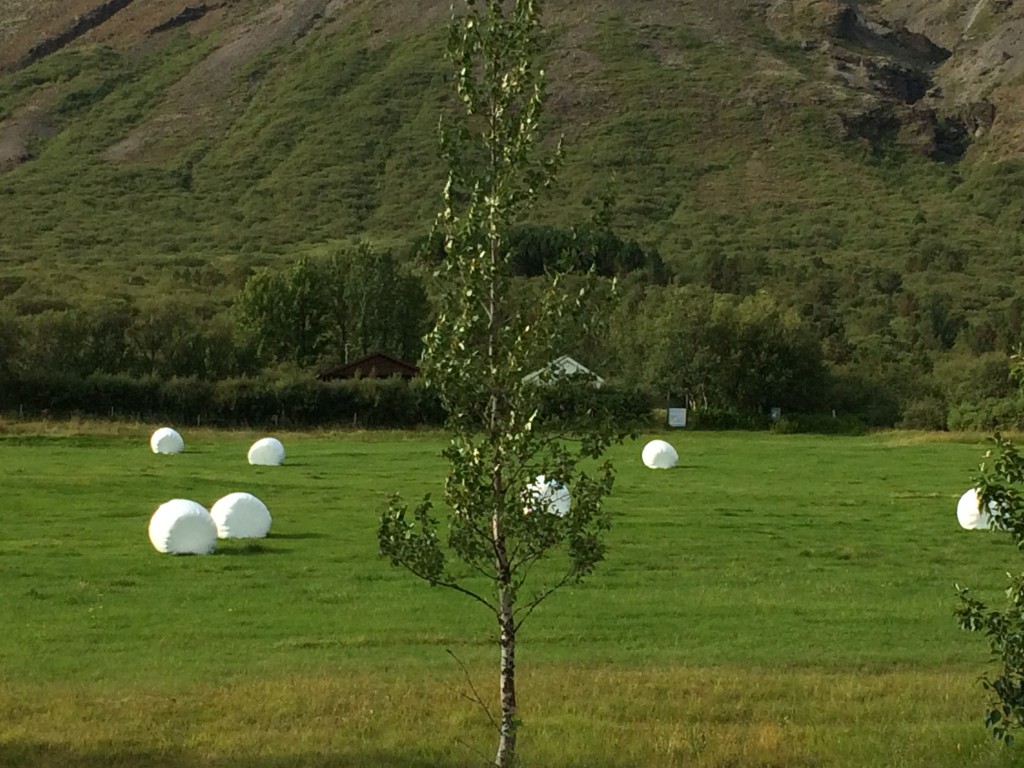 Bales of hay/straw with plastic coverings 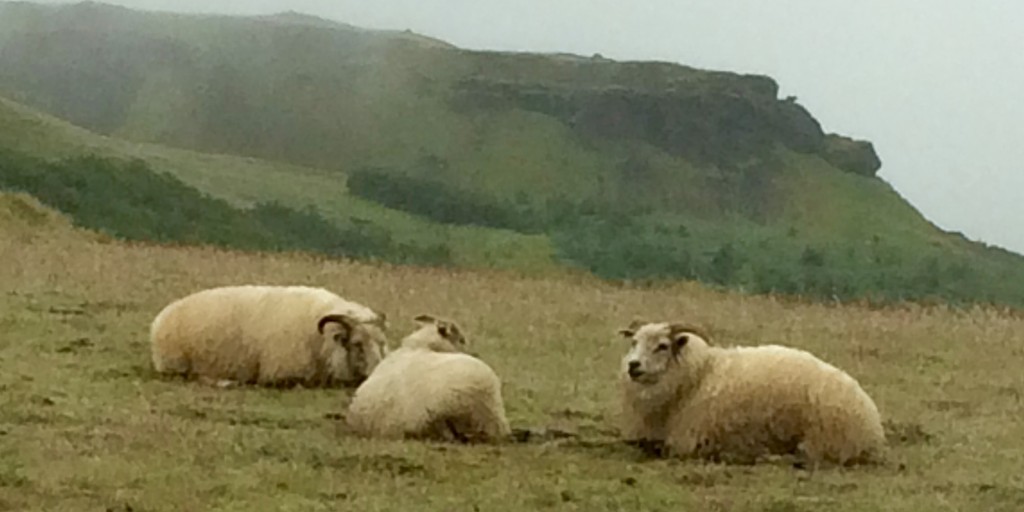 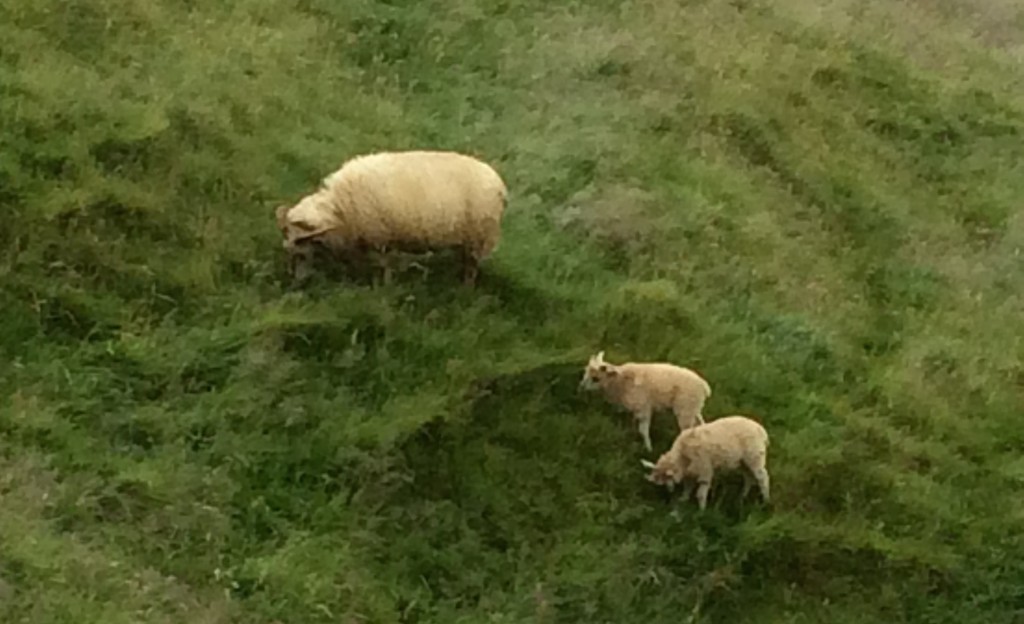 While I was surveying the fields so intently, I  discovered plastic-wrapped bales of hay/straw for the first time. If you live in a dry climate, you don’t think what people have to do to protect a forage crop from rain. But here they are: bales that look like giant marshmallows carelessly strewn about the field.
It wasn’t until we hiked up the path above Skogafoss that I finally saw Icelandic Sheep through the rain, up close and personal.

Meanwhile, at our feet lay jewels in the grass. 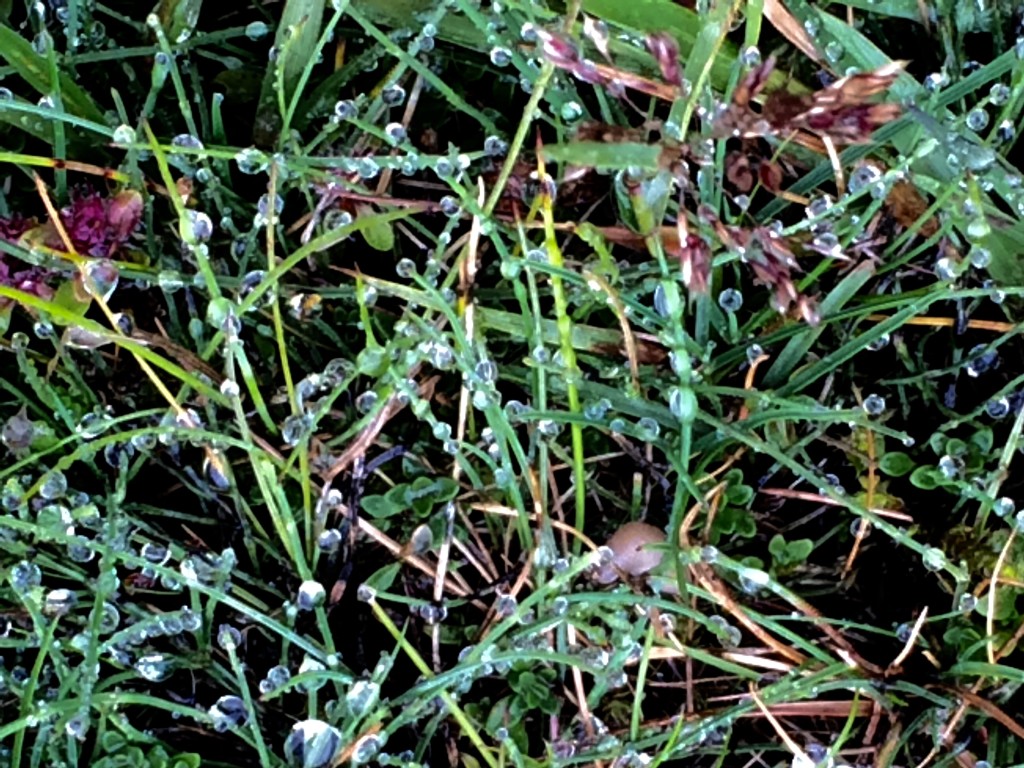 I learned that Icelanders are offended by the term pony. “They may be smaller than other kinds of horses, but they are NOT ponies.” Okay — but to me pony is a term of endearment rather than a belittlement. 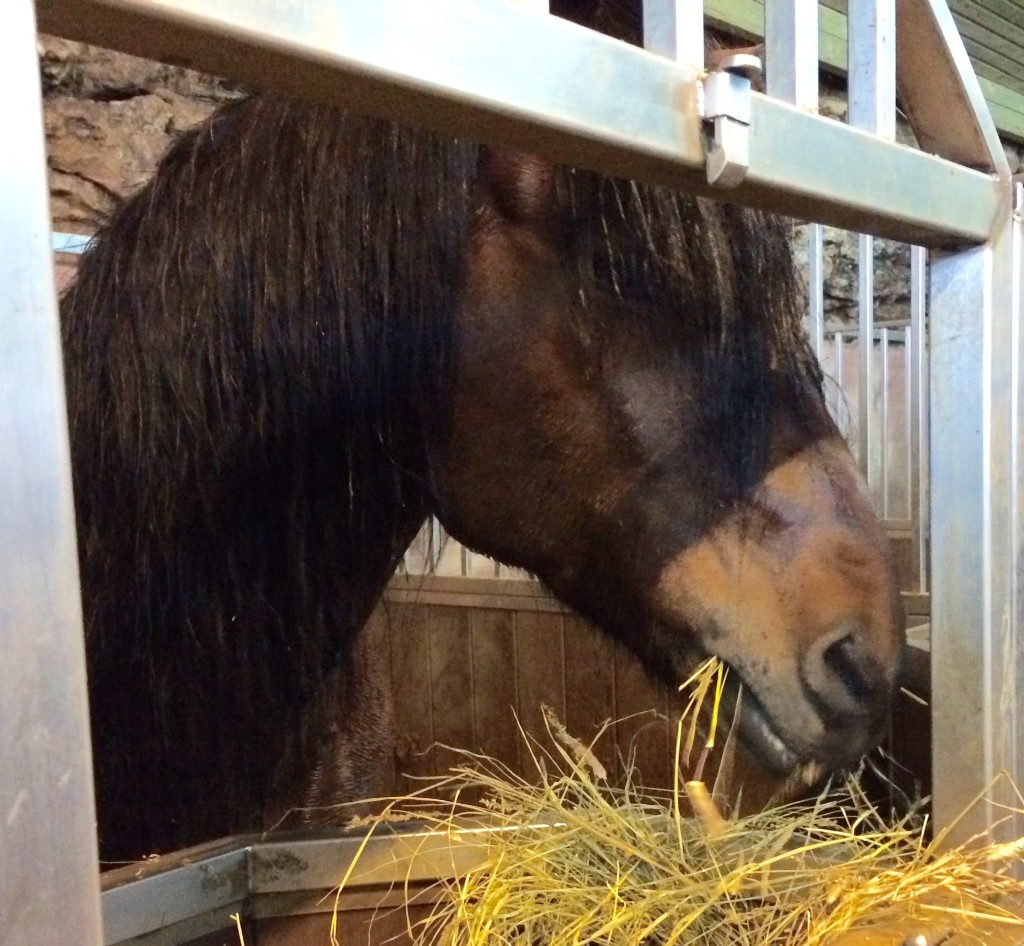 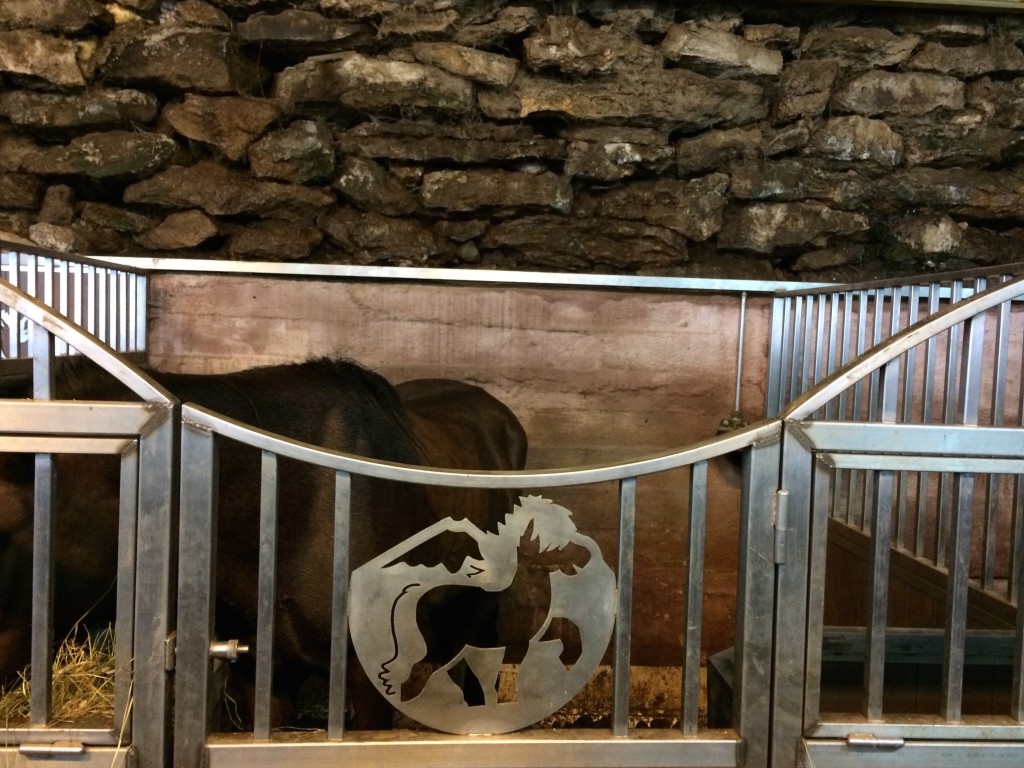 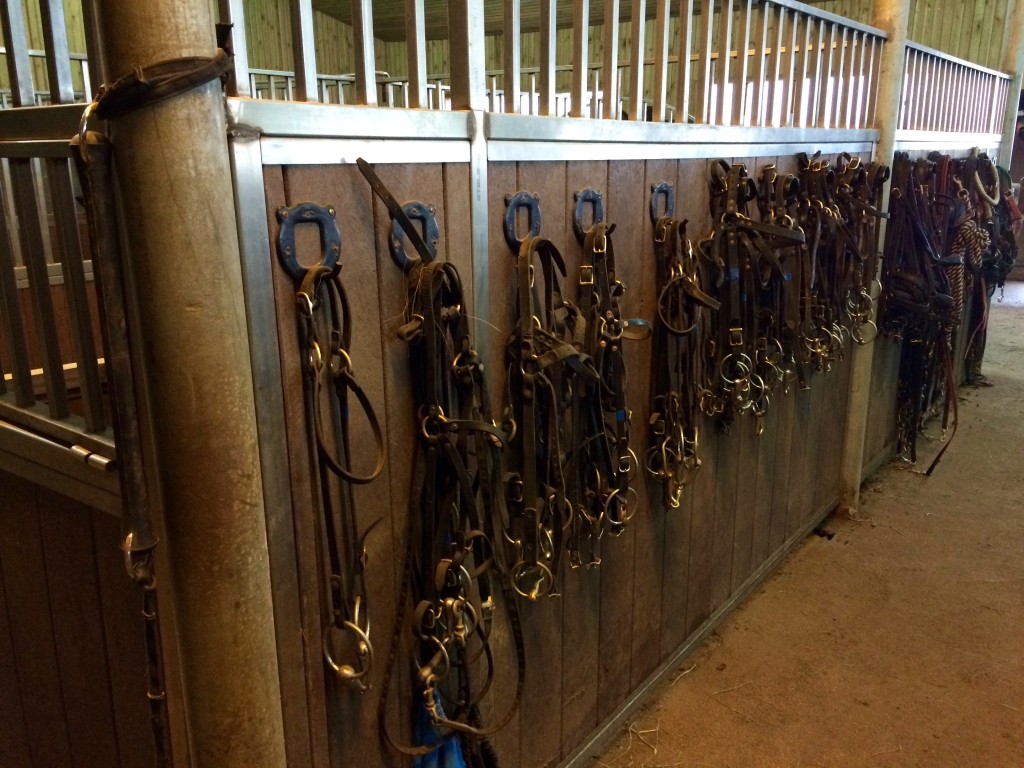 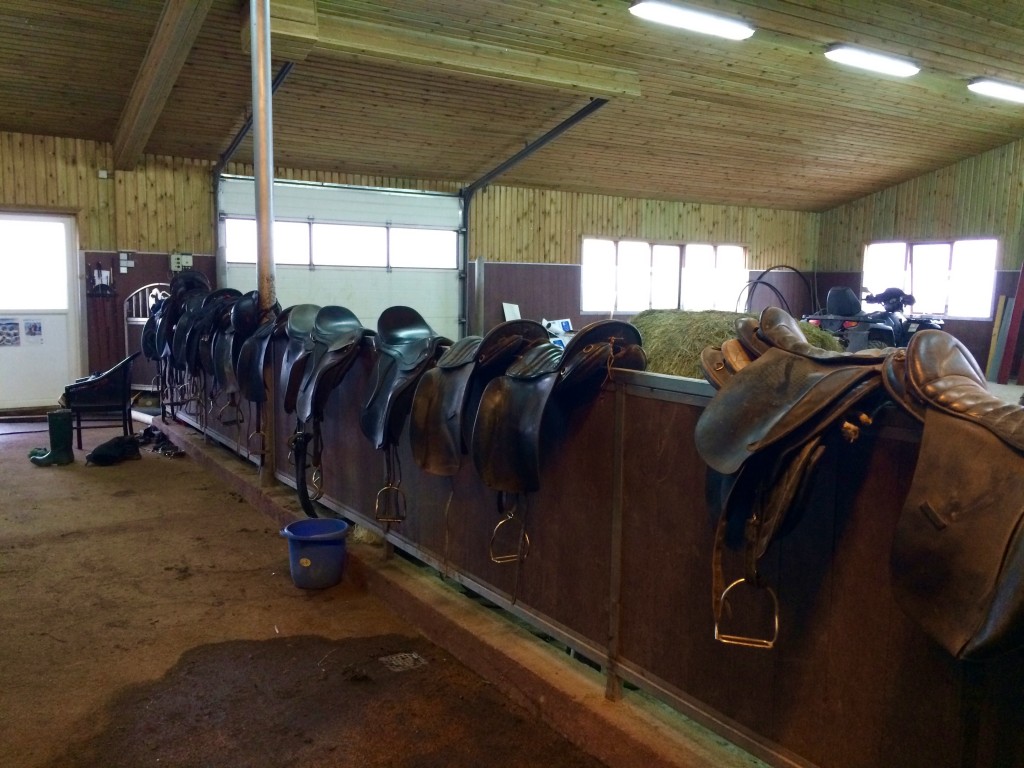 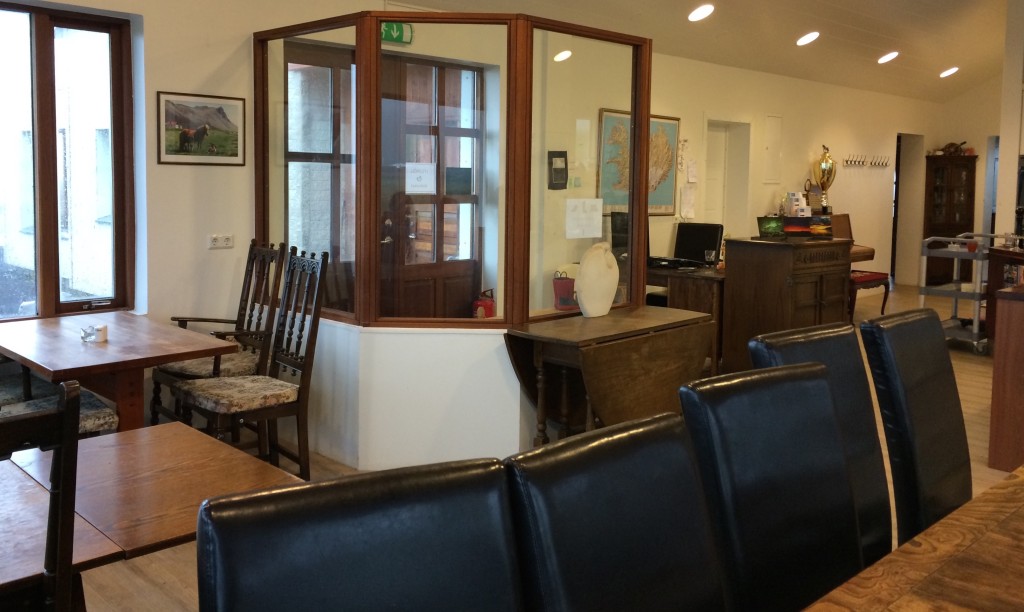 The rain pelted heavily on the car as we drove to the Lysuholl horse farm in the Snaefellsnes Peninsula where I had reserved an hour’s ride on Icelandic horses. I had envisioned a bucolic ride down to the beach with my two lovely daughters. But by 2 PM, the weather was so inclement that riding a horse outdoors seemed like a rather expensive misery. Some of us didn’t have rain pants and others of us didn’t have waterproof boots, so I called off the adventure.

I felt sad. Riding an Icelandic Horse had been a big draw for me as I planned the trip. There is a part of me still willing to second guess the decision not to ride in the rain. Should we have gone anyway? Does one hour of wind, wet, and cold matter compared to having the chance to ride an Icelandic Horse in Iceland?

But there we were, waiting around and hoping the rain would stop. What to do with yourselves on an afternoon when wind  pounds the island? We sat in the dining room at Lysuholl Farm drinking herbal tea and playing Rummy with borrowed cards. Well, that’s good, too.

We watched seals swimming in Jokullsarlon Bay one afternoon, and the next morning we watched them feeding as the tide came in from the ocean. I’ve already written about the phenomenon of water flowing two different directions in one creek-bed in my blog entitled “Iceland’s Water, Liquid and Solid.” You can find a video of the seals embedded there. They’re fun to watch, so enjoy!

Our pleasant introduction to Iceland’s bird began in Reykjavik.

At Vik we saw birds galore, winging in huge arcs on the air currents. This is the cliff they came from, high up where the rain obscured my vision. 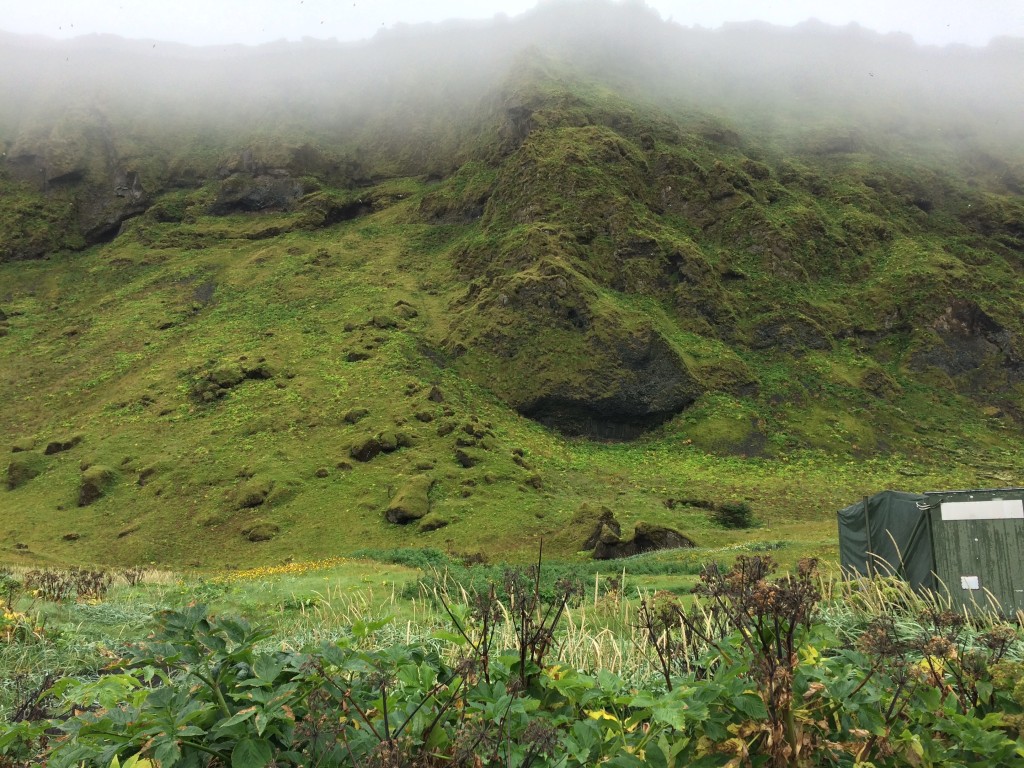 Some were definitely puffins, but I’m not birder enough to name the others for you. I could draw for you the arcs of their flights though, from the cliff over the sand or over the sea and back again. It would be interesting to record it electronically to see what the exact recurrence pattern would be. I wonder if anyone has ever done that. Probably. 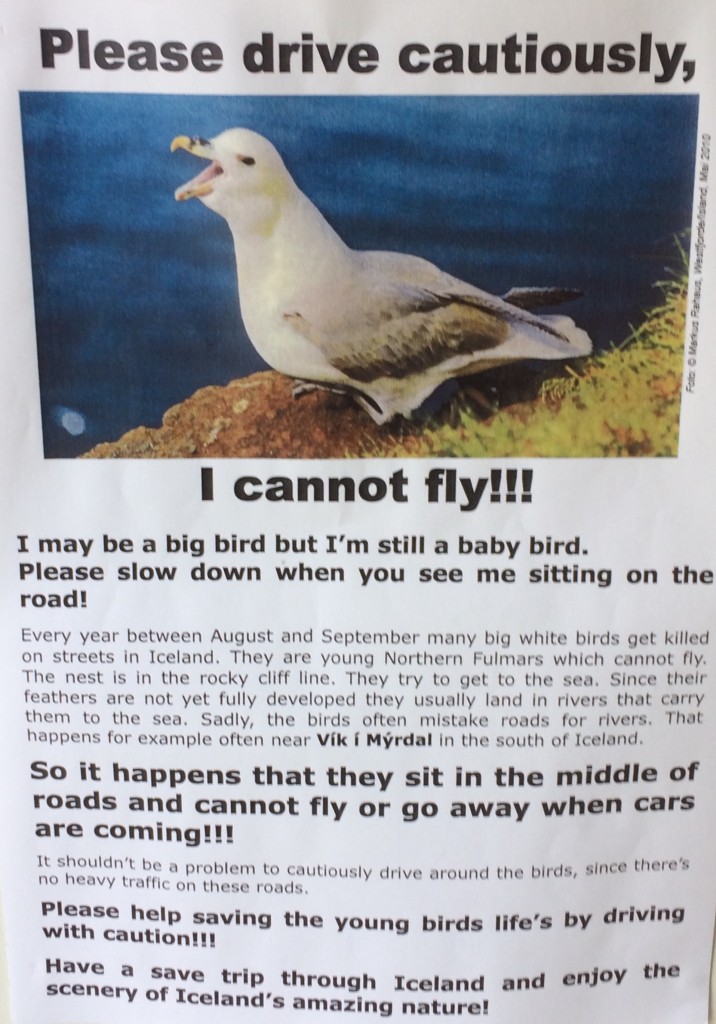 This poster figured frequently on shop doors in the Vik area. We visited Iceland the first two weeks of September, and though we drove the roads carefully looking for large white stranded baby birds, we never saw any.

I promise you the white frothiness means two whales had just breached. You’re just going to have to trust me on this. Sorry!