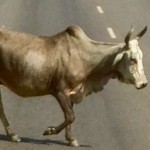 I don’t think the Agra To Delhi freeway would have taken all that long to drive if there hadn’t been so much going on. Truly the Freeway between Agra and Delhi redefines the term. We were told the new road would make short work of the distance, but what I normally envision for the term “freeway” didn’t apply. My concept of a freeway is a long stretch of fairly straight road which is off-limits to animals, foot traffic, and bicycles. Not in India.

There was lots happening all around us on this freeway that caused our bus to slow down or stop completely. The variety of vehicles we encountered ran the gamut from cars and trucks of all sizes and shapes, to tuk-tuks, vans, bicycles, motorbikes, scooters, camels, donkeys, cows, and pedestrians–all sharing the “freeway.”

The term “traffic” had to be redefined as encompassing every imaginable conveyance. Whenever the freeway passed a little town, the traffic from the town seemed to blend into the “freeway,” since there were no real markers as to when one town ended and the other began.

Freeway traffic drove British style on the left side of the road, of course, but the local traffic actually drove on the inner sides of the highway in the opposite direction in defiance of all safety rules. Oncoming trucks didn’t seem to mind which side of the highway they drove on, after all, they had size on their side. 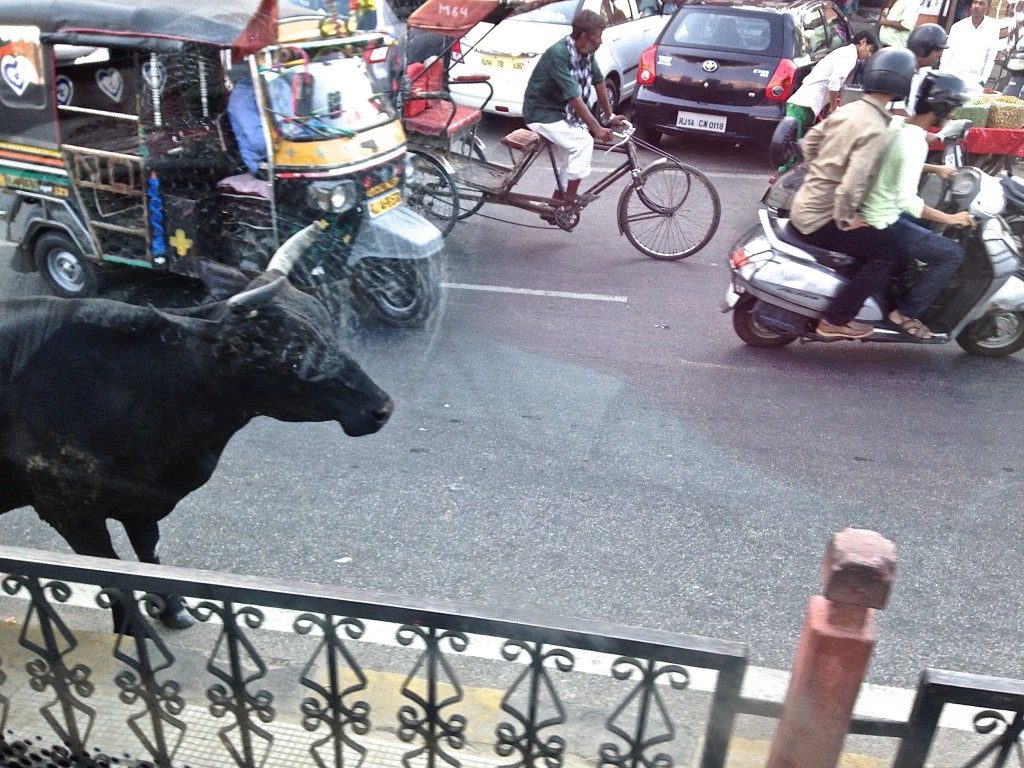 Actually, come to think of it, all of the traffic I had seen in India so far seemed to negotiate their part of the road in complete oblivion to any of the safety rules I had long cherished. Somehow they make it work. They avert head-on collisions, T-bones, and sideswipes through subtle shifts that allow vehicles to accommodate one another in a sort of miraculous fashion. 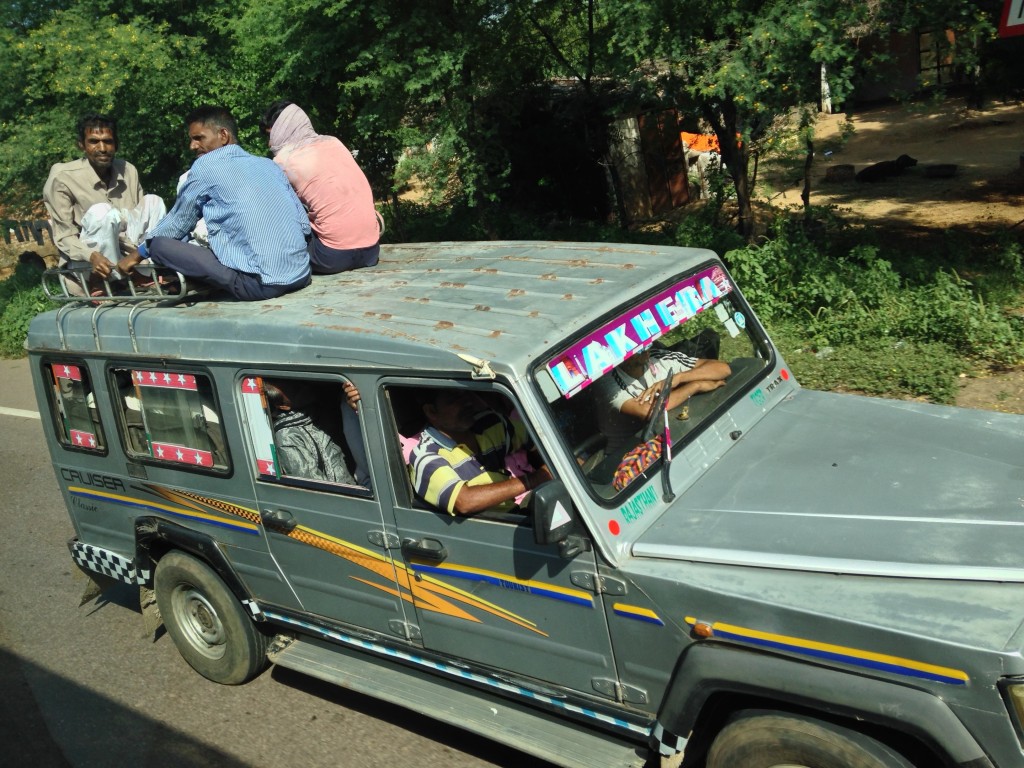 Safety seemed to be less important than getting there.

In the dusty little villages we were used to seeing billions of cow pies laid out to dry in the  sun. But even on the freeway, cow patties were laid out to dry along the center median.

Various types of vehicles frequently sported ten-month-old decoration from a festival that honors the source of a family’s livelihood. If you make your living from your tuktuk, you decorate it as thoroughly as a Christmas tree.

If you make your living from your truck, you place colored tape in strategic shapes and places. The oncoming traffic then sees your vehicle dressed up like an avenging demon with beetled brows. Some of the trucks had so much personality with windows dressed up like eyes and tinsel and fringe fluttering everywhere, that I couldn’t help imagining personas for them.

Who Rules the Road? 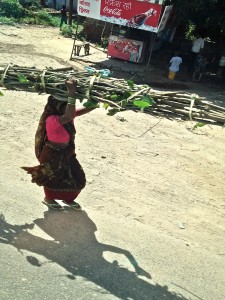 If you saw a herd of Brahma cattle like this, wouldn’t you give them plenty of space?

And what about the bare-footed gypsies with their babies, camels, and donkeys?

But the trucks are bigger!

And what if the town needs to fell a tree and the highway is the best open spot for it to land?

Simple! Stretch a rope across the freeway! 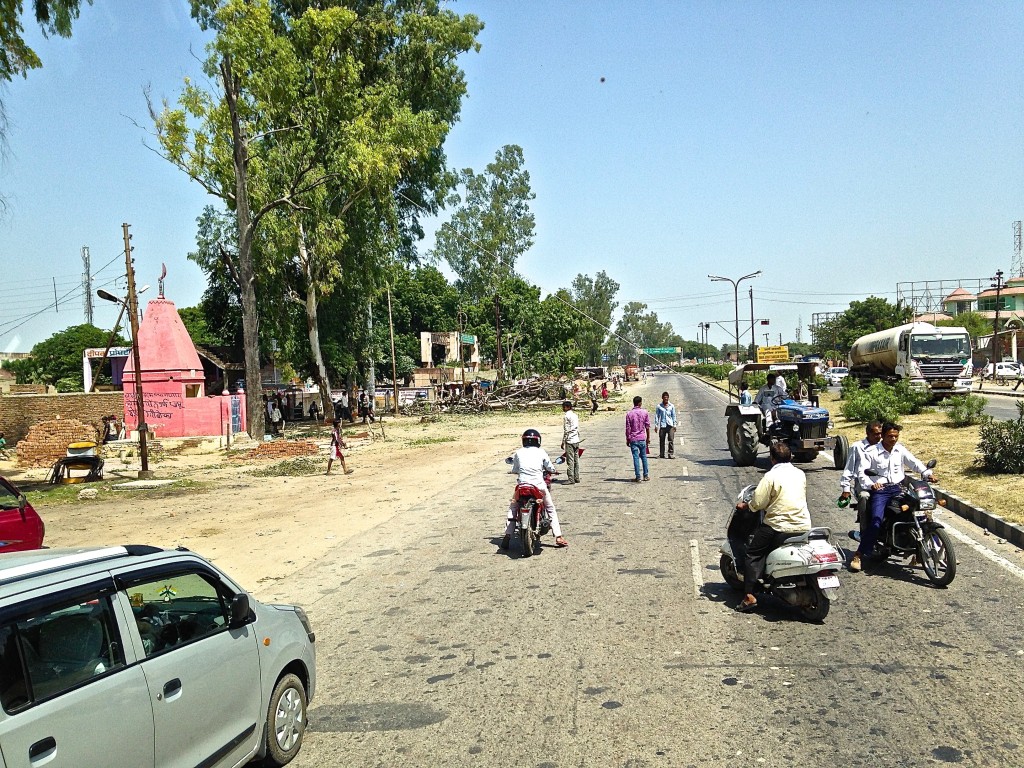 We could see the traffic slowing down ahead and had to wonder, what now? Our tour bus was the biggest vehicle on the road right then, so with the privilege of size we got an up-front look at the felling of the tree. They had attached a rope that stretched across both lanes of the highway to the top of the tree to guide its fall. At the base of the tree, two men pushed and pulled a large saw, one on each end, back and forth. 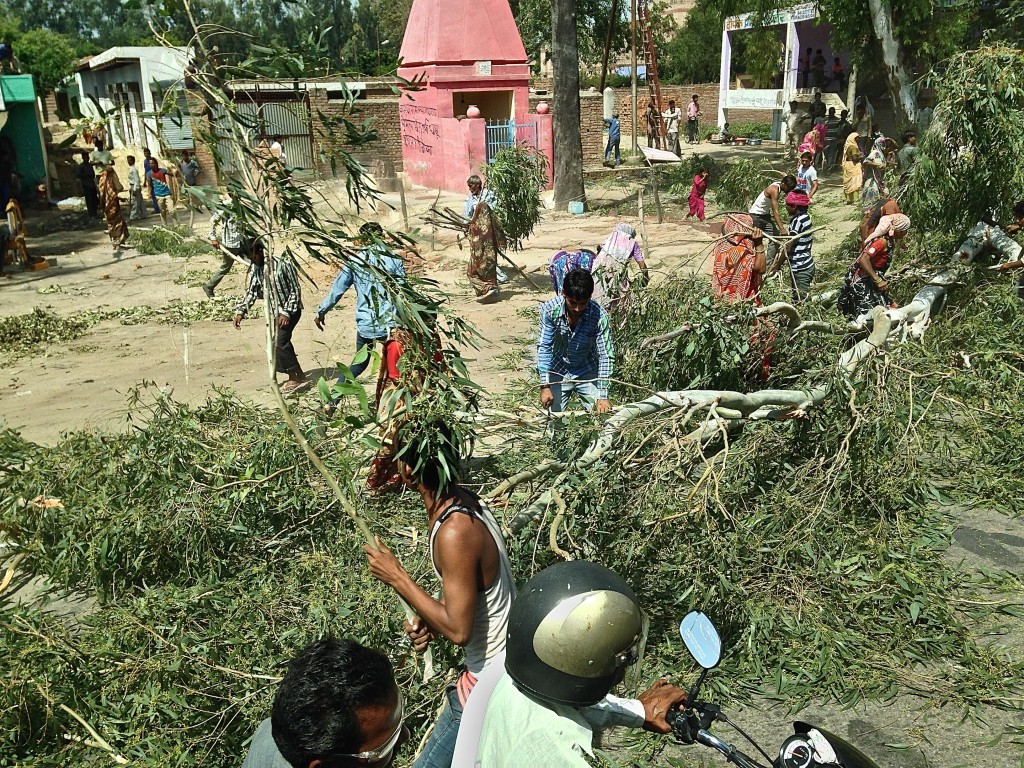 When the tree fell, the most extraordinary thing happened. Seemingly from nowhere, men, women, and children dashed forward to strip off as many limbs as they could. In just a few minutes it was nearly bare. Not enough left of it on the freeway to impair driving. 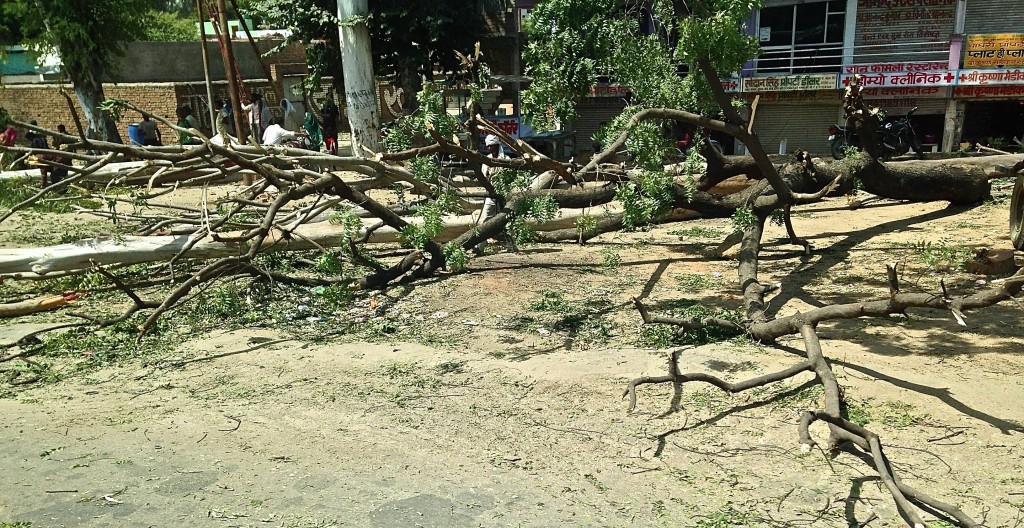 Before we came to India, we had thought the sampler platter approach was good insurance for a first-time trip. The tour description warned us that our nine days in India would be a “fast paced” trip, and it lived up to the promise. We spent three days flying to and from our destination half way around the world, with six days traveling inside India: two each in Delhi, Jaipur, and Agra.

We had wanted an introduction to this large and complicated land full of exotic colors and sounds, languages and foods, all so unaccustomed to the occidental traveler. What we got was an immersion into a history redolent with conflict, a diversity of races and religions, and cultural traditions so rich and varied that these few days in our lives were truly just the briefest beginning to our fascination with India. As we consider our next visit to India, we’ll know better what we want to see and how to explore at a more leisurely pace.

We returned home with the impression that our experiences in India had been a dream, that our lives at home were ephemeral, that our place in the universe had altered. It was as though an expansion had occurred within us that encompassed new levels of reality.